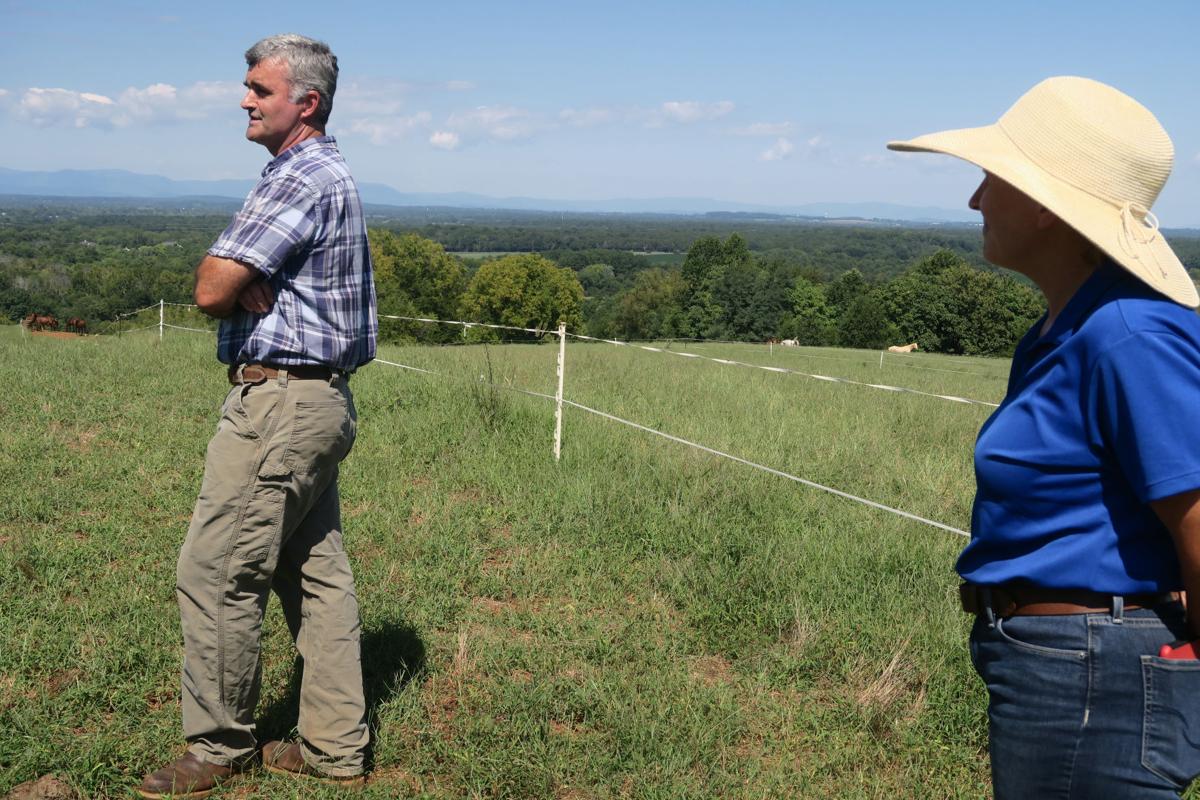 A stallion stands for a photo last week at Greenstone Farm as mares graze nearby. 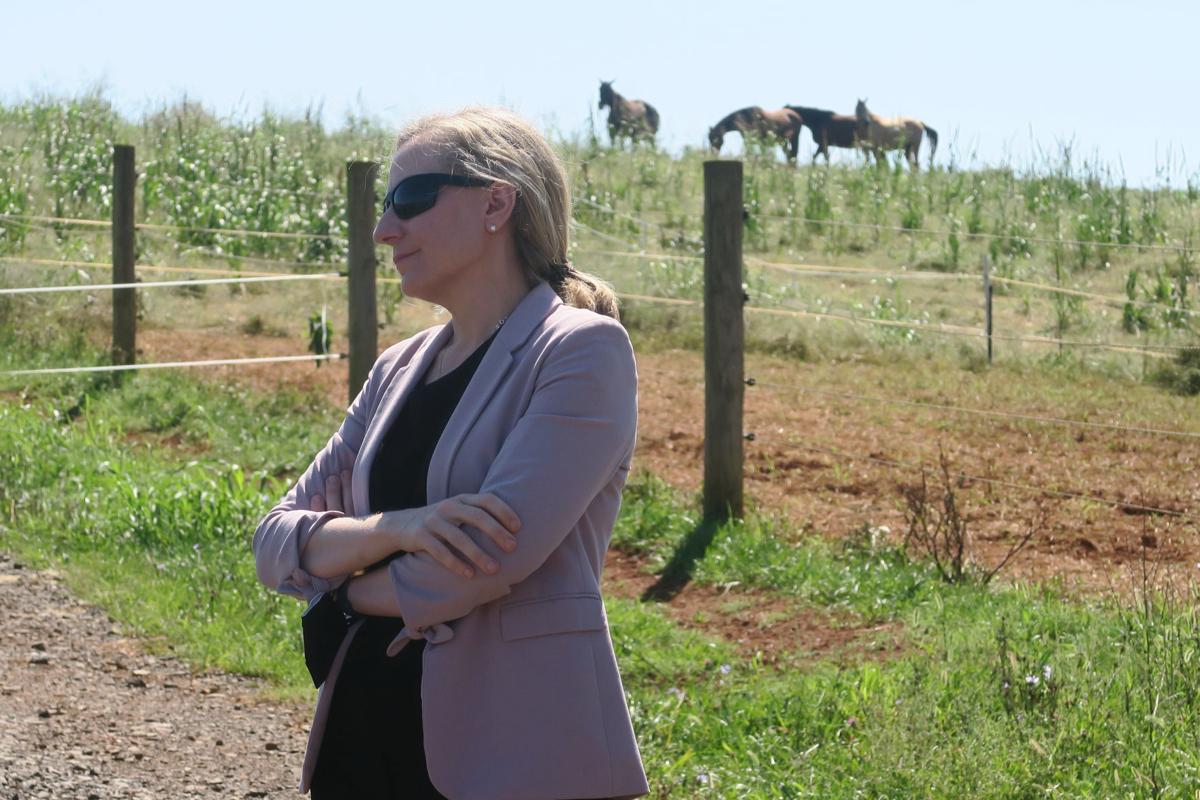 Rep. Abigail Spanberger listens about horse farming during a stop last week at Greenstone Farm, located near the Orange and Culpeper counties line. 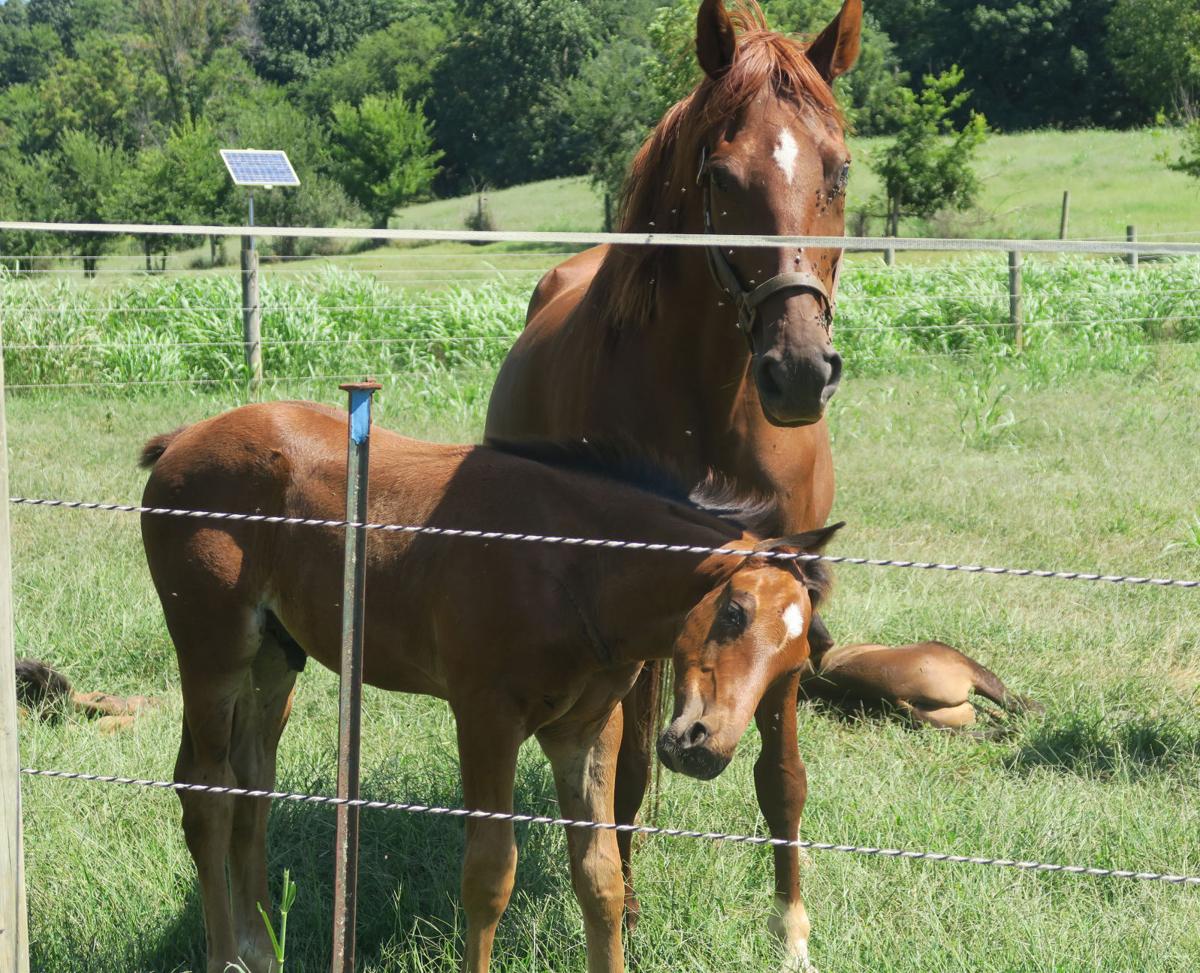 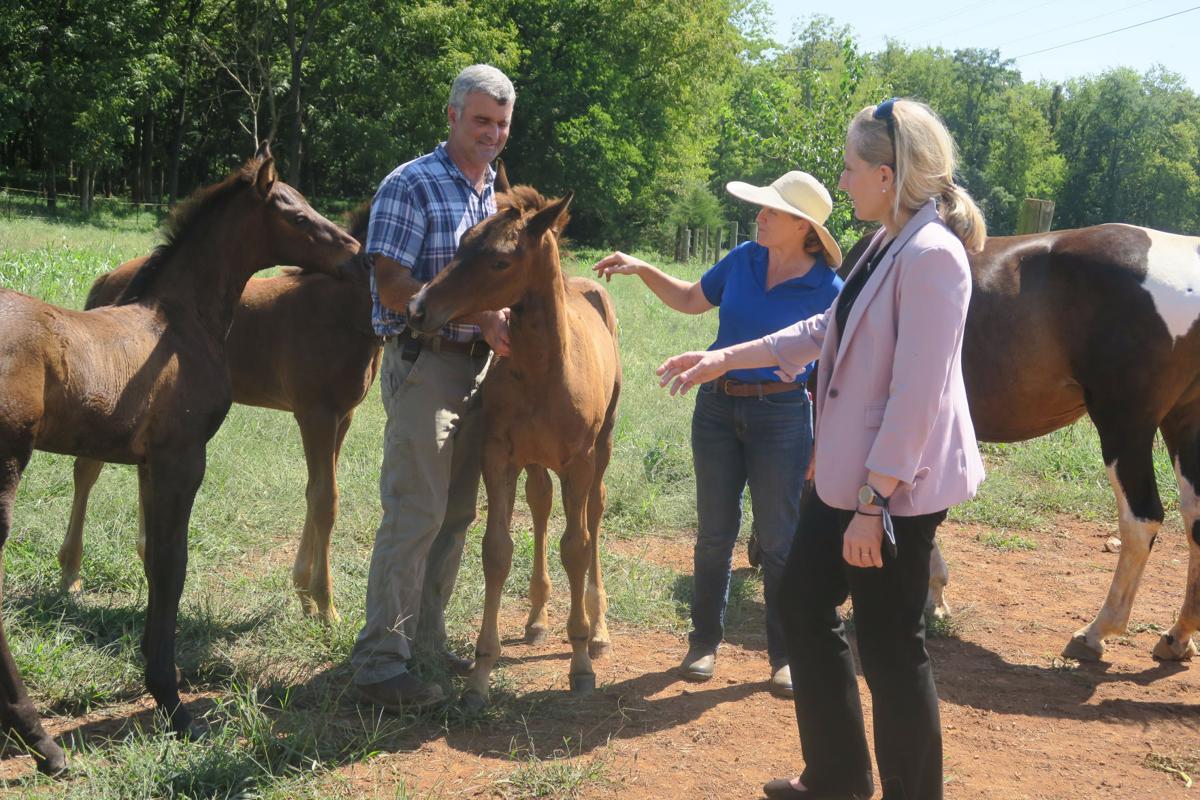 Rep. Abigail Spanberger (right) interacts with horses on the Miller’s farm last week during a tour of local agricultural sites.

RACCOON FORD—Located in a high situation near the Rapidan River with mountain views of Culpeper and Orange counties, Greenstone Farm produces German warmblood sport horses through the hard work of a married couple with four children.

It was the pastoral view that attracted Jim and Carolyn Miller to the 115-acre rolling farm technically located in Orange, but with a Culpeper address visited last week by Rep. Abigail Spanberger as part of multi-site area agricultural tour.

Carolyn grew up in Vermont riding horses and had family in Virginia. Jim planned to move their stained glass business to the property and raise a few horses on the side. That was 25 years ago. What actually happened was equine-focused on a much larger scale.

“It was a sneak attack,” Carolyn Miller said prior to the Sept. 7 visit with the congresswoman and officials from Virginia Farm Bureau, Farm Credit of the Virginias and Virginia Agribusiness Council.

“He didn’t know anything about horses when he met me or that I loved horses … this is what I’ve been missing. Talked Jim into buying the property and we would have maybe one or two horses and here we are.”

Today, Greenstone Farm—named for the rock that covers it—is a successful breeding operation run by the local couple. Over the years, they gained enough experience to learn and implement medical intricacies of horse reproduction themselves including embryo transfer, ultrasound, freezing semen and artificial insemination.

The Millers have their own stallions and plenty of interested mares and have bred as many as 30 foals in a season—the horse gestation period is 11 months.

The couple, in addition, plant and maintain the vast grounds as productive forage for the horses, employing rotational grazing, pasture management and other conservation measures that make the operation successful. They rent another 115 acres for making hay.

The Millers also care for 50-60 dressage show horses grazing in fields of tall crabgrass that get sold as foals. Demand for the animals is high again following a few-month downturn at the beginning of COVID. They’ve not yet raised an Olympian, but their horses have competed at the national level.

The farm is also used for therapeutic riding when there’s not a pandemic happening. The program Carolyn hopes to restart in October, depending on interest, was inspired by their teen son who lives with autism.

“It’s a lot of work, but it does have its rewards also,” she said of life at Greenstone Farm.

They got connected with the congresswoman’s office through Jim’s former association as president of the Orange Farm Bureau.

“A lot of policy makers are urban so don’t really understand the impact of some of the policy they may propose,” Carolyn said.

“The only herd left on the county,” he said of the family dairy industry that like in Culpeper has sharply declined. “Built the creamery, hoping to direct market then COVID comes along. It’s been a struggle, but we’re still plugging.”

Jim Miller agreed legislators don’t always get it right when it comes to farming.

“Runoff mitigation practices appropriate in an urban area are not necessarily appropriate in a rural or farm setting, often it’s just a misunderstanding of things that cause pollution and where those things come from,” he said.

“It’s very easy to say, well farmers use lots of fertilizer and we’re dealing with nutrients in our waterways therefore that must come from the farmers when actually farmers can’t afford to waste any nutrients, the margins are so slim in farming that every nutrient really needs to be used.”

Sales and the art of grazing

The Millers in 2020 expected a much lower demand for their horses due to COVID, and the phones did stop ringing for a few months. They pulled back on breeding, and produced just five foals this summer with another on the way.

“Business-wise, it was nerve wracking just because we count on a certain number of sales of foals to keep the herd size, expect a certain amount of turnover each year,” Jim Miller said. “Not having any income from sales and the prospect of having higher expenses over the winter…more feed, more hay, your expenses go up, your income goes down it’s not good when those things happen at the same time.

“As things turned out we actually were turning people away because we didn’t have anything left for sale. In a lot of ways people started thinking about recreation much more,” he said of an effect of the pandemic.

Greenstone Farm is purposefully run including scheduled rotating of the horses around the property to conserve the land. Horses are very destructive, said Jim Miller during the congresswoman’s visit, and will eat everything around them. In the first few years, they planted grass and in some places it gotten eaten down to the bare ground, he said.

Stomping also strips the groundcover so a rotational system maintains the grass with the horses evenly grazing the land, Miller said. He said he stumbled on rotational grazing as something sheep farmers do.

“We’re now moving almost exclusively to doing a rotation of crabgrass and annual rye grass, both of which will put down enough seed of their own that we are no longer burning all the fuel we were burning, all the wear and tear on tractors and operator,” Miller said. “It’s saving a lot of time and producing a lot of high quality feed.”

Horses are people curious, he added, and will rotate around the interlocking fenced fields with a simple, “Come on, girls,” the horse farmer said, the mares trotting over, their hooves softly padding on the grass. Water troughs get moved around while a lightweight system of hoses activate on a timer.

At night, they fence off the gravel driveways crisscrossing Greenstone Farm and let the horses graze the roadsides.

“It’s not as neatly manicured as a lawnmower, but no fuel burned, no labor expended, working pretty well for us,” Jim Miller said. “We wind up doing very little mowing in the summer and it’s just been a whole lot easier.”

Trial and triumph: plus, that view

As part of the recent visit, the farmer gave a demonstration on crop failure from army worms, little caterpillars brought on the wind from Florida. An entire field went brown almost overnight when a recent infestation moved in.

The farmers are using an organic insecticide made from naturally occurring bacteria to combat the pest and protect the rye grass, growing closer to the ground.

Rowe commented they are concerned with the army worm destroying more pasture this autumn: “A lot of folks will put in cover crops this fall, that’s always before the frost date so they put these cover crops in, army worm kills it, crop failure,” he said.

It was adversity that caused the Millers to start inseminating their own mares when their veterinarian moved away and the replacement was less effective and more expensive. Now, they are doing the work for other horse owners and large animal practices.

Jim Miller said they will work 100 hours or more per week at breeding time to get everything done.

“We would never have been pushed to go in that direction ourselves,” he said.

They hope to produce 15 foals for next year’s crop, smaller than planned, and in high demand.

“Where are they going, all over the country?” asked Spanberger.

In a statement afterwards, Spanberger said she heard directly from farmers on the ground about their opportunities and challenges of agriculture, the state’s No. 1 industry.

“I always appreciate the opportunity to learn from the dedicated women and men who feed and fuel our commonwealth, our country, and our world … I look forward to these experts continuing to inform how I can best represent them in the U.S. House,” she said in a statement.

Jim and Carolyn led visitors to several stops around their large farm. Even with all the hard work, they never tire of the natural beauty.

“This view is what prompted us to buy this place,” Jim Miller said. “You get busy and forget about it, but every once in a while you turn around and wow, that’s why I’m here.”

Many of the farm sites direct sold their products to an interested public, and the bustling commerce spilled over into downtown, with many shopping and dining, and the weather bright and sunny.

As the days continue to cool and autumn nears, this weekend should be the perfect time to sample rural life hereabouts.

'We got one thing in common - it's called cannabis'

A stallion stands for a photo last week at Greenstone Farm as mares graze nearby.

Rep. Abigail Spanberger listens about horse farming during a stop last week at Greenstone Farm, located near the Orange and Culpeper counties line.

Rep. Abigail Spanberger (right) interacts with horses on the Miller’s farm last week during a tour of local agricultural sites.