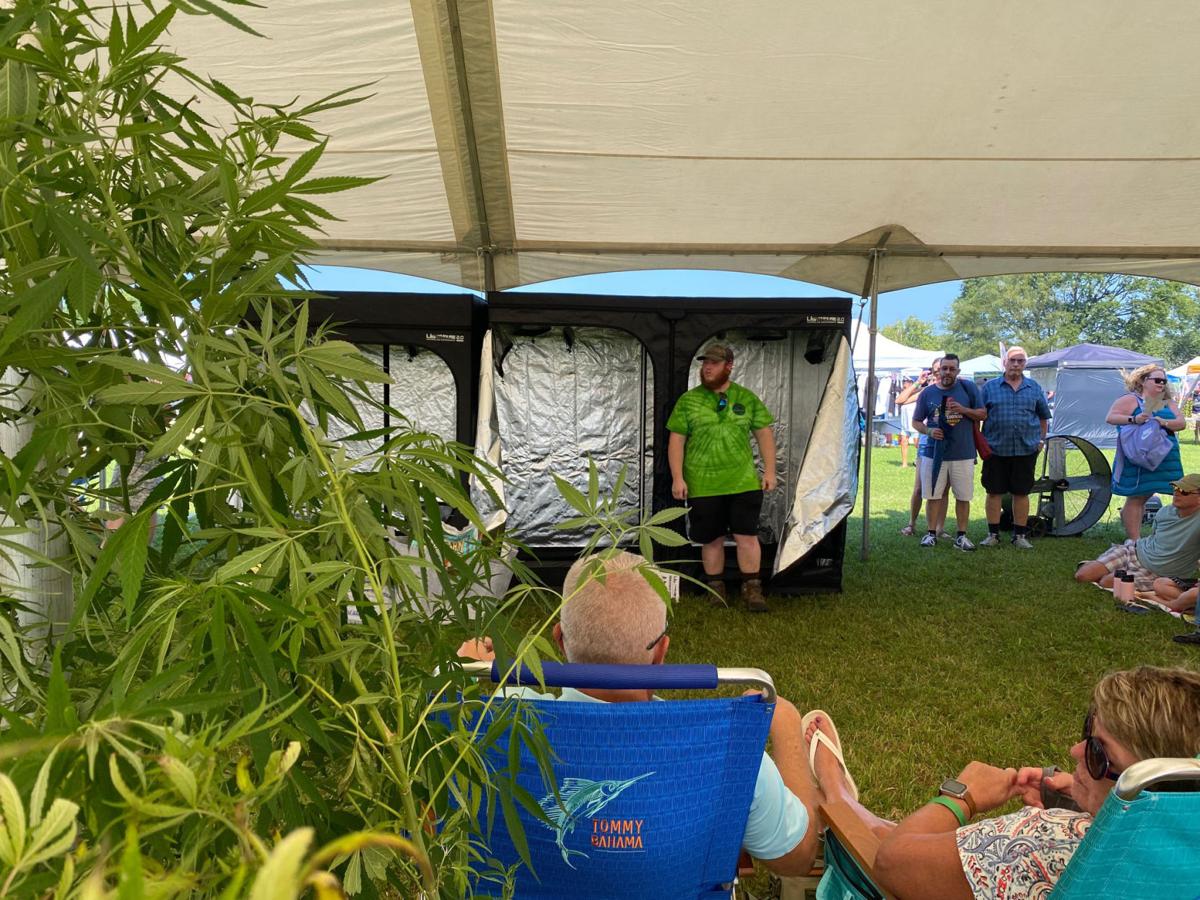 Attendees of Saturday’s VA Cannabis Growers event in Culpeper learn about grow tents during one of various education programs held throughout the day. 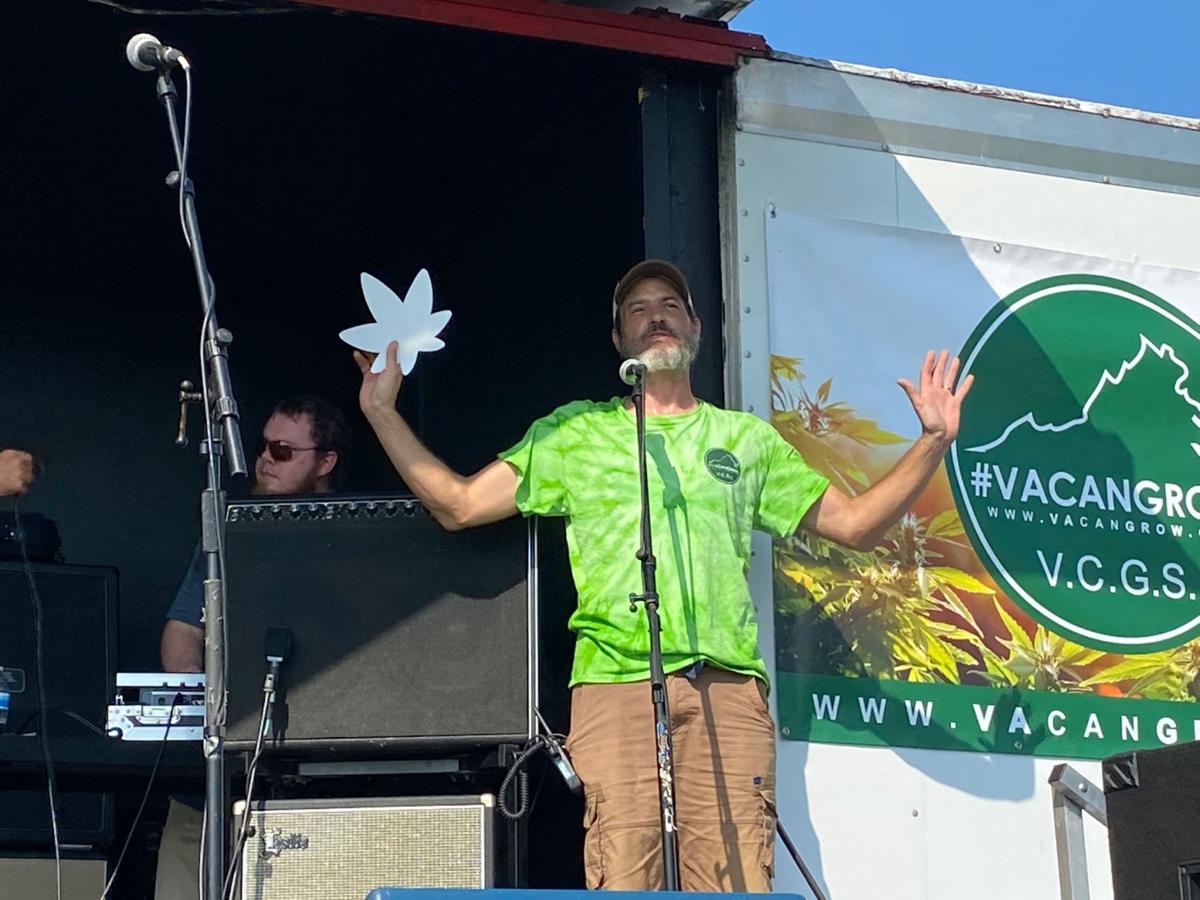 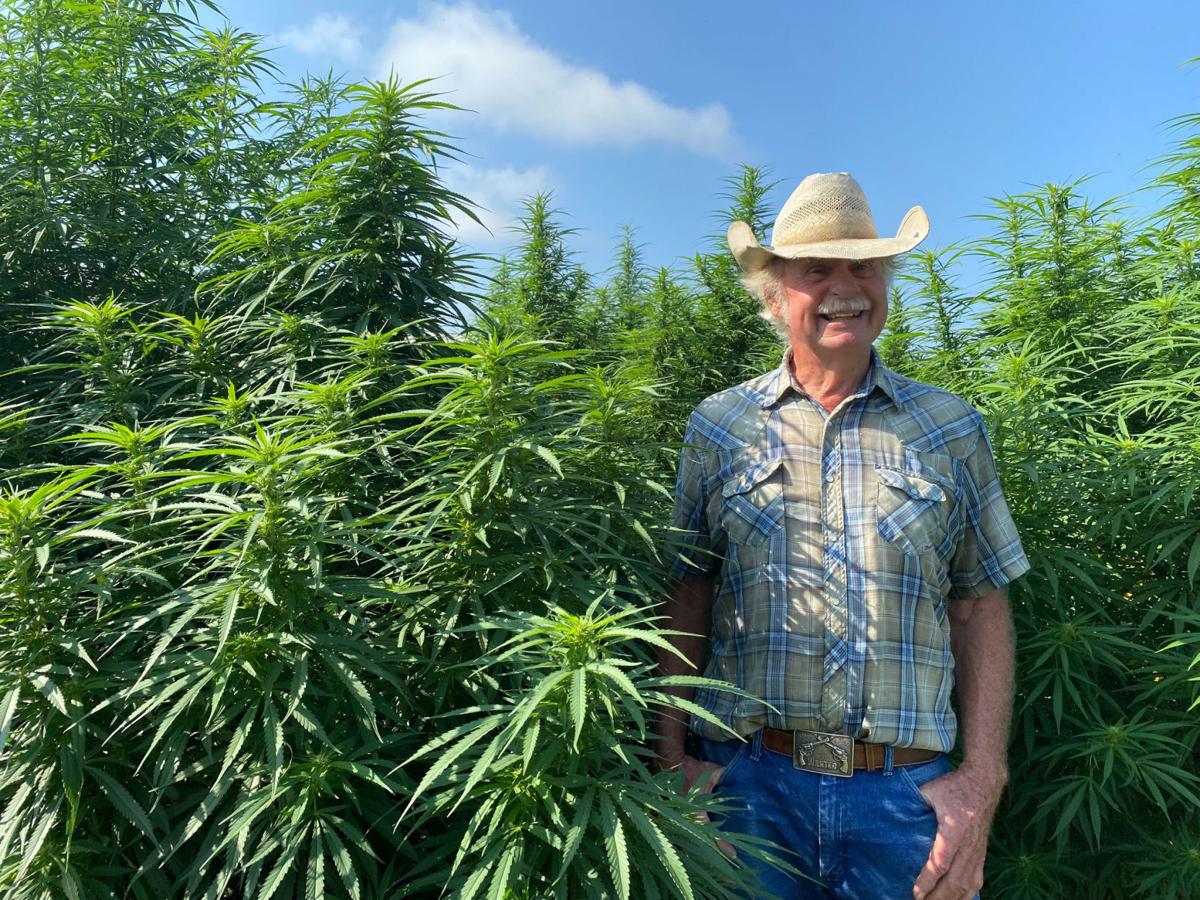 Moonshiner Chuck Miller smiles next to his hemp crop at Belmont Farm in Culpeper County during Saturday’s cannabis event. The farmer and business owner uses CBD to help him sleep. 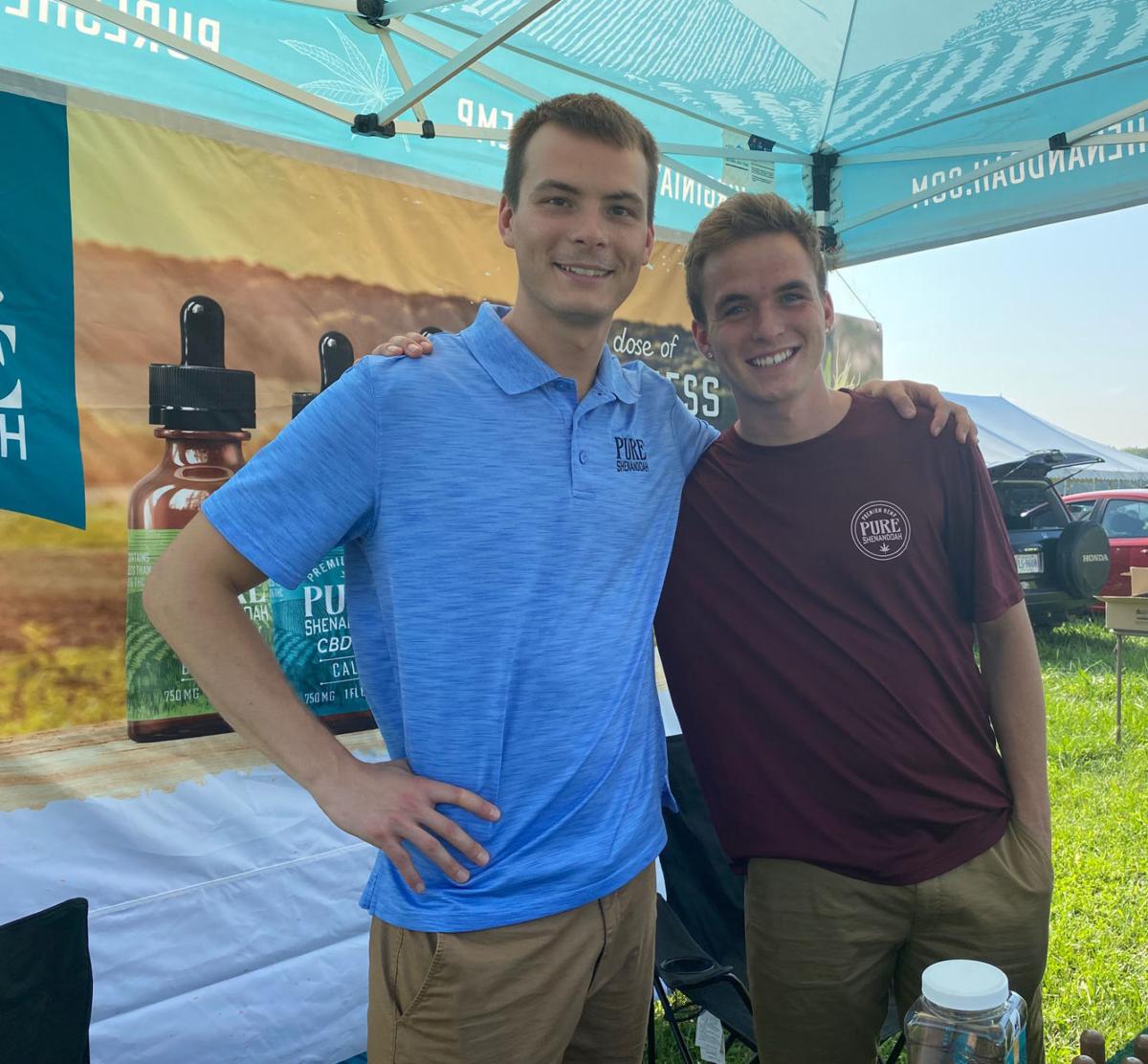 Tanner Johnson (left) and brother, Talbot Johnson, were among dozens of vendors participating in Saturday’s Virginia Cannabis Grower’s Conference in Culpeper. The brothers, of Elkton, raise hemp and sell CBD products through their company, Pure Shenandoah. 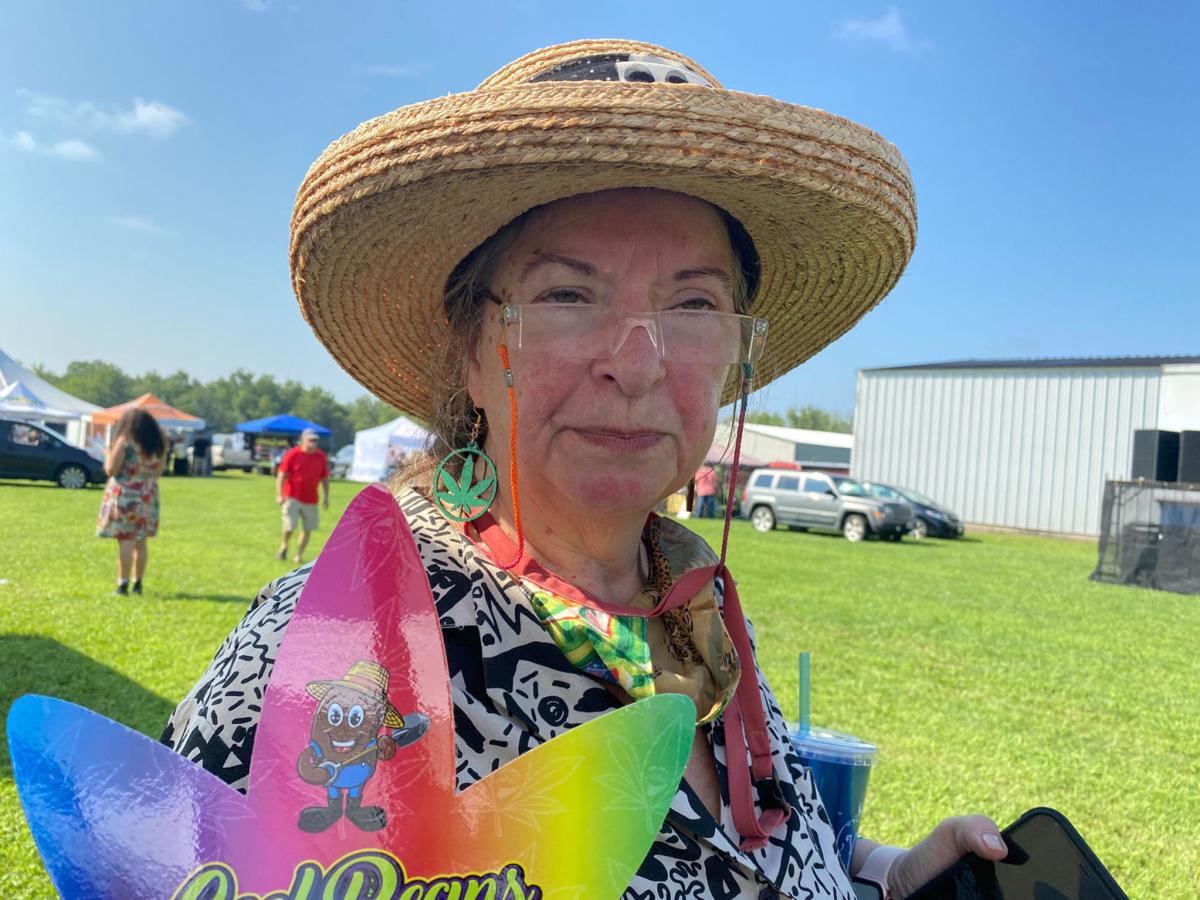 Liz Roberts of Sumerduck attended the symposium to celebrate the legalization of marijuana for adult recreational use. 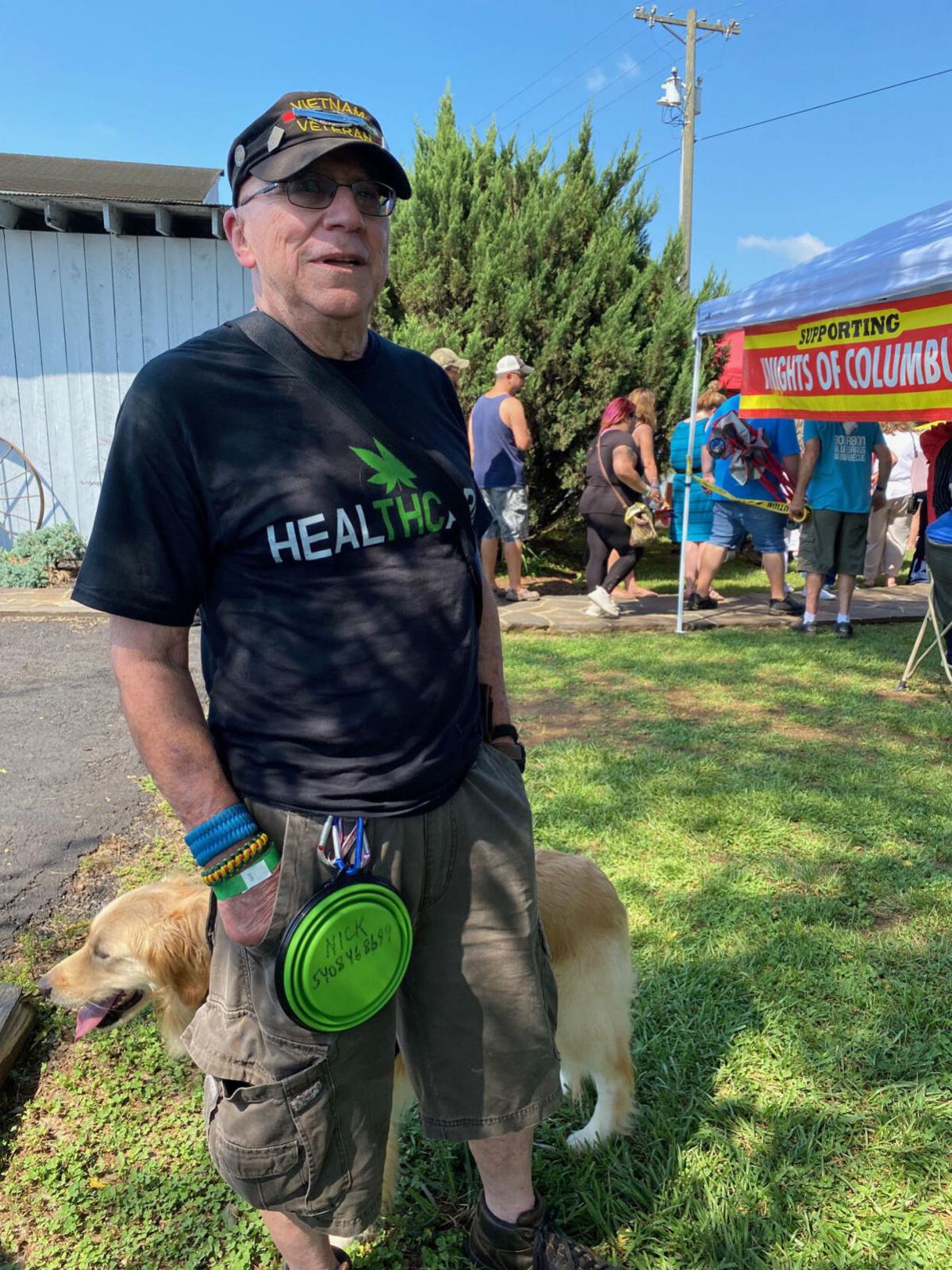 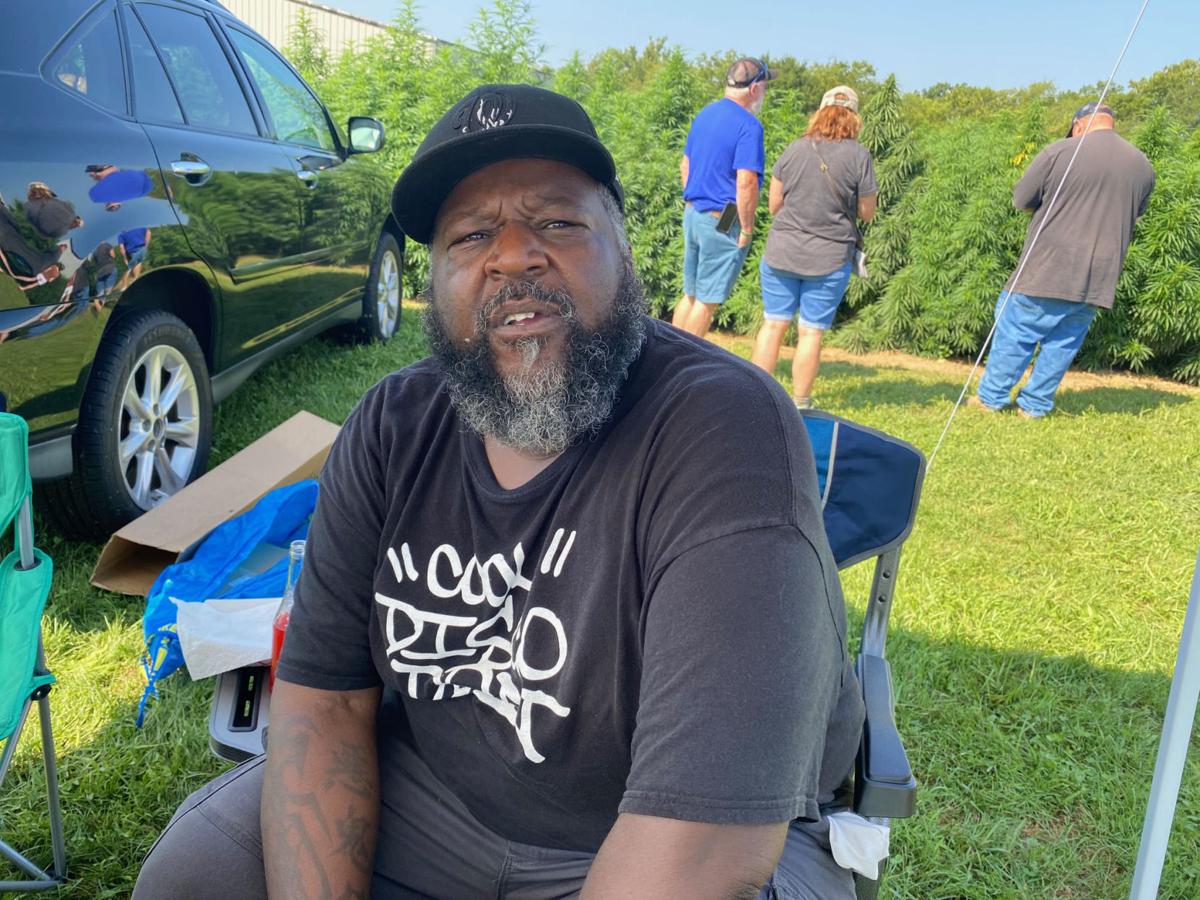 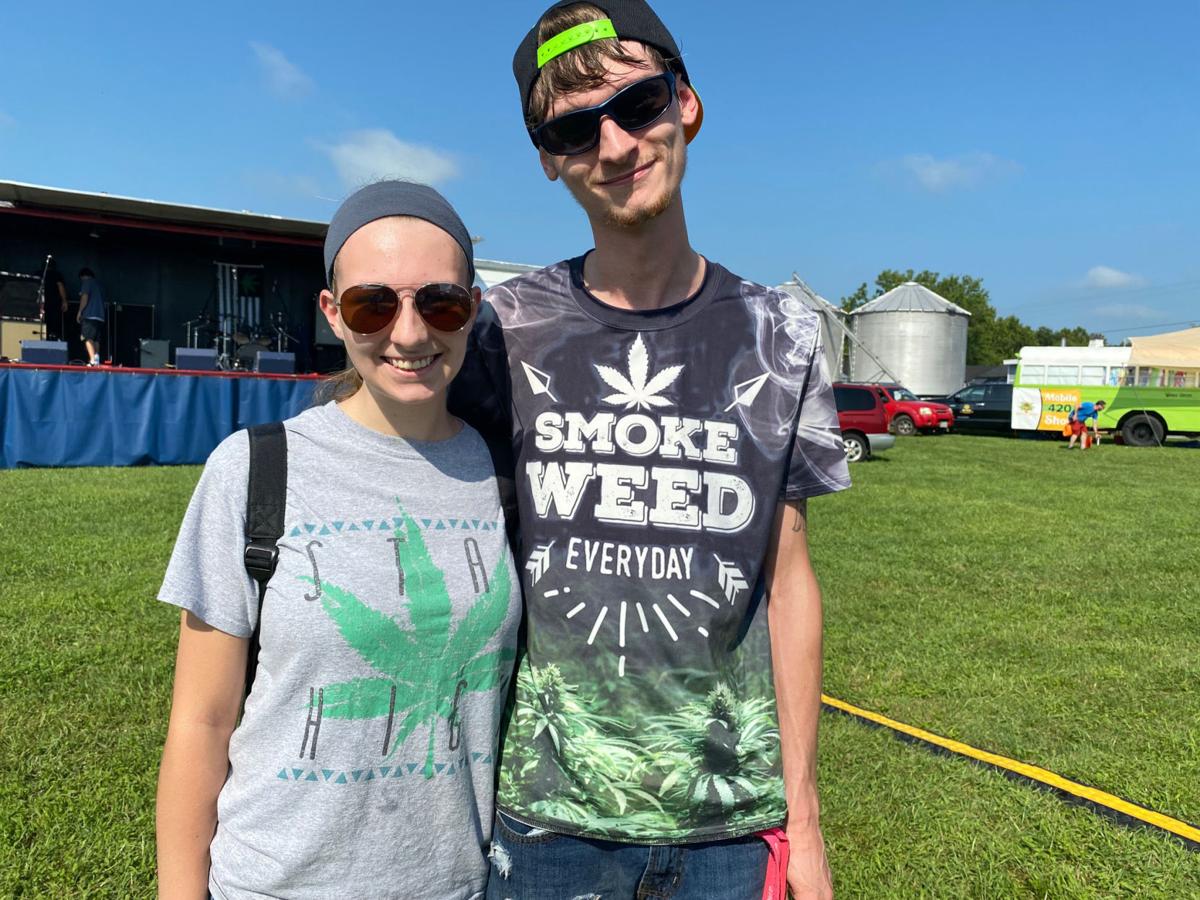 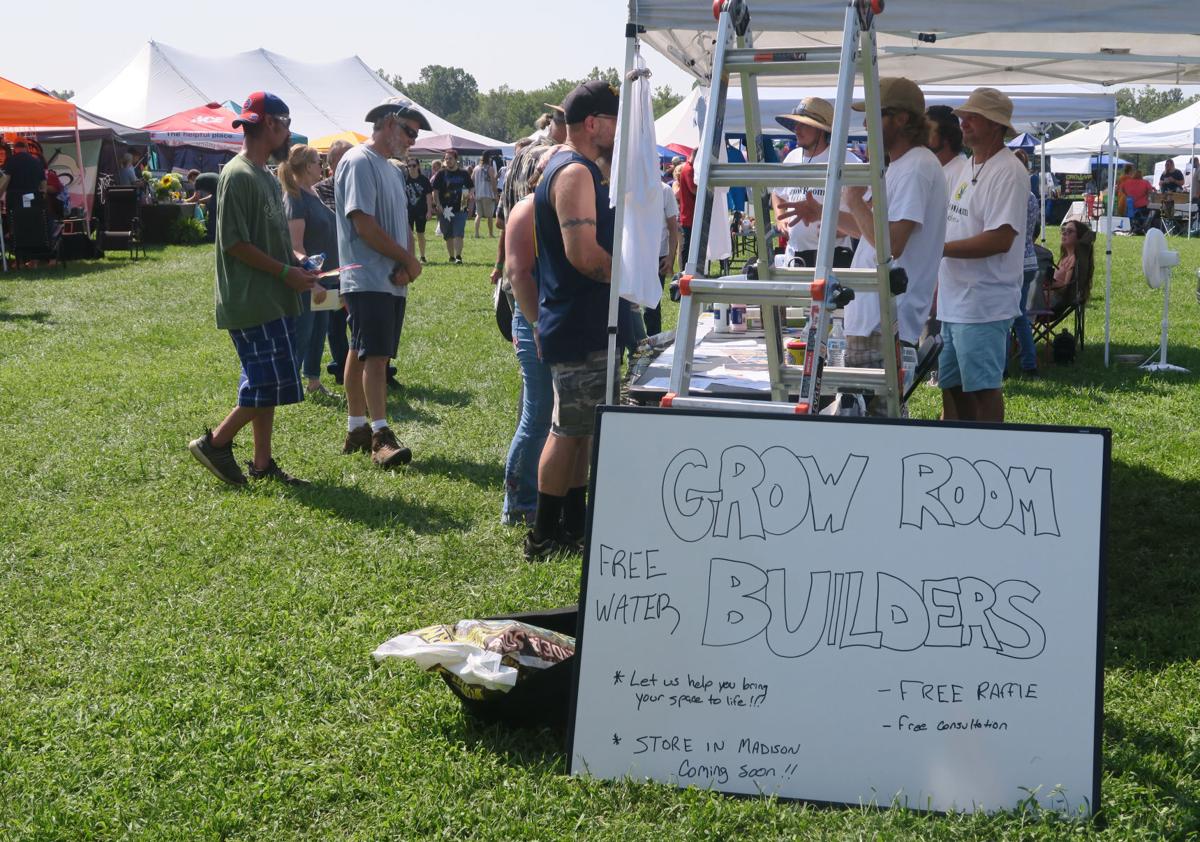 Legalized marijuana—since July 1 in Virginia for 21-and-older recreational use—is what united the estimated 1,000 or so who attended the education event and festival organized by Lignum hemp farmer Mike Sauer.

Agricultural producers and entrepreneurs interacted with an engaged public who openly vaped and smoked cannabis products on a very hot and humid August day in event fields on the working farm and whiskey distillery run by moonshiner Chuck Miller, and his wife, Janette.

There was a day’s worth of cannabis grow classes, live music, food trucks, dozens of hemp industry and CBD vendors, artisans, demonstrations, seeds and samples, and many advocates for marijuana Virginians are now legally permitted to grow—up to four plants per household.

Beginner topics under one of three large white tents included the plant’s grow cycle as well as sessions for advanced growers. Sauer, who’s been growing hemp for CBD extraction since it was legalized three years ago in Virginia, heavily promoted the event to a very successful turnout.

“It’s a highly interactive day, we want everyone to share their knowledge,” he said from the stage around 9:30 a.m., the program getting a late start due to severe storms the night before. “Feel free to take the microphone, please interact, that’s what this is all about, getting the community together. We got one thing in common it’s called cannabis and it brings all these great people together and it’s an amazing thing.”

Cannabis, from which marijuana is produced along with hemp, appears to be spawning a major business following in Virginia with numerous associated businesses in attendance at the day-long symposium including Tanner Johnson, with Pure Shenandoah in Elkton.

He started growing hemp three years ago for CBD and is looking forward to eventually growing cannabis for THC, found in much higher doses in marijuana, in partnership with his siblings, including brothers, Jake and Talbot, and a sister.

“We’ve got a couple of licenses in the works, applied for the medical program, will do recreational. Also doing fiber, that’s the male side of the plant,” said Johnson, the second oldest of nine.

“We have 650 acres growing on the fiber side. Last year we grew 25,000 plants for CBD production on six different farms. We’re partnering with Virginia farmers, really trying to build a base there, because it all starts with the farmer no matter what with this plant.”

“It’s a big deal and we’re having a lot of fun with it. We’re just getting started really so that’s what’s even more exciting.”

Cody Thompson, a recent college graduate, traveled from Roanoke with his fiancé, Dakota Brookman, for the cannabis event.

“This is the best thing that could have happened,” he said. “I mean legalization should have been a thing long, long time ago. This is the greatest place we could be.”

Thompson said the cannabis culture for him is about freedom and he is freely growing his own plants as well as running a grow consulting business.

“This is our dream,” added Brookman. She said she uses cannabis to alleviate anxiety and depression.

Making moonshine and growing the raw agriculture materials to do so in Culpeper County since 1988, Miller uses CBD oil to help him sleep.

“If you want a good night’s sleep, take a couple drops—works real good,” he said.

The local farmer likes it so well he planted an acre of hemp on his land, and is in the process of constructing a CBD distilling operation somewhere alongside the whisky distiller.

Miller said he would stick with the hemp and not grow marijuana from the cannabis plant.

“That CBD oil it’s actually good for people. Some people don’t want the high they just want the medical effects. It relieves anxiety, tension…I’m into making people feel better,” he said, adding the plants are easy to care for.

“They like the hot weather and they don’t like it real wet so it’s been a good year for them.”

Miller said he was surprised to see so many people turn out to his farm for a cannabis conference.

“I can’t believe the interest. Who would have thought this would happen?” he said, commenting on the July 1 legalization.

“It’s kind of like whiskey you don’t want to stay drunk all day you shouldn’t smoke marijuana all day. If you have a couple of puffs in the evening well I don’t see anything wrong with it, like a couple drinks in the evening.”

James Stanley, of Bedford, grows cannabis through his company, GROW VA, and was among the grow teachers at Saturday’s event. He’s also a disabled veteran of Iraq and Afghanistan who got prescribed a bunch of drugs from the VA when he got back from three tours in the war zone.

“I started taking them like I was supposed to and started having lots of adverse effects. So I decided to try cannabis and it was a total game changer. I use it to help with my anxiety and I also use it to help myself sleep, suppress dreams,” Stanley said. “I was able to get off all the prescriptions.”

While stationed in Washington State, Stanley observed the legal marijuana industry there and decided to give it a try. The Culpeper symposium was his first cannabis event.

“We’re just going to build off of this. We are looking to network. Want to get a gifting program from growers to veterans.”

Nick Travis, of Culpeper, is a Vietnam veteran, Army infantry, who uses a service dog, Embry, for assistance getting around and he also uses cannabis for wellness.

“I enjoy the changing attitude about marijuana, it’s not the killer weed anymore, a lot of medical issues it can help people with,” said Travis of why he attended Saturday’s event. “A lot of veterans use it not just for PTSD, but for anything. Marijuana it calms me down at night—my nights are not even like they used to be. I don’t stay up at night.”

Liz Roberts, of Sumerduck, came to the symposium as a celebration.

“I want to celebrate a little piece of sanity inside of the world that I live in now. This is a friendly gathering. People aren’t here to be angry, I thought the vibe would be good for that reason, but also it’s legal and I have been waiting forever,” she said. “It’s about time.”

Events like the symposium will help normalize marijuana, Roberts said, and hopefully shed the persistent stigma.

“It’s going to take a lot of gatherings and a lot of people being public for it to just be part of life,” she said, adding, “It’s important for people to show up to see the diversity of the community … the grow groups they are cross cultural, people are connecting with people over pot that they wouldn’t have connected with in any other way in their life.”

Sauer’s attorney, Daniel Bounds, of Warrenton, specializes in cannabis business law, another niche market created by pot legalization. He offered free legal advice at the symposium to cannabis users looking to stay out of trouble. Bounds had marijuana in a jar on his business table at the event.

“It’s less than an ounce, it’s legal to have, we’re not on public property, we’re not in a public area, it’s not viewable from the public road and I’m an adult that’s over the age of 21,” said Bounds, a veteran of the U.S. Marines. “I wanted to be the one, if an anyone’s going to do it, if an attorney’s going to make feel people comfortable I want to let them know that this is the new law, it’s ok.”

Cannabis culture has been around for thousands of years in human civilization, the attorney said, and it was once a requirement in Virginia to grow hemp for its thousands of uses, including rope and cloth.

“It’s coming back to what the culture was and not having silly laws written to get people in trouble for something that’s 100 percent harmless for the most part. We ended alcohol prohibition years ago and we understood what the issues were then I don’t see this being any different,” Bounds said.

Moonshining and marijuana have shared roots “with how the government has regulated what people can do on their own time,” he said.

Alexander Respeto, of Light Up Hemp in Charlottesville, enthusiastically told people about using cannabis in Virginia from his booth at the symposium. It was their first such event in the state.

“It’s cool just to see hemp start expediting and outsourcing into what it really is, it’s cannabis, it’s been so behind the shadow and so taboo, I think people now are, thank god, for legality, finally getting to that point,” Respeto said.

Nguwen uses a wheelchair to get around due to cerebral palsy. Marijuana helps his legs feel better.

“I got sciatica, nerve damage and it kicked in real bad so it helps relax my muscles, helps me sleep, helps me eat, it helps me lose weight,” he said. “Better for my health all around.”

Carlton Baker, representing Amber Jar Naturals of Arlington, sells CBT-infused products for pets and humans. He uses cannabis for his arthritis and said they just had to attend the Culpeper event.

“The first one for the state—kind of historic,” Baker said. “We are big proponents—I use it every day. And it’s another thing people have in common, see people from different walks of life and backgrounds everyone getting along and everyone’s enjoying themselves.”

Attendees of Saturday’s VA Cannabis Growers event in Culpeper learn about grow tents during one of various education programs held throughout the day.

Moonshiner Chuck Miller smiles next to his hemp crop at Belmont Farm in Culpeper County during Saturday’s cannabis event. The farmer and business owner uses CBD to help him sleep.

Tanner Johnson (left) and brother, Talbot Johnson, were among dozens of vendors participating in Saturday’s Virginia Cannabis Grower’s Conference in Culpeper. The brothers, of Elkton, raise hemp and sell CBD products through their company, Pure Shenandoah.

Liz Roberts of Sumerduck attended the symposium to celebrate the legalization of marijuana for adult recreational use.