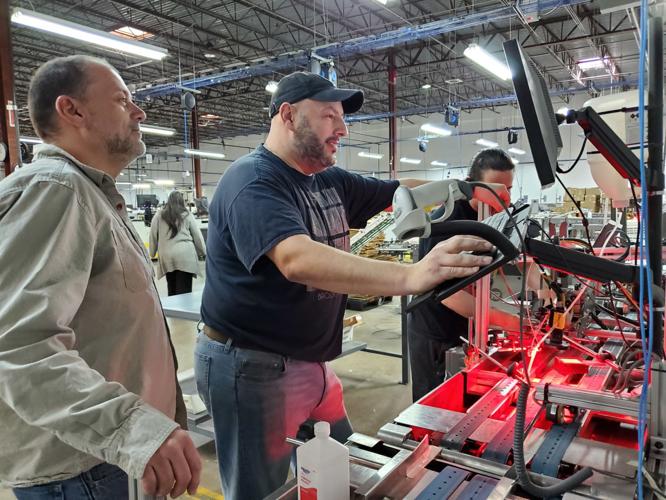 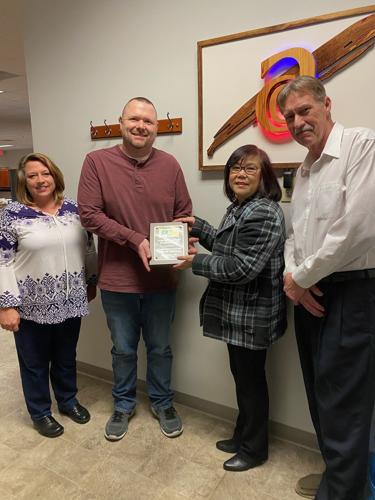 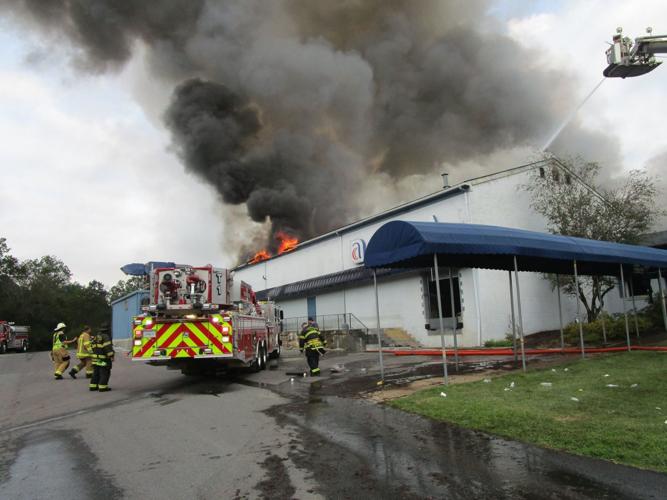 Communications Corporation of America was destroyed in a fire on August 27, 2017, impacting its 300-plus employees. 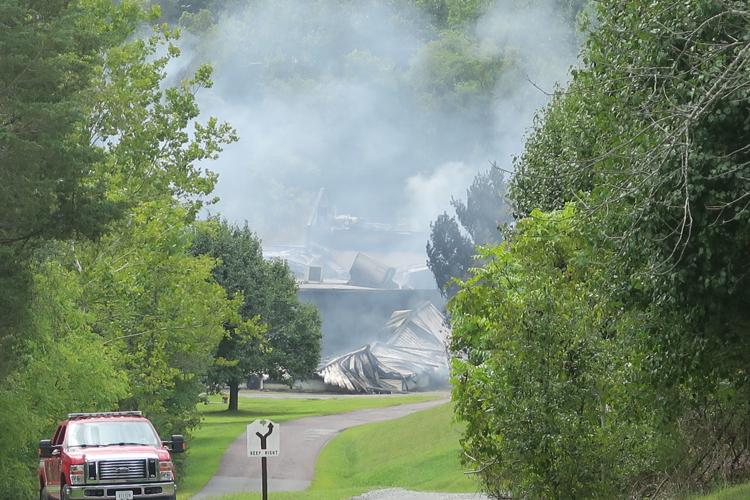 Small fires still burned inside Communications Corporation of America days after a fire in August, 2017, that destroyed the Culpeper factory. 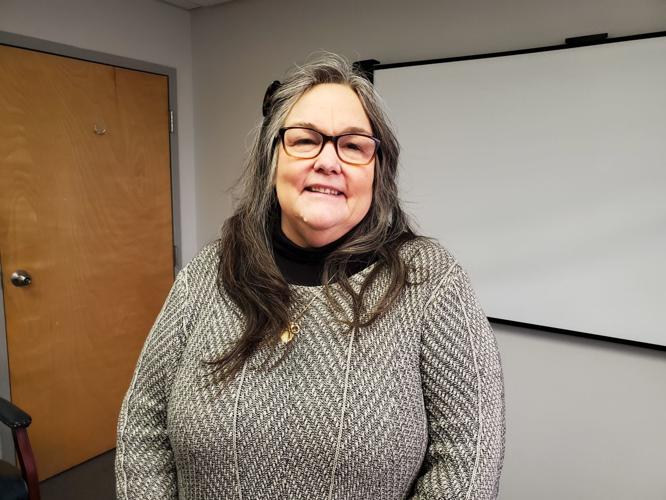 Corporate Communications of America Director Mitzi Mills talks about accomplishments of her employees during a recent interview at the company’s warehouse in Elkwood. 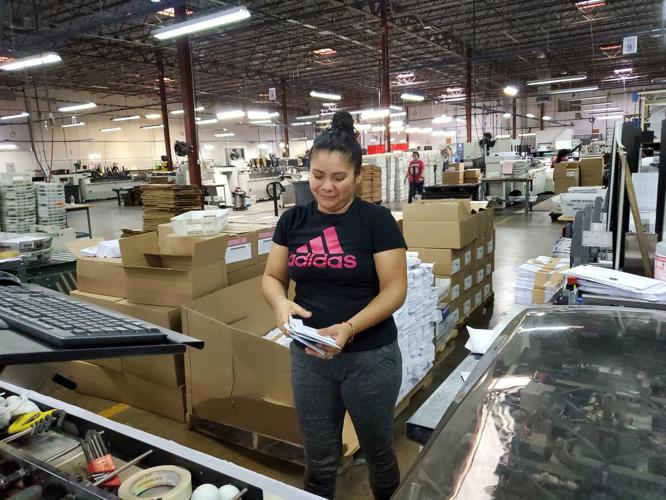 Yanci Miranda, an inserter operator at Corporate Communicatios of America, works at the company’s warehouse in Elkwood. 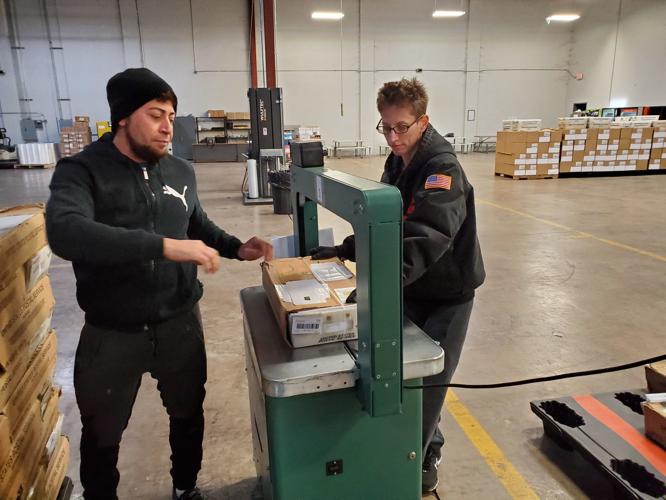 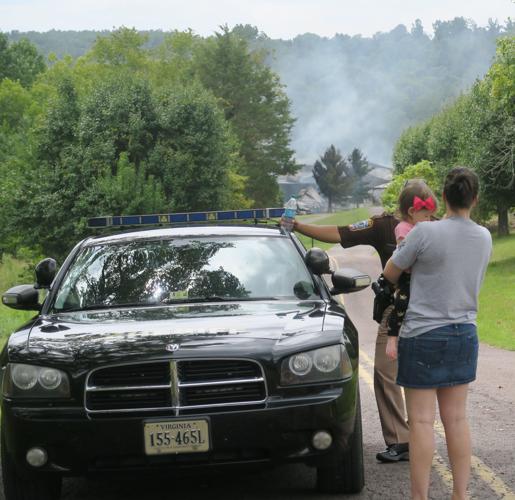 An employee of Communications Corporation of America holds her baby in August, 2017, as her place of employment smolders in the background.

A Culpeper County firm is among the nation’s very best at what it does, the U.S. Postal Service says.

The federal agency honored Communications Corporation of America, a direct-mail business headquartered in Culpeper, in January.

The Postal Service gave CCA a major regional award for its proficiency in preparing large-volume mailings. CCA had achieved a 98 percent rating in 2019.

“According to the USPS Northern Virginia District, there may be only one other mail house in the nation that has achieved a 98 percent,” CCA director Mitzi Mills said in a recent interview. “We’re so proud of our entire team of employees that have made this possible.”

The recognition signals the rapid comeback made by the company, whose 130,000-square-foot factory warehouse in Boston, near the Rappahannock County line, was destroyed by fire in August 2017. It lost millions of dollars of machinery.

But 18 months after the blaze, CCA has resumed operations in eastern Culpeper and hired back many of the workers it had to let go after the fire—now employing 135 people.

Immediately after the fire struck, more than 300 CCA employees faced uncertainty as company executives announced layoffs and determined what to do with its warehouse’s ruins off State Route 522. Black smoke rose from the site for days after the fire consumed printing chemicals and presses.

“We will rebuild,” CCA owner Steven Fisher vowed at the time in a Star-Exponent interview.

Investigators determined there was no foul play in the fire, Mills said. “They know it was electrical, started inside one of the drop ceilings overhead,” where old and new electrical connections had been interfused over 40 years, she said. “And [from the ceiling, the fire] fell onto paper—very combustible material. There was just no stopping it.”

Fortunately, no one was hurt in the blaze, which occurred late on a Saturday evening when only a handful of people were working in the 24-hour facility. Alarms went off, alerting workers of the danger. Everyone managed to get out of the building.

“Once the fire got to the print shop side and all the chemicals there, it just became overwhelming,” Mills said.

More than 200 volunteer firefighters from many rural volunteer departments responded, pumping 500,000 gallons of water into the structure, she said.

For the sake of the environment, fire experts recommended allowing the fire to burn off the chemicals, Mills said. That took nearly two weeks and required constant supervision to prevent the fire from spreading.

The Friday after the fire started, CCA executives announced they were laying off more than 200 employees.

“It was a very emotional time, very difficult,” Mills said, explaining how CCA decided to keep a core of about 85 employees to help rebuild its operations in the face of many unknowns.

Fabian Galimberti, an employee, was on vacation when the fire broke out. A friend called and told him about it, and Galimberti immediately contacted Mills to see what he could do to help.

“CCA is like home to me—I went straight to work there when I came here from Argentina,” Galimberti recalled in a recent interview. “So the fire was like losing part of my home.”

When Galimberti learned he was among the employees that CCA would retain, he felt very blessed, he said.

“I immediately created a Facebook group to help all those who lost their jobs, and translated for them,” Galimberti said. “I passed on all the information from the company to the Hispanic community.”

Phil Sheridan, Culpeper County’s director of economic development, said the company’s response to the fire was “quite wonderful,” in the effort invested into working with local and state officials to provide those who had to be laid off with temporary employment.

“It was heartwarming to see everyone come together,” Sheridan said. “Marty’s team was especially helpful.” He was referring to Marty Bywaters-Baldwin, director of workforce services for Virginia Career Works, a program of Rappahannock Goodwill.

Baldwin, fluent in Spanish, was instrumental with job placements and in smoothing the path to employment for many of CCA’s laid-off workers.

“From my standpoint, it was wonderful [CCA] decided to rebuild in Culpeper,” Sheridan said. “They had many choices, and could have gone anywhere.”

Before the fire, CCA was in the top five of Culpeper companies—except for health-care firms—for the number of jobs it provided, Sheridan said.

Established in 1971, the privately owned family business was started in downtown Culpeper before moving within a few years to its Boston site off Route 522.

Over nearly a half century, CCA grew to become one of the nation’s largest direct-marketing, full-service mail production providers. As it grew and expanded, it became a key player and built a state-of-the-art facility.

But after the fire, its plant was a total loss. None of its equipment could be salvaged.

The remaining employees fought to keep their clients, outsourcing work and rebuilding the business.

In October 2017, CCA acquired warehouse space at 13129 Airpark Drive in Elkwood near the Culpeper Regional Airport. After refitting the space, it moved in and mailed its first piece from Elkwood on Dec. 21, four months after the fire.

CCA has about 70,000 square feet, compared to its former Boston plant’s 300,000 square feet, Mills said. With less space and without their previous hardware, CCA can’t operate at the same capacity it did before, she said.

It now has about 30 different clients, mostly nonprofit organizations, for whom it prepares direct-mail campaigns, including printing membership cards and personalized letters, among other things.

“Overall, we’re still moving forward, getting back to where we once were,” Mills said. “We have about half as many employees and don’t have all the same services. One day, we hope to be back where we were before.”

Also learn more about controversies at Airbnb and Whole Foods, plus view six charts tracking the markets. Here's a look at the week's top business and consumer news.

This could be the last holiday shopping season for Sears

It's been a slow, quiet death for the iconic chain, whose groundbreaking catalog and anchor position at many malls nationwide once made Sears both the Amazon and the Walmart of its day.

These are the 100 richest people in the world

Some of the people on this list helped build tech empires or turned businesses into global conglomerates. Others were handed their wealth by birth.

On top of holiday shopping, planning family trips, and everything else that comes with the holiday season, it's important to get a handle on your tax planning before December ends.

A finance expert explains why President Biden’s student loan forgiveness program got blocked — and what’s next for student loan borrowers in search of relief.

How stay-at-home spouses can build credit

Even if you don't earn an income, it's important to build your own credit score. Here are some tips to make it happen.

Do you get paid through Venmo, Etsy or Airbnb? Beware of new tax rules

A new rule doesn't impose any additional taxes on anyone, but it will make it harder for someone to evade or lowball taxes by using online services to channel their business income.

Coastal Virginia, the Shenandoah Valley, and Blue Ridge Highlands regions contributed most significantly to the overall recovery in the Commonwealth.

PennyWise has tips to help you stay on budget and find deals while shopping for gifts this holiday season.

Why you should pay attention to bonus offers from banks

Why you should pay attention to bonus offers from banks

Save time and money during the holidays with these apps

Save time and money during the holidays with these apps

Communications Corporation of America was destroyed in a fire on August 27, 2017, impacting its 300-plus employees.

Small fires still burned inside Communications Corporation of America days after a fire in August, 2017, that destroyed the Culpeper factory.

Corporate Communications of America Director Mitzi Mills talks about accomplishments of her employees during a recent interview at the company’s warehouse in Elkwood.

Yanci Miranda, an inserter operator at Corporate Communicatios of America, works at the company’s warehouse in Elkwood.

An employee of Communications Corporation of America holds her baby in August, 2017, as her place of employment smolders in the background.