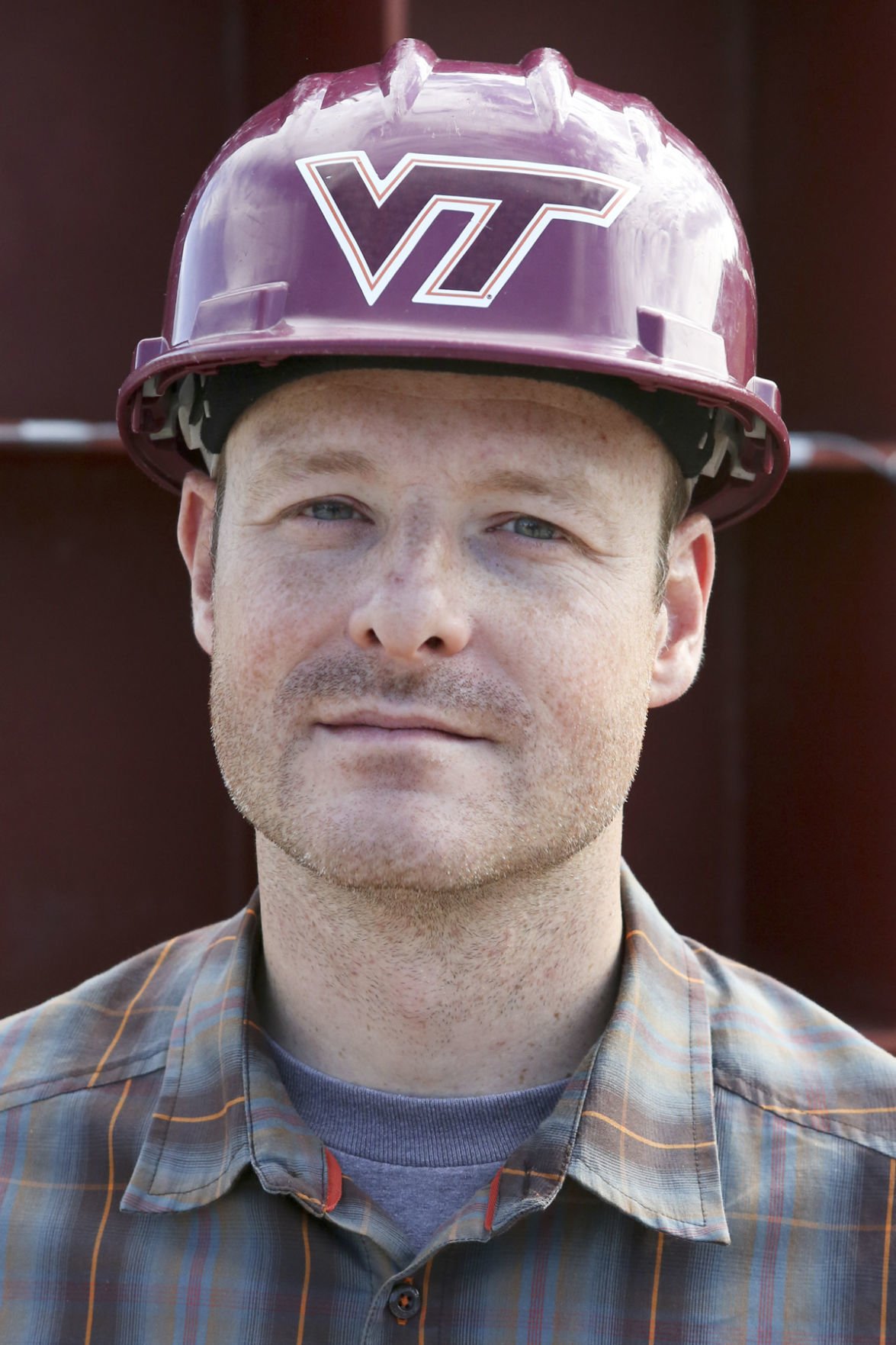 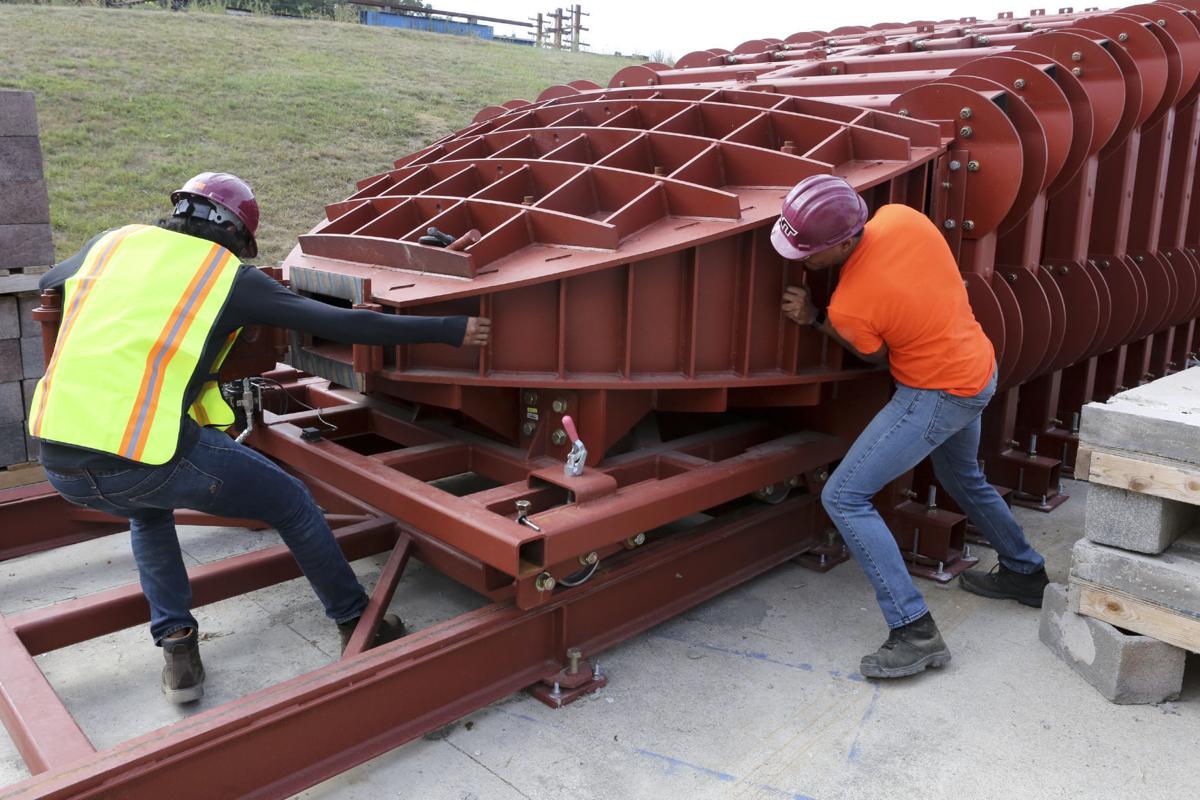 Engineer graduate students Muhammad Ali (left) and Jalen Johnson open the shock tube between tests. The device is designed to test the strength of construction materials to see how they withstand explosions. 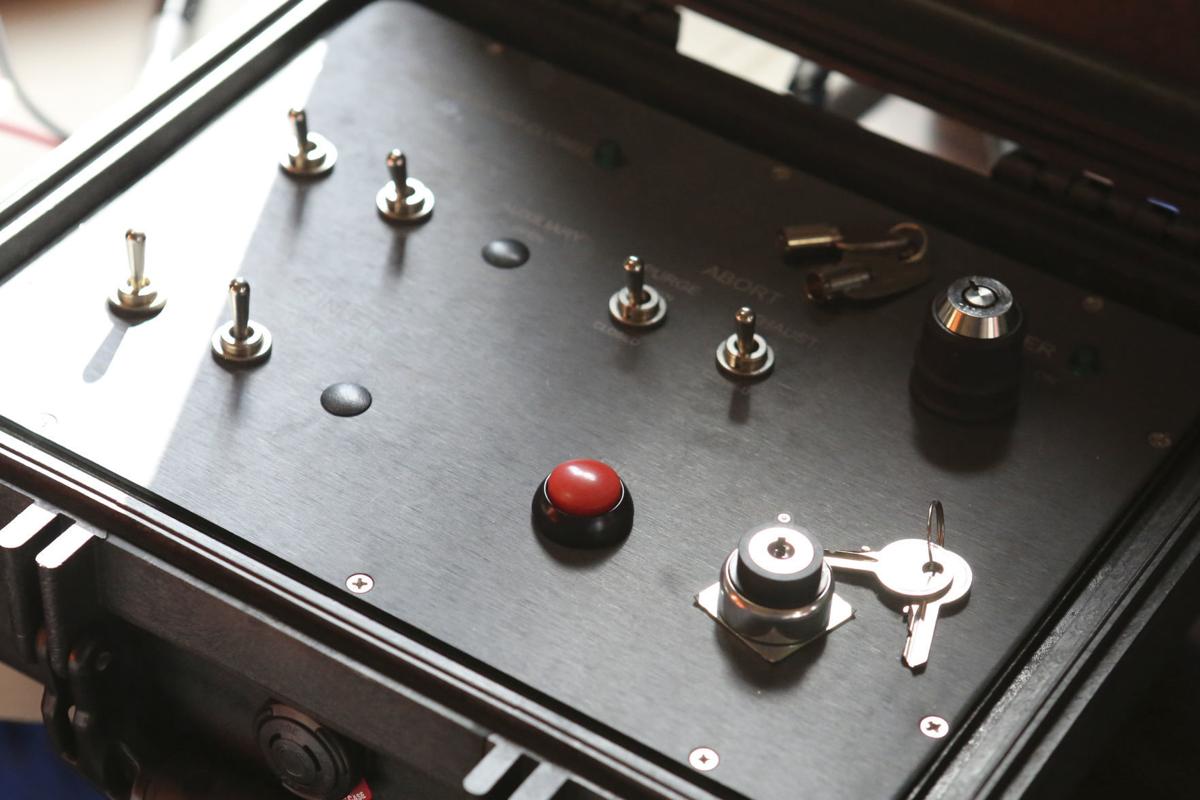 The red detonation button is how Virginia Tech researchers ignite gases to create explosions inside the 75,000-pound shock tube.

Engineer graduate students Muhammad Ali (left) and Jalen Johnson open the shock tube between tests. The device is designed to test the strength of construction materials to see how they withstand explosions.

The red detonation button is how Virginia Tech researchers ignite gases to create explosions inside the 75,000-pound shock tube.

A massive explosion reverberates through the hills on the edge of town. Jacques and his team of graduate students have just created a shockwave that’s the equivalent of 400 pounds of TNT inside a 75,000-pound metal shock tube.

“Nice,” he says as he looks to survey the impact of the blast. The massive segments have been moved by the shockwaves that took Jacques and graduate students Muhammad Ali and Jalen Johnson all their strength to budge.

Jacques, a Virginia Tech engineering professor, is doing explosive experimentation in the name of science inside a giant shock tube off Inventive Lane in Blacksburg. The tests, which started in early September, will be used by Tech engineers to research how building components and infrastructure can withstand humongous explosions.

The shock tube is a multi-part, long metal chamber. Tech researchers ignite gases—a combination of oxygen and acetylene, a commonly used torch fuel—to make a powerful explosion and the blast travels through the tube to strike the end, where materials are put to the test.

It takes researchers hours to set up the gas lines, prep the tube and put materials in place for a test that lasts a fraction of a second.

The tests, which take place outside the Thomas M. Murray Structures Lab in Blacksburg, are so loud that researchers are sending out alerts to the community so people will know the source of the horn blasts and booms.

“We thought it was important to let people know what’s going on,” Jacques said.

Jacques is in his second year as an engineering professor at Tech and he’s spent much of his time on campus prepping to bring these shock tube tests to Blacksburg. It is the only facility of its kind in the United States at a university, though there is one in Canada where Jacques was a graduate student at the University of Ottawa.

The tube is designed to show how shockwaves from explosions—either terrorist attacks or industrial accidents—will affect building infrastructure like steel beams, concrete slabs or blast doors. Recent tests have been about calibrating the brand new machine, but in the near future researchers will be looking at actual items.

“Ultimately it’s all about keeping people safe,” he said.

Safety is the top priority of the tests, too. Everyone in the area wears ear protection, and Jacques deployed students to make sure there were no cars traveling on nearby roads or joggers or bicyclists on the nearby Huckleberry Trail.

The horn, which Jacques built to be louder after a handheld air horn proved inadequate, also serves as a warning so people working in the area know a big boom is coming.

Getting this experience is also valuable for students who will take it out into the real world.

Johnson and Ali, both seeking their master’s degrees, will likely go into industry. Engineers fresh out of college with experience doing blast testing are rare, Jacques said.

“It’s really exciting,” to be on the front end of testing like this, Ali said.

“This is new to me and it’s new to Virginia Tech,” Johnson said. “That’s cool.”

But on top of the good experience for jobs and making the world safer, the tests are sure to elicit smiles from those participating.

Johnson said he was nervous the first time he pressed the red button to ignite the gases that create the big boom. Now, he just likes to do it.

And who can blame him, Jacques asked rhetorically. Making big booms in Blacksburg is just plain fun.

“Our job is to literally break stuff,” he said.