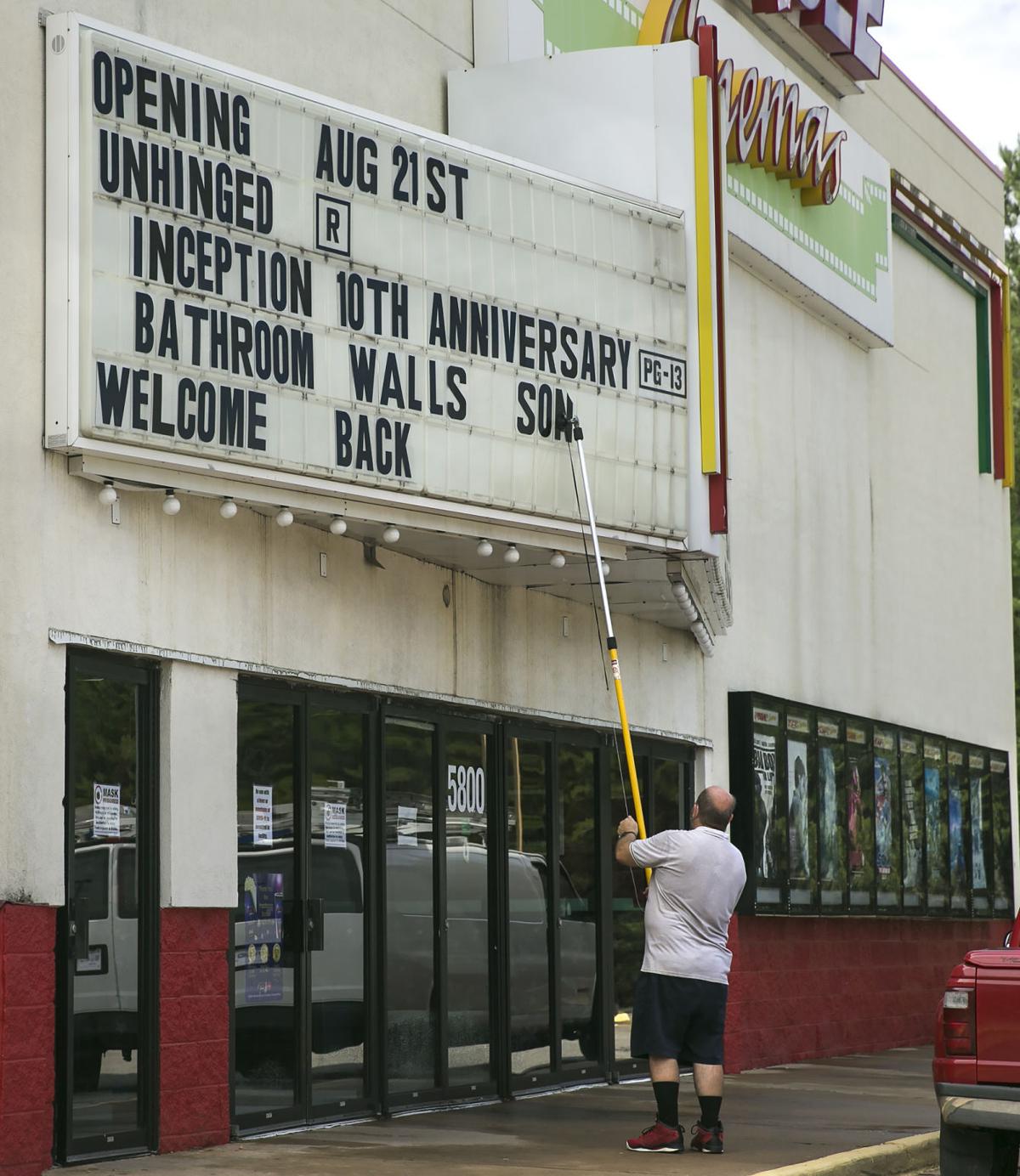 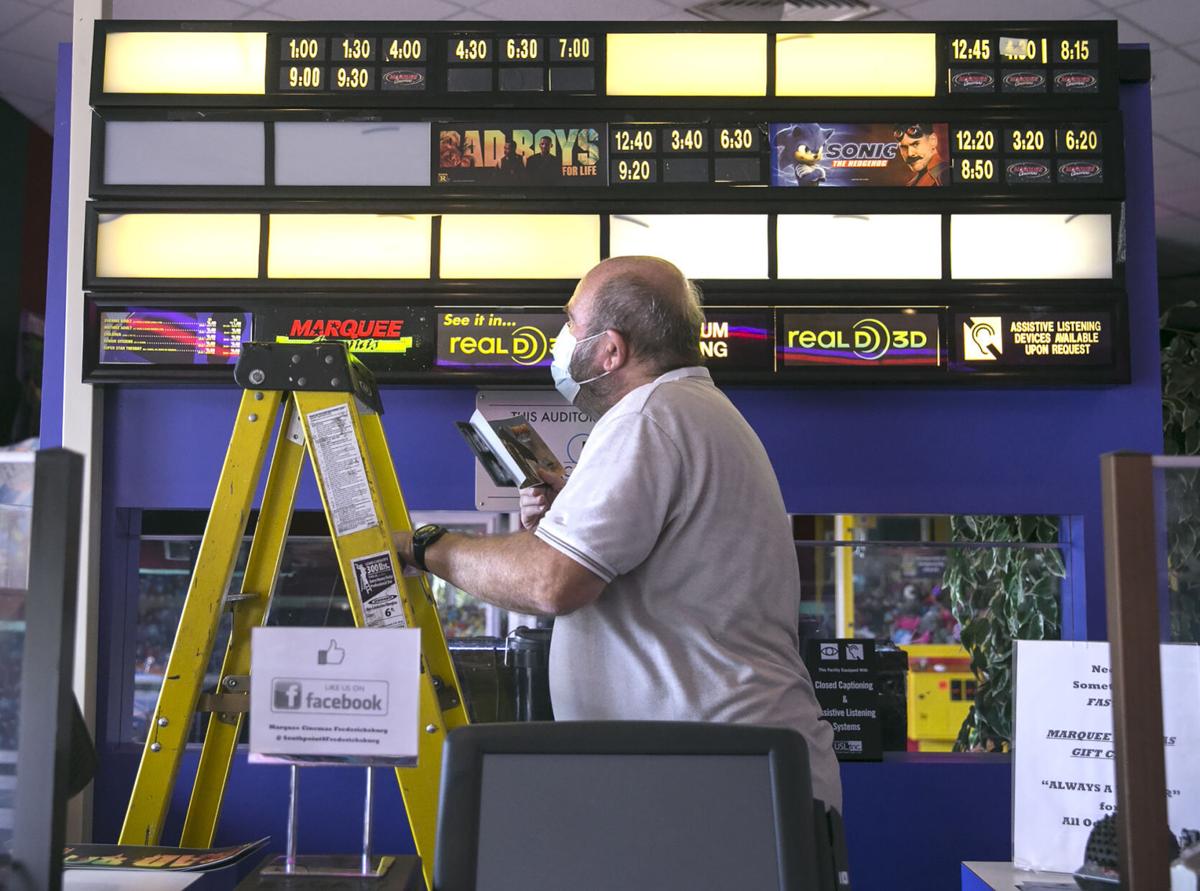 Chris Boggs, general manager of Marquee Cinemas in Southpoint, posts movies and showtimes behind the ticket counter of the Spotsylvania County business on Wednesday, Aug. 19, 2020. 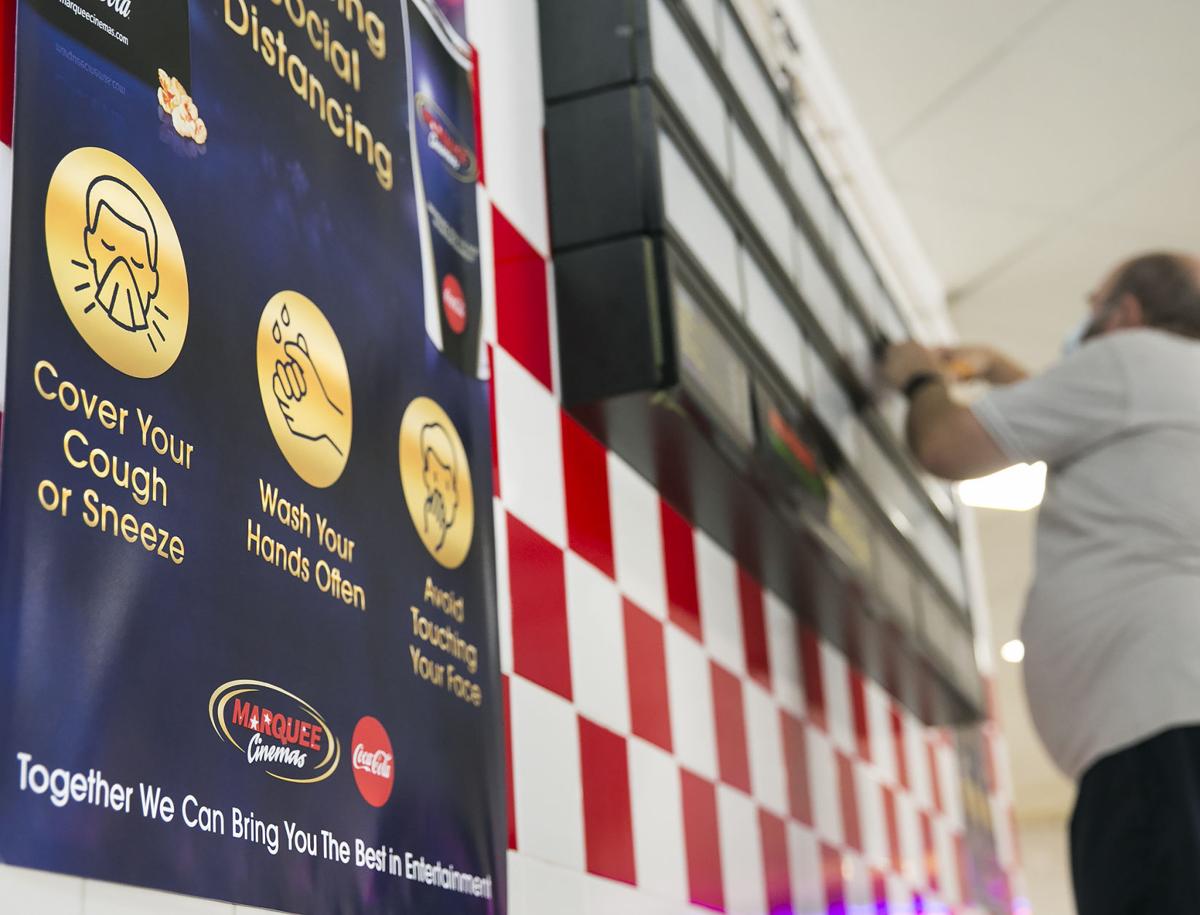 Coronavirus-related signage is posted throughout Marquee Cinemas in Spotsylvania County. 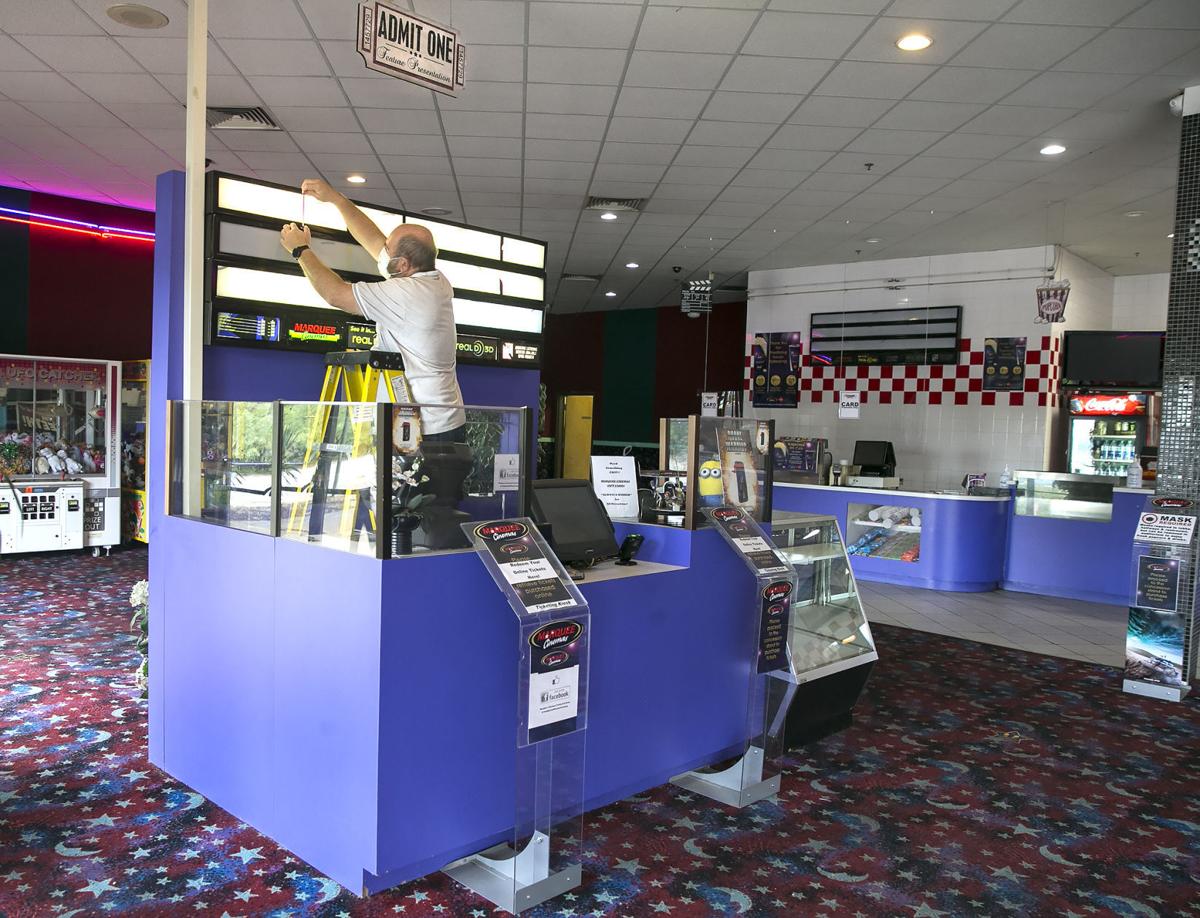 Chris Boggs, general manager of Marquee Cinemas in Southpoint, preps the theater for its Friday re-opening on Wednesday, Aug. 19, 2020.

By ROB HEDELT THE FREE LANCE-STAR

When movie theaters open Friday—most for the first time since COVID-19 shut them down—films won’t all be new, capacities will be capped at 50 percent or less, and staffers will spend much of their day cleaning and sanitizing.

But all the local managers who would talk about the reopening of their theaters said they and their staffs are glad to finally get doors open again and films up on the big screens.

“We’re just really excited to get our people back to work and to sell tickets for movies again,” said Chris Boggs, longtime manager of Marquee Cinemas at Southpoint in Spotsylvania County.

But he said his theater, like all others who have been waiting for movie distribution companies to once again release films, will just have to wait and see how safe movie lovers feel about returning to theaters.

“We’ll do all we can to clean and sanitize, check workers for signs of illness and require customers to wear masks when they come in, everything we can to keep people safe,” Boggs said. “But we’re like every other business that’s closed and then reopened. We’re going to have to hope customers have a sense that it’s safe to back to the movies.”

Part of being able to reopen the doors is having some new movies to share, something studios and film distributers froze when COVID hit and theaters closed their doors in early spring. They’re slowly starting to release new films, with the blockbuster espionage thriller “Tenet” set to arrive Labor Day weekend.

The new movies arriving this week are “Unhinged,” starring Russell Crowe as an unstable man who chases a woman who becomes the target of his rage; “Words on Bathroom Walls,” a film about a high school student who falls in love as he’s diagnosed with a mental illness; and at one theater, “Tulsa,” the story of a desperate veteran whose life is turned upside down by connecting with a 9-year-old daughter he never knew existed.

Also showing up at local theaters is a two-year-anniversary edition of “Inception,” Christopher Nolan’s tale of a thief who steals corporate secrets via dream-sharing technology, starring Leonardo DiCaprio.

Mixed in at local theaters will be older movies, everything from Clint Eastwood’s “Unforgiven” to “Jaws” and more recent releases like “Sonic the Hedgehog” and the “Star Wars” epic, “The Empire Strikes Back.”

Sanitizing will be the main focus of theater employees, with staff members cleaning facilities from early until late.

Don Edwards, director of marketing for the Paragon movie chain, based in South Florida, said safety protocols will affect everything the chain’s theaters do, from selling tickets to requiring masks to the seating arrangements.

He said reopening is a “big deal that’s been a long time coming, and we’re excited to be back in business. We’ll be operating at a reduced theater capacity, with a staggered seating plan for our seats, which are all recliners. There will be a pair of seats together, with no one behind or in front, a checkerboard pattern that will allow greater than 6 feet separation for customers.”

He ticked off plans for sanitization and cleaning that the other theaters listed as well: safety shields and constant cleaning in high-contact areas, health checks for staffers, requirements that all customers and staff wear masks, with employees wearing gloves and the complete wiping down of seats between shows.

One specific thing he noted that Paragon has done: adding HEPA air filters to lobby areas where people congregate that he said “are 99 percent effective at removing bacteria and virus. We’re trying to go a step and above, as we want people to feel comfortable. We’re doing everything we can to provide a safe and healthy environment.”

Like other theaters, Paragon is asking people to download its mobile app to purchase tickets or use online ticket services to avoid that point of contact if possible, to practice social distancing in the theater, to use the provided hand sanitizer stations and to stay away if feeling ill.

In addition, he noted that crew members will wash their hands, change their gloves and sanitize their work stations every 30 minutes, with timers set to remind them.

Boggs noted that his theater will follow similar sanitization protocols, something he and staffers have been getting ready for over a series of months.

“We’ve been hearing for months when we might reopen, but the time kept getting pushed back, largely by the studios not wanting to release films,” said Boggs. “I’ve personally gone over each theater, doing some deep cleaning and getting ready for the day when we were able to reopen.”

He said that as staff has been called back and snacks restocked, there have been plans drawn up and meetings held about the constant sanitization, the posting of signage to explain distancing requirements and the requirement to wear masks.

“We’ll be like other theaters, only allowed to do 50 percent of capacity for a while,” he said, noting that systems have had limits installed to quit after selling that certain number of tickets. Shields have also been erected to protect staffers and customers at critical points of interaction.

He said customers will be asked to stagger seating, though noted that it is difficult to chart that out when people may come to movies in different-sized groups. It’s also hard, he noted, to block off seats that people often take after the lights go down.

“We’ll be finding a way to require that people socially distance,” he said, but added, “I think this may take care of itself a little bit because we’re not sure there will be huge crowds when we first open back up. We hope folks will turn out, but we just don’t know for sure.”

Boggs said he’s been lucky to hang on to much of his staff, many of whom are students.

He stressed, “Customers will have to wear masks, that’s mandatory. If they’re walking in the common areas, they need to be wearing a mask. We will have masks available if they don’t have one and of course, all our staff will have masks and be doing frequent cleaning.”

At Regal, a local manager would only say that it was reopening, and referred a reporter’s questions to a corporate media office. Calls to that office were not immediately returned.

But the theater chain’s website listed a raft of procedures in place during COVID, from a reduction in the number of food options available to the closure of every other register selling food, to the suspension of self-service condiment stands and refills on drinks and popcorn.

It also notes that masks will be required, and that those who don’t comply will be asked to leave, though allowed to return if they put on a mask. Staffers will be screened for any sign of temperature or illness each day and assigned seating will be used to maintain social distancing in the theaters.

Joye B. Moore on turning a family recipe into an expanding business

Joye B. Moore on turning a family recipe into an expanding business

How to decide what kind of business to open

How to decide what kind of business to open

The Pier relaunches under new ownership in downtown Culpeper

Joye B. Moore kept pinching herself in the past week to make sure she wasn’t dreaming as her Joyebells Sweet Potato Pies landed on the shelves of area Food Lion stores.

3 Reasons to Claim Social Security at Your Full Retirement Age

Not sure when to sign up for benefits? Here's why your precise full retirement age is a good choice.

King George looks into banning retail sales of marijuana by 2024

With Virginia legalizing the recreational use of marijuana by adults, King George voters would have to approve a measure in a referendum to ban its sale in the county.

By this time next year, the iconic “red barn” known as Country Store Antiques will no longer define the Route 29 / Route 33 intersection in Ruckersville. For Chip and Sally Taylor of The Copper Poppy, the looming demolition of the Country Store meant decision time for their small antique store business—and the couple decided the time was ripe to strike out on their own. The Copper Poppy now occupies the old Boot’vil location at 8633A Seminole Trail, between Little Ceasar’s and the Trail Motel.

Pay raise: Virginia's minimum wage goes to $9.50 per hour on Saturday, with more increases in the next two years

Some Virginians will be getting a pay raise, thanks to an increase to the state’s mandatory hourly minimum wage.

Mary and Neil Seek, owners of Seek Lavender Farm in Culpeper, cut the ribbon Friday afternoon in celebration of their new Little House, where …

Gordonsville’s First Fridays event series is returning Friday, May 7, the latest of nearly a dozen scheduled events through 2021. The series was created by Main Street Events LLC, a collaboration between local business owners Sunnie Capelle, Anthony Herring and Beate Casati, in 2020.

Ramps, which are native to the Appalachian region, have grown increasingly popular, particularly in the culinary world. Experts say the intense interest in ramps, along with their limited window of availability each year, put them at risk of being over-harvested.

Chris Boggs, general manager of Marquee Cinemas in Southpoint, posts movies and showtimes behind the ticket counter of the Spotsylvania County business on Wednesday, Aug. 19, 2020.

Coronavirus-related signage is posted throughout Marquee Cinemas in Spotsylvania County.

Chris Boggs, general manager of Marquee Cinemas in Southpoint, preps the theater for its Friday re-opening on Wednesday, Aug. 19, 2020.