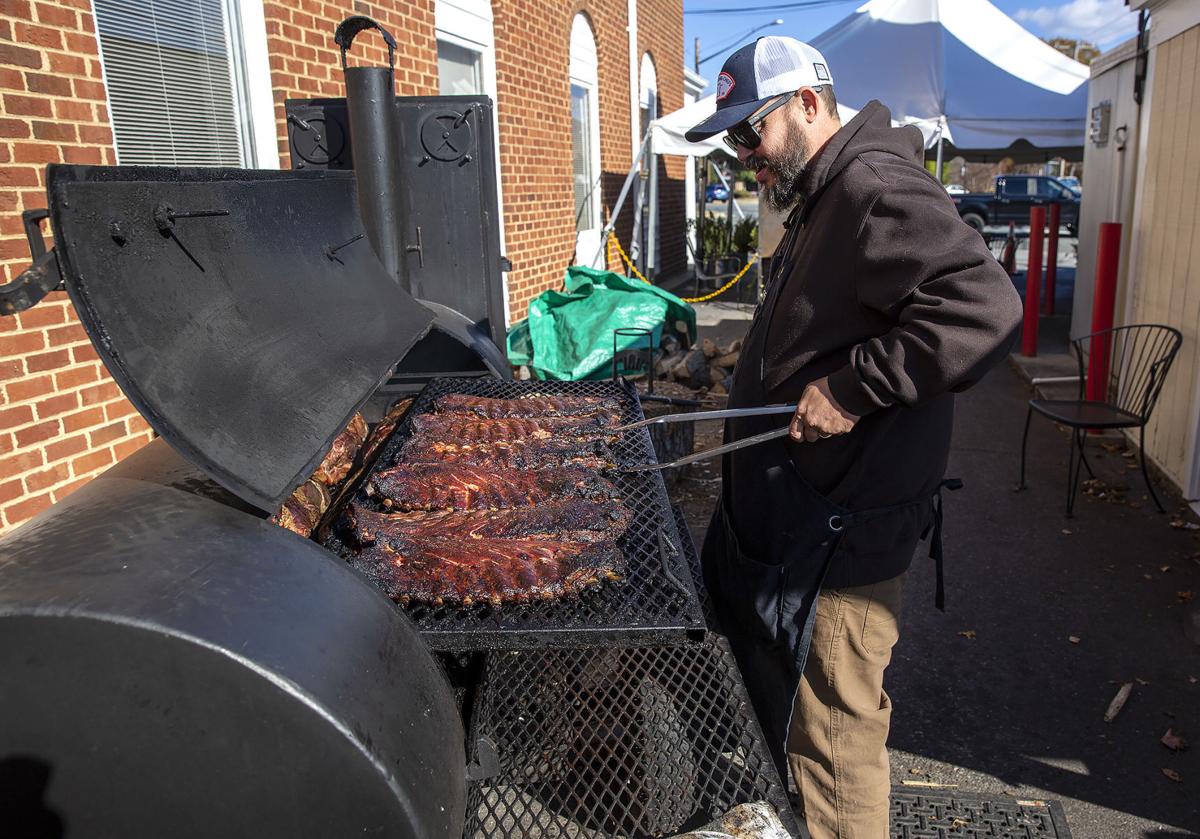 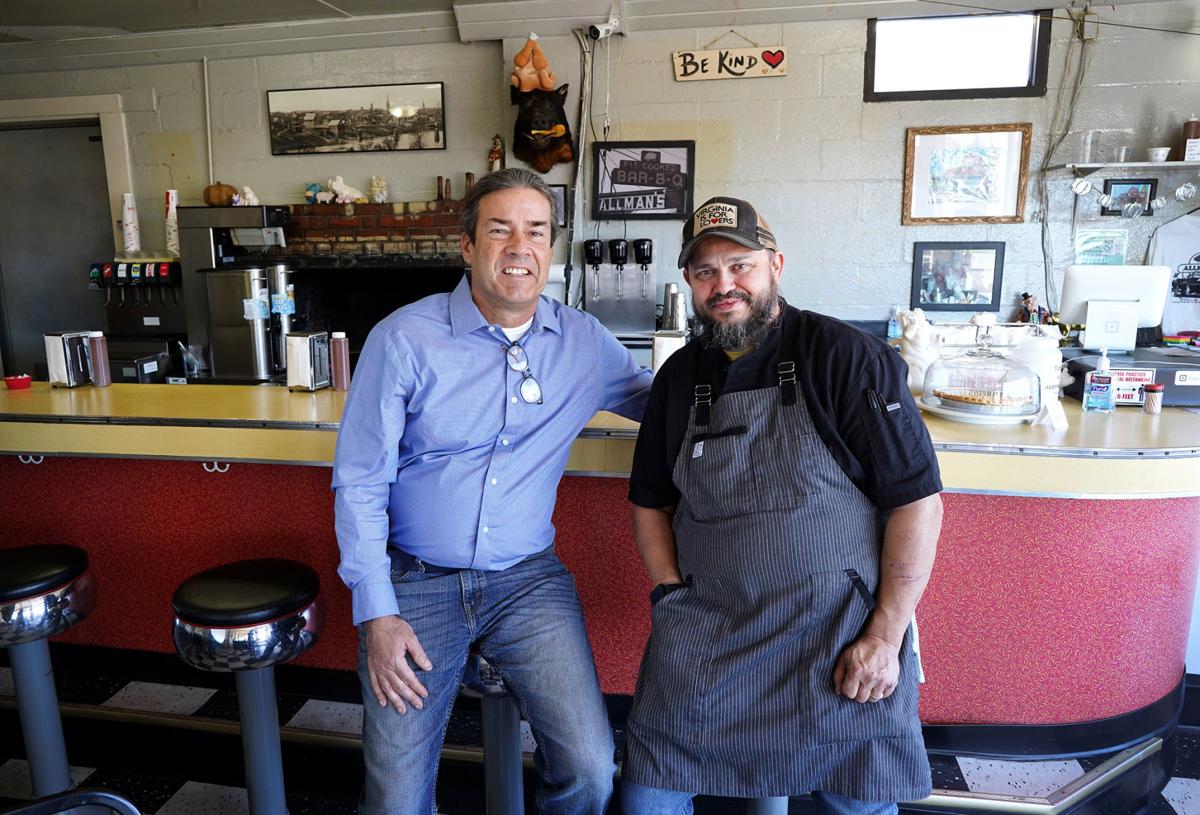 Matt Haney (left) and Matt Deaton are now partners in Allman’s. The popular city eatery has gone back to serving smoked meat. 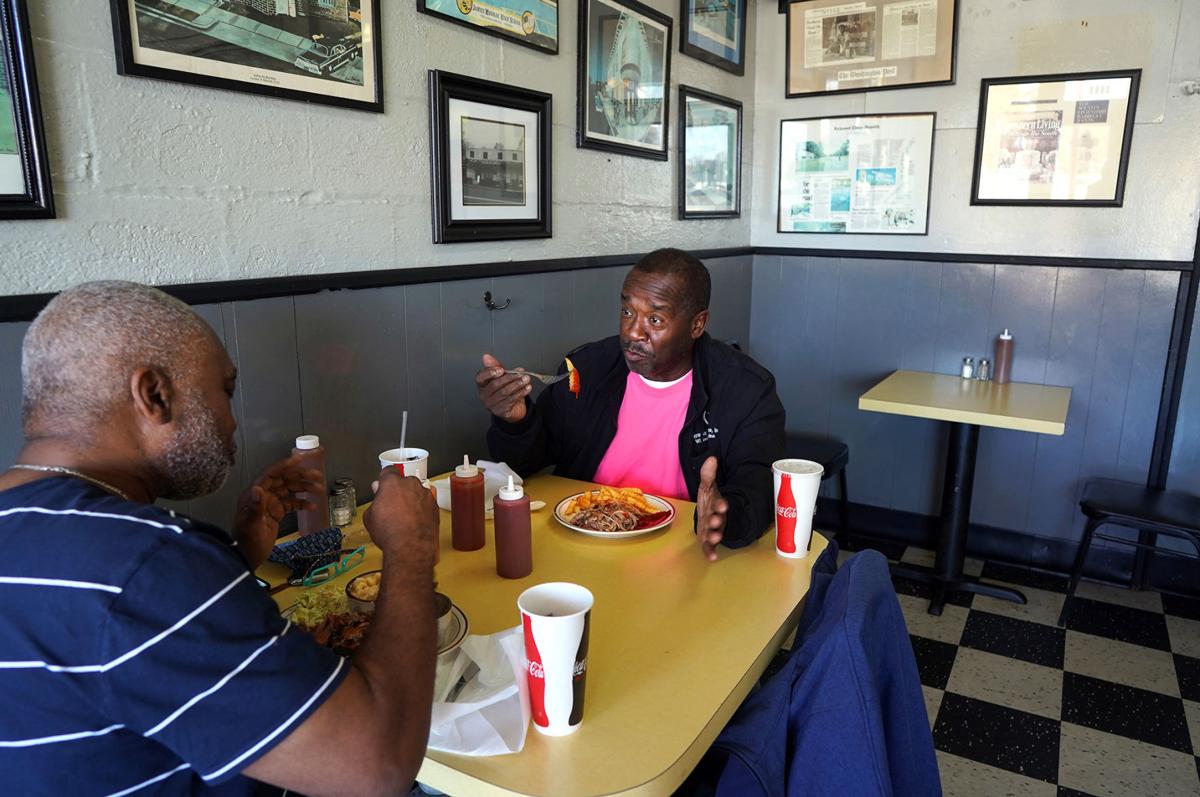 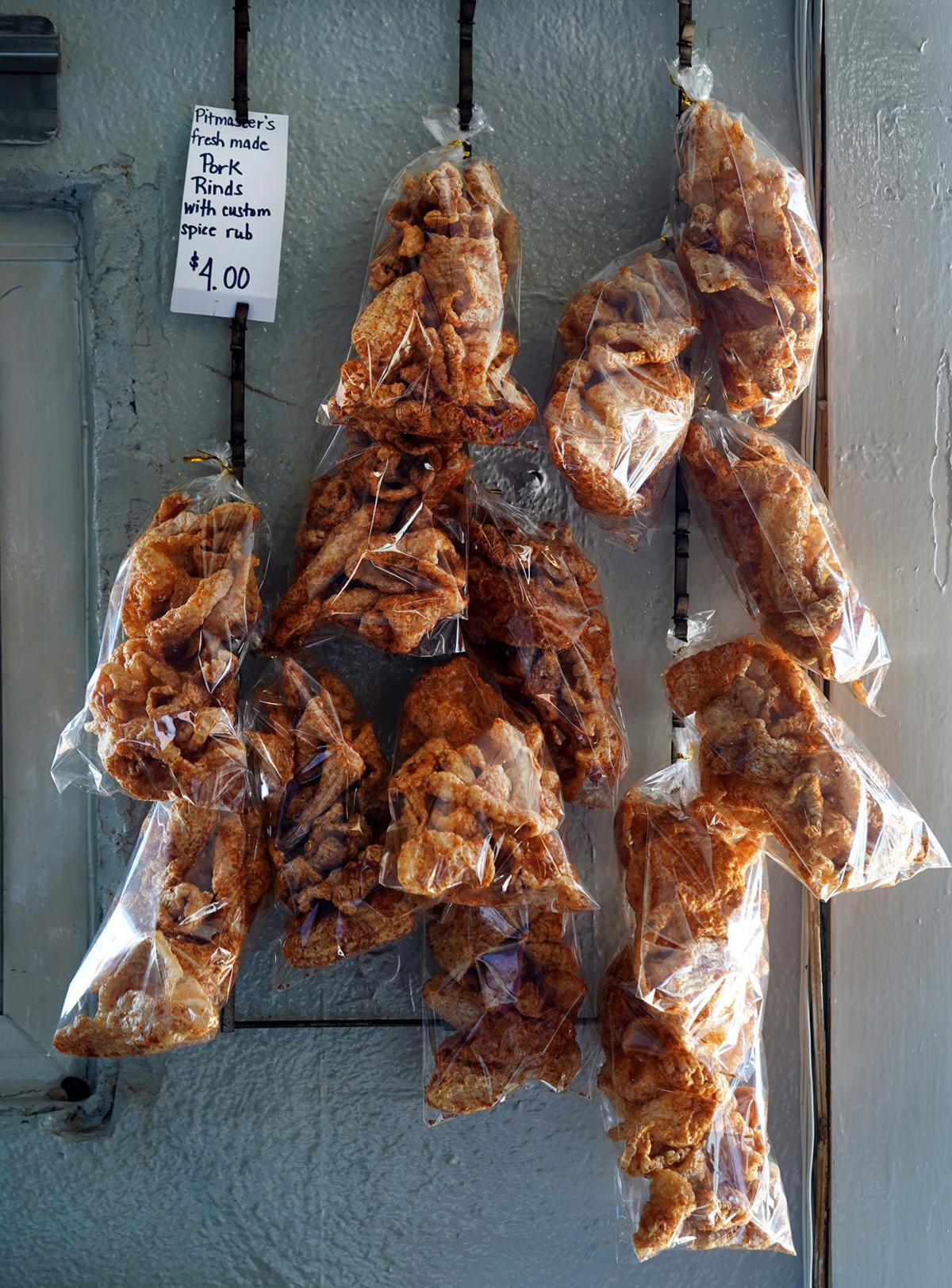 Pork rinds with a special spice rub are among the custom-made offerings. 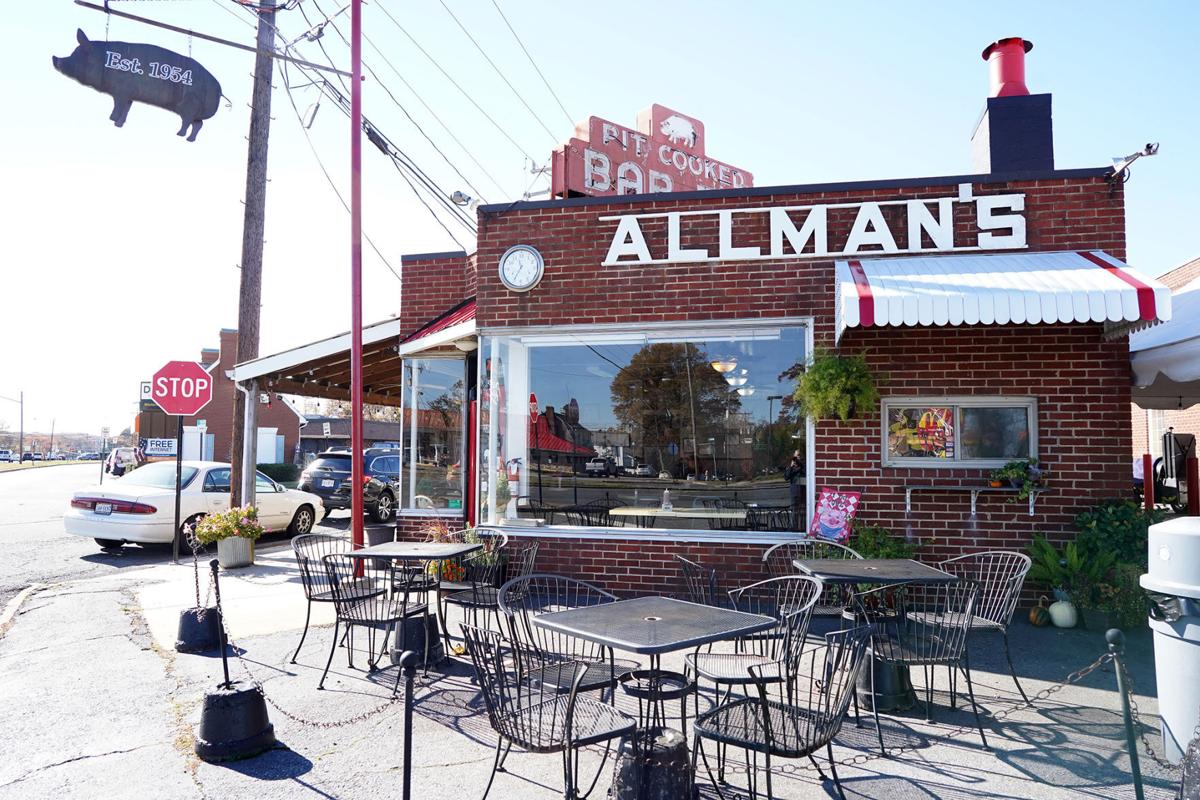 Allman’s has been located in the same spot on U.S. 1 near the University of Mary Washington since opening in1954. 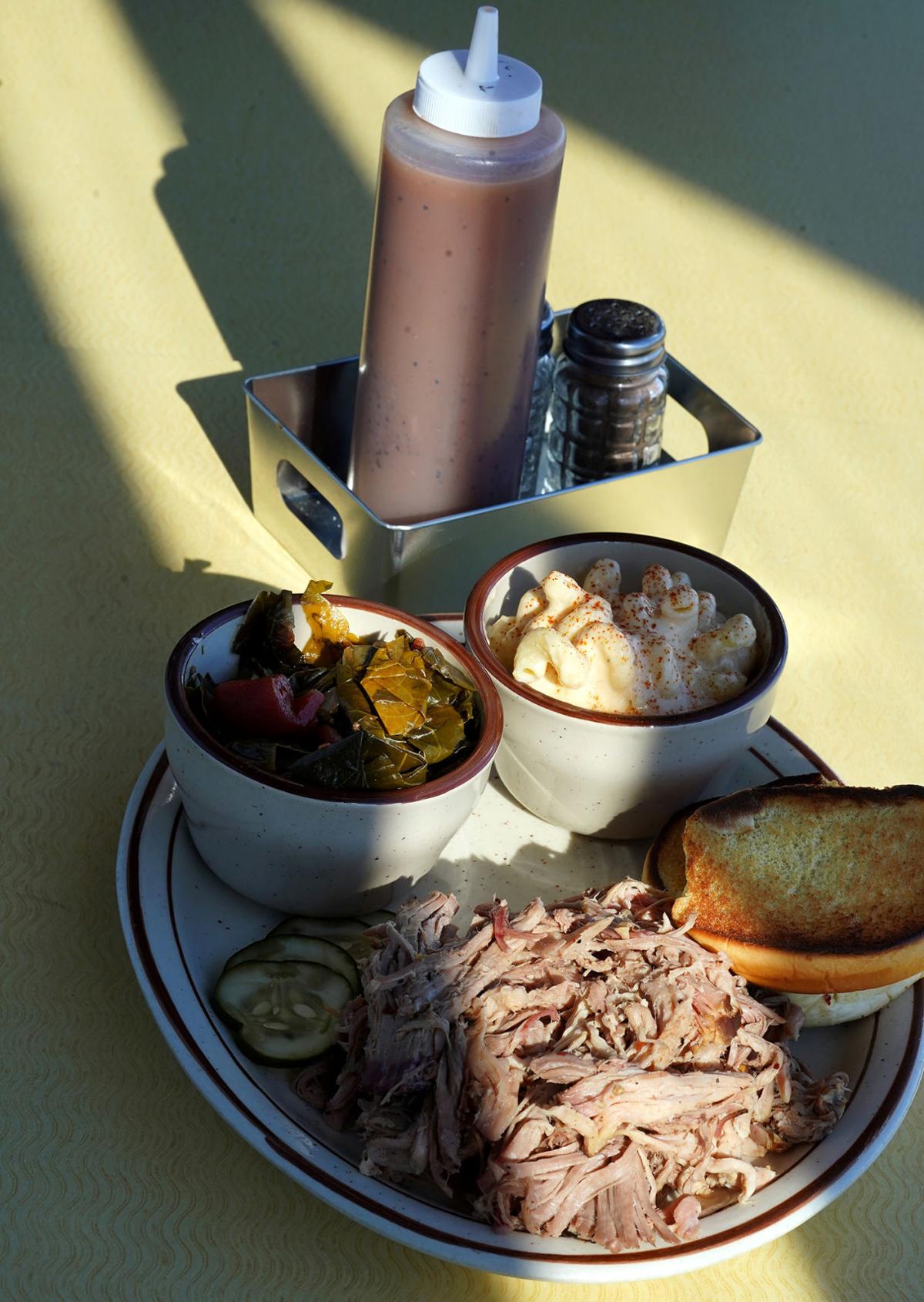 Allman’s has kept original recipes for coleslaw, collards, mac and cheese and sauce.

It starts with a single log of Virginia oak, nestled atop a kindling cracker and split with all the subtlety of a sturdy mallet.

On a blustery Friday morning in November, Matt Deaton opens the fire box and quickly adds a few chunks of seasoned wood. Within moments, it will catch and smoke will snake up and around before mingling with a half-dozen racks of ribs and whole pork shoulders.

These are the flames of barbecue revival. They’ve been stoked thoughtfully—lovingly—by Deaton, a veteran pitmaster who joined Allman’s as a partner two months ago.

The history of Allman’s Bar-B-Q sets it apart from any local establishment not named Carl’s Frozen Custard. James Allman opened his namesake restaurant in 1954—serving pork cooked inside the building’s fireplace—and it’s been a Fredericksburg fixture ever since.

But it was Allman’s future amid a rapidly changing dining scene that spurred current owner Matt Haney to bring in Deaton. Their challenge: to straddle that fine line between institution and innovation.

“The restaurant business is just different now,” said Haney, whose father bought Allman’s from Pete White—James Allman’s son-in-law—in 1986. “There’s more options, and frankly there’s better fare than there used to be. I knew we needed some change, some improvement in the food.”

It starts with smoke, which has been conspicuously absent from Allman’s meats for several decades. In the late 1980s, Allman’s switched to a cooking process that de-emphasized fire.

Deaton is bringing it back—in moderation. A veteran of the competition barbecue circuit whose previous stops included Sam Jones’ acclaimed Skyline Inn in North Carolina, he views smoke as just another ingredient in the barbecue process.

“It’s there, just like you would add salt,” says Deaton, 48. “It’s a beautiful, beautiful thing if you use it with kid gloves.”

It was that restraint that commanded the attention of Joy Crump when she hired Deaton to help launch a barbecue-themed pop-up kitchen at Six Bears and a Goat Brewery in Stafford County. When Deaton brought a sample of his smoked meats to a meeting with Crump and her business partner Beth Black, Crump marveled at what she tasted—and at what she didn’t.

“Matt is a purist,” said Crump, a former “Top Chef” contestant who co-founded Foode in downtown Fredericksburg. “It’s really easy for people to overdo things. It’s really rare to find a smoker who approaches things with delicacy. … His meats are really, really subtle.”

The same could be said of Allman’s reworked menu, a process Deaton described as “just leveling up everything.” Every item (with the exception of crinkle fries and onion rings) is now made in-house with local ingredients.

Notable menu additions include a deep-fried hot dog and hamburger, but nearly every item has been tweaked in one way or another. Crump’s buttermilk pies are sold by the slice at the counter. On a typical day, Deaton smokes 12 whole pork shoulders and 30 racks of St. Louis-cut ribs; the pork is sourced from a farm in North Carolina.

Allman’s is now open on Sundays (closed Mondays), and Deaton struggles not to get ahead of himself when teasing his plans for a barbecue-themed brunch menu.

“I’m trying not to be too artsy,” he says with a chuckle, “as much as I want to be artsy at times.”

And therein lies the challenge. Some Allman’s customers have been coming here for generations, and would just as well keep any change reserved for the pay phone that remained next to the register well into the 2010s.

“I’ve learned to deal with rejection,” Deaton said. “As a chef, you’ve just got to suck it up.”

Longtime customers will rejoice in the knowledge that Allman’s trademark sauce—on the sweet side with a vinegary kick—isn’t going anywhere. They’ll still have the option of ordering pork sandwiches minced or sliced (which Deaton notes is basically pulled pork).

Even Allman’s original menu board, layered with offerings from the restaurant’s storied past—“They offered buttermilk, like, as a drink,” Deaton interjected—is being refurbished by a local artist before returning to its well-worn location above the counter.

“A lot of restaurants try to fake old,” Haney said. “You can’t fake this. This is real old.”

NORFOLK—Some Virginia ABC stores are gradually recovering from distribution problems that have caused many shelves to go bare.

In past month, 41 town employees, over 21 percent of the workforce, out sick with COVID illness or exposure.

Merger of two Virginia regional banks has been called off

Merger plans between two regional financial institutions in Virginia have been called off.

Starting Monday, all Virginia ABC stories will start opening at noon due to COVID-19 and staffing issues. The change will affect all 395 ABC stores in Virginia.

Create your own style at Cleopatra Vaughn, new fashion boutique in Culpeper

The following highway work is scheduled, weather permitting, in the Culpeper District during the next week. Traffic movements may be restricte…

A Republican state senator says the office of Gov. Glenn Youngkin notified him that the new governor will sign a bill to end campaign donations from regulated electric monopoly Dominion Energy should the legislation reach his desk.

An early test of Gov. Glenn Youngkin's tax policy looms after a House committee adopted a retroactive tax break for businesses that received federal emergency aid two years ago, adding $110 million to the price of a new tax policy that already would reduce state income tax revenue by $195 million.

The top-selling brand of chewing tobacco in the United States — a brand long associated with Richmond’s tobacco industry — is changing its name and removing a stereotypical image of a Native American from its product packaging.

How to avoid being scammed while using payment apps

How to avoid being scammed while using payment apps

How long you should keep your tax documents

How long you should keep your tax documents

Matt Haney (left) and Matt Deaton are now partners in Allman’s. The popular city eatery has gone back to serving smoked meat.

Pork rinds with a special spice rub are among the custom-made offerings.

Allman’s has been located in the same spot on U.S. 1 near the University of Mary Washington since opening in1954.

Allman’s has kept original recipes for coleslaw, collards, mac and cheese and sauce.