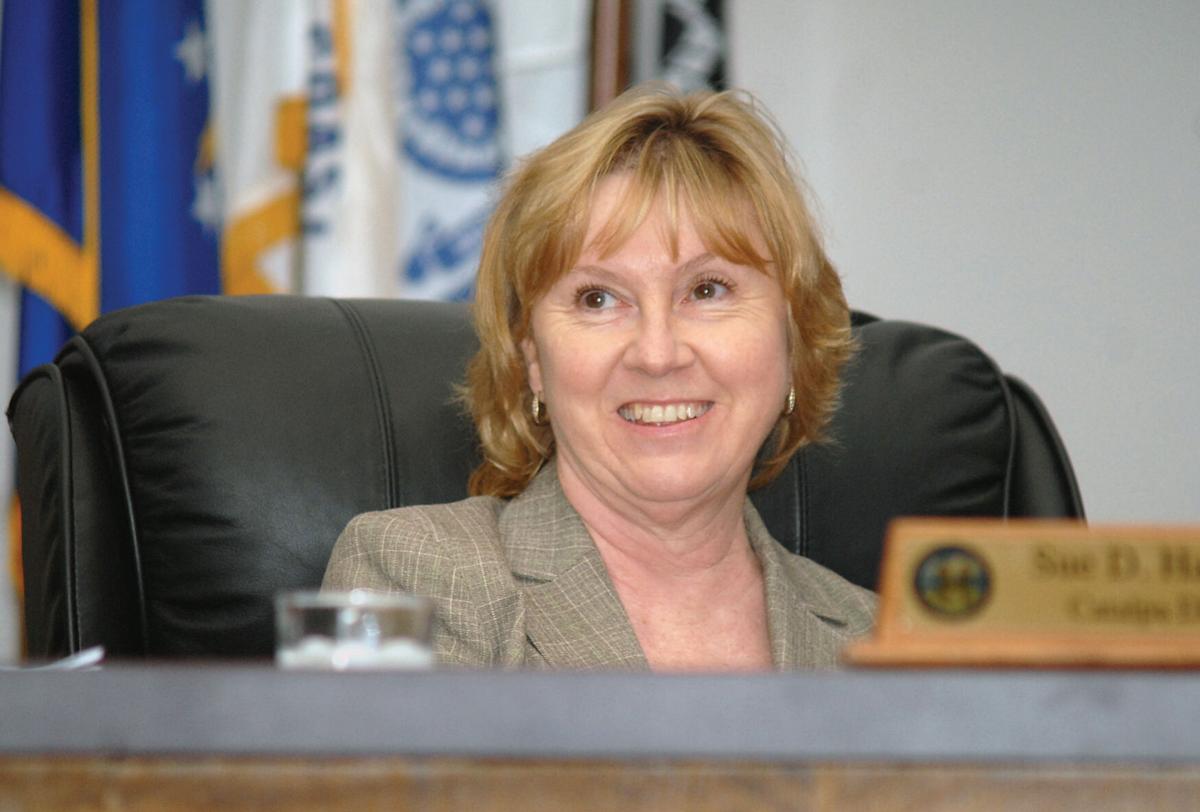 Sue Hansohn serves on the Board of Supervisors in 2011. 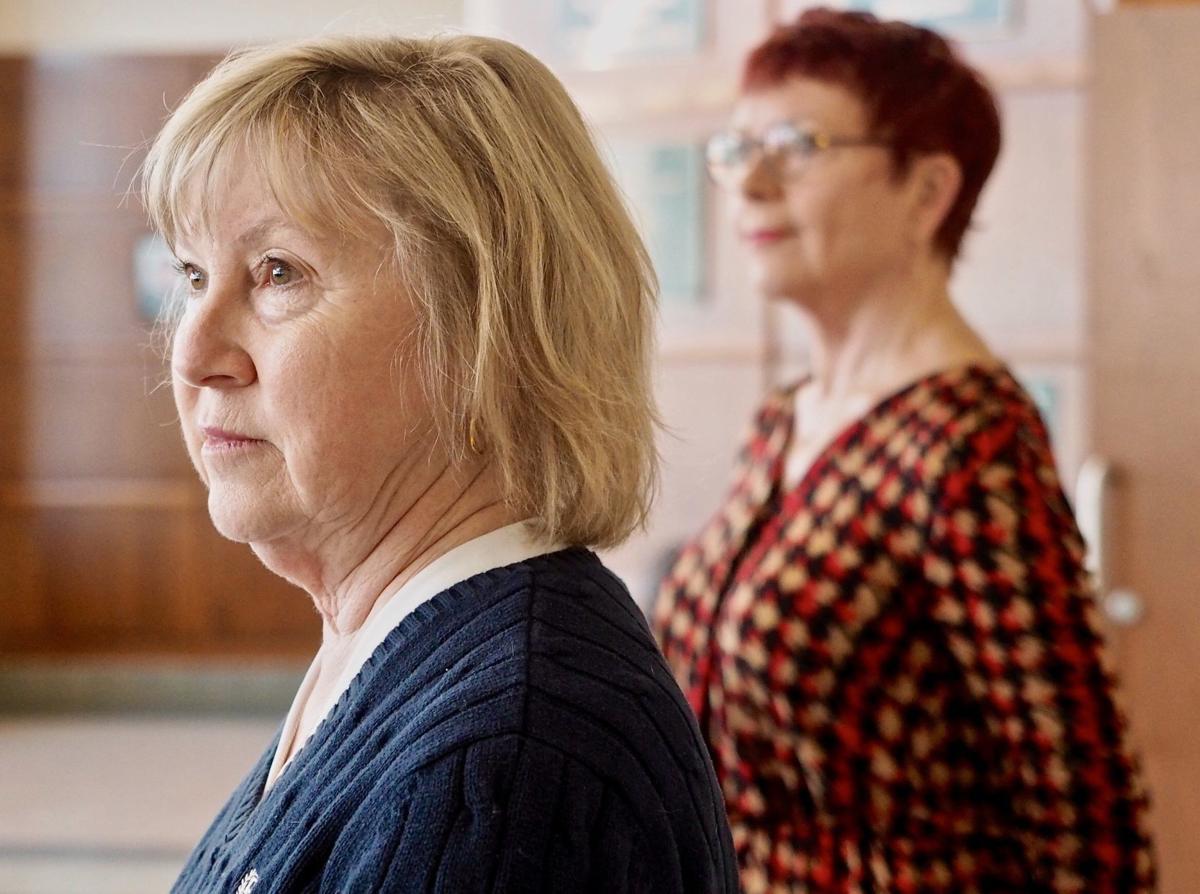 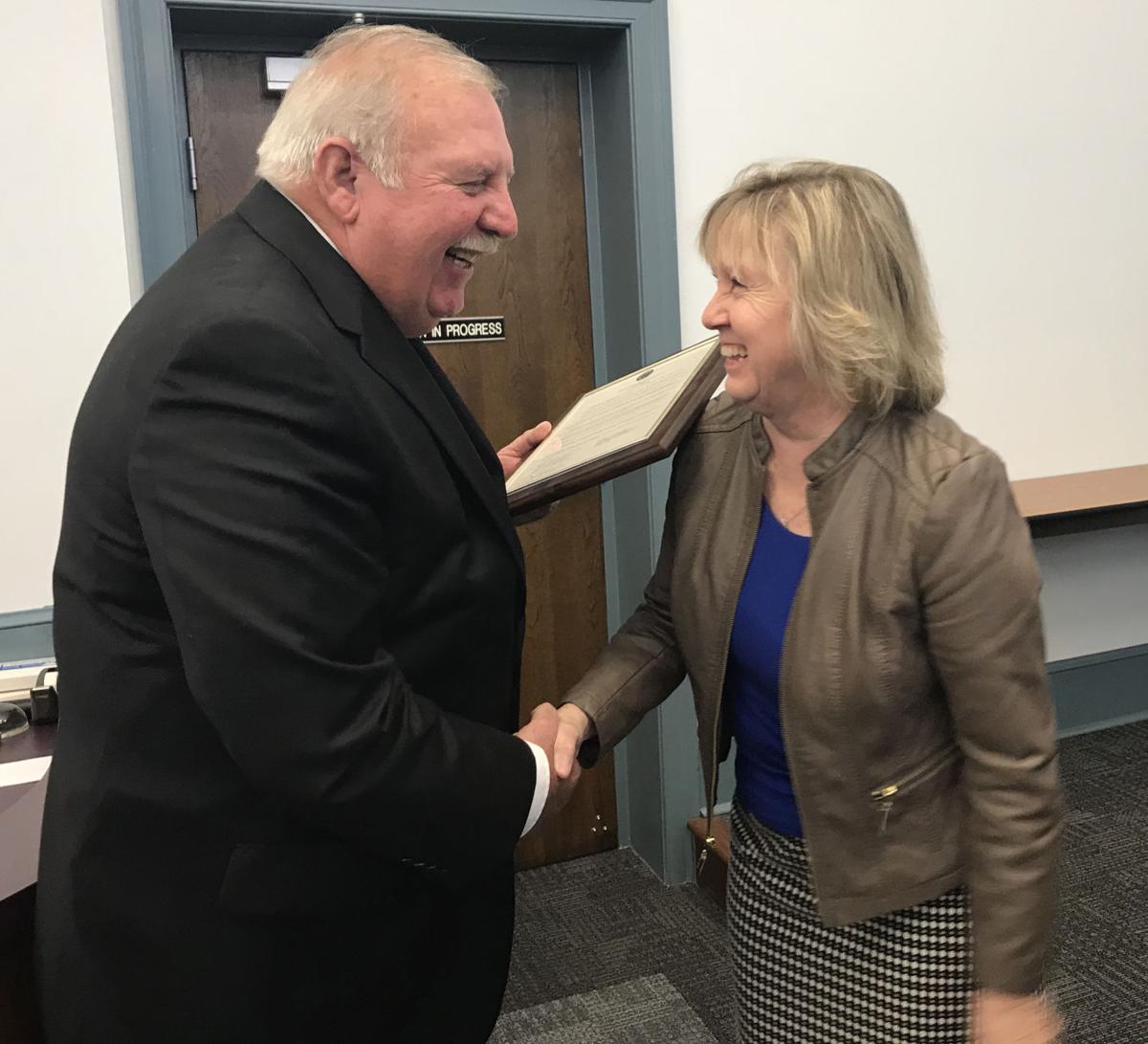 Culpeper County Supervisor Sue Hansohn (right) receives a resolution of appreciation last year from Board Chairman Brad Rosenberger recognizing her 24 years of service on the elected board. Hansohn did not seek reelection this year, but will continue to be invovled in various community activities related to career & technical education and human services. 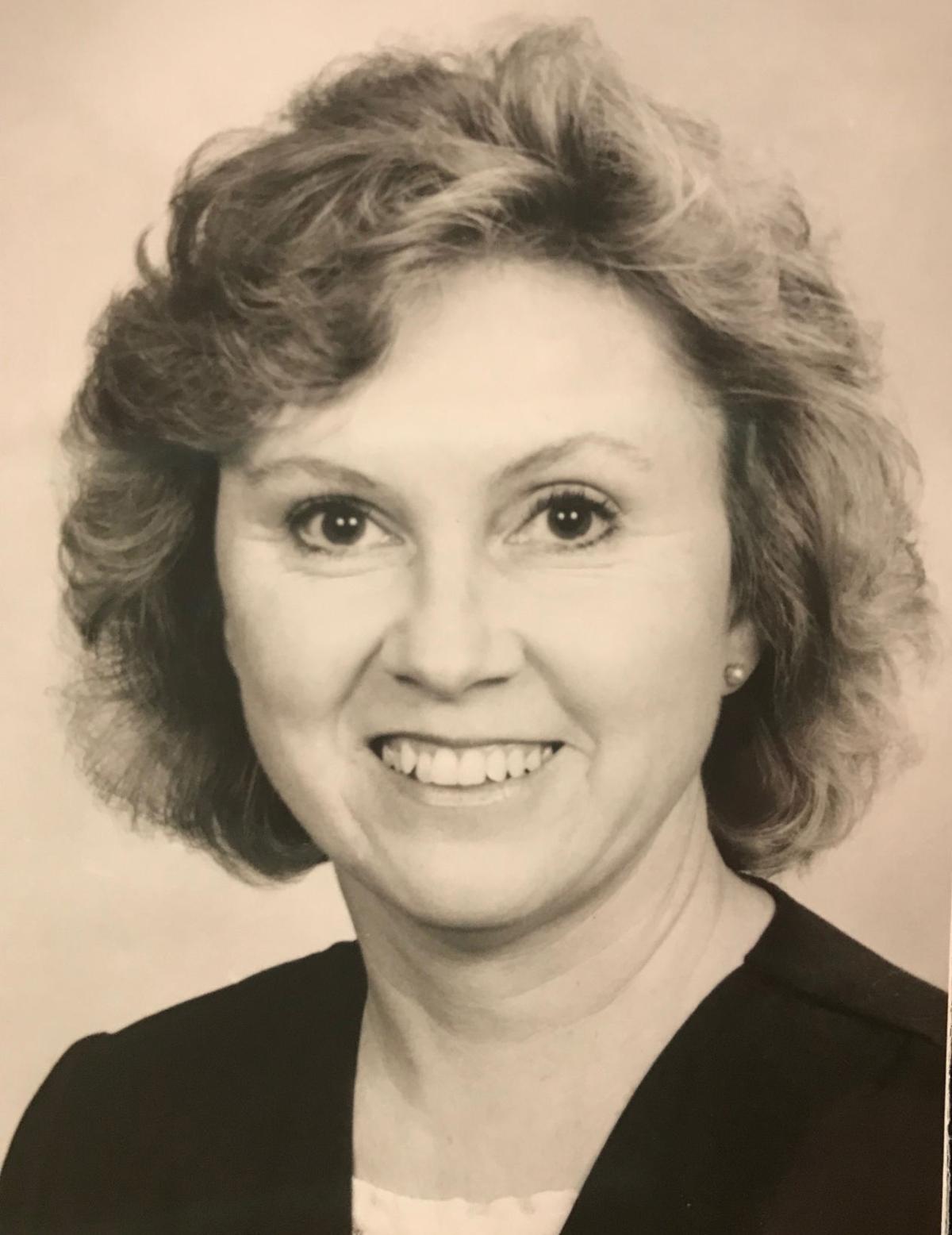 Sue Hansohn was first elected to the Culpeper County Board of Supervisors in 1995. 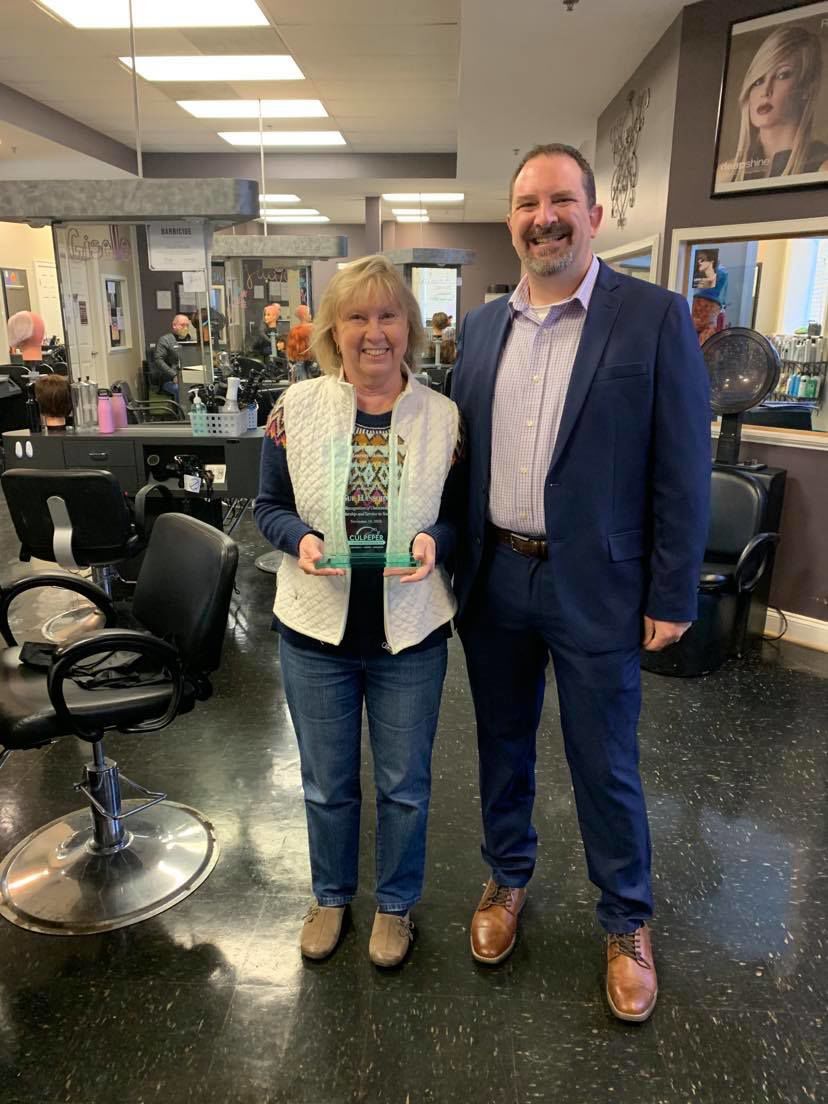 2020 L.B. Henretty Award Winner Sue Hansohn with Culpeper Chamber of Commerce CEO Jeff Say, pictured in the Culpeper Cosmetology Center, at which she is director.

Sue Hansohn embodies community service and hometown spirit. Her easy smile makes everyone feel included. She knows how to get things done, often employing compromise to reach an end goal.

Hansohn cares about instilling education as a means to a better life.

For a lifetime of giving back, the former longtime county supervisor on Thursday night received the most prestigious honor bestowed by the Culpeper Chamber of Commerce—the L.B. Henretty Memorial Outstanding Citizen Award.

Chamber President & CEO Jeff Say surprised Hansohn with the award inside Culpeper Cosmetology Training Center, where as director she assists with earning industry credentials and employment.

The honor goes annually to someone who has made an amazing contribution to Culpeper, he said, adding he could not think of a more fitting recipient for the 2020 award.

“This is very shocking,” Hansohn said, clearly emotional. “Very appreciative. What I do is what anybody can do—you just see a need and you just work forward with people—it’s a collaboration. It’s never just one person.”

A theme of stronger together pervaded Thursday’s online presentation honoring local business and nonprofit leaders in a year where unity has been needed more than ever.

A Culpeper County native who has spent her life making it a better place to live, work and raise a family, Hansohn grew up in Raccoon Ford and was first elected to the Culpeper County Board of Supervisors in 1995 as representative for the Catalpa District.

She served six terms and spent nearly a quarter of a century on the board, including stints as chairwoman, before stepping down last year, calling it the best thing she’s ever done. During her 24 years, she supported many investments in public schools, including the now-under-construction Culpeper Technical Education Center.

Hansohn was on the board of Germanna Community College when it opened the Daniel Technology Center in Culpeper and has worked with Piedmont CRUSH to stamp out heroin abuse. She supported creation of a Culpeper County Drug Court, still in the works.

“It’s not that much money if it saves one life,” she said last year in hearing potential county costs for the program. “We have to look at the health of the people.”

Hansohn has been long active in promoting technical training through her work leading the New Pathways machinist training program and in her role as director for more than a decade at Culpeper Cosmetology Center.

“The school is a blessing,” she said Thursday night of the downtown cosmetology center graduating about 20 students annually. “For some of them, it’s like their second chance.”

Hansohn helped solidify a partnership with Germanna and New Pathways, located on the Carver Center campus. The program is always looking for new students, she said, taking her time in the spotlight to highlight the career training programs.

“There are some grants there, now you can come to school for free, part-time, two days a week for couple of hours and end up with some credentials allow you to start in machinist world,” she said.

Hansohn, clearly moved at getting the top award, said, “This is fabulous. Thank you guys—I’m surprised.”

She shifted the focus outward in typical fashion: “It’s about the students. It’s about the community, not the person,” Hansohn said, instructing the cameraman to, “Cut!”

Hansohn, during her tenure on the board of supervisors, at times stood alone for what was right. For example, in 2016, she voted with the minority to grant a utility permit to the Islamic Center of Culpeper for their new prayer house Route 229—the county’s first mosque, now nearly completed. The county could not withhold the permit routinely granted to others, including Christian churches, based on religion, Hansohn said at the time, and the Dept. of Justice agreed.

A 1969 graduate of Floyd T. Binns when it was the county’s high school, the former supervisor earned a degree in business administration from Chicago’s City College while living on an army base with her now longtime husband, Ray, in Frankfurt, Germany. Hansohn had a career in real estate before going to work in housing at Culpeper County Department of Human Services. She is mother to two grown sons and a grandmother.

“Sue Hansohn began serving our community long before her election to the board of supervisors, and as a supervisor has continued to provide dedicated, forward-thinking commitment and leadership for the county as a whole,” wrote Ian Phillips Jr. in a 2015 letter to the editor.

The Award presented to Hansohn this year is named for the late Lorenzo Bright Henretty, a conservationist with the local Culpeper Soil & Water Conservation District and local businessman. He planned and supervised construction of the Mountain Run Watershed dams and reservoir project in the 1960s and was president of the Culpeper Chamber of Commerce.

Henretty was a director at Second National Bank of Culpeper, chairman of the Economic Development Commission, Culpeper Appliances President and president of Culpeper Memorial Hospital. L.B. Henretty died in 1975.

2020 Culpeper Chamber Winners At A Glance

The Culpeper Chamber of Commerce hosted its 106th Annual Meeting & Awards Show virtually on Nov. 19. See all the highlights on Culpeper Me…

Sue Hansohn serves on the Board of Supervisors in 2011.

Culpeper County Supervisor Sue Hansohn (right) receives a resolution of appreciation last year from Board Chairman Brad Rosenberger recognizing her 24 years of service on the elected board. Hansohn did not seek reelection this year, but will continue to be invovled in various community activities related to career & technical education and human services.

Sue Hansohn was first elected to the Culpeper County Board of Supervisors in 1995.

2020 L.B. Henretty Award Winner Sue Hansohn with Culpeper Chamber of Commerce CEO Jeff Say, pictured in the Culpeper Cosmetology Center, at which she is director.