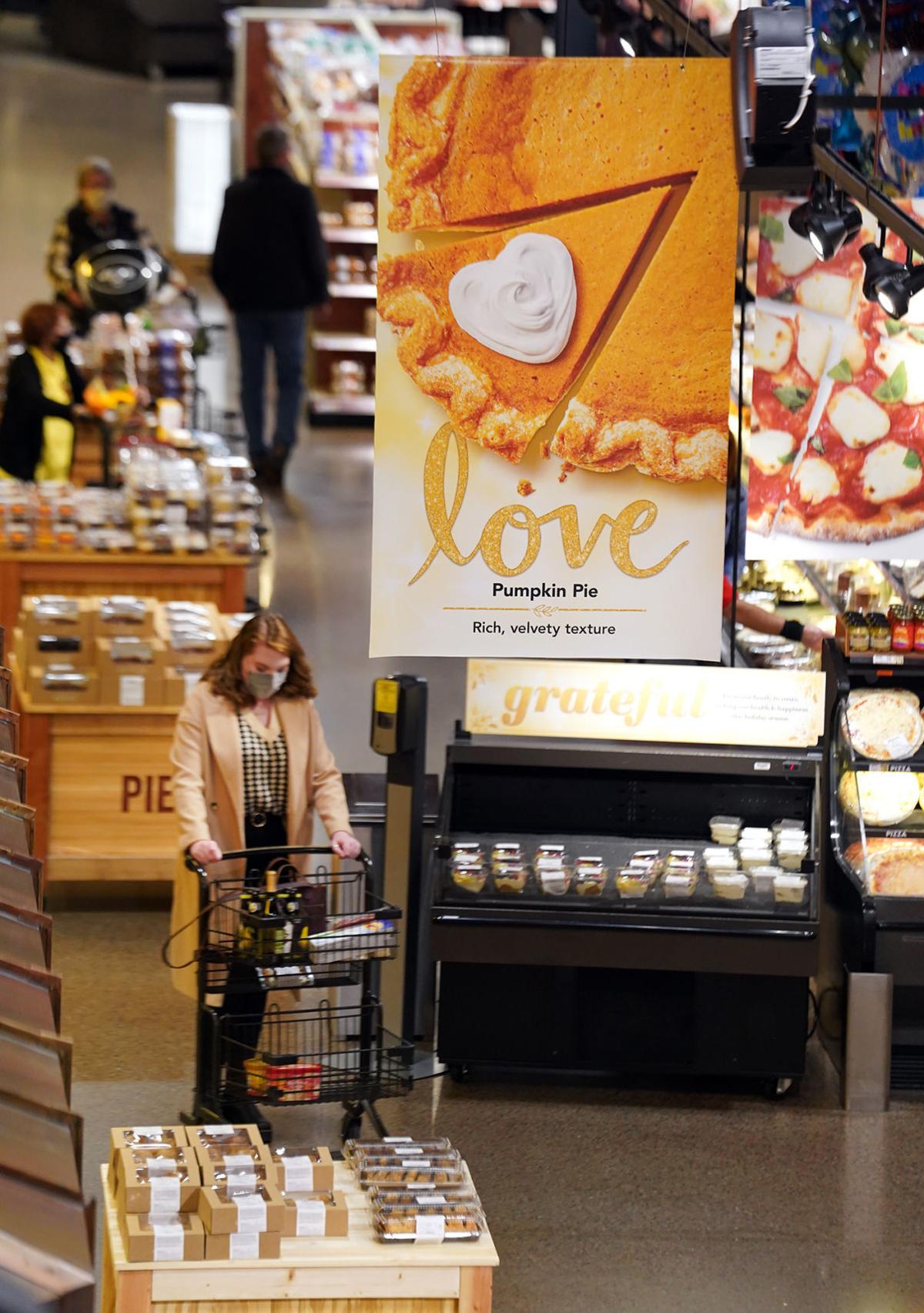 Wegman (above) and Weis noticed shoppers buying turkeys and other supplies earlier than last year. 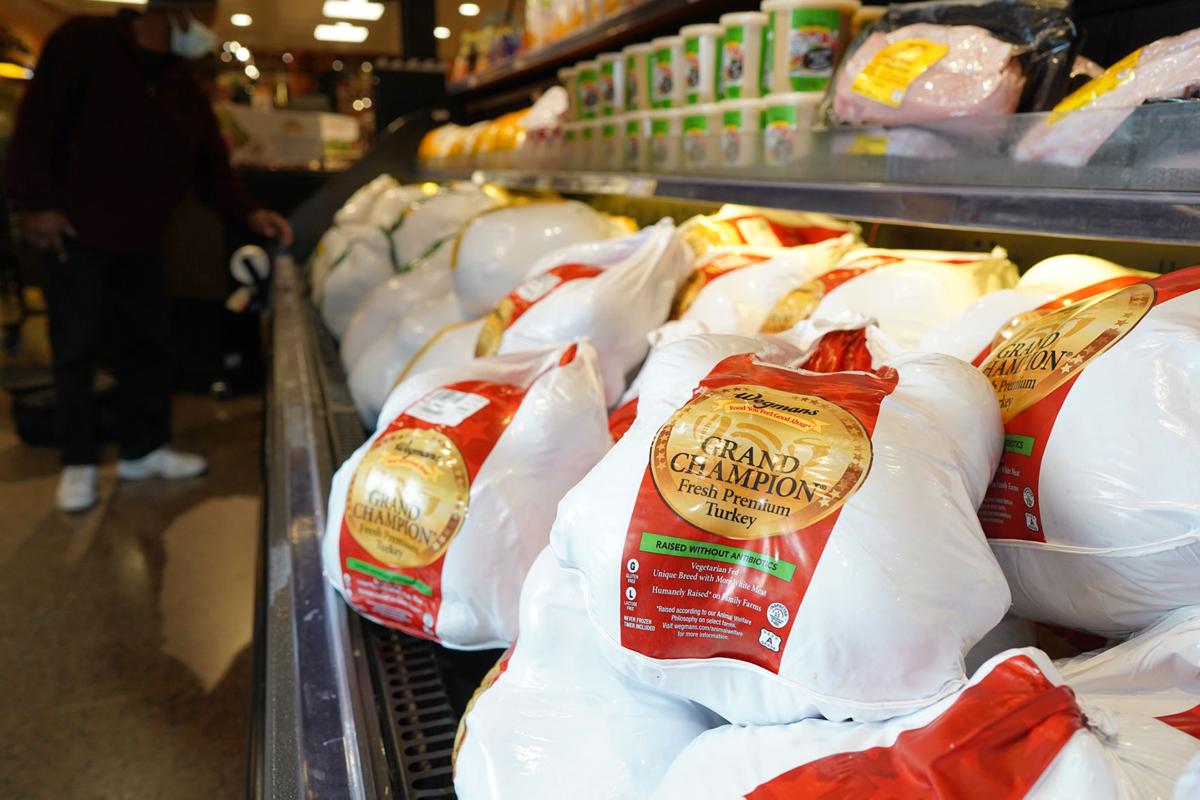 Several sizes and kinds of Thanksgiving turkeys are for sale at the Wegmans’ supermarket on Fall Hill Avenue in Fredericksburg. 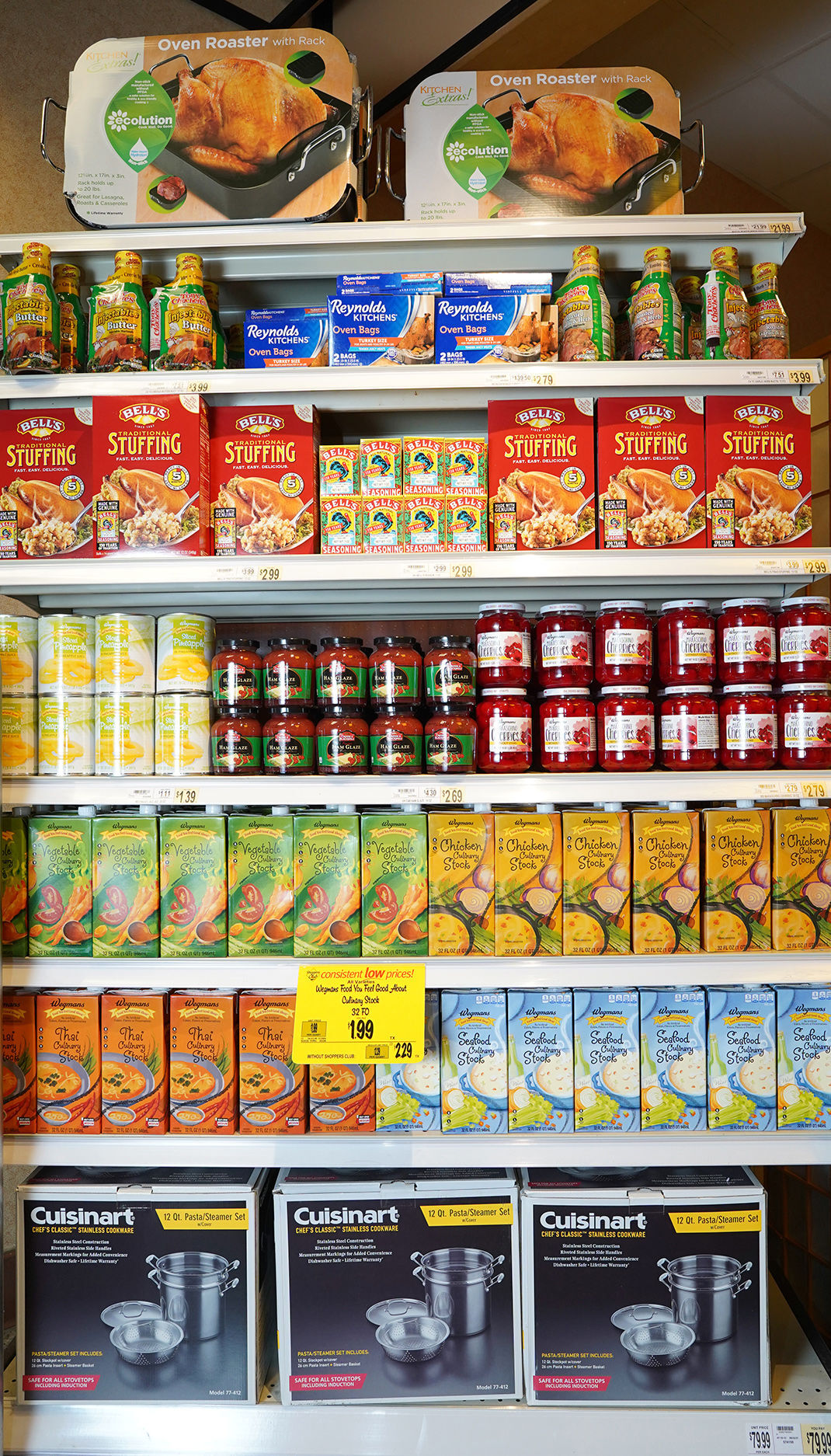 The Wegmans chain starts holiday planning in January, and its stores are well stocked for most items. 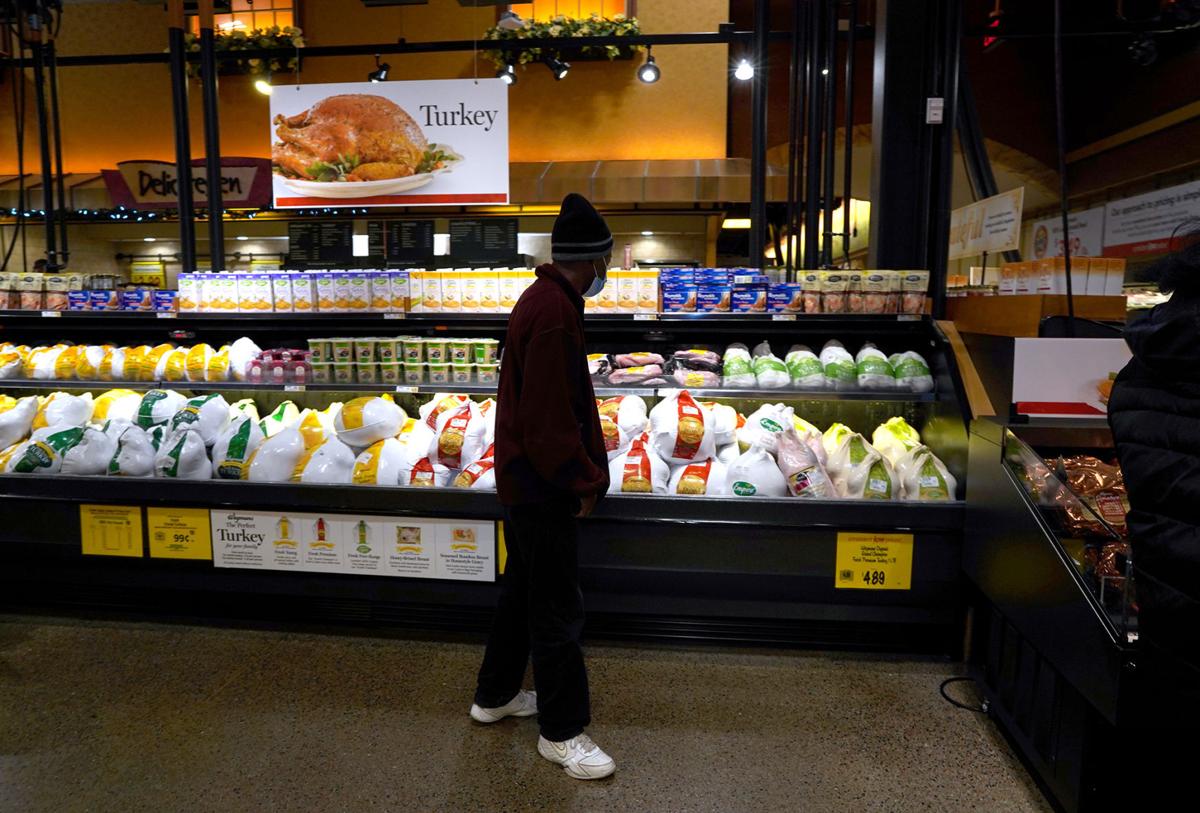 Customers are mainly looking for bigger birds this year than in 2020 when the pandemic forced many families to curtail their celebrations.

By CATHY JETT FOR THE FREE LANCE–STAR

Customers who wanted to ensure they had a turkey on their Thanksgiving table placed their order with a downtown Fredericksburg butcher shop earlier than normal this year.

Keith Lebor, who owns the Olde Towne Butcher Shop at 401 William St., said he starts taking reservations the day after Labor Day for the Amish, organic Amish and KellyBronze turkeys he sells, and usually has a few left the week of Thanksgiving. This year, he got his first inquiry in mid-August, and most were soon spoken for.

Based on his talks with suppliers and what he’s been reading in the media, Lebor said he suspects his customers decided to buy early due to concerns about supply-chain challenges. Most are regulars who depend on his store to provide the types of turkeys, geese, ducks and pheasants that aren’t normally found in chain grocery stores for their Thanksgiving dinner.

Like them, more shoppers than ever are stocking up on supplies for the holiday this year according to IRI, an industry provider of big data, predictive analytics and insights. It tracked the top 25 Thanksgiving-related grocery categories, which account for 81 percent of the $2.2 billion increase in grocery sales typically seen in the four weeks leading up to the holiday.

The study found that sales of such things as turkeys, stock, stuffing and pie fillings had increased 63 percent. In past years, the uptick during that time period was typically 45 percent. The trend accelerated in the last week of October, with a sales increase of 86 percent compared to a historical average of 54 percent.

“Following widespread media reporting on supply-chain challenges, 34 percent of consumers reported they are stocking up on certain items because they are concerned that the products might not be available the next time they shop,” Supermarket News, an industry publication, added in its coverage of the study.

Major chain grocery stores in the Fredericksburg area are noticing this trend as well. Both Wegmans and Weis Markets, for example, have seen shoppers buy turkeys and other supplies such as stuffing, cranberries and pumpkin pies earlier than last year.

“Customers are aware of raw material and labor shortages, as well as transportation constraints impacting all suppliers around the world,” said Matt Spath, who manages the Wegmans in Fredericksburg.

He said the Rochester, N.Y.-based chain starts planning for the holidays in January, and its stores are well stocked for most items, including turkeys. Customers are mainly looking for bigger birds this year than in 2020 when the pandemic forced many families to curtail their celebrations.

“For customers who are looking for those small turkeys, they should buy early,” he said. “That size is limited.”

Weis Markets, which has several locations in the Fredericksburg area, also saw “a strong increase” in turkey purchases earlier than normal this year, but it leveled off this week, said Dennis Curtin, spokesman for the Sunbury, Pa.-based chain.

“We have plenty of turkeys,” he said. “Overall, our distribution team is doing a great job helping our stores remain in stock.”

While there have been disruptions and shortages in the supply chain and at manufacturing plants, the reasons for individual shortages vary, he noted. For some, it could be that bad weather resulted in a poor harvest or they can’t hire enough workers.

Finding enough drivers to deliver goods to stores can also be problematic.

“Shortages can also be the result of changed consumption patterns,” Curtin said. “A good example is cream cheese. As a result of increased in-home dining and entertaining, there’s a significant increase in demand, particularly during the holidays. While we have cream cheese, supply is lighter than usual. In response. we put purchase limits on it due to increased demand to ensure the most possible people can buy it.”

Shoppers should expect to find fewer promotions this holiday season as a result of a reduction in the supply of traditional Thanksgiving food items, according to the IRI study. It found that retailers are running 1–9 percent fewer promotions in five Thanksgiving-related categories compared with the same period last year. Prices in those categories increased 3.6 percent on average year over year. The biggest increase was for frozen pie shells, which went up 6 percent, according to IRI’s inflation tracker.

Both Wegmans and Weis Markets say they’re trying to hold the line on price increases for such things as turkeys.

“We’re really working hard to minimize the impact on customers in terms of these items,” Spath said. “We really want to remain competitive. It’s a fact raw material shortages, labor shortages, transportation constraints, they’re impacting suppliers around the world and that does create higher costs.

“In some areas these costs have been passed on to the retailers. But we’re working really hard to stay consistent with where we were last year and make sure that we can offer the best price of these items that are important to families.”

Weis Markets’ prices for turkeys and hams are the same as last year’s. The grocery chain offers a total of 84 core items for Thanksgiving in its meat department and 75 are the same price as last year. These items include breakfast foods such as bacon and sausage since the holiday is also one of the biggest breakfast days of the year, Curtin said.

The IRI study also found that such traditional Thanksgiving staples as pumpkin and pecan pies—along with whipped toppings, frozen pie/pastry shells and liquid gravy—will be in shorter supply than normal. Availability, it said, is down 5 to 11 percentage points.

Paul’s Bakery, a local favorite supplier of Thanksgiving pies, has been telling customers to order early because it is having a tough time hiring enough people and can only make so many pies before they have to stop taking orders, said Wilma Vaughn, the human resources manager for the 48-year-old company at 2008 Lafayette Blvd.

“We’ve been taking orders for three weeks now. Normally it would begin about that time, but we wouldn’t see a great number until it got within one week of Thanksgiving. We have a lot of orders now.

“I don’t know when we’re going to have to cut off. We have to continuously check product availability and people availability. We have to see how great a service we can provide,” she said Thursday.

The bakery used to get as many as 300 applications whenever it had a vacancy, Vaughn said. Now it’s lucky to get two or three.

“I found the perfect candidate yesterday and when she told her employer she was leaving, he gave her promotion, made her a manager and gave her a significant increase in pay,” she said. “People who have good people are hanging on to them.”

Paul’s will be “crazy busy” the day before Thanksgiving, when customers come in to pick up their orders, Vaughn said. Most are regulars, some of whom order the same thing every year. Staff who spot them as they drive up often have their order ready by the time they walk in the door.

“Customers are important to us not only because of what it brings to the business monetarily, but because we get to know them personally,” she said. “The girls who work there know who’s just had a baby. They know who has relatives in town visiting their parents in town. It becomes a very personal relationship.”

NORFOLK—Some Virginia ABC stores are gradually recovering from distribution problems that have caused many shelves to go bare.

Create your own style at Cleopatra Vaughn, new fashion boutique in Culpeper

Merger of two Virginia regional banks has been called off

Merger plans between two regional financial institutions in Virginia have been called off.

Starting Monday, all Virginia ABC stories will start opening at noon due to COVID-19 and staffing issues. The change will affect all 395 ABC stores in Virginia.

The top-selling brand of chewing tobacco in the United States — a brand long associated with Richmond’s tobacco industry — is changing its name and removing a stereotypical image of a Native American from its product packaging.

The following highway work is scheduled, weather permitting, in the Culpeper District during the next week. Traffic movements may be restricte…

Manufacturer of composite decking, railing and outdoor items made from recycled materials is breaking ground on 64,000-square-foot corporate office building along I-81.

As the front desk clerk at the Garden Inn on U.S. 1 in Spotsylvania County, Debbie Tyree has witnessed all sorts of efforts to assist long-ter…

Face your financial anxiety by reframing your relationship to money

Face your financial anxiety by reframing your relationship to money

How to cut the cost of preventative care

How to cut the cost of preventative care

These are the best tips and tricks for donating to charity

These are the best tips and tricks for donating to charity

Wegman (above) and Weis noticed shoppers buying turkeys and other supplies earlier than last year.

Several sizes and kinds of Thanksgiving turkeys are for sale at the Wegmans’ supermarket on Fall Hill Avenue in Fredericksburg.

The Wegmans chain starts holiday planning in January, and its stores are well stocked for most items.

Customers are mainly looking for bigger birds this year than in 2020 when the pandemic forced many families to curtail their celebrations.