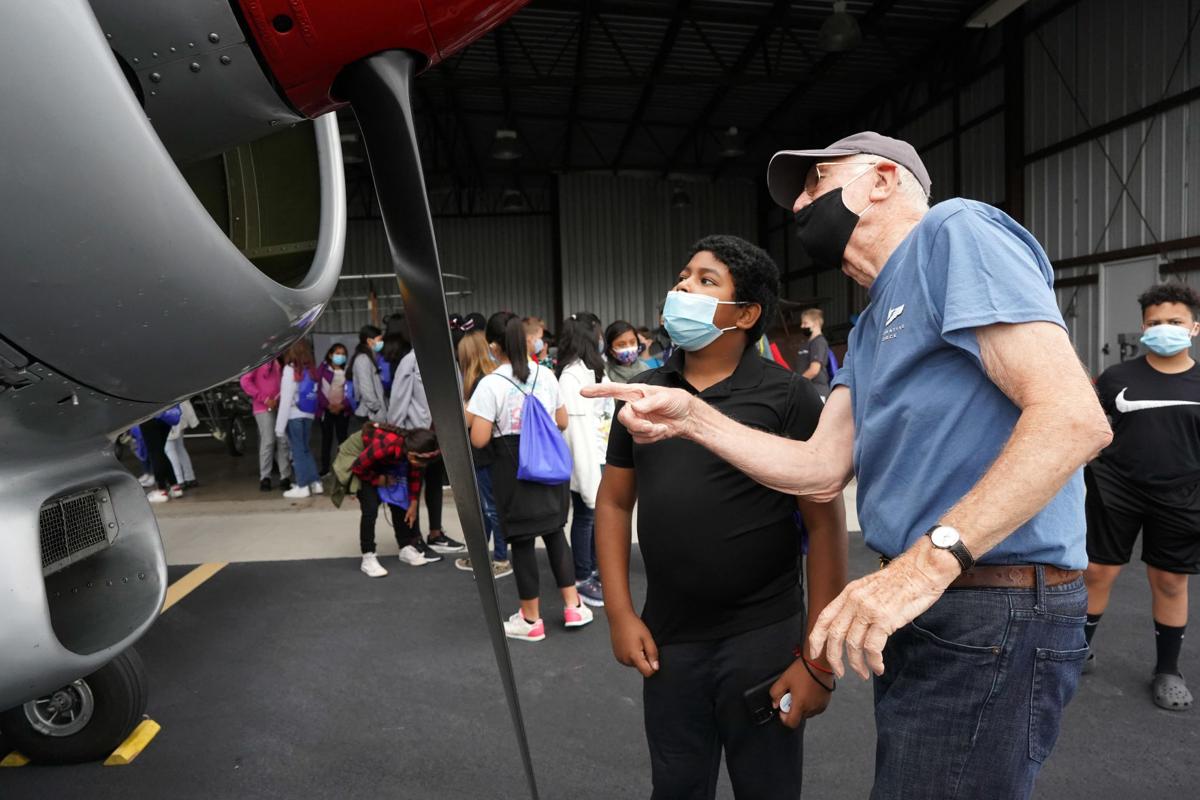 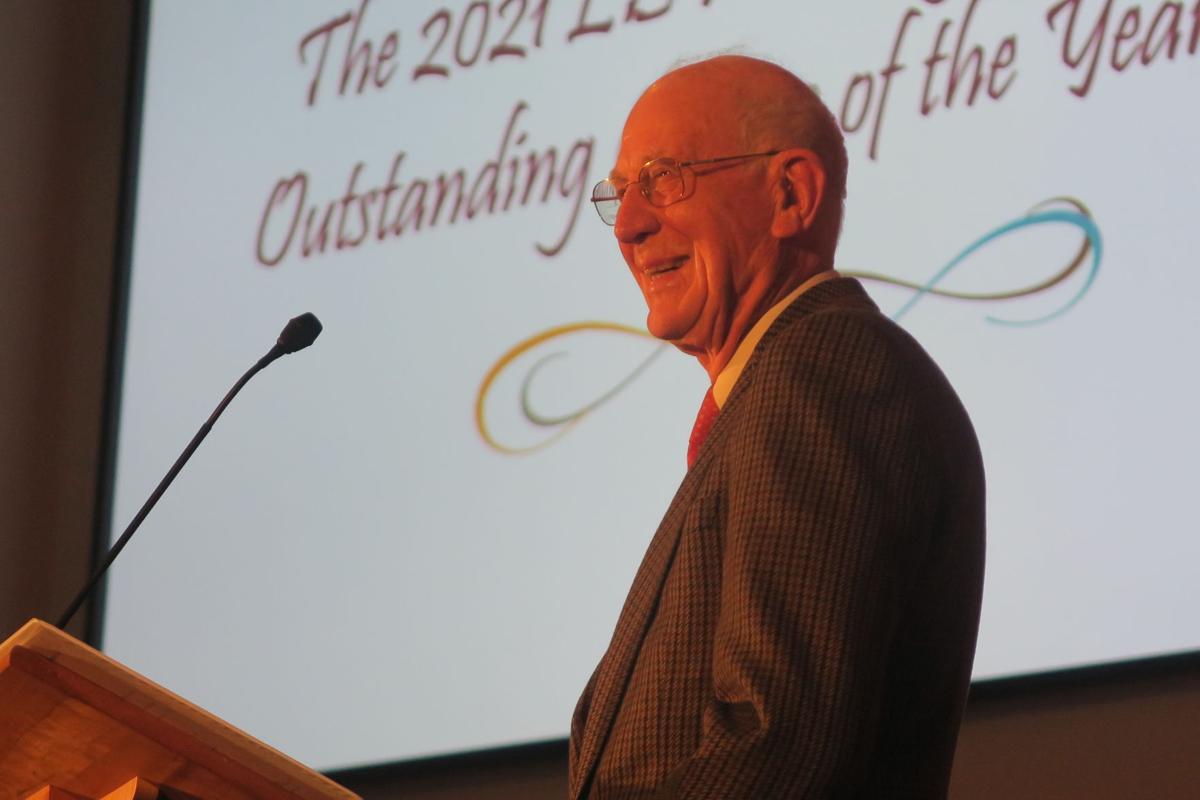 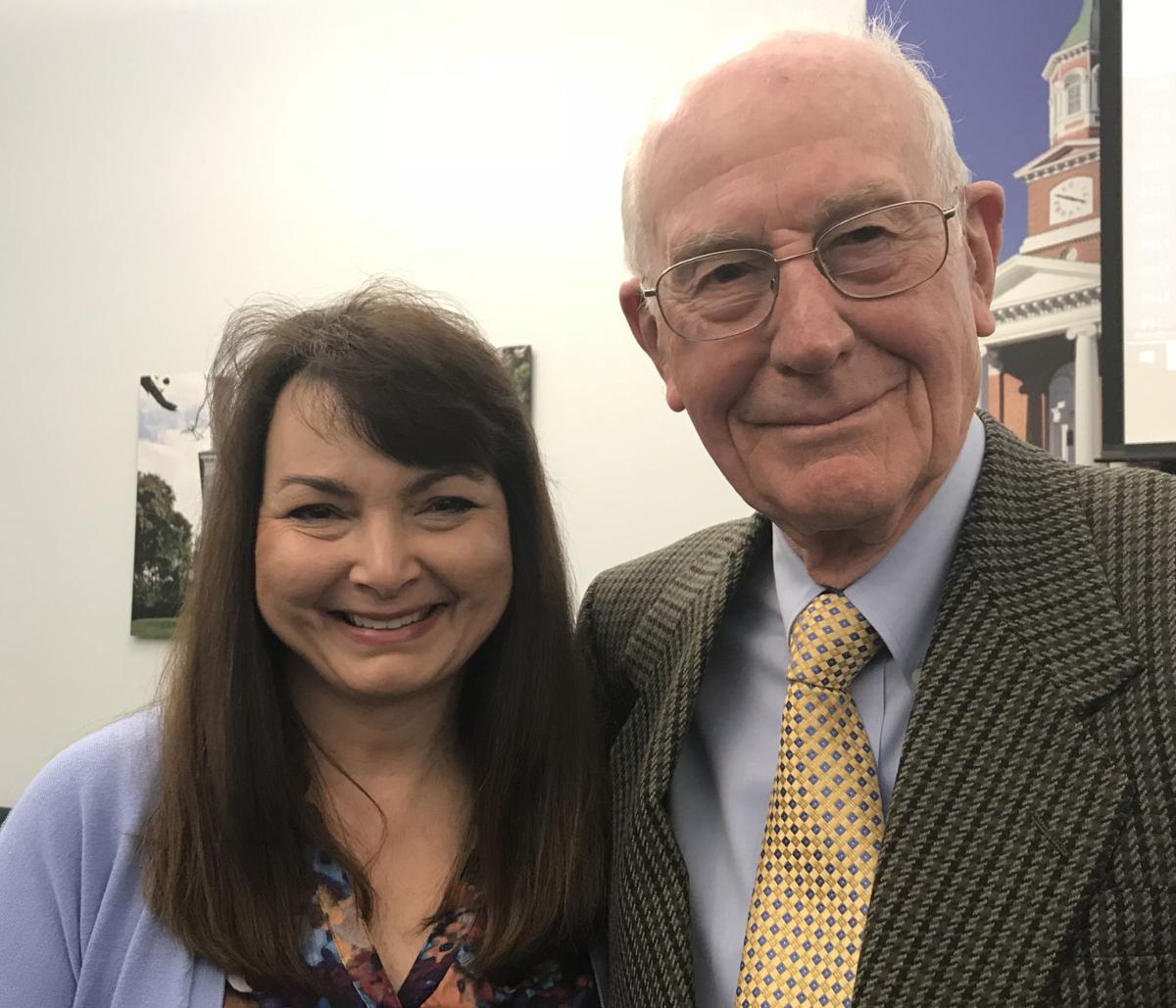 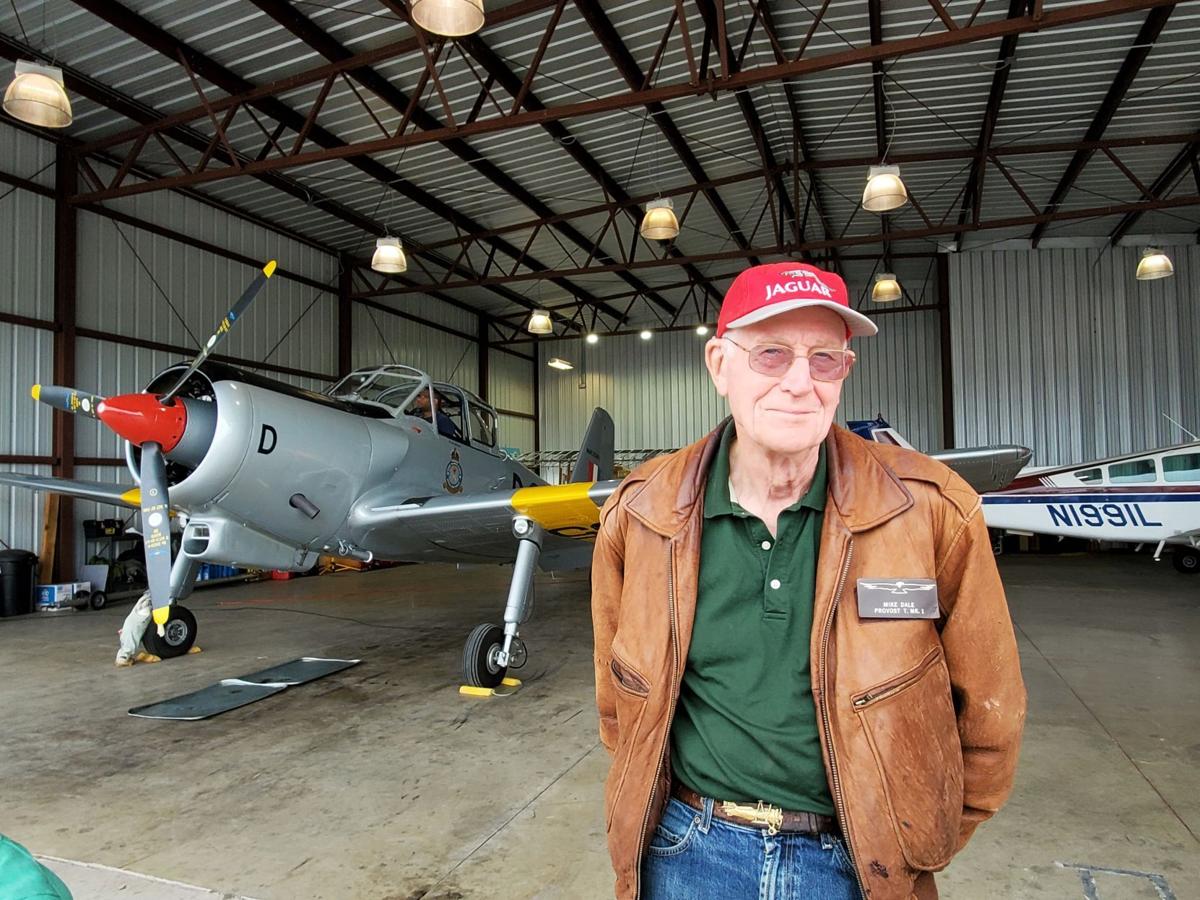 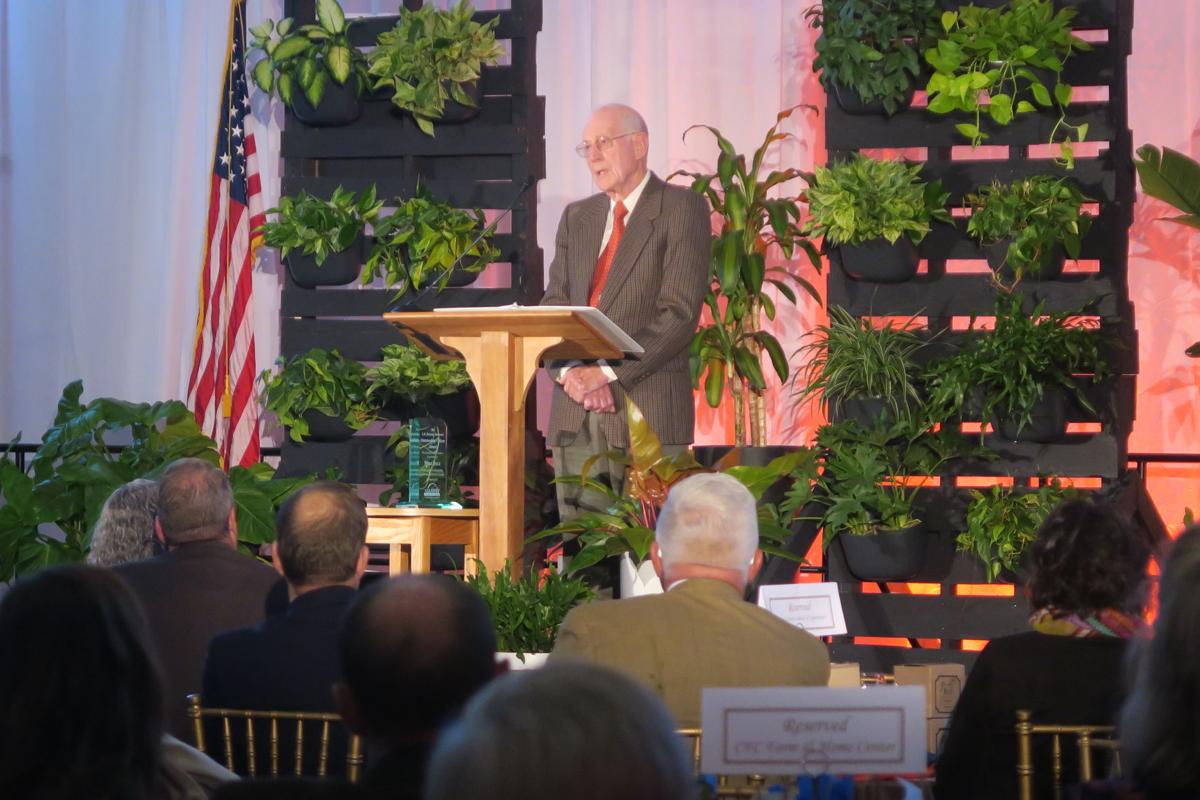 “From an immigrant’s point of view for 50 years … I can tell you this town, this county, it represents America in all its diversity, all its generosity and the energy for which America is known throughout the world,” said the longtime pilot, who was born in England and is the former president of Jaguar Cars North America. “This award is for all the people … This is for the whole team.”

A local pioneer of all things aviation as well as focused investing in youth entrepreneurs, Dale, 86, said retiring here more than 20 years ago was the smartest thing he and wife, Mary, ever did.

“I have traveled half the world and I’ve never been anywhere like Culpeper,” he told a crowd of around 300 at the Nov. 4 gathering at Germanna Community College’s Daniel Technology Center.

Dale was there at the start, with former county administrator Frank Bossio, organizing the first Culpeper AirFest 20 years ago.

The event has grown exponentially since and is internationally recognized. Dale, working with the public schools, also helped get the AirFest’s STEM program off the ground, instructing local youth in science, technology, engineering and math, as is relates to flying.

In addition, the retired luxury-car company president has been involved from the beginning with Career Partners’ E-Squared program, linking young people with bright ideas with local business leaders and mentors through an annual competition that awards scholarships—for the past 14 years.

Dale recounted his amazement at the level of leadership and financial support for the program from Culpeper’s people.

That first year, 70 industry volunteers agreed to work weekly with students to create a business plan and develop products and services for presentation at competition.

“You can say, well that’s typical of Culpeper,” Dale said. “It is. This is why Culpeper is special.”

It describes their friendship and their working relationship, said Richards-Lutz, the chamber’s outgoing board chairwoman, in introducing Dale on Thursday night.

“Without one leg of our stool, we wobble,” she said. “Together, our trio is strong.”

Dale, whose father fought with the British Army during World War II, joined the Royal Air Force in England at age 17 and trained as a pilot. Chronic air sickness grounded the endeavor so he went to work as a mechanic. Dale did a stint as a race-car driver and was inducted into the British Sports Car Hall of Fame in 2017.

“In 2001, the Queen of England appointed him as a commander of the order of the British Empire for his services to British industry,” Richards-Lutz said.

Dale could have retired anywhere in the world, and he chose Culpeper, Gyory said, adding “Aren’t we blessed?”

He is a longtime leader and mentor of the Airport Advisory Committee, he said, well known for his remarkable leadership at the annual AirFest.

“The list goes on,” Gyory said, “And we’ll go on. He’s dedicated to Culpeper—its youth and future.”

The Outstanding Citizen Award is named for the late L.B. Henretty, a local businessman who championed creation of the Mountain Run watershed series of lakes and dams in the 1950s and ‘60s in Culpeper.

John J. “Butch” Davies, a former winner of the L.B. Henretty Outstanding Citizen Award, said in recorded remarks Thursday that Henretty was a down-to-earth, straightforward, hard-working person who did not seek the spotlight.

He secured federal funding to build the lake system that “is the basis for our growth and our community’s prosperity,” Davies said.

The award in his name, Davies said, “recognizes somebody who has given a lifetime of service.”

Nov. 25, 2021: Check out A1 Minute NOW: RTD Thanksgiving special edition; Subscribe to Richmond.com for only 99 cents; Donate to the Richmond Christmas Mother fund

Maintenance workers locked out of DuPont plant in Chesterfield after union negotiations stall; some members of Congress are concerned

About 95 employees of DuPont Co.'s Spruance plant in Chesterfield County have been locked out of work by the company for more than a month after negotiations over a new union contract stalled.

For Culpeper-area residents who see geese as a nuisance, a dog-led service run by an Army veteran will humanely drive the birds away from livi…

By law, county will wait 30 days to see if historical group or museum wants the monument which currently sits on the courthouse lawn.

One of the largest not-for-profit retirement community operators in Virginia, which owns Cedarfield and Hermitage Richmond senior living communities in the Richmond area, is raising minimum wages for its staff to at least $15 an hour and adjusting wages for other employees.

How to find (and survive) a Buy Nothing group

It's never been easier to get involved in the Buy Nothing Project, the giving-and-wishes movement that saw its numbers soar during the pandemic.

Black Friday is rapidly morphing into “Hallothanksmas.” Still, some people like to shop on the day itself. Here are the details on store hours during Black Friday 2021.