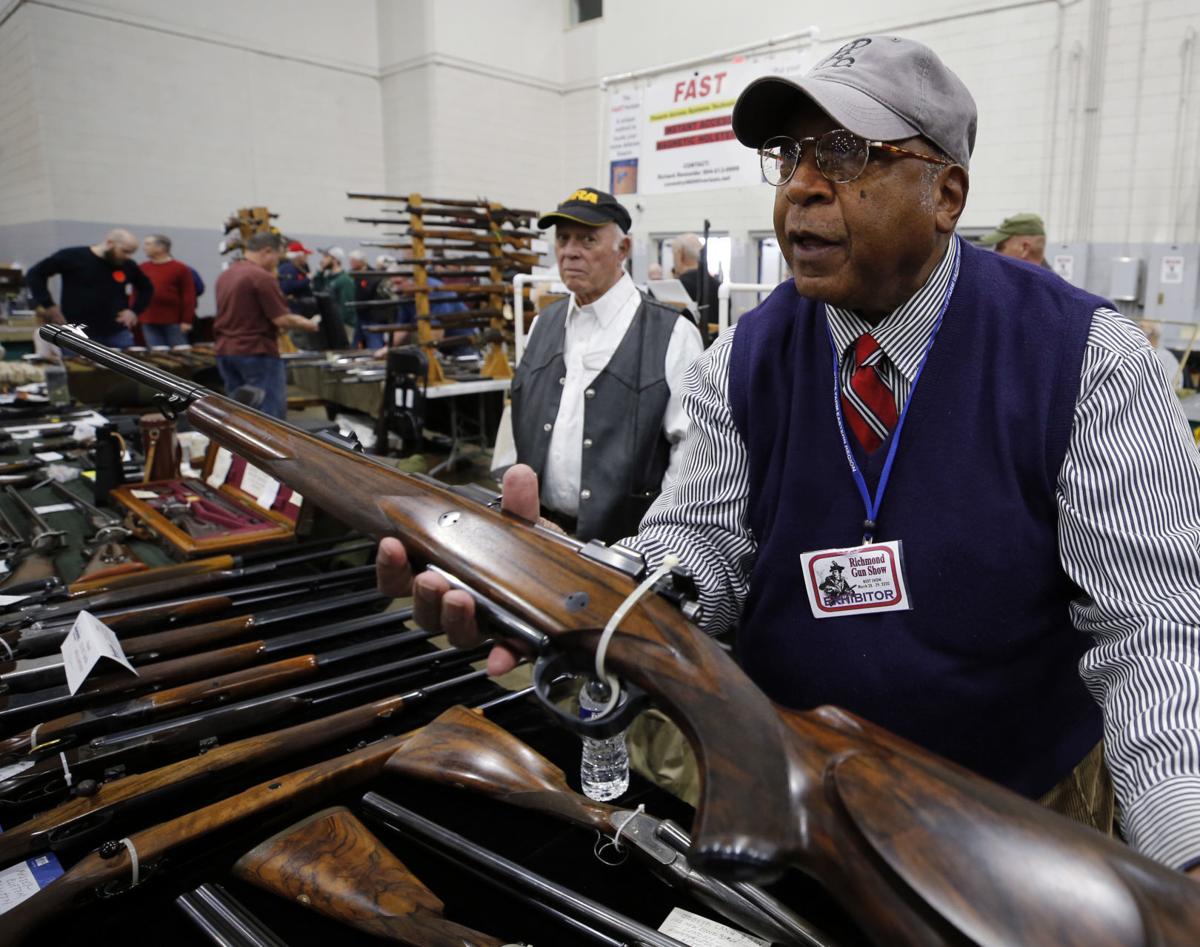 Lawton Durden explained what makes a gun collectible at the show at Richmond Raceway on Saturday. He said, “These are paintings to me,” speaking of the artistry involved in the firearms. Most were European; some were handmade. 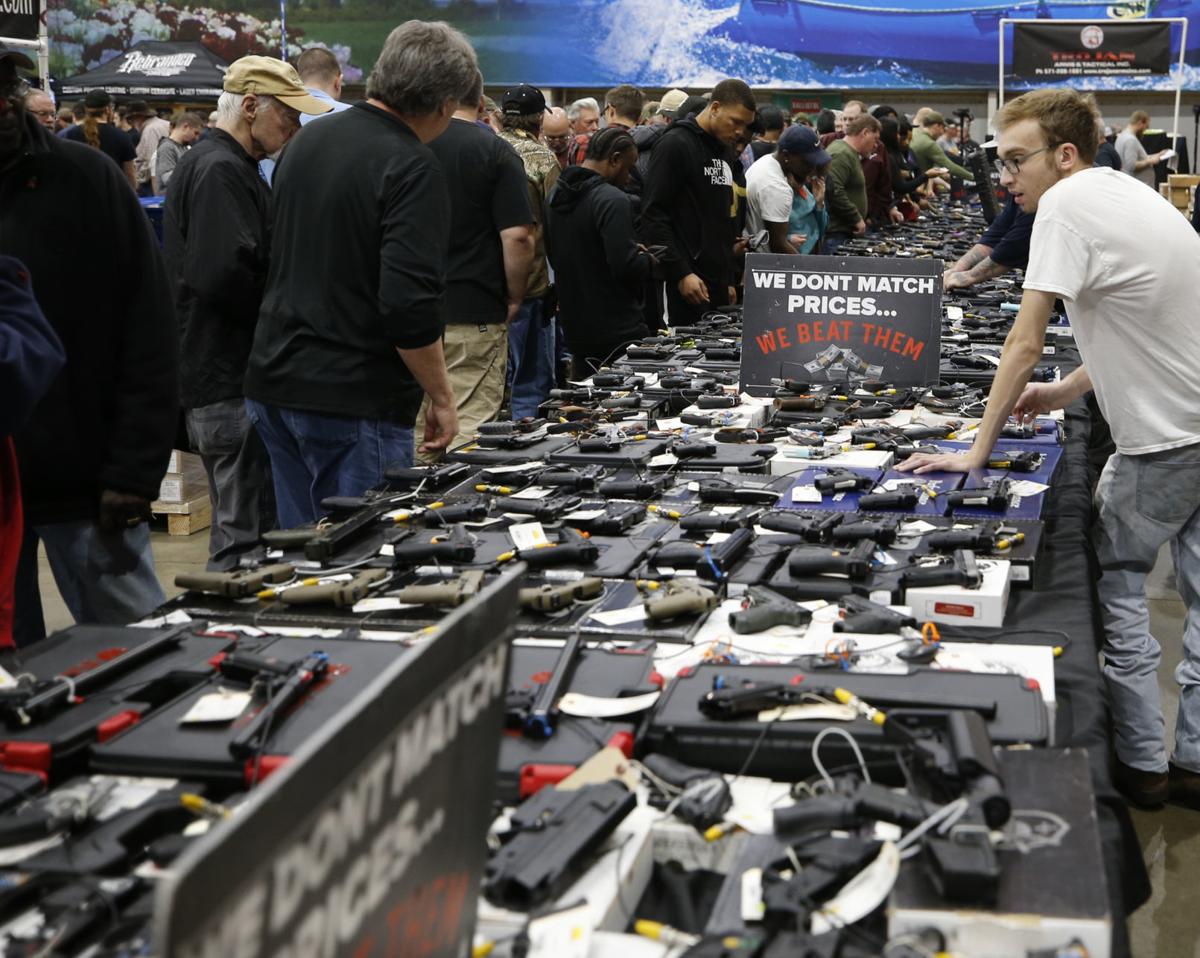 People browsed tables full of handguns on Saturday at Richmond Raceway, where attendance was up. 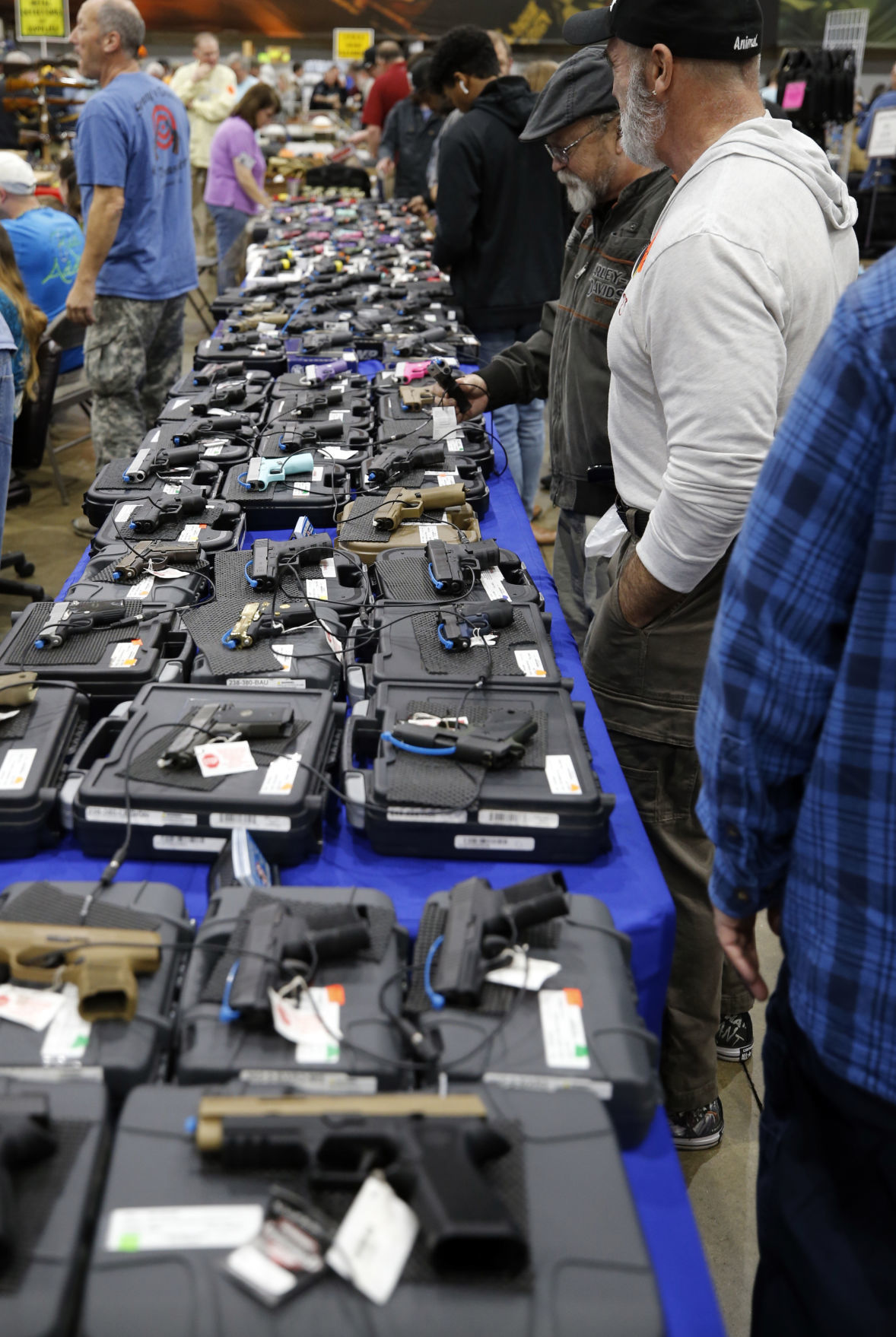 Patrons perused tablesful of pistols, rifles and shotguns at the gun show at Richmond Raceway a year ago.

Virginia gun sales soared in December to the second-highest monthly total on record, fueled by the Democratic takeover of the General Assembly and growing fears of increased firearm restrictions backed by the governor and lawmaker allies, state gun dealers say.

In tracking data that goes back to 1990, the December 2019 tally is second only to December 2012, when 75,120 transactions were recorded. Criminologists say that was triggered by the repeal of the state’s one-handgun-per-month law and fears of increased gun restrictions following the Dec.14, 2012, shooting at Sandy Hook Elementary School that killed 20 students and six adults.

“If Virginians feel threatened that their rights are being curtailed, they’re going to react just the way that you’ve seen,” said Robert Marcus, the principal owner of Bob’s Gun Shop in Norfolk, one of the state’s largest commercial gun dealers. “Everyone down here is upset. I’ve never seen more customers antagonized by a situation.”

Many of the customers are first-time buyers, several Virginia gun dealers said.

“A lot of people that have never owned a gun think they won’t be able to get the style of gun they want [if the proposed restrictions become law], so they’re buying,” said Jerry Cochran, owner of Trader Jerry’s, another of Virginia’s largest federally licensed firearms dealers. “There’s an enormous amount of first-time buyers, especially at the [gun] shows.”

The strong economy is also a factor, Cochran said, along with an increased number of people buying firearms for self defense. “It’s just the biggest perfect storm for gun sales that it’s ever been.”

Total gun sales in Virginia in 2019 rose more modestly, up 8.5%, from 446,333 transactions in 2018 to 484,550 last year, according to the Virginia Firearms Transaction Center operated by Virginia State Police. But the monthly numbers saw no significant movement until November, when Democrats won both the House and the Senate, the data shows.

In December, gun sales averaged 2,382 transactions a day, although that number surpassed 3,000 on five separate days and 4,000 on two other days, including the Saturday before Christmas, state transaction data show.

Customers are grabbing up firearms and accessories they believe will be banned based on legislation proposed by state Democratic lawmakers, gun dealers say.

They include so-called assault weapons, such as AR-15 semiautomatic rifles that gun dealers say are frequently misidentified as assault rifles. Handguns that could fit into the assault weapon category under legislation that has been proposed are also popular sale items, the dealers said, as well as magazines that hold more than 10 rounds.

“It’s definitely been anything that [customers] imagine will be banned or could be banned,” Marcus said. “The bills that I’ve read are in some ways so poorly written that, my God, [if they all pass], the only thing that we’ll have left down here is slingshots.”

Cochran said his sales are trending toward firearms with higher capacity magazines.

“We’re selling a few more AR-15s, some high-capacity handguns, and then of course at the end of the sale, everybody throws on a few extra magazines because they think they will be regulated and they won’t be able to purchase it [in the near future]. “Even the most popular gun is a 12-round, so they’re grabbing those up as well.”

Marlon Dance, owner of Dance’s Sporting Goods in Colonial Heights, another top firearms dealer in the state, said he’s reluctant to describe the recent spike in sales as “panic buying.”

“This has been just a really, really steady flow of people—people that were thinking about getting [a gun] and hadn’t yet got one,” he said. “And when they see what the Governor and his [political allies] want to do, they have stepped up and got it.”

Dance said if state lawmakers are successful in passing every piece of legislation now being proposed, it will put many licensed dealers out of business.

“None of us can take that kind of hit,” Dance said. “That’s not a speed bump. We can take some of it, [like] one handgun a month. But do we think it’s going to do any good? Absolutely not.”

“But if they start saying, you cannot have ARs, you cannot sell guns with magazines over 10 rounds, and so forth, it will put any store out of business that is based [solely] on gun sales,” he added.

In his estimation, Dance said none of the proposed gun restrictions “will do one single thing to take a gun out of a criminal’s hand. I would challenge anybody to tell me that a citizen of the Commonwealth is going to be better protected by anything that these bills have come up with.”

Cochran said the sharp uptick in gun sales has prompted firearm manufacturers to call and “wonder what is happening in Virginia.”

“All the distributors are allocating specific stuff for this part of the country—it’s just different,” he said.

But Cochran said it’s been a “double-edged sword” for some buyers.

“They’re afraid they’re not going to be able to get them [if new gun legislation passes], and then they’re afraid if they get them, they got to give them up,” he said.

Consequently, some customers are trading in firearms they now own that could fall outside new restrictions for “more common” weapons, Cochran said. “It’s about the weirdest time I’ve ever seen.”

Others are taking more drastic measures. Cochran noted that a prominent Virginian he declined to name who lives in the Chesapeake area bought a home in Tennessee last week with sole intention of moving his entire gun collection there.

In addition to retail sales, Tosh’s business doubles as a police supply company, and public safety and military personnel, concerned about the proposed restrictions, bought more guns through a program known as Individual Officer Purchases, which offers price reductions.

“You’re talking about a 35% jump in what we normally do for those IOPs,” he said.

Tosh said one of his customers reminded him that some firearms that wouldn’t appear to fall under the proposed restrictions—like a bolt-action rifle—could be outlawed if the measures are passed. The bolt-action target rifle the customer purchased is equipped with a box-fed magazine that can hold more than 10 rounds.

Tosh suspects that many Virginians are unaware that the restrictions will encompass a wider variety of firearms than it appears. “They’re thinking it’s just ARs or high capacity handguns,” he said. “But this is going to affect a number of different products of guns. Anything that has a box-fed magazine that has the capability of more than ten rounds could be on the endangered species list here in Virginia.”

Tosh added: “You’d be surprised at how many people are first-time buyers that say, before I didn’t feel the need to buy a gun and probably would have never bought one—but I might as well buy now because I feel like the governor is taking away my choice.”

How to decide whether to get a debit or credit card

How to decide whether to get a debit or credit card

Create a steady income for retirement with these easy steps

Create a steady income for retirement with these easy steps

Dominion CEO says company failed to vet secretive anti-Youngkin PAC it donated to, asks for $200,000 back

Dominion Energy's CEO sent an email to company employees Monday morning saying the company's political action committee had failed to properly vet an anti-Glenn Youngkin PAC it gave large donations to, and is asking for its money back.

Virginia Gov. Ralph Northam was on hand Thursday at Cane Creek Centre in Ringgold to celebrate the $300 million, 325,000 square-foot, state-of-the-art manufacturing facility, which is expected to be operational in early 2023.

Nursing homes in Virginia are cracking in the aftermath of a staffing crisis left unaddressed far before they became the epicenter of the state’s most severe coronavirus outbreaks.

Free FAFSA Help: Here’s Where to Get Advice From College Aid Experts

Here are five predictions from retail experts about Black Friday 2021 — plus, how you can navigate the upcoming sales. Also, check out more of the week's best tips from financial experts.

Anthem, UnitedHealthcare, other major insurers are running billions behind in payments to hospitals, doctors

Anthem Blue Cross, the country’s second-biggest health insurance company, is behind on billions of dollars in payments owed to hospitals and doctors because of onerous new reimbursement rules, computer problems and mishandled claims, say hospital officials in Virginia and other states.

Road conditions and other real-time travel information can be found on the 511 Virginia website, the free VDOT 511 mobile app or by calling 511 from any phone in Virginia.

'The cost of taking a job has gone up': Jobless rate declines in Virginia, but labor force participation remains an issue

Virginia’s unemployment rate dropped in September, but the state’s labor force also dipped in an ongoing sign of the difficulties employers have in hiring people.

Q: I live in South Carolina and share a private road with my neighbor. The neighbor owns the first several hundred feet, and then I own a bit …

Inspired by a simple farmhouse in Westmoreland, architectural designer draws plans for the building and shares them with the world.

Lawton Durden explained what makes a gun collectible at the show at Richmond Raceway on Saturday. He said, “These are paintings to me,” speaking of the artistry involved in the firearms. Most were European; some were handmade.

People browsed tables full of handguns on Saturday at Richmond Raceway, where attendance was up.

Patrons perused tablesful of pistols, rifles and shotguns at the gun show at Richmond Raceway a year ago.