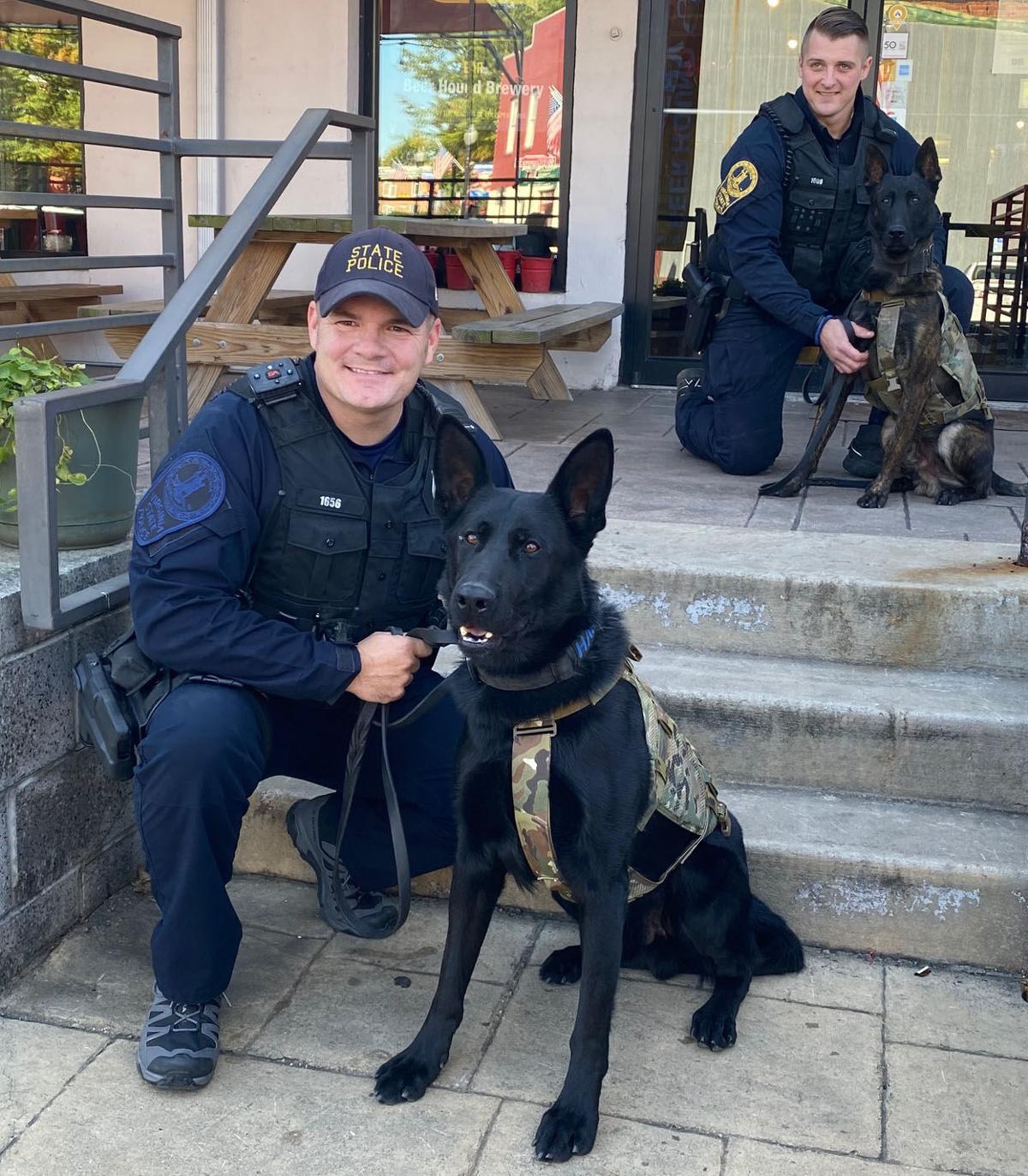 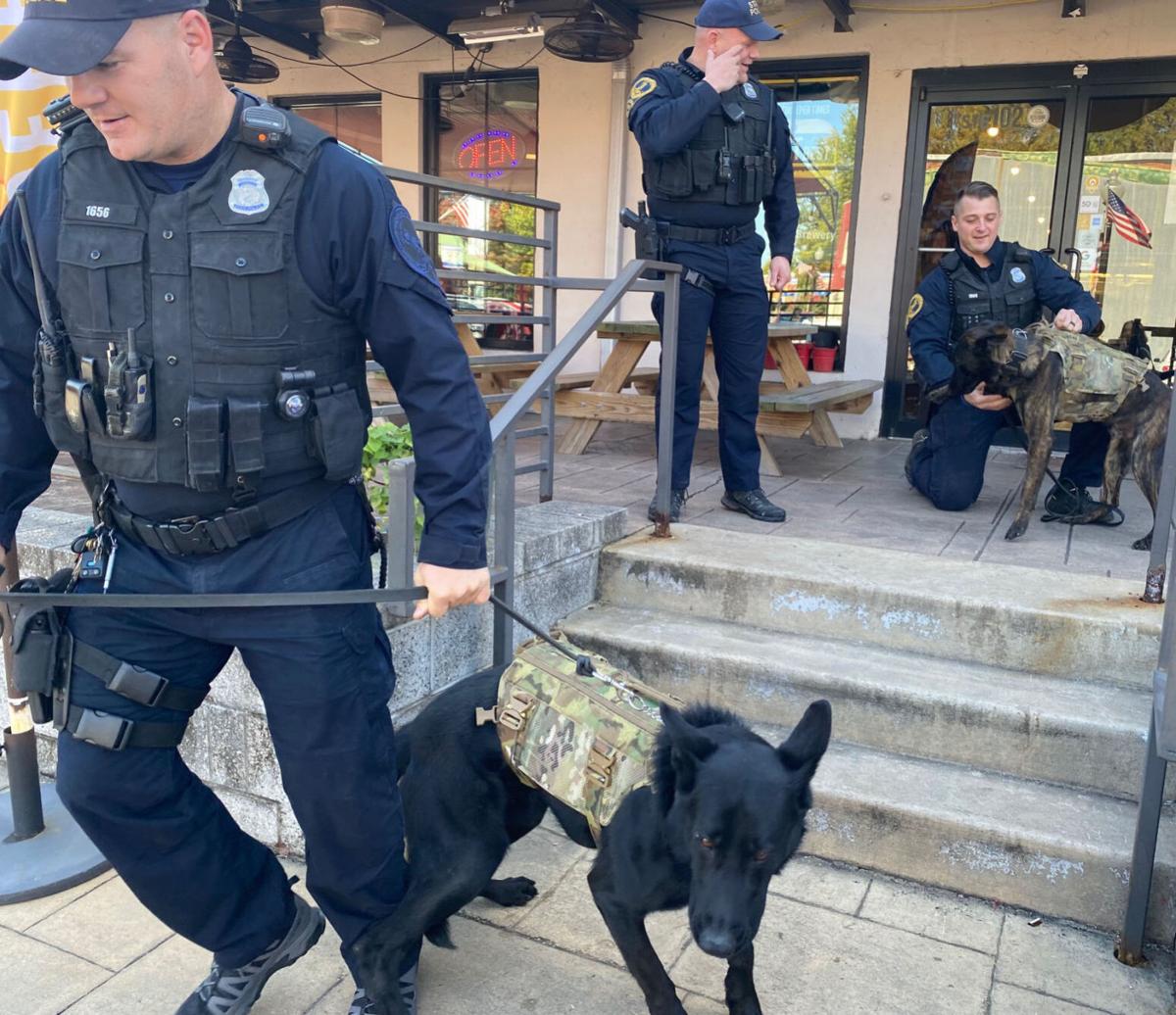 Virginia State Police Culpeper Division Troopers (from left) Eric Todd with K9 Sig, Wade Waybright with K9 Mako and Michael Gremillion with K9 Hawk outside of Beer Hound Brewery by the Depot in Culpeper on Friday for a vest demonstration. 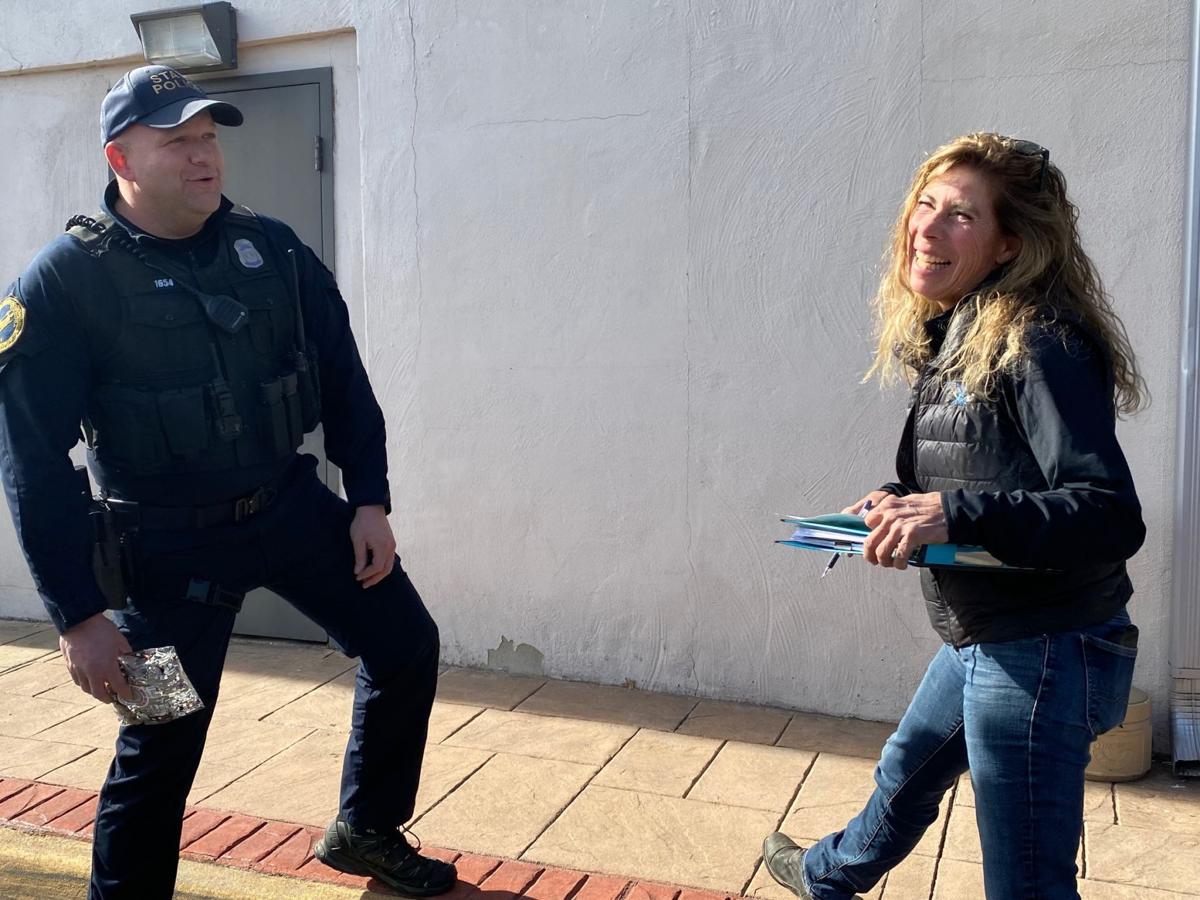 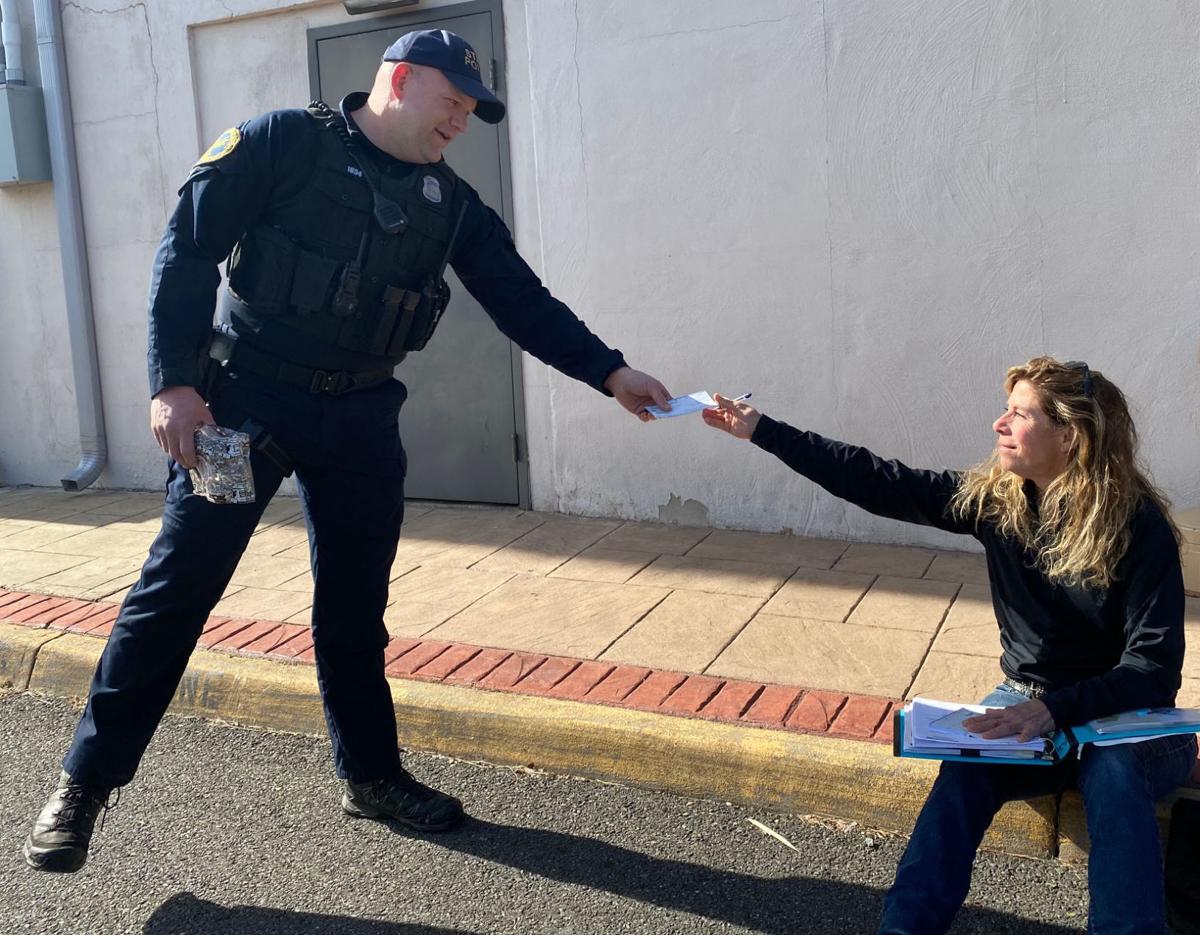 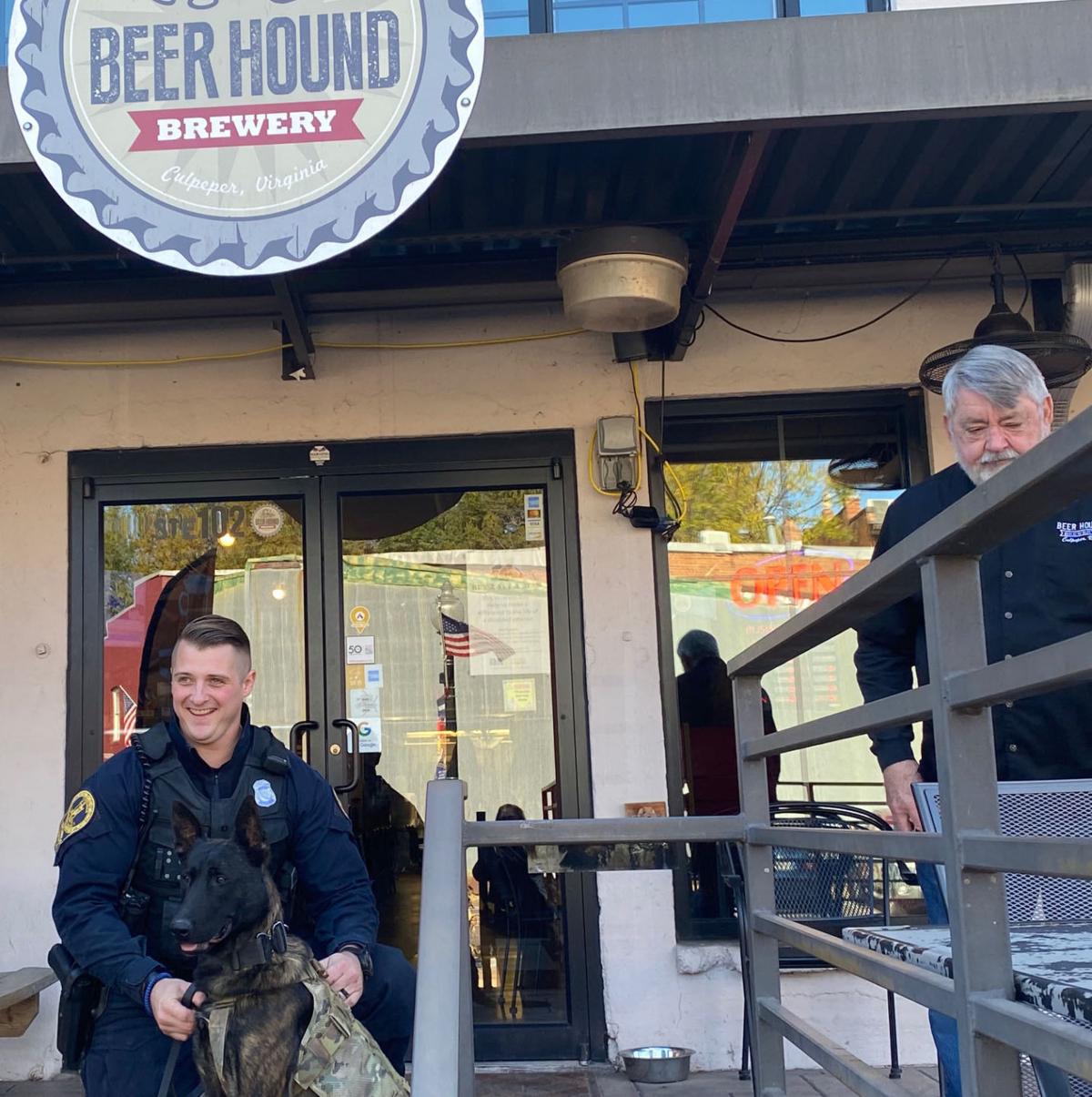 Trained to sniff drugs and explosives, to locate missing people and crime suspects and to work the streets or battlefields alongside law enforcement and military, highly-trained K9s need all the protection they can get.

It was in this spirit that more than $8,000 was recently donated to Culpeper County and Virginia State Police K9 teams for the purchase of bulletproof ballistics vests custom-made to fit the fierce working dogs, among them Belgian Malinois and Dutch Shepherds, often working in dangerous environments.

The local donation drive started this past spring at downtown Culpeper’s dog-themed Beer Hound Brewery. It’s since spread to a Purcellville horse veterinarian who traveled Friday to the brewery adding to the puppy love. The effort was born in memory of narcotics K9 Vader, fatally shot in pursuit of a drug suspect and not wearing a vest. Now, 11 local police dogs will have that protection.

VSP Culpeper Division Troopers Wade Waybright, with K9 Mako, Michael Gremillion, with K9 Hawk, and Eric Todd, with K9 Sig, came to Beer Hound Friday to show the new vests outfitted by Velocity Systems of Dulles. The firm was founded in 2007 to provide high-performing armor solutions in the shortest amount of time to U.S. Military Special Ops and law enforcement, according to the company web site.

The local officer dogs wore them well, and were very active, on alert, sniffing, stopping, starting and moving as their handlers attempted to arrange photo ops.

K9 officers from the Culpeper County Sheriff’s Office also received vests, but could not make it Friday as they had responded to a bomb threat call at a local school, said Lt. Les Tyler, CCSO spokesman, formerly with VSP.

“Goes to show how in demand K9 units are,” he said.

Waybright coordinated ordering the vests in May, costing around $800/each. Velocity Systems have been great partners, he said.

“Everybody’s really pleased with it,” Waybright said. “It’s extremely important for everything we do in a day-to-day capacity for ballistic protection.”

The vests can also be used as a tracking harness and can provide internal protection for K9s involved in vehicle crashes, he said.

Like everything, there’s a priority order for which working dogs get available funding to purchase the vests starting with patrol K9s, top of the list.

“They usually have vests. Detectors, drug/bomb dogs don’t,” Waybright said. “They do dangerous things as well—we’re trying to get them a vest.”

It’s not always in the budget, however. VSP Culpeper Division also has three bloodhounds for tracking missing people and helping in other investigations.

Trooper Gremillion works patrol with his Belgian/Shepherd mix. He’s been a trooper for 16 years, including 11 years with a K9.

“It gives us more security…for my dog, it’s nice having that immediate, quick back-up,” Gremillion said.

Trooper Ward recently got his Dutch Shepherd K9 imported from Poland. The dog is one of the first not trained to detect marijuana as an illegal drug, since legalization last summer.

Sig has been wearing the K9 vest for about a month for when on the job detecting heroin, ecstasy, cocaine and methamphetamine, the narcotics to which it was trained to alert.

“It feels good to have,” said Todd. “It’s a great thing for us—just the people that care.”

At work, the K9s are rewarded with toys and a round of play with their handlers for finding drugs or otherwise doing their jobs.

Todd demonstrated this during a drug search demonstration using “pseudo,” a simulated substance that mimics the smell of real narcotics. Sig located the substance within seconds, promptly sitting down on the pavement followed by a burst of play.

Sitting is the final response to drug detection, said Todd, prefaced with some sort of an “alert” by the K9, a change in behavior such as how they breath or open and close their mouth.

When not at work, the dogs live with the officers and their families. Sig gets along with his family’s other dogs, too—a retired K9 and two pets, Todd said: “Run up and down the yard, expel a lot of energy and lay down.”

“We all troopers…they do some extraordinary things, courageous, dedication to training requirements,” he said.

“That’s their best friend,” Figgers said of the K9 duos. “It creates a bond that extends to the handler and their families.”

Dr. Nancy Voytosh, veterinarian, appreciates that bond between human and dog on a personal level. So in 2013 she created The Xerox Voytosh Armor Fund in memory of her own working companion, a Rottweiler named Xerox who covered thousands of miles and hundreds of emergencies by her side.

The nonprofit started to collect donations to purchase bulletproof vests for military K9s, to honor Voytosh’s dad, who was a Marine, she said Friday, showing up for the K9 gathering in Culpeper. She heard about the local troopers raising money for K9 vests for police dogs and wanted to add to it.

The protection is vital, Voytosh said.

Beer Hound Brewery regular Bobby Ovalle, with wife Audra, of Fauquier, had heard about Vader, too and suggested naming a new beer after him in the dog-loving establishment.

They knew Figgers was a state trooper and felt it would be good way to honor the fallen K9.

“It is still on tap and it has been a very popular selection,” he said.

Nov. 25, 2021: Check out A1 Minute NOW: RTD Thanksgiving special edition; Subscribe to Richmond.com for only 99 cents; Donate to the Richmond Christmas Mother fund

Maintenance workers locked out of DuPont plant in Chesterfield after union negotiations stall; some members of Congress are concerned

About 95 employees of DuPont Co.'s Spruance plant in Chesterfield County have been locked out of work by the company for more than a month after negotiations over a new union contract stalled.

For Culpeper-area residents who see geese as a nuisance, a dog-led service run by an Army veteran will humanely drive the birds away from livi…

By law, county will wait 30 days to see if historical group or museum wants the monument which currently sits on the courthouse lawn.

One of the largest not-for-profit retirement community operators in Virginia, which owns Cedarfield and Hermitage Richmond senior living communities in the Richmond area, is raising minimum wages for its staff to at least $15 an hour and adjusting wages for other employees.

How to find (and survive) a Buy Nothing group

It's never been easier to get involved in the Buy Nothing Project, the giving-and-wishes movement that saw its numbers soar during the pandemic.

Black Friday is rapidly morphing into “Hallothanksmas.” Still, some people like to shop on the day itself. Here are the details on store hours during Black Friday 2021.

Virginia State Police Culpeper Division Troopers (from left) Eric Todd with K9 Sig, Wade Waybright with K9 Mako and Michael Gremillion with K9 Hawk outside of Beer Hound Brewery by the Depot in Culpeper on Friday for a vest demonstration.