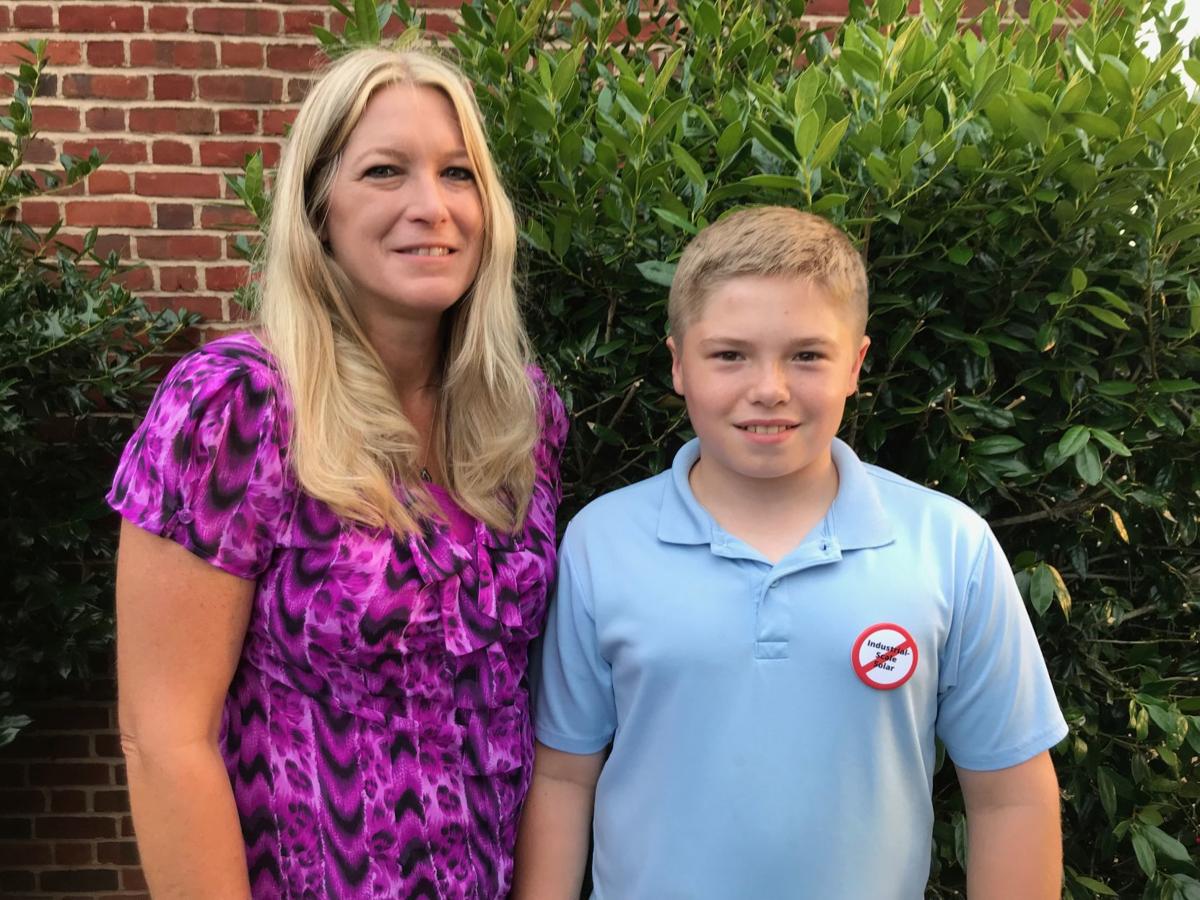 Farm family members Stephanie Emmel and her son, Dylan, stand outside the Culpeper County Administration Building after Dylan testified Tuesday to the Board of Supervisors on the proposed Cricket Solar plant. 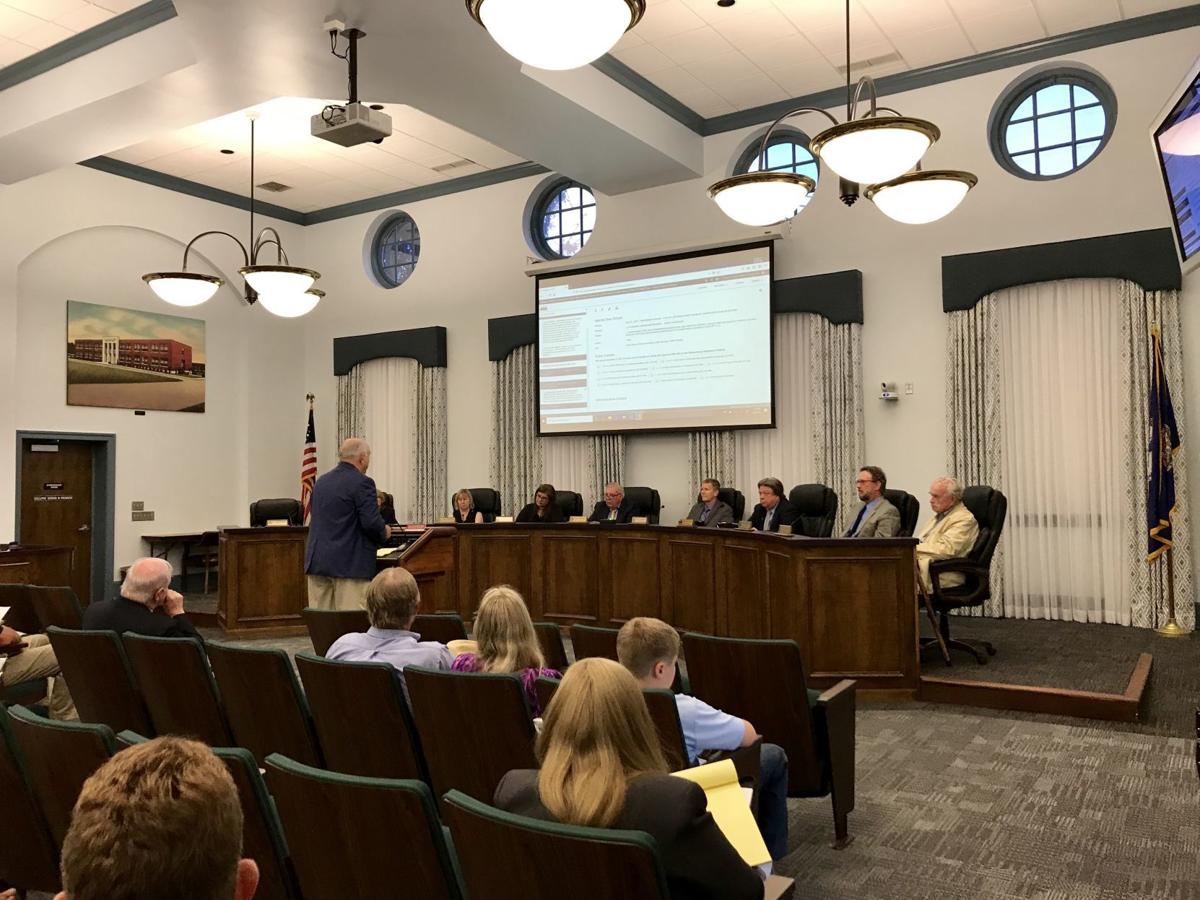 Mike Baudhuin, owner of the circa-1820 Summerduck plantation home along Algonquin Trail in Culpeper’s Raccoon Ford area, addresses the Board of Supervisors on Tuesday evening. 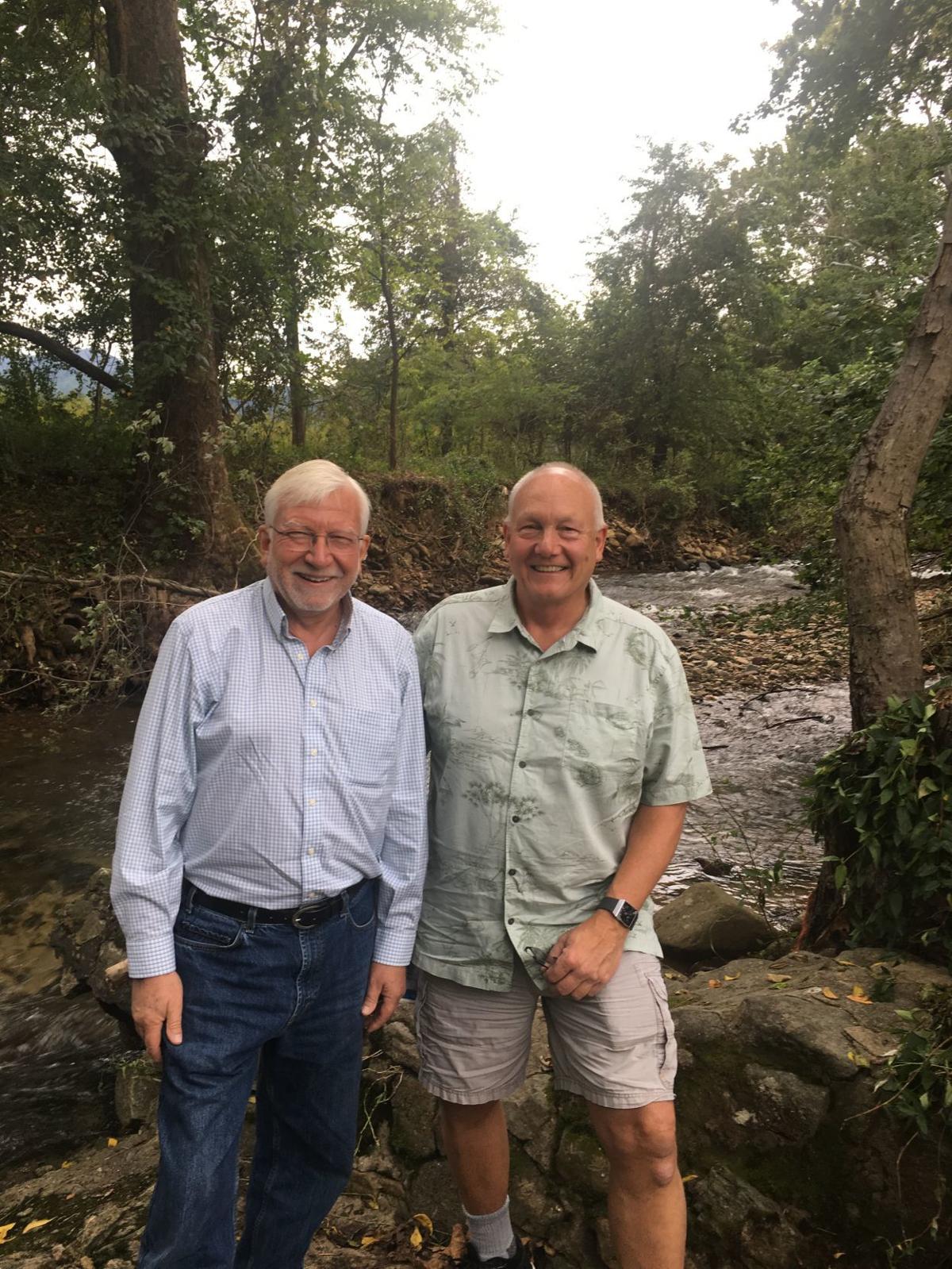 When Culpeper’s supervisors convened Tuesday evening, their meeting brought a glimpse of public discourse to come on issues raised by the utility-scale solar power plants proposed in the county.

During public comment time, nine people rose to speak against and for the 1,800-acre facility planned by Cricket Solar LLC of Irvine, Calif., along the Rapidan River in southeastern Culpeper.

They ranged widely in viewpoint and years, from elementary-school to retirement age. Seven urged the board to reject Cricket’s request for a permit to build its electrical generating facility, and two—including Cricket’s Virginia attorney—spoke in its favor.

Perhaps the most interesting comments came from Dylan Emmel, 11, of the county’s Cedar Mountain District and Mike Baudhuin, 86, owner of Sumerduck, a circa-1820 home designed and built by one of Culpeper’s most prominent antebellum residents, Jeremiah Morton.

They were countered by remarks by Ann Neal Crosby, Cricket’s Richmond lawyer, and Mike Murphy, a solar-energy advocate who lives in the Boston area of northwestern Culpeper.

He asked them to please vote “no” on the industrial-scale solar project, saying it would harm the battlefields of Mortons Ford and Racoon Ford, and negatively impact several pre-Civil War plantation homes near Raccoon Ford.

“This solar-panel project should be rejected to save our agricultural land, sacred battlefields and historic sites,” Dylan said. “... We are fighting for our homes and historic places.”

Four generations of Emmel’s family live at St. Omer’s Farm on the Rapidan. And his family is kin with Culpeper’s Stringfellow family, who owned much of the land proposed for the power plant, he said.

Baudhuin urged the board to protect the investments that people, including the state and federal governments, have made over decades to preserve “this very historic area.” Years ago, he was encouraged by state authorities to place Summerduck—which would be encompassed by Cricket Solar’s power plant—in a conservation easement, and he did so.

Two of the nation’s most important military campaigns—Yorktown and Gettysburg—began there, Baudhuin noted. The first was when Revolutionary War forces led by the Marquis de Lafayette and Gen. “Mad” Anthony Wayne linked up. The second came in June 1863 when Confederate and Union cavalry clashed near the Rapidan.

“Our independence was guaranteed by that,” he said of Yorktown. “[And] if Gettysburg had turned the other way, we’d be living in two nations rather than one.

“The history here is profound,” Baudhuin said. “But companies from California don’t care about our history and open space. They’re here for here for tax credits.”

Baudhuin also reminded the board of Culpeper’s failed State Theater venture, which was encouraged by tax credits.

Ann Neil Crosby of McGuireWoods, an influential Richmond law firm, noted that she is a lifelong Virginian who was raised in Albemarle.

Cricket is acting in response to Culpeper’s policy on large-scale solar energy plants, and will provide as much information as it can to the Planning Commission and Board of Supervisors, she said.

“We are keenly aware that whether this project is suitable to this particular site will be determined by this board,” Crosby said.

The attorney said Cricket, which is a subsidiary of BayWa, a German energy company, doesn’t intend to try and prove its critics wrong.

“We will continue to listen to commissioners’ and citizens’ concerns,” Crosby said.

On Friday, the limited liability corporation will file the latest site plan for the Raccoon Ford project—its third—with the county, she said.

Culpeper renewable-energy advocate Mike Murphy, who lives in the Boston area and drives an electric car powered by solar energy, asked the board to “position Culpeper County as a leader in the future of energy.”

“... [O]ne could argue that the approval of this solar ‘farm’ will be a reflection not only of your leadership, but your legacy,” he told the supervisors. “Culpeper County is well positioned to foster growth and development in job creation, energy resilience, and energy freedom. I’m convinced that the power and potential of solar is here to stay.”

Susan and Troy Ralston, two of the leaders of Culpeper’s Citizens for Responsible Solar group, said residents are looking to the board for leadership.

“Please listen to what your constituents are saying,” Susan Ralston said. “Outside developers don’t have our county’s best interests at heart. They’re going to make promises they can’t keep.”

The citizens group has gathered nearly 1,500 signatures of residents who oppose Cricket’s proposal and all industrial-scale solar power plants on agricultural land, she said.

A nationally known pollster hired by the group surveyed residents and found that a majority of them in southern Culpeper, including Cedar Mountain and Stevensburg districts, oppose the solar projects by a margin of 57 percent to 35 percent. Opposition is highest in the Stevensburg District, where Cricket’s plant would be built.

Virginia historian Clark B. Hall, who lives in Culpeper, emphasized the historical significance of the Raccoon Ford area.

Clark said that what he called the “central Rapidan front” formed a large and important part of Culpeper County’s heritage, during the Civil War and going back to Native American times.

“It is not some backwater swamp,” he said of the vicinity, asking the board to consider that history in its deliberations later on as it is shared with them.

Signature Theatre is blazing back with “Simply Sondheim,” which is guaranteed to fill the heart of any musical lover who’s been longing for live entertainment.

A widely held belief includes the idea that the past was a land of gentility, whereas today we hold the monopoly on rudeness. But sometimes, a…

Farm family members Stephanie Emmel and her son, Dylan, stand outside the Culpeper County Administration Building after Dylan testified Tuesday to the Board of Supervisors on the proposed Cricket Solar plant.

Mike Baudhuin, owner of the circa-1820 Summerduck plantation home along Algonquin Trail in Culpeper’s Raccoon Ford area, addresses the Board of Supervisors on Tuesday evening.