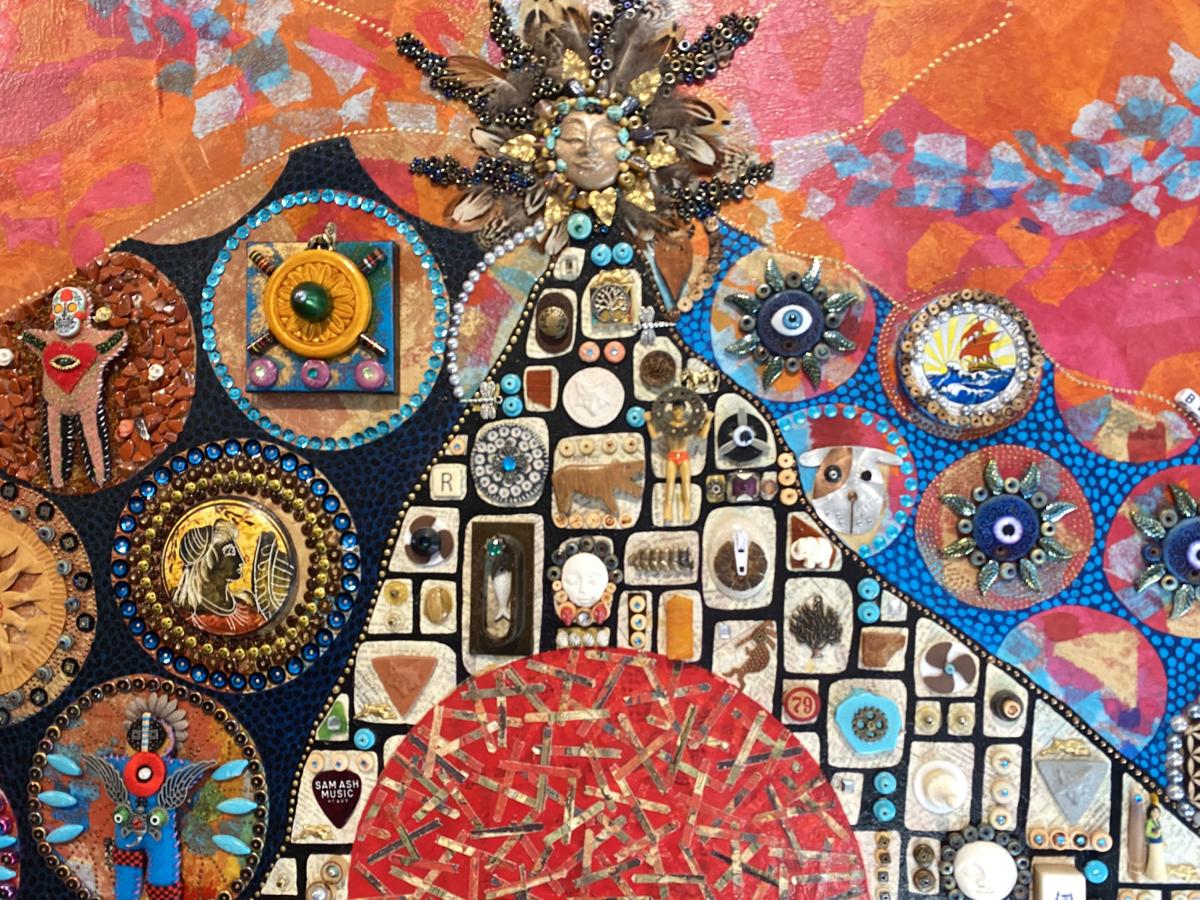 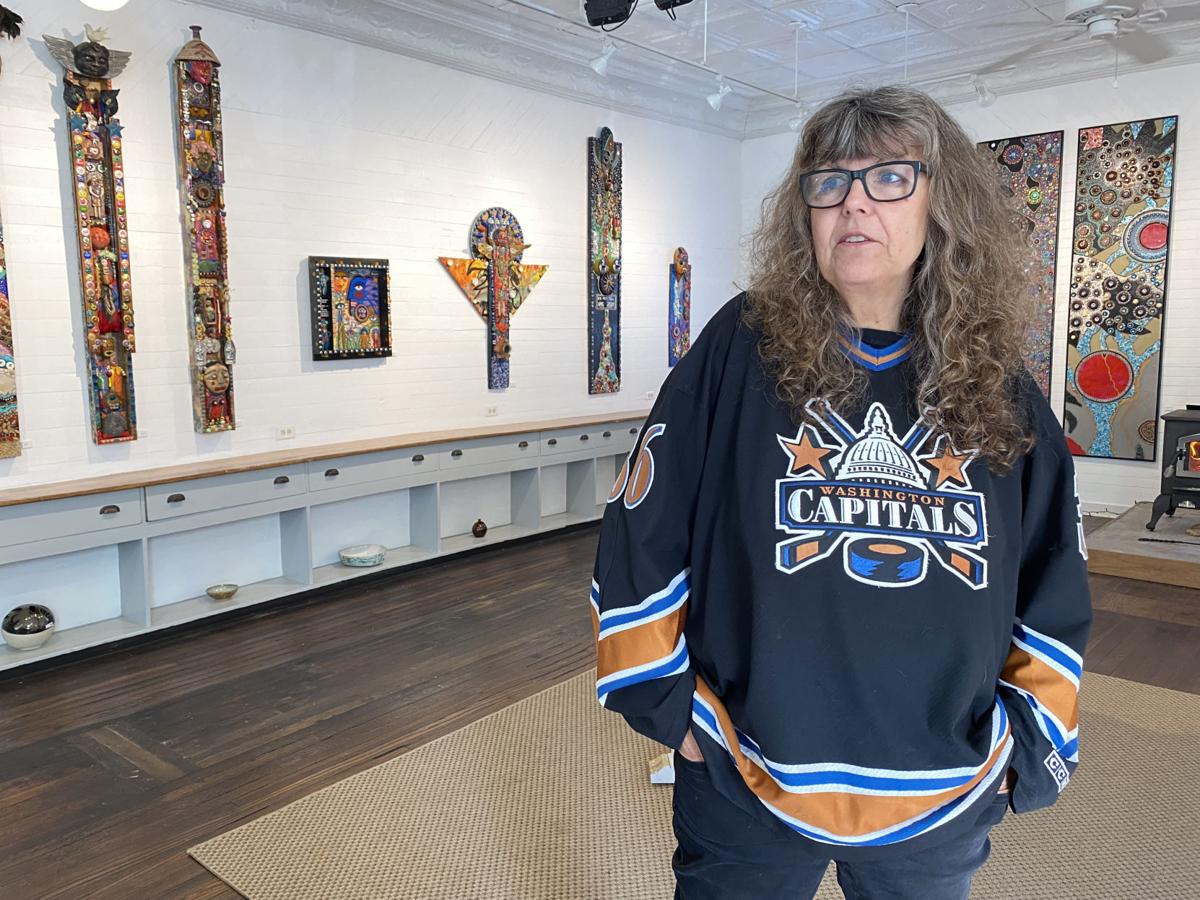 The artwork of local resident Sharon Zarambo is now on display at Possum’s Store in Criglersville. 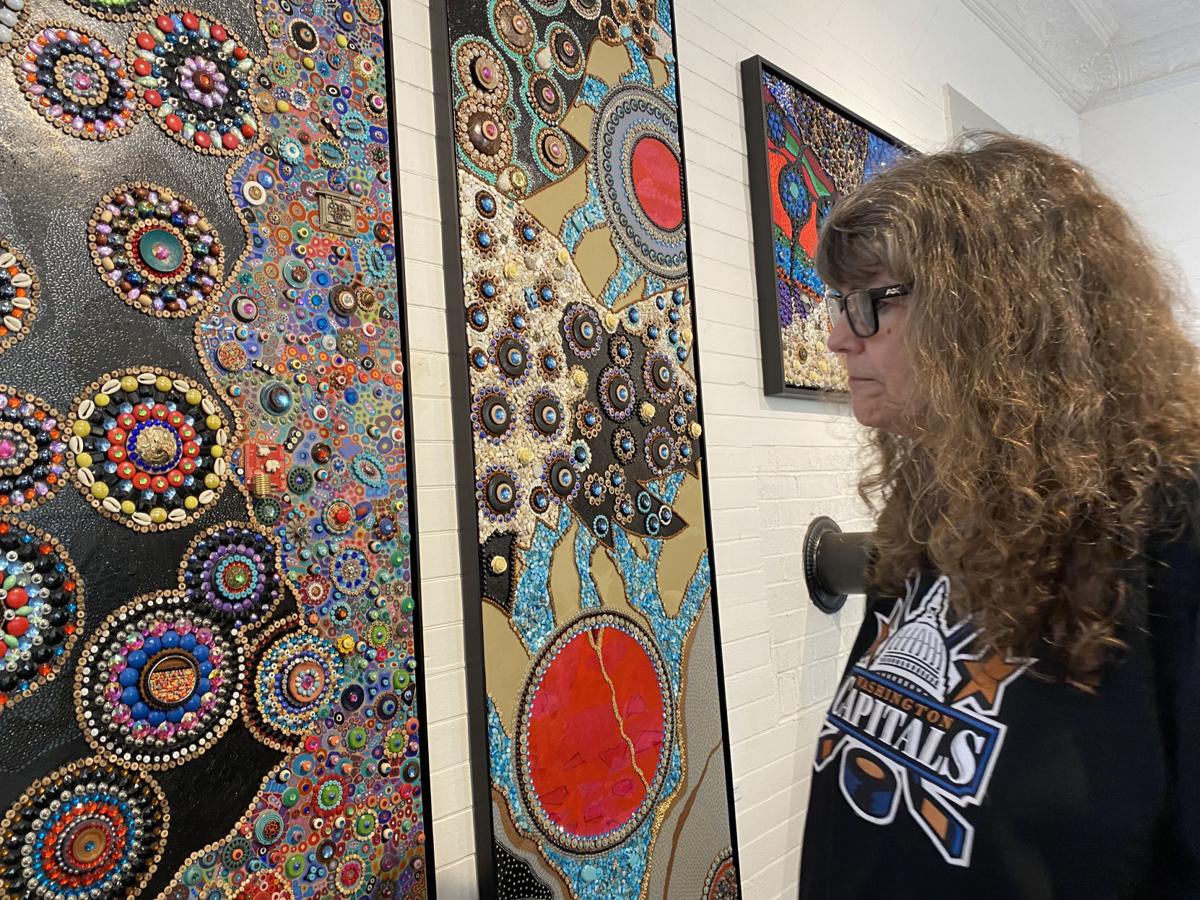 Etlan mixed-media artist Sharon Zarambo talks about her artistic process at an exhibit of her work at Possum’s Store. 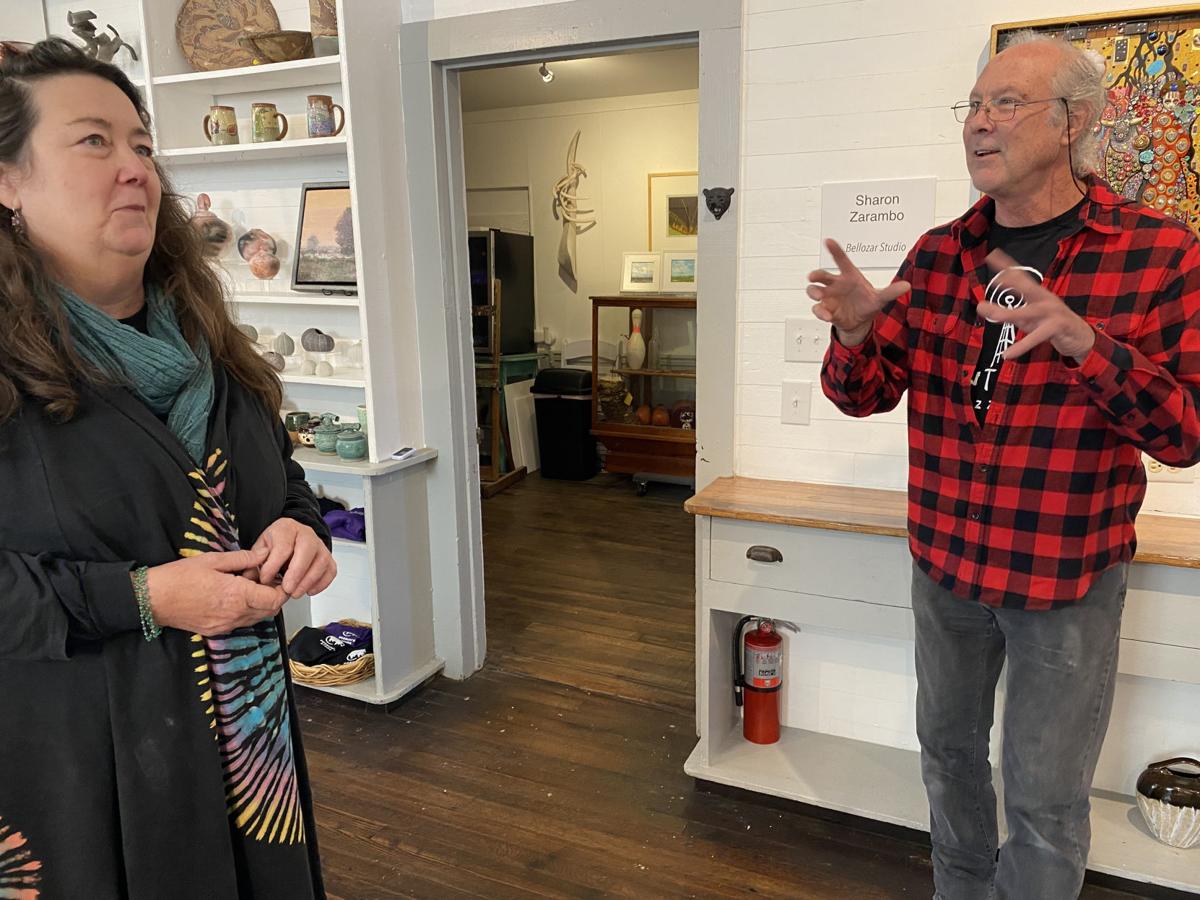 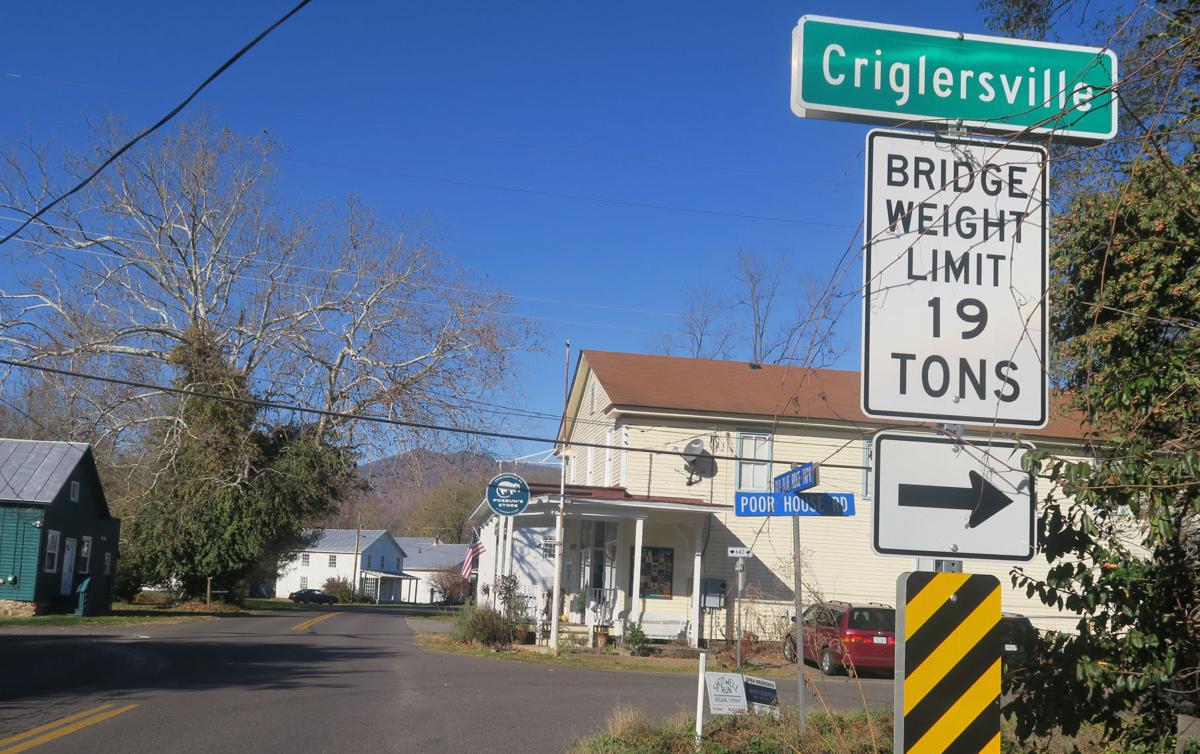 Possum’s Store (right) is an arts and artisan gallery along Old Blue Ridge Turnpike in Criglersville. 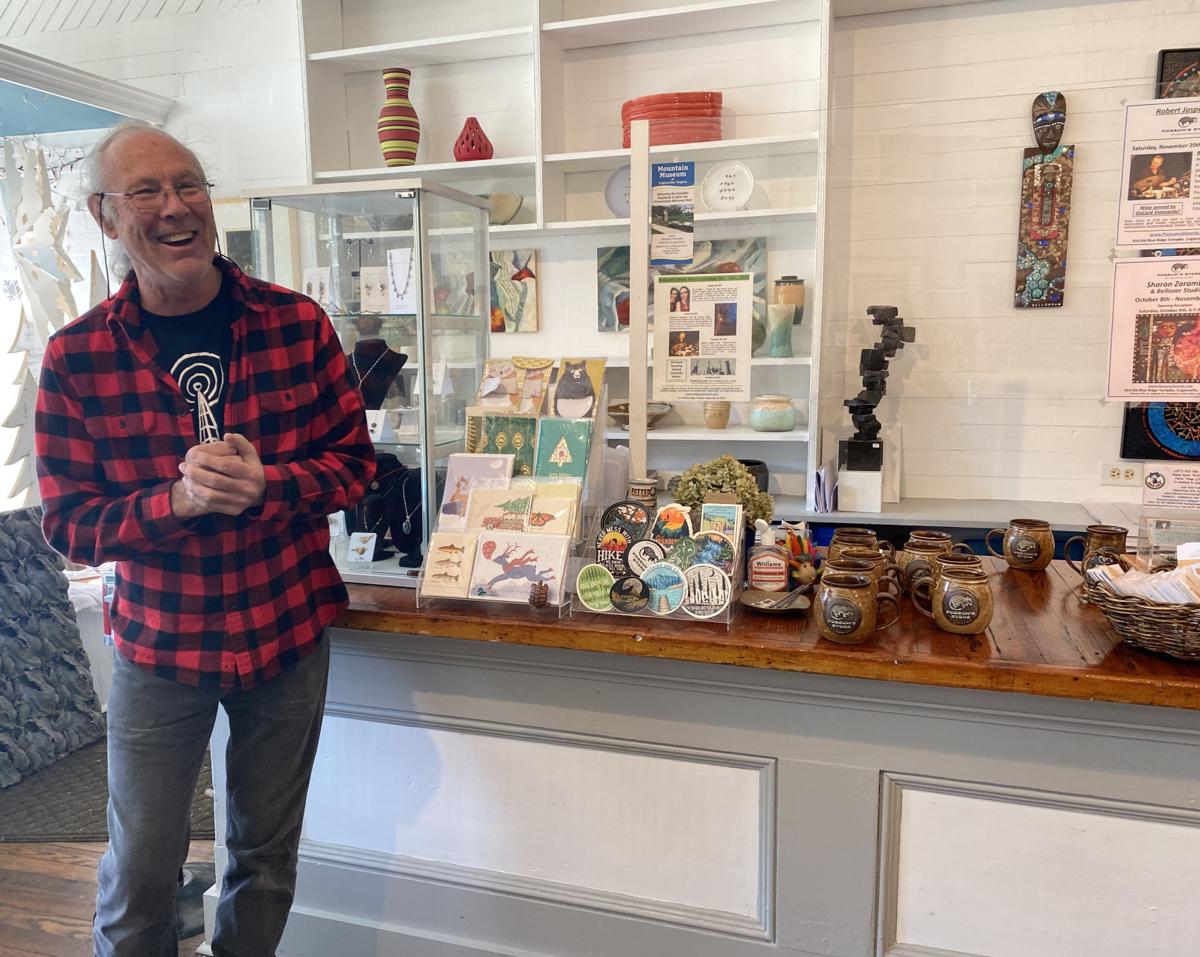 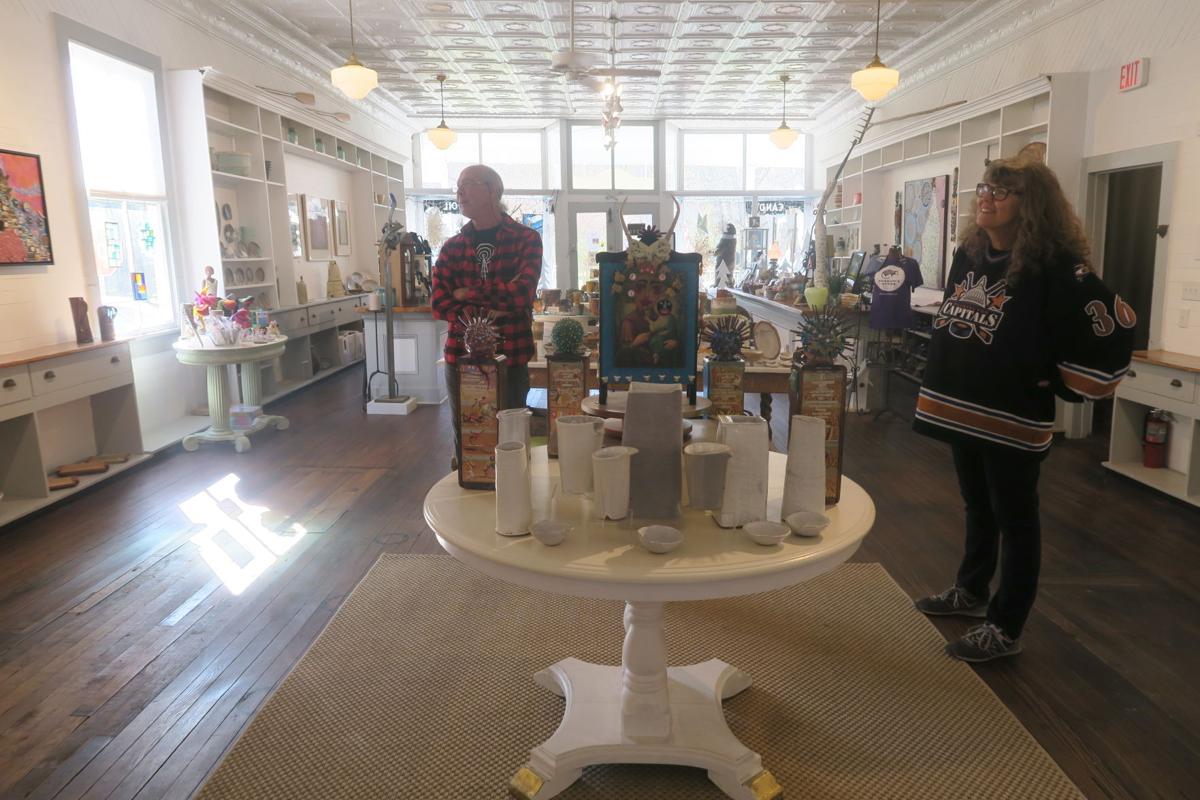 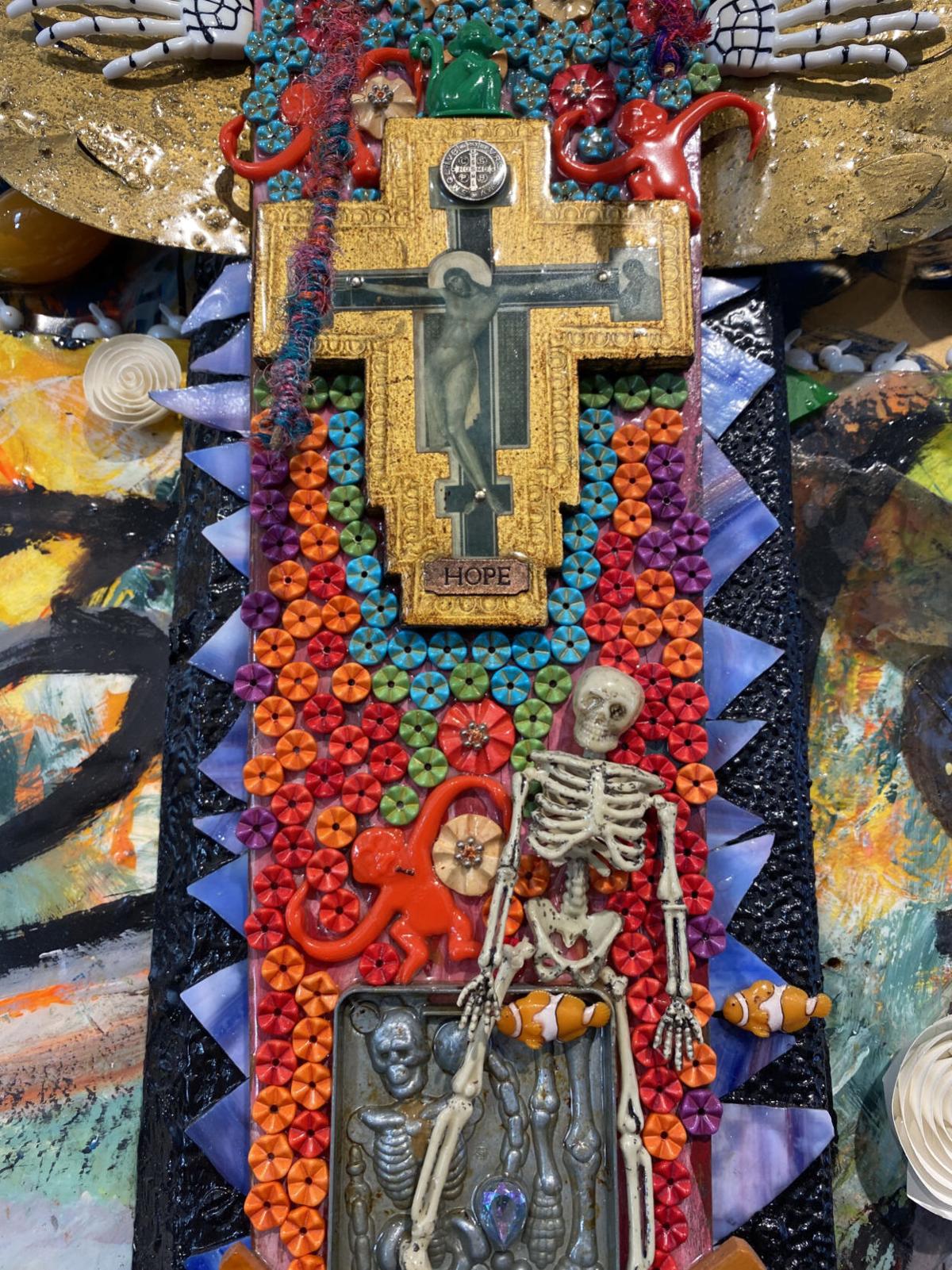 CRIGLERSVILLE—Mixed-media artist Sharon Zarambo, like people everywhere, experienced a lot of loss in the past year.

“Seven people died, including my mom, and my dog,” said the 66-year-old, who grew up on Long Island and has lived in rural Etlan in Madison County for 23 years.

Amid the sorrow, Zarambo funneled her energy into the “tedious work” involved in making the complex, layered art she creates.

“Keeps your mind occupied,” she said. “That’s why I do repetition and beads. It’s great, and the endorphins kick in—like finding a piece to a puzzle.”

Art was a salvation in the darkness of death. The outcome of her efforts is glorious and cheerful.

A middle-school art teacher in Houston for 10 years, Zarambo for the past decade or so has created detailed 3-D pieces that recall mosaics with a Gustav Klimt flair.

Now, she has an exhibit on display at Possum’s Store Arts & Artisan Gallery in Criglersville, and it something to behold. The creations are large and captivating, with vast perspectives and details to discover.

Her show can be viewed Fridays to Sundays through the end of December at the historic general store along Old Blue Ridge Turnpike. See possumstoreva.com for the times.

Zarambo produced the art while caring for her elderly parents amid COVID quarantine. She worked on each piece with a particular person in mind, but all of the works are untitled. She’s not on the internet, but intends to get on the web next year when she can find the time.

Deliberate patterns and distinctive designs emerge upon viewing her work, which is comprised of thousands of tiny pieces of materials that make a bigger picture.

Beads, shells, buttons and jewels. Bottle caps, doll parts, license plates and crosses. All are some of the stuff Zaramabo uses to make her art.

“It’s not haphazard,” she said. “I hope you can see the design elements I put into them. And I am always learning. Whatever is working becomes part of the next piece—that’s why you see repetition of materials.”

The art evokes aboriginal culture as well as India and American Indians. Resin and other glue mixtures hold it all together, affixed to canvas or discarded doors and oversized shipping boxes. All colors of the rainbow are represented. Some of the larger pieces take several months to complete.

“I’m not a black-and-white person—texture and color, they make me happy,” Zarambo said. “For the most part, I think it has an upbeat joy. That’s my intention. It’s not about being on the dark side.”

Though she attended art school and holds degrees, the artist is self-taught in mixed media. It sustains her.

“I can’t imagine not doing art even if it’s being shown,” Zarambo said. “If no one sees it, I still have to do it.”

Possum’s Store co-owner Renee Balfour, of Charlottesville, said the gallery’s vision is to show contemporary work such as Zarambo’s.

“Sharon lives up the road, so it’s very wonderful to have her here—we love her work,” she said.

Balfour and husband, Jim Howe, purchased the circa-1890 McAllister’s General Store in late 2019 “on a fluke,” she said, at the onset of COVID. They’ve been working to renovate the place since, and have hosted various art shows and musical performances in the storied space, which retains most of its original architectural features.

“We want to expand, to make it more of a center for arts and music, keep it active and vibrant,” Balfour said.

The old general store retains much history, which they want to preserve and honor, she noted. Dozens of community members used to gather in the store during World War II to listen to CBS broadcaster Edward R. Murrow on the radio. And President Herbert Hoover frequently stopped there on his way to his Rapidan River fishing camp.

“The idea is to create a place where the community wants to gather for art and music,” Balfour said.

She is a painter and sculptor that teaches art in Charlottesville. Balfour has a woodworking shop upstairs in the old general store where she makes her sculptures and a spring exhibit scheduled for a D.C. gallery.

She and Howe are installing an apartment upstairs for when they retire. He is a materials-science professor at the University of Virginia and a leader in the field, focused on the study of electrons. Howe plays drums on the side, something he took up as a youngster.

“People walk into our gallery, and it’s not what they expect,” Balfour said. “I am OK with that. We are staying true to our vision and respecting the history of the store. She is a hidden treasure here in Madison County.”

Howe grew up in Kentucky and moved to California as a young man to try and make it as a musician. He found science instead, got an engineering degree and gave up music for 25 years.

Now, at the drums again, Howe is excited about the next chapter at the former McAllister’s General Store. He’s in charge of recruiting the jazz acts they have hosted. He, too, respects the history of the building.

“Curtis Gibbs owned it for over 60 years,” Howe said. “Worked as a kid at McAllister’s and later bought it.”

He pointed out perfectly-round indentations in the old wood floor.

“That there speaks to the history of the store—stool imprints where men would play cards at the counter,” he said.

Zarambo is thrilled to show her art in the vintage space with high ceilings and great light.

“To do what I do, it’s my calling,” she said. “To have somebody actually like it, it’s few and far between.”

'Meet Me in St. Louis' arrives at Riverside Center

You’ve seen the Judy Garland classic on the big screen. And now, you can experience the magic locally onstage.

The artwork of local resident Sharon Zarambo is now on display at Possum’s Store in Criglersville.

Etlan mixed-media artist Sharon Zarambo talks about her artistic process at an exhibit of her work at Possum’s Store.

Possum’s Store (right) is an arts and artisan gallery along Old Blue Ridge Turnpike in Criglersville.