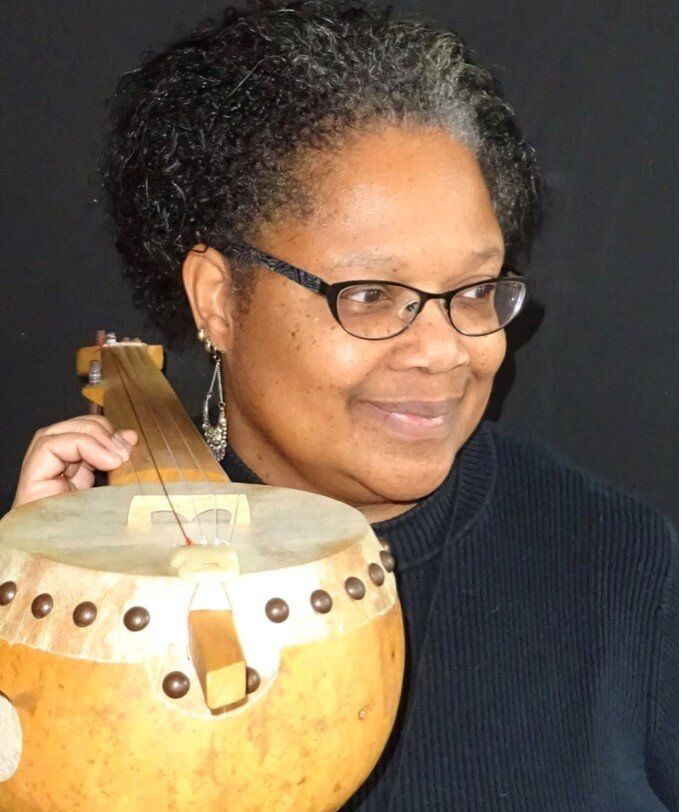 Dr. Dena Jennings will be one of two presenters featured in Arts Center of Orange’s ‘Untold Stories.’ 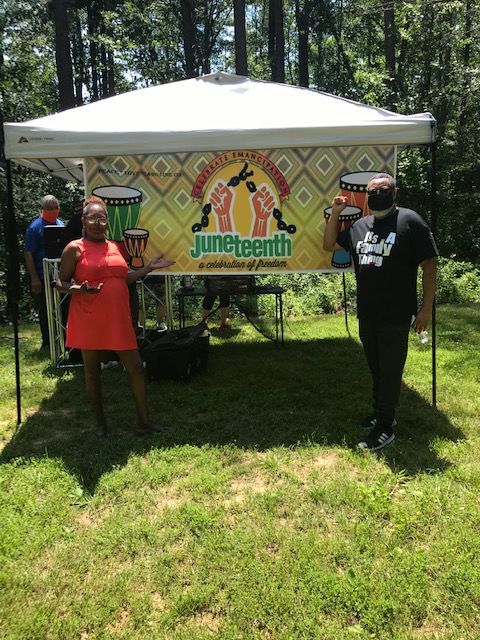 More than 100 people came together to celebrate Juneteenth last year at Caroline Recreation Park in Milford. This Saturday’s event will feature gospel groups, a spoken word artist and a skateboard contest with prizes.

By MARK WALKER FOR THE FREE LANCE-STAR

The Emancipation Proclamation was issued in September 1862, but word was slow getting to Texas.

It wasn’t until June 19, 1865, just after the Civil War ended, that U.S. Gen. Gordon Granger arrived in Galveston, Texas, with the word slaves had been freed.

The first celebrations to mark the date, then known as Jubilee Day, happened on June 19, 1866, and included barbecues, music, prayer services and other activities. Jubilee Day later became Juneteenth.

The tradition of celebrating the day waxed and waned in the South over the years, but recently Juneteenth celebrations have gained popularity nationally.

This Saturday, communities across the Fredericksburg area will take up the custom and host Juneteenth celebrations.

The annual Stafford Juneteenth Celebration at Pratt Park, 120 River Road, will start at noon with reenactors of the 23rd U.S. Colored Infantry posting the colors and a reading of Granger’s General Order No. 3 freeing the slaves. The celebration will end at 9 p.m. with fireworks.

There will be a full day of music, dancing, historic readings, panel discussions, face painting and games.

A parade, scheduled to begin 3 p.m. at Dixon Pool, will go down Caroline Street to Old Mill Park and cross the Rappahannock Bridge to meet a brass band on River Road in Stafford and finally, head to a finish in Pratt Park.

“I’m hoping that the community will join at the back of the parade and dance with us as we proceed into the park,” Yeung said.

Event performers will include Wolverine Thunder Alumni Step Team at 3 p.m., Image Band and the Caribbean Powerhouse at 4:30 p.m., Umbiance Center for the Performing Arts at 5:30 p.m., rapper YeYe at 5:45 p.m. and the go-go group Major League Band at 6 p.m.

Visitors to Pratt Park will see a lot of red, a color that represents strength in many West African cultures. Red might also represent the blood shed by generations of enslaved Africans, Holland said.

“I think a lot of people don’t realize the significance of red when it’s associated with Juneteenth,” Holland said. “During Juneteenth, you’ll see strawberry soda, you’ll see red velvet cake and things like that because it does symbolize that red you’ll see in just about every Juneteenth celebration in one way or another.”

Yeung said she hopes the day will bring people an awareness of Juneteenth.

“Our goal is to show the Juneteenth colors and the appreciation for what African Americans have done for this country,” Yeung said.

Harris said it’s important to remember Juneteenth as a part of American history.

“I think oftentimes a lot of people forget that Black American history is not just our history. It has helped shape this country. Just like we celebrate the Fourth of July, and we celebrate Cinco de Mayo, and we celebrate all of these other holidays and cultures and heritages. We should celebrate ours as well.”

The New Serenity Gospel Singers, the Nu Vision Gospel Singers and the 4 Sho Band will be at Caroline Park, 19127 County Park Drive in Milford, during the second annual Juneteenth celebration.

Event organizer, JoNi Rollins–Davis, said the celebration, scheduled to run between noon and 8 p.m., will also include a skateboard contest with cash prizes and skateboard giveaways for best trick, best run, biggest air and biggest ollie.

A semi-pro football team will run demonstration drills and youth football league will be looking to recruit players at the event.

Spoken word artist will perform and a speaker will give an informational talk about Juneteenth, Rollins–Davis said.

There will be 3-on-3 basketball and cornhole tournaments and kickball as well.

Caroline County Public Schools will also send its Caroline Cruiser, a blue bus filled with educational materials, activities and books to serve as a resource for county parents, Rollins–Davis said.

An Icee truck will be at the event, as well as Reggie’s Grill serving burgers, hot dogs and french fries. There will also be a food truck with steamed crabs and shrimp, Rollins–Davis said.

“It’s a big cookout. We want everyone to come out and celebrate it because it is history. The Fourth of July is for independence from British rule. Juneteenth was when everybody was free, when all men were free, and it needs to be celebrated on that level,” Rollins–Davis said. “We just want to get the community together, support each other, support small businesses, listen to good music and just hang out. We’re going to have a good time.”

Storytelling at Arts Center in Orange

The Arts Center in Orange, 129 E. Main St. in Orange, will present “Untold Stories,” featuring presentations by Michael Carter Jr. and Dr. Dena Jennings. The program, focused on the art of storytelling, will run from 11 a.m. to 12:30 p.m.

Michael Carter Jr. is an 11th-generation farmer in the United States and a fifth-generation farmer of Carter Farms in Unionville, where he offers workshops on how to produce and market ethnic vegetables. Among many other accomplishments, Carter works with Virginia State University as the Small Farm Resource Center coordinator for the Small Farm Outreach Program, said Anna Pillow, the executive director of the Arts Center in Orange.

“He’s going to be talking a little bit about the history of his family, their farm and his time in Ghana. He learned a lot of things there and he’s brought those practices back with him,” Pillow said. “His presentation is also going to focus on the history of Juneteenth.”

Dr. Dena Jennings is a science lover, human rights advocate and artist who plays gourd-based instruments of her own making. She will appear in a video that will be shown at the event and streamed on the center’s YouTube channel.

“We’re also going to be putting it on our Facebook page. It’s going to be on our main webpage as well,” Pillow said.

Jennings, who is a member of the Board of Directors at The Arts Center in Orange, will talk about her family.

“She has created a video for us called, ‘I’m on My Way,’ which talks about her family history about her great-great- grandfather who actually earned his freedom by working the Union Army,” Pillow said.

After visiting Camp Nelson near Lexington, Ky., where her great-great-grandfather joined the Union Army, Jennings played and recorded the song “Camp Nelson Blues” that will be included in the video.

The stories at the arts center will be good ones to hear, Pillow said.

“I think that it’s a really important moment to think about the stories that don’t always get told and whose stories do get told and why,” Pillow said. “Often we don’t hear those stories, so Juneteenth is just a great time to take time out to listen and learn.”

“We are asking people to let us know if they would like to come because we’re going to be filming and livestreaming the event. We just want to know how many people are coming so we can make enough room,” Pillow said.

Vendors, gospel singers, guest speakers and a community combined dance team will be part of the celebration with the Major League Band at Mayfield Park, 311 Glover St., between 11 a.m. and 5 p.m. Saturday.

This is a free family and community event where people can bring a picnic and enjoy bingo and other activities, according to the Mayfield Civic Association’s Facebook page. All fees will be donated to Elevate Our Youth to assist with youth programs.

Queen Elizabeth II Zoomed with Prince George on his birthday

"For him to reach out and do that, I don't even have the words. I wish I could just give him a hug," said the mother of one of the victims.

It’s the first major concert series in the city since shows at Celebrate Virginia in 2018.

On a field of mask-free, music-loving FloydFest revelers, a small table with a Virginia Department of Health banner was a relatively lonely sight.

With approval from board, region ready to rock for largest event in Pittsylvania County's history

Dr. Dena Jennings will be one of two presenters featured in Arts Center of Orange’s ‘Untold Stories.’

More than 100 people came together to celebrate Juneteenth last year at Caroline Recreation Park in Milford. This Saturday’s event will feature gospel groups, a spoken word artist and a skateboard contest with prizes.