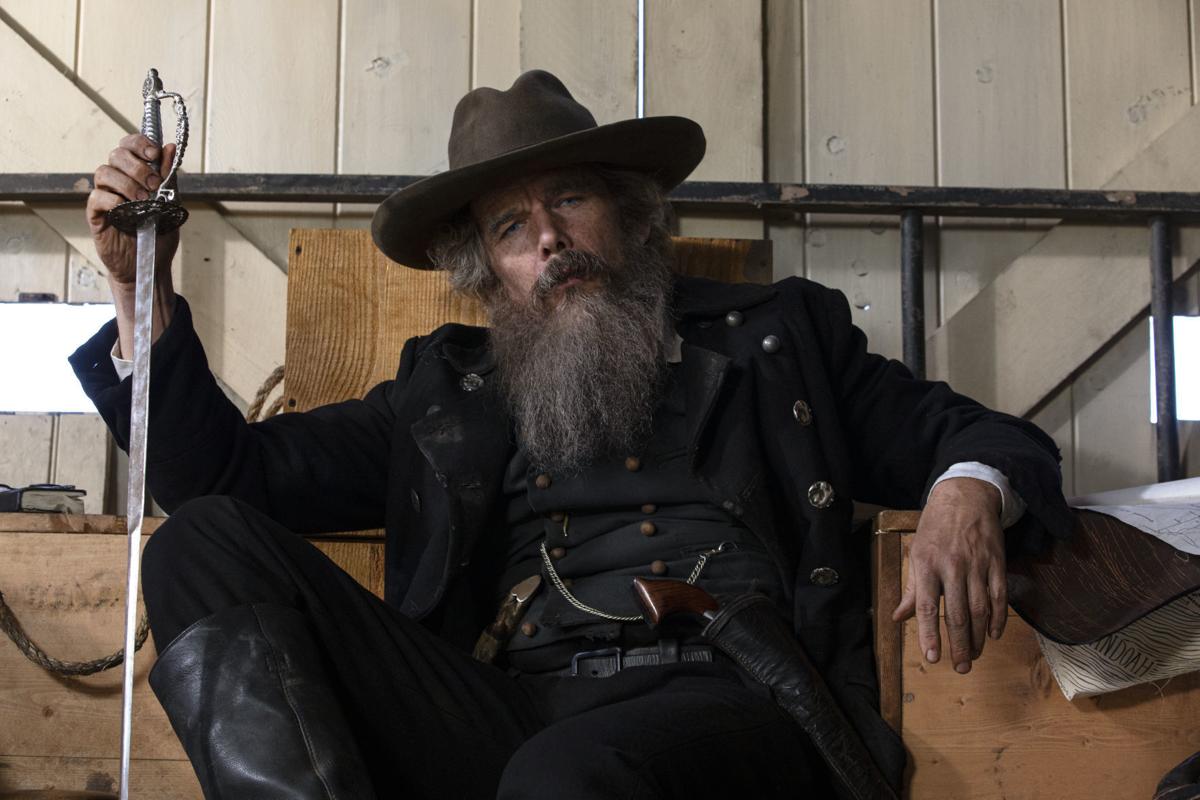 Ethan Hawke as John Brown in THE GOOD LORD BIRD. 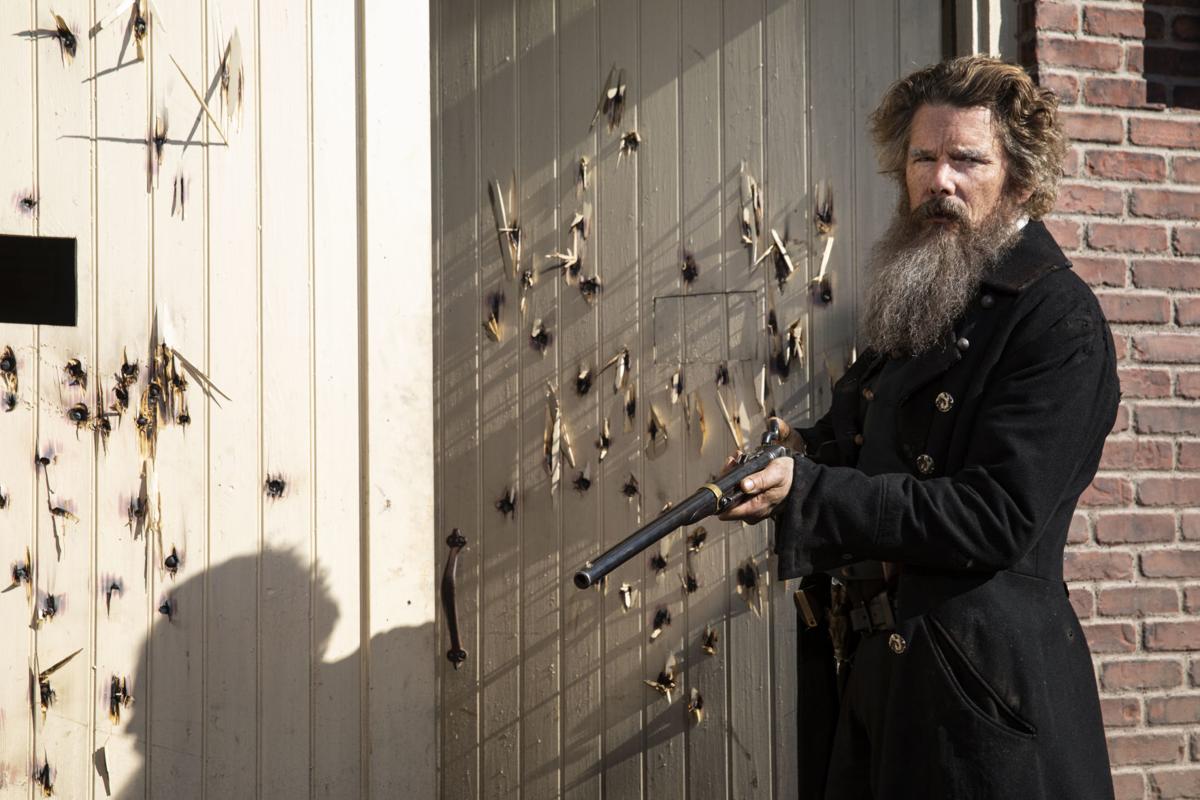 Ethan Hawke as John Brown in ‘The Good Lord Bird.’ 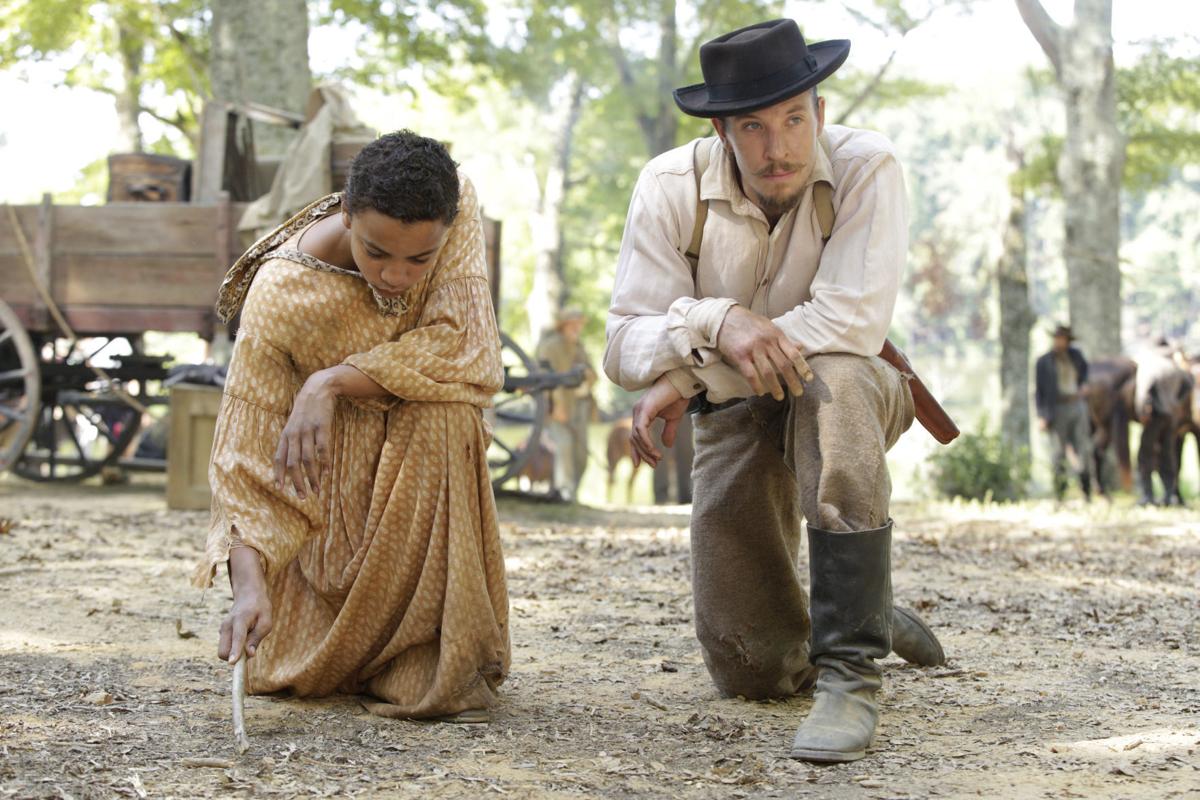 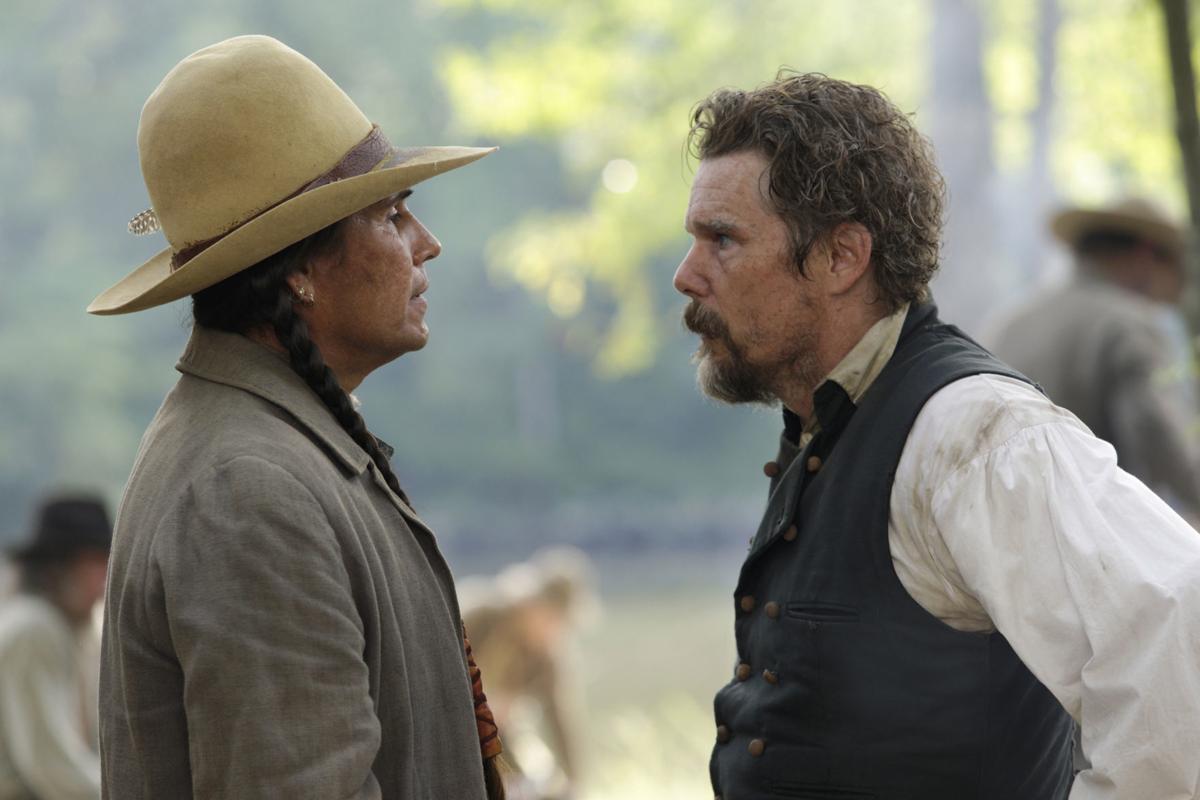 Mo Brings Plenty as Ottawa Jones and Ethan Hawke as John Brown share a scene in the ‘Meet the Lord’ episode. The series was filmed in Virginia. 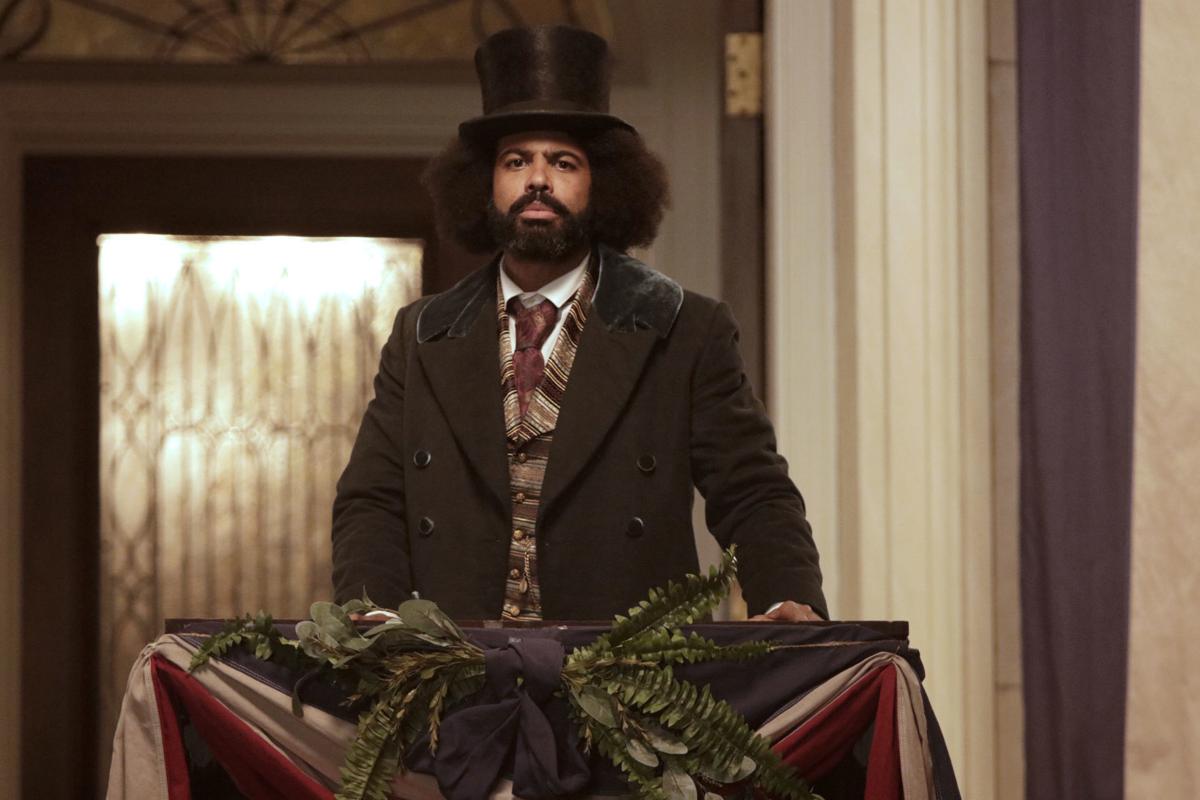 Hawke and his wife, Ryan, fell in love with the novel by James McBride in 2013 and have been trying to get it onto the screen ever since. Told from the point of view of Onion, an enslaved teenager who is mistaken for a girl, the book won rave reviews and the National Book Award for deftly handling issues of race, gender and slavery—while, at the same time, being a comedy.

Hawke stars in the series as John Brown and executive produced the show, along with his wife. Hawke has been described by many people as a modern “Renaissance man,” a literary actor, who got his start in “Dead Poets Society” and who has penned two novels himself and is drawn to meaty, complicated projects like “The Good Lord Bird.”

We chatted with Hawke about the series, what drew him to the character of John Brown, what it was like filming in Virginia and what were some of his favorite Richmond hang-out spots (hint: he loved Kuba Kuba and the Richmond Jazz Festival).

Why did you want to make this book into a series? How did the book speak to you?

I very rarely come across anything, no less a book, that makes me laugh the way this novel made me laugh. And when you consider the subject matter, the abolitionist movement in the late 1850s, it’s really quite a magic trick—to use wit and love to heal some of this country’s deepest wounds.

What intrigued you about the character of John Brown?

In what ways is he not intriguing? He was frugal with grand, world-changing aspirations. He’s a man of intellect and letters, and also salt of the earth. He waved the flag of the uncompromising view of human equality, while brandishing pistols. He was a man of many contradictions.

John Brown is a shining example of how someone can use their white privilege to stir things up for the good of everyone. Yes, after 50 years of being a non-violent abolitionist he resorted to violence. But the good news for our generation is that that blood was spilled a long time ago and the door has been broken open for this generation and the next to walk through peacefully, together.

What were the challenges of playing a character like John Brown? His costume alone looked like a challenge, especially in the Virginia heat. What was your take on him?

Well, there were the physical challenges and, for lack of a better word, spiritual challenges. The physical ones were exactly what you mentioned: wearing all that wool in August in 107-degree heat, carrying heavy shot guns, riding a horse and spouting biblical quotes while not fainting was tough.

Then there was the aspect of reenacting these incredibly painful scenes—where children are locked in cages with a for sale sign; where actors have to reenact lynchings and beatings. Placing yourself inside those situations exacts a heavy toll on your psyche. Then there was trying to understand how such a loving, religious man could justify violence. The more I think about it, there wasn’t a day that went by that didn’t create challenges for everyone on set.

How did you get into character?

Before we drove to Virginia, my wife—Ryan Hawke, an executive producer on the show—and I made two stops. The first stop was John Brown’s grave, in Lake Placid. The second stop was Harpers Ferry, now in West Virginia. Both of them served to inform us and inspire us in ways that are hard to articulate.

How do you think filming in Virginia spoke to the project? Did it lend authenticity, with Harpers Ferry? Did you have any favorite places that you filmed?

I can say without reservation that the community of Virginia welcomed us with open arms and showed us so much respect. It was enlightening to drive by all the Civil War monuments on the way to set. You could feel the history on every street of Richmond.

I appreciated and learned from the many wonderful local museums, many of which explore the history of slavery. I am particularly grateful for Christy S. Coleman, from the American Civil War Museum, for spending so much time with us, sharing her knowledge of day to day life of that time period, and the horrors that way too many Americans experienced.

The local crew members showed us a Virginian-good time— they fed us, taught us songs, and generally welcomed us.

A lot has happened since the filming, especially concerning the Black Lives Matter movement. How does this show and John Brown speak to some of the issues that we’ve seen playing out today?

We are all hearing the expression ‘systemic racism’ in the news and social media, more than ever. To fully understand that expression, you have to understand our history and the DNA of this nation—“The Good Lord Bird” lends a microscope to that DNA.

This show is told from the point of view of Onion, a young African American boy, who is trapped by the culture he was born into, and he is a precursor of what the Black Lives Matter movement is talking about. He matters.

You lived in Richmond in the Fan District while filming. What were some of your favorite things about Richmond?

My wife and I have lived in many places over the years, making movies all over the world. And I can say that there is no more welcoming community than Richmond, Va. The restaurants, the energy of the Fan and the surrounding areas were so much fun. Our whole family loved swimming in the James, watching films at the Byrd Theatre, playing pool at Greenleaf Pool Hall, playing basketball at the University of Virginia, visiting the Virginia Museum of Fine Arts, running on Belle Island, and eating lots of delicious meals at Kuba Kuba.

Andy Edmunds at the Virginia Film Office hinted that you might return for a future project. Is that true? Any hints?

If he gets me passes to the Jazz Festival again, it’s a done deal. I’d love nothing more than to work in Virginia again. And, I think everyone that worked on “The Good Lord Bird” feels that way.

JOHNSTON: Columbus haters are missing the boat on history

JOHNSTON: How do we celebrate holidays with COVID-19 around?

WE’RE HEADING for the holiday season and people are starting to wonder how things will play out with COVID-19 still very much a part of the picture.

Oscar-winning actor Jeff Bridges says he is being treated for lymphoma. Bridges' Hollywood career stretches over six decades and has starred in over 70 films including "True Grit" and "The Big Lebowski."

The Culpeper County Library is open to the public with limited hours, services and patron capacity.

The Billboard Music Awards took place Wednesday with Kelly Clarkson as the host. Here's the full list of nominees and winners.

The happiest states to live in the US

The happiest states to live in the US

Ethan Hawke as John Brown in THE GOOD LORD BIRD.

Ethan Hawke as John Brown in ‘The Good Lord Bird.’

Mo Brings Plenty as Ottawa Jones and Ethan Hawke as John Brown share a scene in the ‘Meet the Lord’ episode. The series was filmed in Virginia.