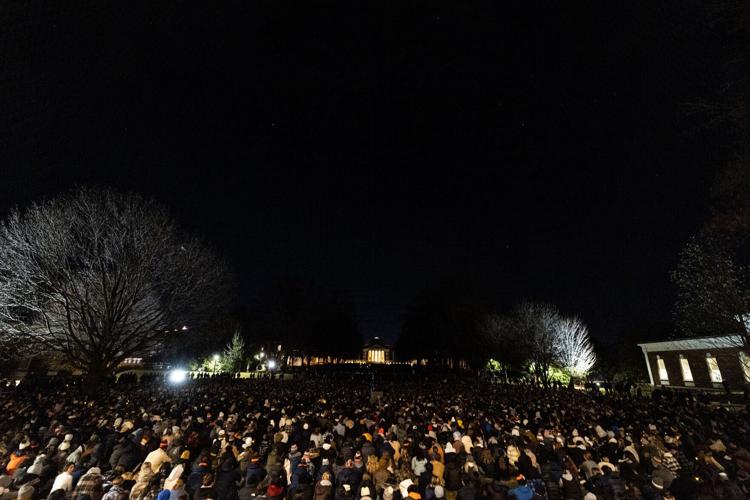 University of Virginia students participate in a vigil on Nov. 14, 2022, after three student athletes lost their lives in a shooting. 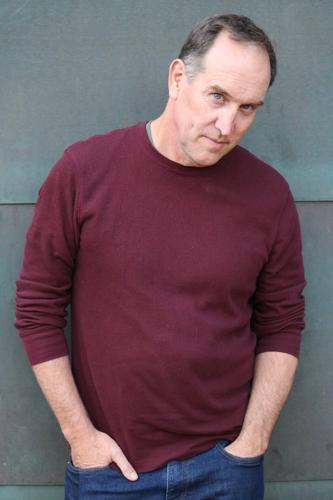 Singer-songwriter John Kelly was inspired to write "Three Bright Stars" after being moved by the sight of thousands of University of Virginia students honoring their own in complete silence. The new song will be available Tuesday on all streaming platforms.

A new song written by a Charlottesville singer-songwriter was inspired by a moment of profound silence.

John Kelly said he watched from a rise above the University of Virginia’s South Lawn while thousands of students gathered to honor UVa football players and fellow students Devin Chandler, Lavel Davis Jr. and D’Sean Perry, who were shot and killed Nov. 13 after returning from a field trip. Two other students were wounded by gunshots but survived.

Students organized the Nov. 14 vigil to honor their fallen classmates and grieve together. Kelly said he ran into a friend, photographer Eze Amos, in downtown Charlottesville and walked with him to the vigil. He was moved by what he witnessed.

“That was one of the most powerful things I’ve ever seen,” Kelly told The Daily Progress. “They came by the thousands, and they were completely silent. The nylon of jackets while people walked by was the only sound.”

When he returned home, still processing what he’d seen, Kelly said he was mesmerized by a photograph of the vigil that had been posted to UVa President Jim Ryan’s Instagram account. The image by Matt Weber, chief creative officer and special adviser to Ryan, captured a sea of students on the Lawn — and three particularly vivid stars in the dark sky above them.

“I was struck by the way the students designed what they wanted for themselves and stuck to it. It was just remarkable to witness,” Kelly said. “Then, I got home that night and saw that photo. I had not seen the three stars above that scene while I was there.”

Kelly said he dove into reflection and writing. The resulting song, “Three Bright Stars,” will be released Tuesday on all streaming platforms.

Kelly shared his song with Jody Kielbasa, UVa’s vice provost for the arts. They’ve worked together for years through the Virginia Film Festival, which Kielbasa directs and for which Kelly leads publicity. Kielbasa quickly offered his support for a recording of “Three Bright Stars.”

Local music lovers flocked to help turn the song into a track. Recording took place over two December weeks at James McLaughlin’s Mountainside Studio, where McLaughlin played drums. Musicians from the community pitched in, including Rusty Speidel on guitar, Michael Clem on bass and Chris Holden and Daniel Clarke on keyboards.

Kelly said he felt it was important to bring UVa students into the project, so he contacted Michael Slon, director of University Singers. “Michael Slon, during finals week, graciously put together eight singers to come out to the studio,” Kelly said.

Students Rachel Bohannon, Ellen Woodard, Madeline Martin, Holly Teti, Miles Jackson, Ryan Poquis, Andrew Alexis and Jack Siegel provided a choral background for the new track. Kelly said he was impressed by the way they collaborated with Slon to create and perform their vocal parts on the spot to suit the moment — and a different musical genre.

“It’s much different from singing a requiem,” Kelly said.

Before recording “Three Bright Stars,” Kelly sought the feedback of fellow songwriters whose opinions he trusted, because it was important to him that the song honored the students and didn’t settle for platitudes.

“I’m not trying to say I understand something that’s not understandable,” he said. “The last thing I wanted to do was put myself in a position where I was claiming any understanding. What I can do as a writer is to say what I saw.”

What the father of two college students saw the night of the vigil was that “in the students’ reactions, there’s hope.” His heart went out to a generation that has faced a variety of trials — first the pandemic and then the shooting — and shown resilience and character. And, as demonstrated at the vigil, a recognition of safety in numbers.

“I was moved by how much they’ve been through,” Kelly said. “I admire all these students because of what they have been enduring. These kids have been through an extraordinary amount, and yet, they continue to impress at every turn.”

Kelly finished “Three Bright Stars” on a Monday and took it with him that night to the weekly songwriters’ night at the Local restaurant in Charlottesville’s Belmont neighborhood.

He and his song received a warm reception from his peers, he said.

“It told me that the song had done what I wanted it to.”

Ozzy Osbourne cancels all shows, says his touring career is over

The heavy metal legend has suffered a series of health setbacks in recent years.

The most popular songs that never won a Grammy

These tracks may not have won any Grammys, but they were all wildly successful with listeners.

Grammys 2023: How to watch and who’s performing at the ceremony

Music’s biggest night returns to Los Angeles for the 65th Annual Grammy Awards on Sunday. Here's a look at how to watch, who's performing and more.

Jessica Simpson was pursued by 'massive movie star' in mid-2000s

Jessica Simpson was pursued by 'massive movie star' in mid-2000s

University of Virginia students participate in a vigil on Nov. 14, 2022, after three student athletes lost their lives in a shooting.

Singer-songwriter John Kelly was inspired to write "Three Bright Stars" after being moved by the sight of thousands of University of Virginia students honoring their own in complete silence. The new song will be available Tuesday on all streaming platforms.