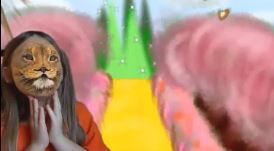 Jesse Dowdy plays the Cowardly Lion, among other characters in Stage Door’s ‘The Wizard of Oz.’ Every cast member carries more than one role in the production. 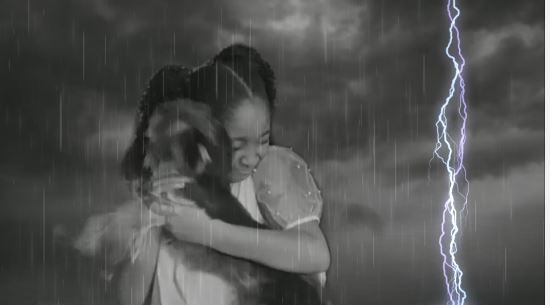 Myla Rae Wood embraces the role of Dorothy, with Mochi as Toto (Mochi) in ‘The Wizard of Oz,’ débuting online this weekend as part of Stage Door’s youth theater workshop. 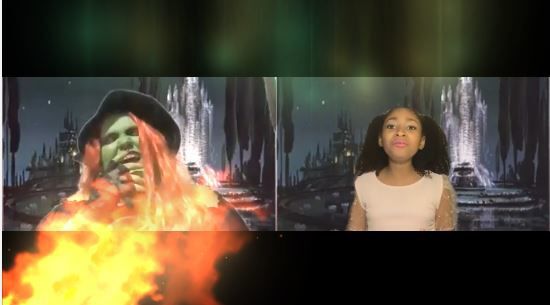 The folks at Stage Door have found the recipe for making a production of the classic tale of “The Wizard of Oz” more magical than ever before. Take a group of young actors with boundless talent, enthusiasm, creativity and imagination. Add one dedicated, inspirational, empathetic and visionary director. Blend well, and voila!

In this weekend’s virtual performance, the magic is not only in the story but in the innovative minds and hearts of all who are involved in creating it.

A tale familiar to most families, the story of “Oz” follows a young farm girl, Dorothy, who is whisked away in a tornado and lands in the unfamiliar and unpredictable land of Oz. From there, her mission is single-minded—to return to her beloved aunt and uncle in Kansas. She journeys bravely forth, befriending a scarecrow, tin man and cowardly lion along the way, and ultimately striving to seek help from the legendary Wizard in the Emerald City.

“I chose the story of ‘The Wizard of Oz’ because it is a classic and filled with parables with messages that can be received on multiple levels that our community, especially our youth, can learn life lessons from,” said artistic director Amy Beach. “In addition, it has roles that children in our community can grow from and hone their skills in acting.”

While bringing delightful and thought-provoking entertainment to its viewers, Stage Door’s version emerged from a youth theater workshop, which was designed to tap and augment their creative processes as they took on virtually every role of the cast and crew of a production.

When they began the workshop, all the participants were ensured a role in the production but, rather than having their characters determined through a conventional rehearsal process, they—in a sense—cast themselves for the show.

“After several read-throughs of the script, I asked the each of the students to write down their top three or four role choices and I casted from there,” said Beach. “Everyone got at least one part that they really wanted.”

In making the final casting decisions, Beach took into account the youths’ portrayal of characters in reading for various scenes. For Dorothy, Beach chose Myla Rae Wood, a multi-talented youth who has participated in a variety of productions but had never tried her hand at acting. As Beach explains, Myla’s freshness to the arena of theater influenced the choice of the role she would play.

“What I loved about Myla was her innocence,” said Beach. “When she read her lines, she just had this sense of wonder in her voice and when I heard her, I knew: That’s our Dorothy!”

Myla also contributed to the production by identifying copyright-free music that is used to convey the emotion of the scenes.

Impressively, the entire production is played by just six young actors, with various levels of stage experience, each of whom plays multiple roles.

“I am a firm believer that our youths are super-talented and that they need more challenging material. Asking them to play multiple roles is definitely challenging, and it’s a challenge they are meeting wonderfully,” said Beach.

Each week of the workshop focused on one element of a theatrical production, including acting methods and techniques, costuming and set design. “I did the final editing and put all the scenes together, but the kids did all the design work,” said Beach.

The beginning of the workshop entailed script analysis to inspire the actors to flesh out their characters, each in a unique, consistent and credible way.

“From day one, everything these kids have done has impressed me. Script analysis is a tough thing to do and involves a kind of psychology,” said Beach. “The actors imagine why their characters do what they do, what their background is, who they are friends with and who they like and don’t like, and even what their favorite foods are. They go through that process to get into the minds of their characters.”

As a result of this exercise, Jesse’s Aunt Em has a Southern accent and is knitting a scarf when we first meet her, while Lyla portrays Oz as a cantankerous old man and her Guard as a frustrated man with dry humor who would rather be on his lunch break than dealing with Dorothy and her crew.

“Once you understand the characters and who they are, you can apply that to your real-world experiences as well. It develops a sense of empathy with others,” said Beach. “I asked the students why the Wicked Witch turned out like she did and what happened to her and I received many different answers. Then they each came up with their own characters’ backgrounds so they could understand them better.”

Even the Monkeys have a unique personality (from snarky and catty to sweet) with a name and their own relationship with the Wicked Witch and their own motivation for serving her.

Every element of the online production—including sets, costumes and makeup—were created by the young actors. Each created their own background—from a rough draft to fine tuning after group discussions—to produce a final Zoom background. Costumes were created from clothing that the students had at home, and makeup ranged from the green tint of the Wicked Witch’s face to the metallic visage of the Tin Man.

“They really did a great job of creating the world of Oz as they see it. And inviting us to see the realm they created,” said Beach. “My goal in the workshop was to provide the youth who aspire to work in professional theater with a sense of that experience.

In addition to acting skills, the experience of performing helps them to develop a sense of empathy, an acceptance of themselves and others, and an understanding of the true heart of friendship.”

Khloe Kardashian and Tristan Thompson have broken up again

Khloe Kardashian and Tristan Thompson have broken up again

Innsbrook After Hours concerts will be held at the Innsbrook Pavilion this year starting with NO BS! Brass Band on July 7. The concert series will be held on Wednesdays throughout September.

After a global pandemic-induced staycation summer last year, people are ready to hit the road for a return to summer vacation.

All over Hampton Roads, Surf Rider is renowned for its crab cakes, made with so little binder they can’t be fried. The local chain’s lump-filled cakes bested the competition in two consecutive Virginian-Pilot taste tests, not to mention a recent blind-judged crab cake throwdown. But this year, said its third-generation co-owner, Chris Bennett, he almost had to take them off the menu. The ...

Cracker frontman David Lowery comes out of lockdown and into Fredericksburg

Cracker performs at Strangeways Brewing in Fredericksburg on June 27.

Waddling into view are the stars of Netflix's 'Penguin Town'

This Saturday, communities across the Fredericksburg area will host Juneteenth celebrations.

Jesse Dowdy plays the Cowardly Lion, among other characters in Stage Door’s ‘The Wizard of Oz.’ Every cast member carries more than one role in the production.

Myla Rae Wood embraces the role of Dorothy, with Mochi as Toto (Mochi) in ‘The Wizard of Oz,’ débuting online this weekend as part of Stage Door’s youth theater workshop.