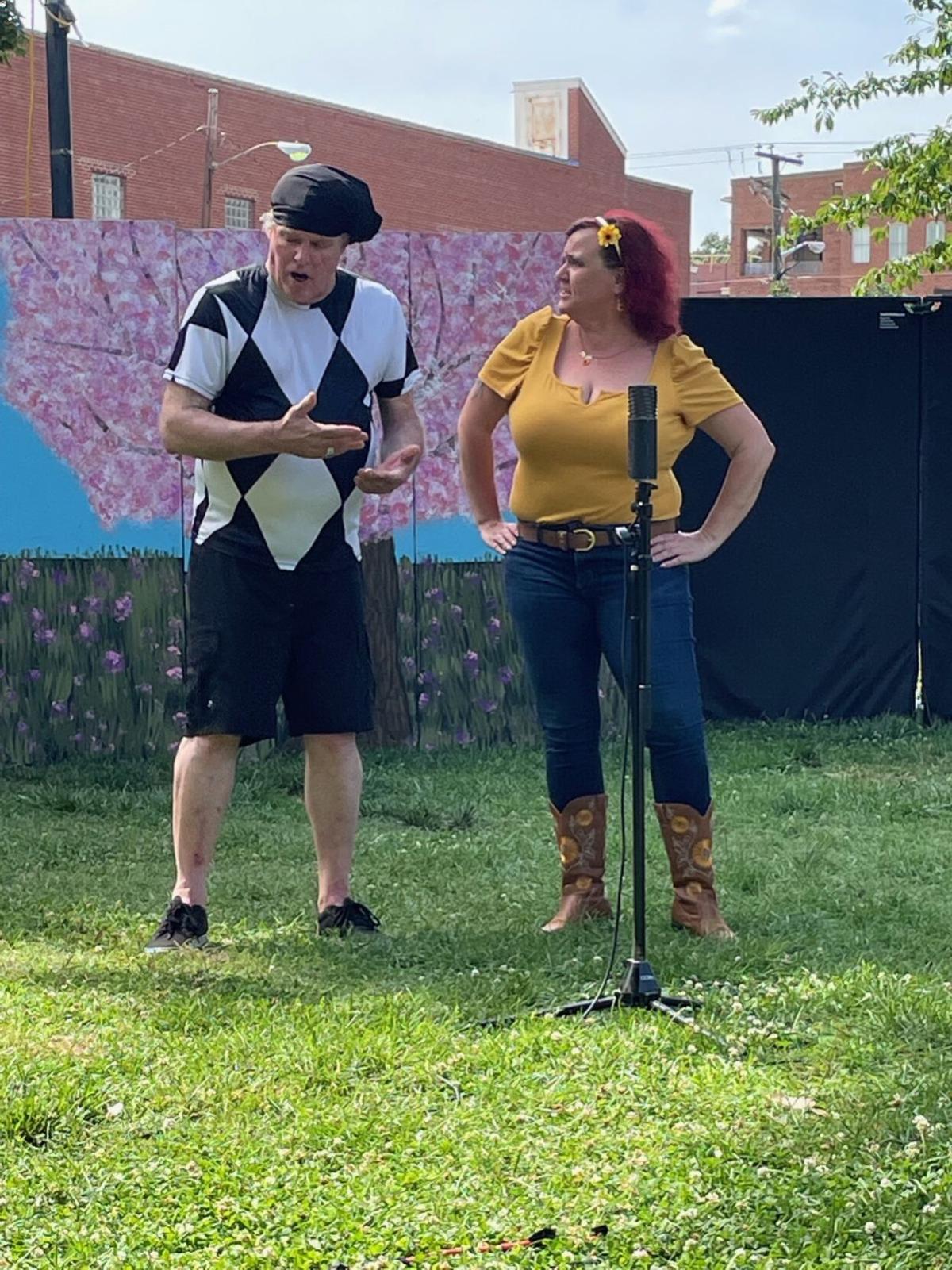 Stage Door presented the Shakespeare comedy to audiences virtually last year because of the pandemic. 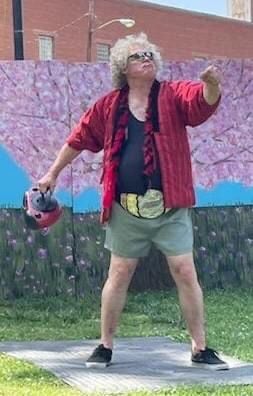 Stage Door’s ‘As You Like It’ ends its run this weekend on its new theater stage. The group performed the beloved Shakespeare comedy last weekend, outdoors at Fredericksburg's Hurkamp Park. 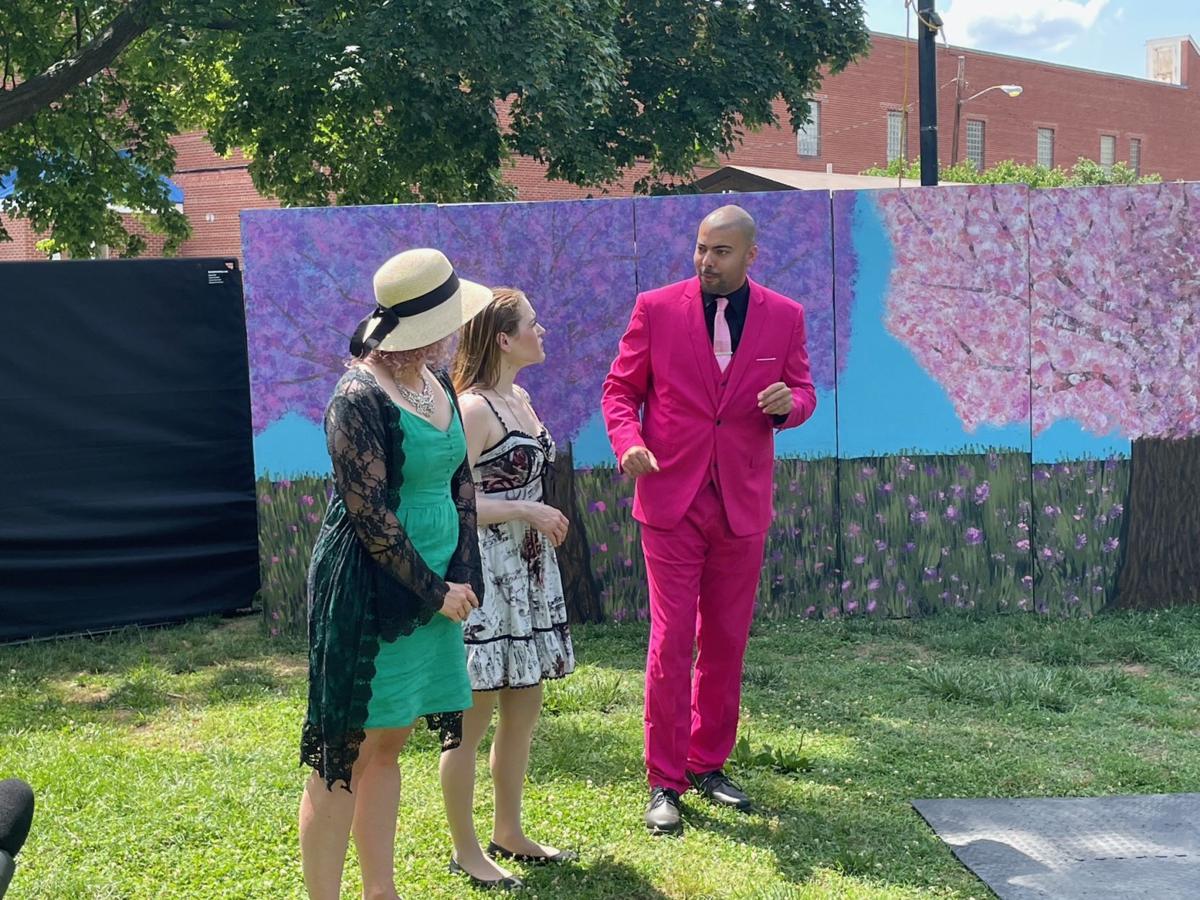 Stage Door’s ‘As You Like It’ ends its run this weekend on its new theater stage at 810 Caroline St. in Fredericksburg. The group performed the comedy outdoors last weekend at Hurkamp Park.

For the first time since theaters shuttered across America in response to the COVID-19 pandemic in 2020, Stage Door Productions is hosting a live, in-person production. The Fredericksburg company is reviving Shakespeare’s “As You Like It” for in-theater viewing.

“As You Like It” will be performed on Stage Door’s new stage at 810 Caroline St. this Friday, Saturday and Sunday. Tickets are $16 per person.

The production is being directed by Bill Green, a retired English professor and writer who is also a member of the board of Stage Door Productions. He directed the play last year, too, when Stage Door presented it virtually for viewers during the pandemic.

“As You Like It” was scheduled to be last summer’s play until the pandemic hit,” said Green. “Last year I directed the play online. When the opportunity appeared, Stage Door and I welcomed the opportunity to re-create the show onstage.”

He said seeing the play—and rehearsing it—in a real theater is a different experience. The group also staged the play outdoors in Hurkamp Park last week.

“ ‘As You Like It’ is one of William Shakespeare’s most popular and lighthearted plays, an honor it shares with ‘A Midsummer Night’s Dream’ and ‘The Comedy of Errors,’ which I directed a few years ago,” said Green.

He explained that the story begins with lovers driven by political intrigue into the Forest of Arden, where romance and confusion ensue. In the end, four couples—half of the cast—end up married. On the way, there is cross-dressing, unrequited love and commentary by the melancholy Jaques, who famously declares that ‘all the world’s a stage.’”

During this production, the main characters of Rosalind and Orlando are played by Kani Fox and Josh Cole, respectively.

Green said it’s “been a delight to be back onstage” with them. The stage, though, for Stage Door, is a new one. They have moved to the fourth floor of 810 Caroline St., having previously been in the building’s basement.

Moving gives the group more space and allows them to build out more permanent seating and a larger stage. It also allows a bigger audience to enjoy the beloved comedy.

Green is presenting a shorter version of “As You Like It,” running just over an hour with an intermission. He had edited the script to make it accessible to modern viewers. For example, at one point Shakespeare used the Elizabethan slang “cot” meaning “cottage.” Green’s version changes the word to “house.”

“Shakespeare didn’t mean for you to misunderstand,” Green said. In fact, the Bard wrote for the masses.

And in the end, Green said, he and the cast “just want to entertain.”

“It’s kind of comedy you don’t laugh through, but you come away with a pleasant feeling. There are a lot of smiles to be had. It has a happy ending.”

“As You Like It” has endured so long because of its approach to love, to gender as the characters conceal identity, to the injustices against the main characters—and ultimately forgiveness.

Stage Door has been performing and offering educational theater programs and training locally since 1999. Each season includes three or four main stage plays, including one Shakespeare production, an original One Act Play Festival and two youth performances.

The company’s goal is to preserve the art of live theater by inviting community members of all ages and backgrounds to become part of the theater scene. They’re hoping with the new space, and a return to the stage, they can do just that.

“As You Like It” by Stage Door Productions, 810 Caroline St., Fourth floor. 7 p.m. Friday and Saturday, and 2 p.m. Sunday. $16 per person. stagedoorproductions.org.

JOHNSTON: On long winter nights, a fire soothes the soul

A crackling blaze can transport us back to a time when travelers stopped to camp for the night or cowboys on night herd warmed coffee by a campfire.

Dwayne "The Rock" Johnson recently created an unforgettable moment for one special, and deserving, fan.

You can rent ‘Home Alone’ house on Airbnb, complete with booby traps and holiday decorations

This holiday season, you can recreate your favorite “Home Alone” scenes by booking the Illinois house featured in the film for one night only on Airbnb.

Sharon Zarambo experienced substantial loss in the past year, funneled her energy into large colorful pieces now on display at historic Possum's Store.

JOHNSTON: Let's take a moment to give mules their due

An appreciation: Perfectionist. Genius. Icon. That was Stephen Sondheim

The theatrical giant, who died Friday at 91, was as complex as his lyrics, dogmatic in his rules and not generous with praise about his work.

This is the time of year when the Virginians Barbershop Chorus usually would be putting the finishing touches on its Christmas show.

Two documentaries, "Black and Missing" and "Murdered and Missing in Montana," break the true-crime mold and instead highlight cases of Black and Indigenous women who've gone missing.

Review: 'Wish You Were Here,' by Jodi Picoult

Alone and out of touch on the Galapagos during the COVID-19 lockdown, a young woman reconsiders her life. "Wish You Were Here" by Jodi Picoult; Ballantine Books (338 pages, $28.99) ——— March 13, 2020. The first words of Jodi Picoult's novel strike dread, or at least trepidation. Do we really want to relive those disorienting, soul-crushing first days of the shutdown felt around the world? ...

Stage Door presented the Shakespeare comedy to audiences virtually last year because of the pandemic.

Stage Door’s ‘As You Like It’ ends its run this weekend on its new theater stage. The group performed the beloved Shakespeare comedy last weekend, outdoors at Fredericksburg's Hurkamp Park.

Stage Door’s ‘As You Like It’ ends its run this weekend on its new theater stage at 810 Caroline St. in Fredericksburg. The group performed the comedy outdoors last weekend at Hurkamp Park.