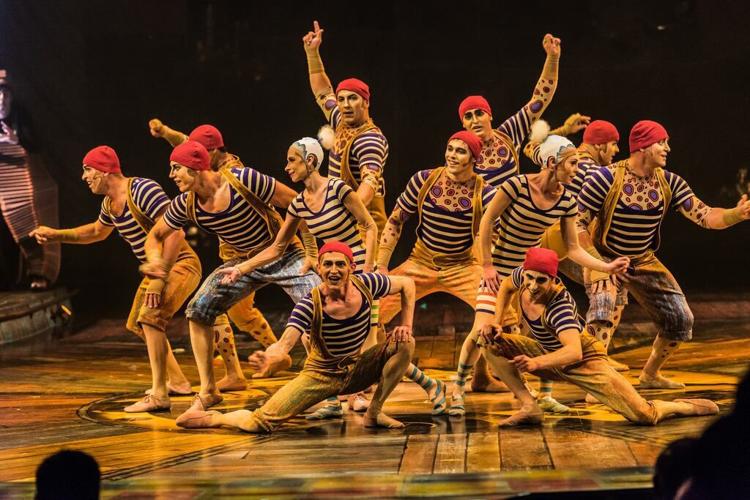 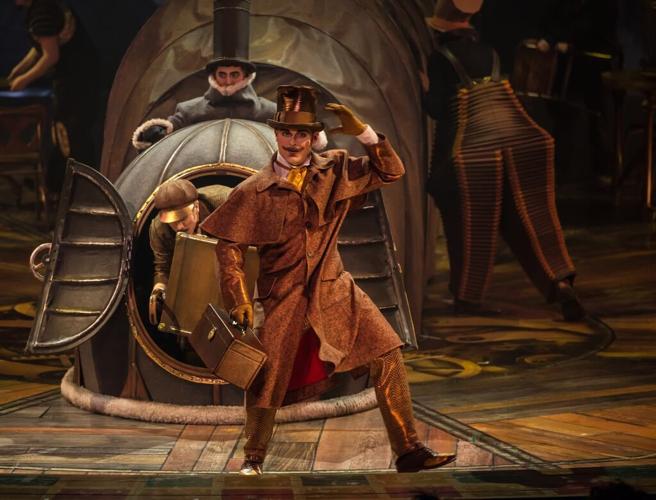 (Above and below) Meet the The Curiosistanians, inhabitants of an imaginary country called Curiosistan, in spellbinding storyline. 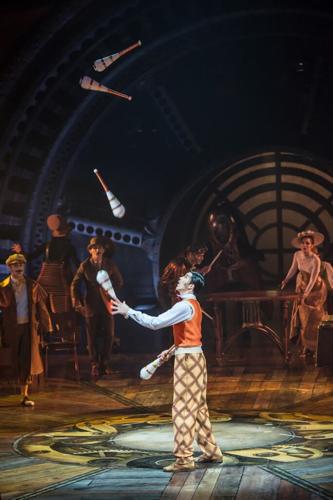 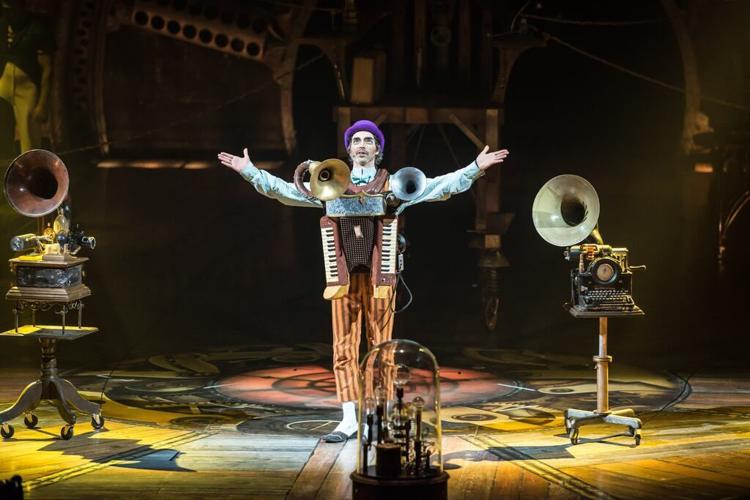 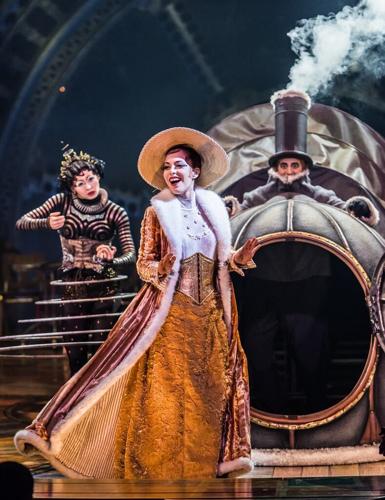 A locomotive lets off a motley group of passengers straight from the 19th century, including Klara the Telegraph of the Invisible and performers in their Sunday best in ‘Kurios.’ 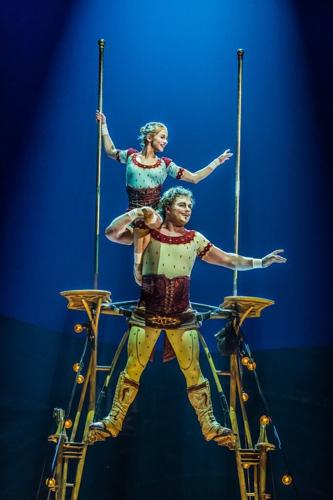 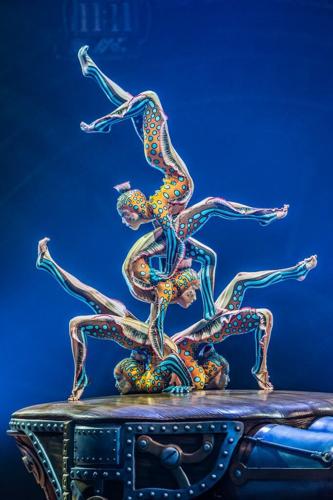 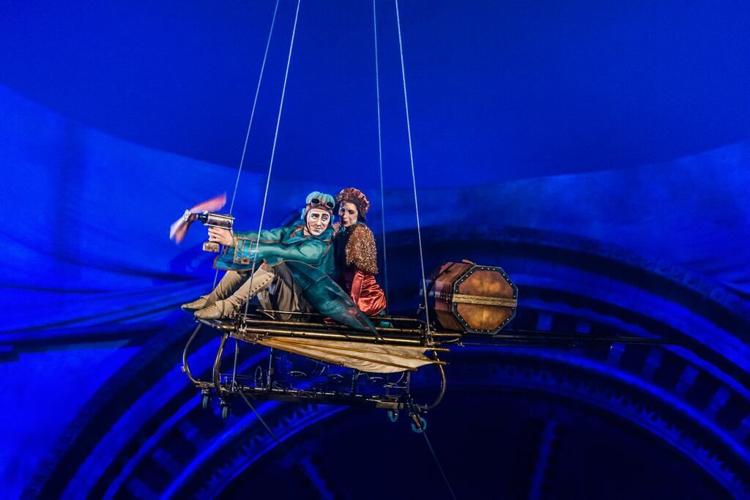 Embark on a wild theatrical adventure with Cirque du Soleil. 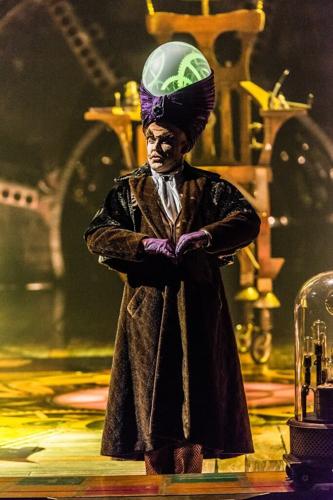 By COLLETTE CAPRARA FOR THE FREE LANCE-STAR

Families who experience Cirque du Soleil’s “Kurios” at the Lerner Town Square at Tysons II better hang on to their hats. They are about to be transported to a magical world where anything is possible and outlandish, otherworldly things happen before their eyes that defy what we know as the laws of physics, time and space.

The action begins with the entrance of an eccentric and ambitious inventor and bric-a-brac collector, The Seeker, who ventures to create a threshold to the imaginative dimension of dreams. Once that portal is open, it is immediately clear that travel between the dimensions is two-way and a host of fantastic characters spring forth, which are the living incarnation of the essence of objects in his curio cabinet.

Conveyed with a steampunk motif, the fantasy scenario harkens to the Victorian-era industrialism in which brave adventurers and inventors dared to bring their wildest dreams into reality, as many succeeded in doing.

The characters who seem to materialize before our eyes include: Nico the Accordion Man, who can be at eye-to-eye at virtually any level; Klara, whose skirt of multiple hoops serves to telegraph and substantiate the invisible; and a brigade of Kurios robotic assistants that the Seeker built from an array of scraps and recycled parts.

Most fascinating of all is Mr. Microcosmos, the embodiment of technological progress, whose body resembles a sea-exploration sphere of Jules Verne, but, surprisingly, is home to a character named Mini Lili. Her small stature is coupled with big-time spirit and sparkle and who represents her host’s unconscious mind and intuitive heart. In fact, it took a team of prop-makers approximately 250 hours to build Mr. Microcosmos’ round belly.

The production features an array of more than 100 hand-crafted costumes that mimic the spirit of the performers’ characters. For example, an opening number features a team of interlocking contortionists, whose awesome choreography and seemingly impossible moves and postures convey a crew of electric eels that join to create a majestic sea creature.

Characters are enhanced by vividly dramatic makeup that the performers apply themselves, which allows their emotions and reactions to be easily understood by audience members at a distance. The facial expressions are similar to those of mime performers, who deliver easily read messages and “winks” to their audiences.

As fascinating as the humorous, mesmerizing tale is that unfolds before us and encompasses the arena, the story line serves, above all, as a means of introducing the fast-paced, high-energy performances by world-class acrobats, trapeze and aerial-strap artists and jugglers who portray the characters. Among this array of acclaimed performers are the Acro-Net artists portraying underwater creatures launched to incredible heights on a super-resilient trampoline.

The Acro-Net is a unique invention of Cirque du Soleil that was created by experts who saw opportunity in the problem of safety nets that rebounded the acrobats who landed on them. Rather than minimizing the bounce, they brought it to the upper limits. Trailblazing technology also conveys the simple poetic story told by an artist who uses only his fingers in action that is filmed and projected on a hot-air balloon screen, as well as a miniature “Invisible Circus” with an animated teeterboard and high-riding tightrope unicyclist that forms in our minds through the sheer power of visual and sound effects.

The seemingly facile moves and seamless fluidity of the show belies the tremendous investment of effort, skills, talent, practice and training of the 100-plus cast and crew members. Representing 16 countries, 46 artists perform death-defying feats, many of whom have spent their lives honing their skills and may be second- and third-generation circus performers. In addition to the cast, there are those behind the scenes, including those who worked to erect Cirque’s hallmark big top tent; design the props, sets and lighting; write and direct the script; create the acrobatic and rigging equipment; and compose the music.

Throughout the production, the functioning of performers’ equipment is closely monitored and adjusted by technical experts and a central director who stays in real-time communication with all to ensure the synchronization of all elements with any variations in the pace and crescendo of the artists.

The mission of Cirque du Soleil has been constant since its launch in the early ’80s as fun-filled shows of street performers near Quebec City who roamed the town striding on stilts, juggling, dancing, breathing fire—bringing delight to all they encountered.

“We never sit back and say we have a good show. We love our show and want to keep it fresh and alive,” said writer and director Michel Laprise. “We are so privileged to work here and participate in this magical relationship with the audience. My hope is that people will gain a realization of the amazing and beautiful things that humans are capable of achieving.”

JOHNSTON: All the signs point to a snowy winter

DESPITE some hot, muggy afternoons, we had a pretty normal Central Virginia summer.

'Monsters Among Us' for October films in Packard Campus Theater

On tap to start off a frightening month in classic cinema is "Gaslight" for the Saturday matinee followed by Hitchcock's chilling thriller, "Psycho" Saturday night.

Coolio died Wednesday at the home of friend in Los Angeles. Here's what is known so far about his death, plus a look back at his life, in photos.

Post Malone was due to take to the stage at the TD Garden in Boston on Saturday but pulled the plug after finding that he was "unable to move." Plus, Hilaria Baldwin gives birth to her seventh child, and more celeb news.

Williamsburg chef to appear on ‘Hell’s Kitchen’ this week

A local chef is heading to “Hell’s Kitchen” — and not the restaurant in Norfolk. A place much more fiery. Ileana Gabrielle D’Silva, a sous chef at Casa Pearl in Williamsburg, will be on the season premiere of Fox’s “Hell’s Kitchen” Thursday. The host is Gordon Ramsay, who is known for his multitude of cookbooks and international restaurants, as well as his quick temper. This season’s cooking ...

Brian Welch of Korn coming to Culpeper for conversation on addiction, family, redemption

HOLLIFIELD: When you get good and darn well ready

“Now you wait a goldurn minute,” I said, letting her know who wears the pants in this relationship. “This is an 18-year-old truck made for hard work and rambunctious play, not some shiny toy for a drugstore cowboy ..."

Due to expected inclement weather, the 2nd Street Festival set for this Saturday and Sunday has been cancelled.

Melanie Taylor, founder of The Church Without Walls nonprofit, hosts a women’s fellowship and Bible study locally every month.

Hocus Pocus 2: They're Back (Spot)

(Above and below) Meet the The Curiosistanians, inhabitants of an imaginary country called Curiosistan, in spellbinding storyline.

A locomotive lets off a motley group of passengers straight from the 19th century, including Klara the Telegraph of the Invisible and performers in their Sunday best in ‘Kurios.’

Embark on a wild theatrical adventure with Cirque du Soleil.