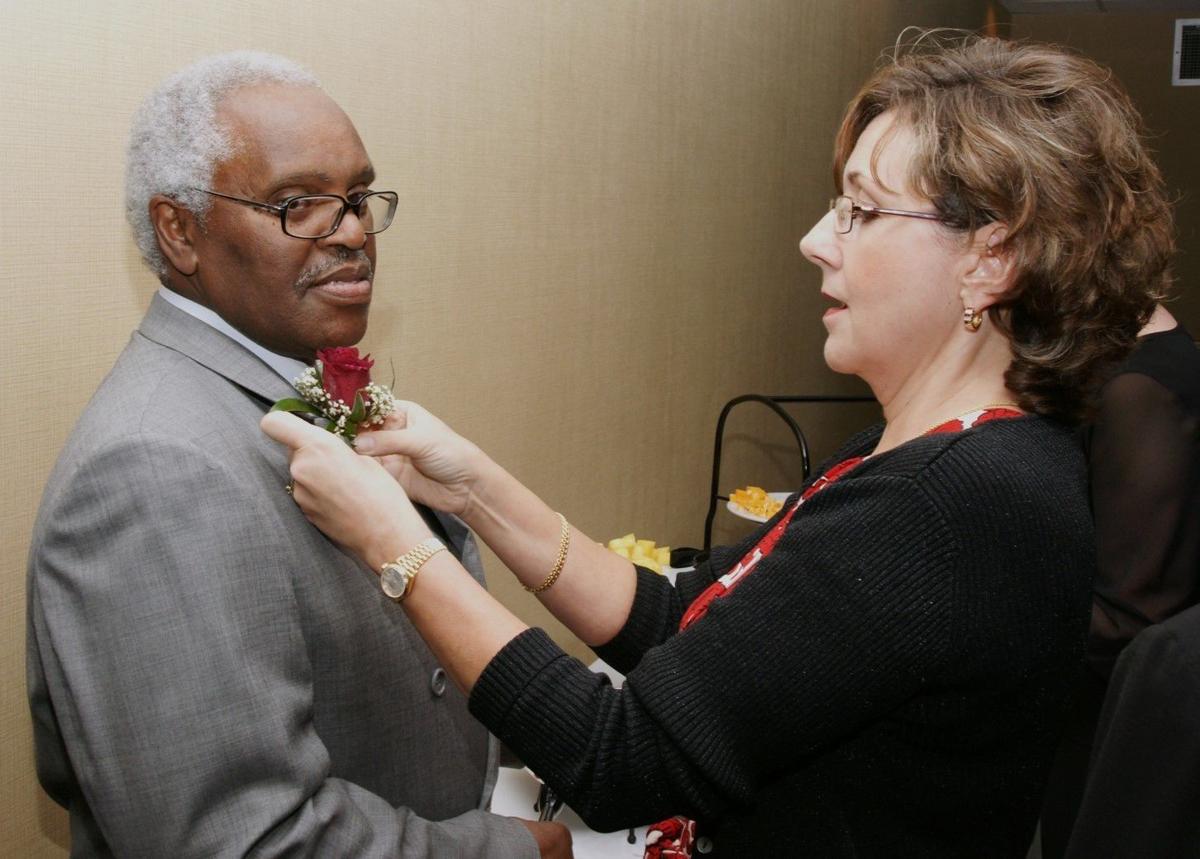 Bobby Wilson upon his retirement in 2010. 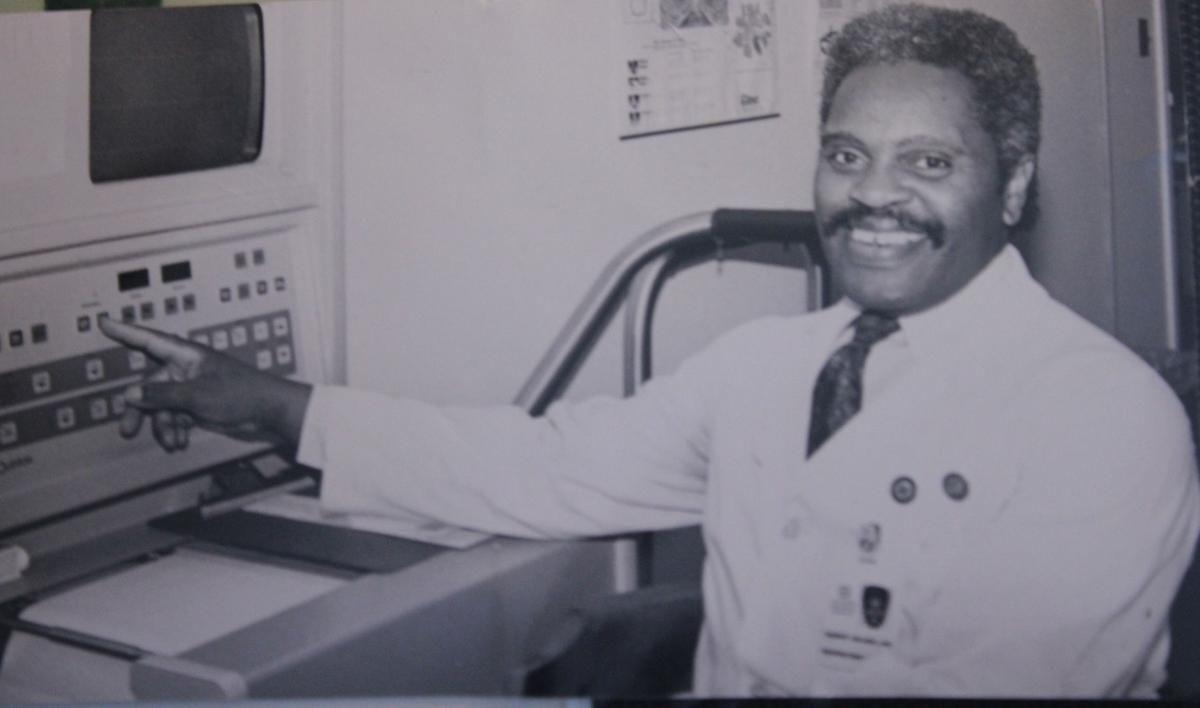 Bobby Wilson worked at the Culpeper hospital for four decades, retiring in 2010. 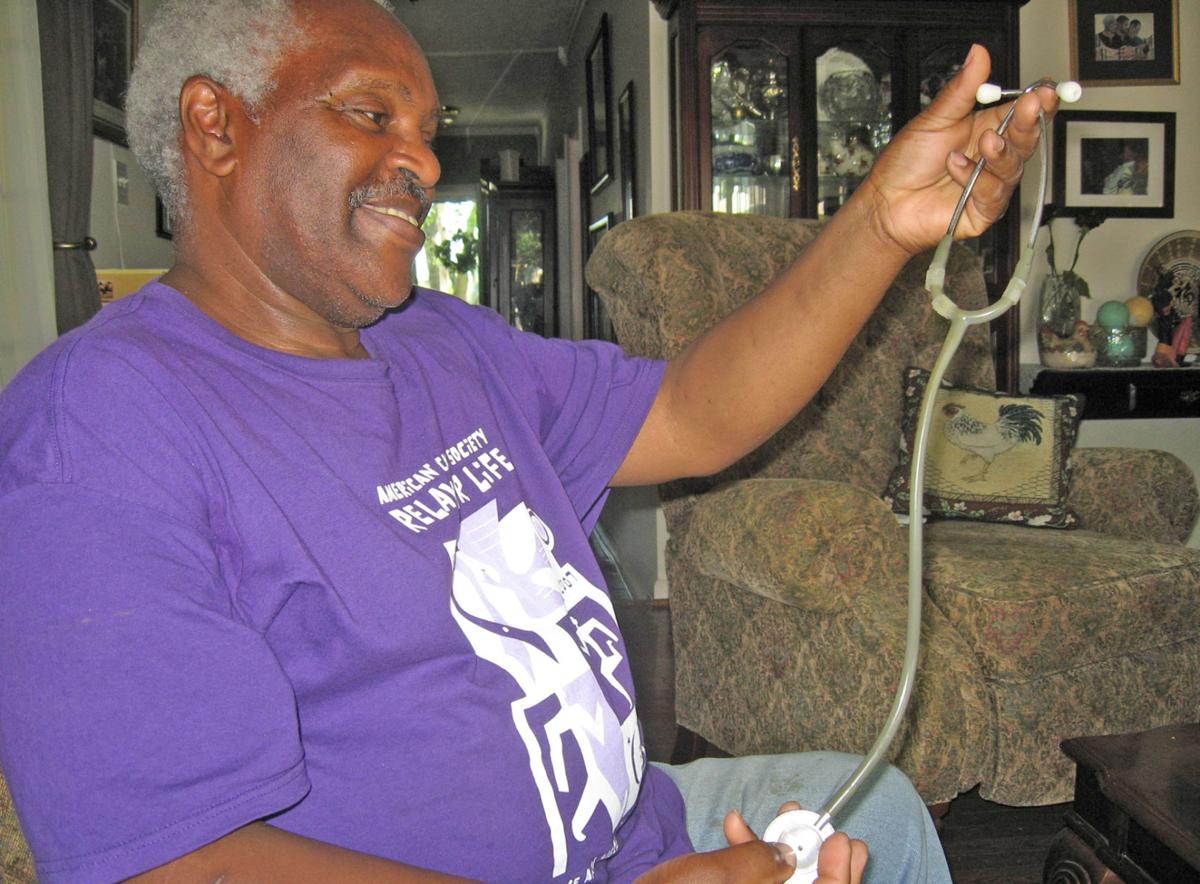 Bobby Wilson, in 2011, talks about his long career as a nurse. 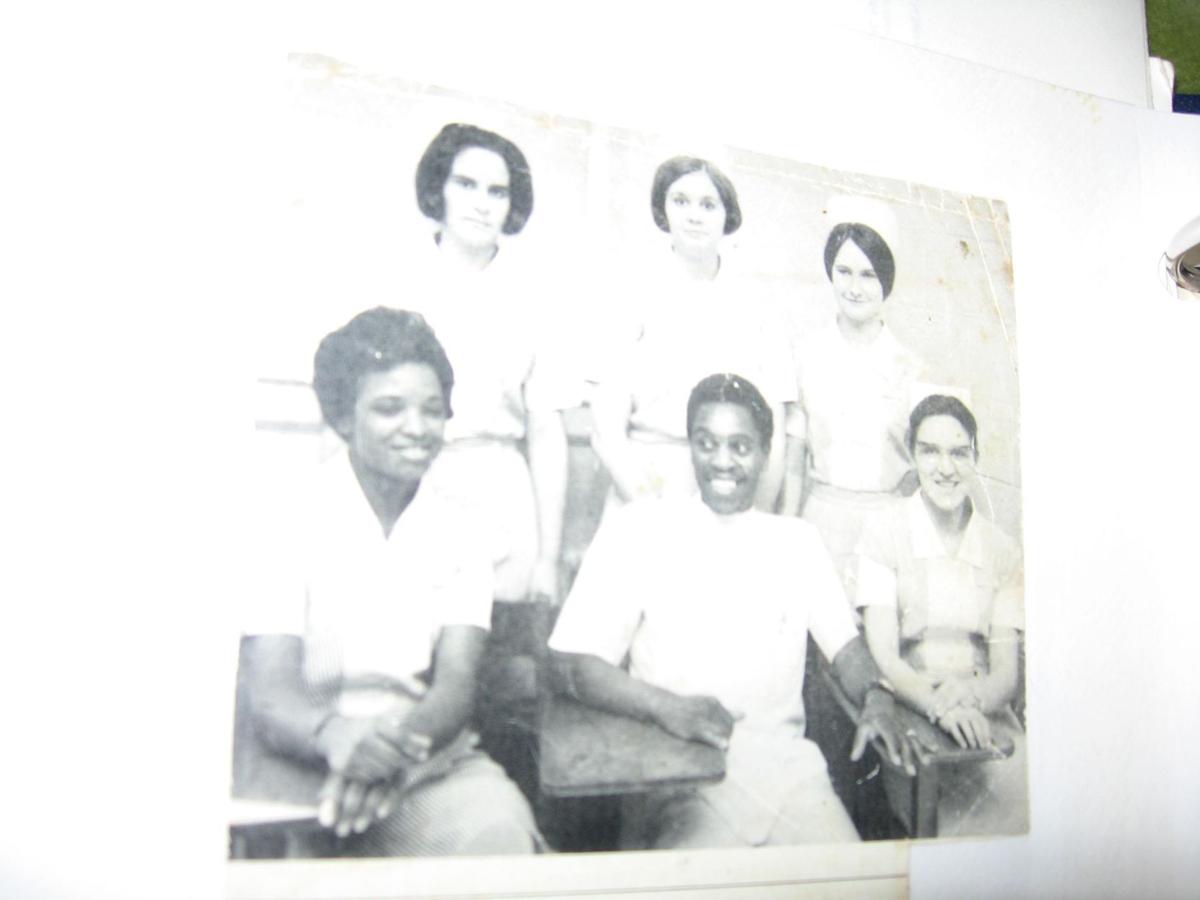 Bobby Wilson, front center, in the late 1960s after graduating from pre-clinical classes at Piedmont Vocational School in Culpeper. 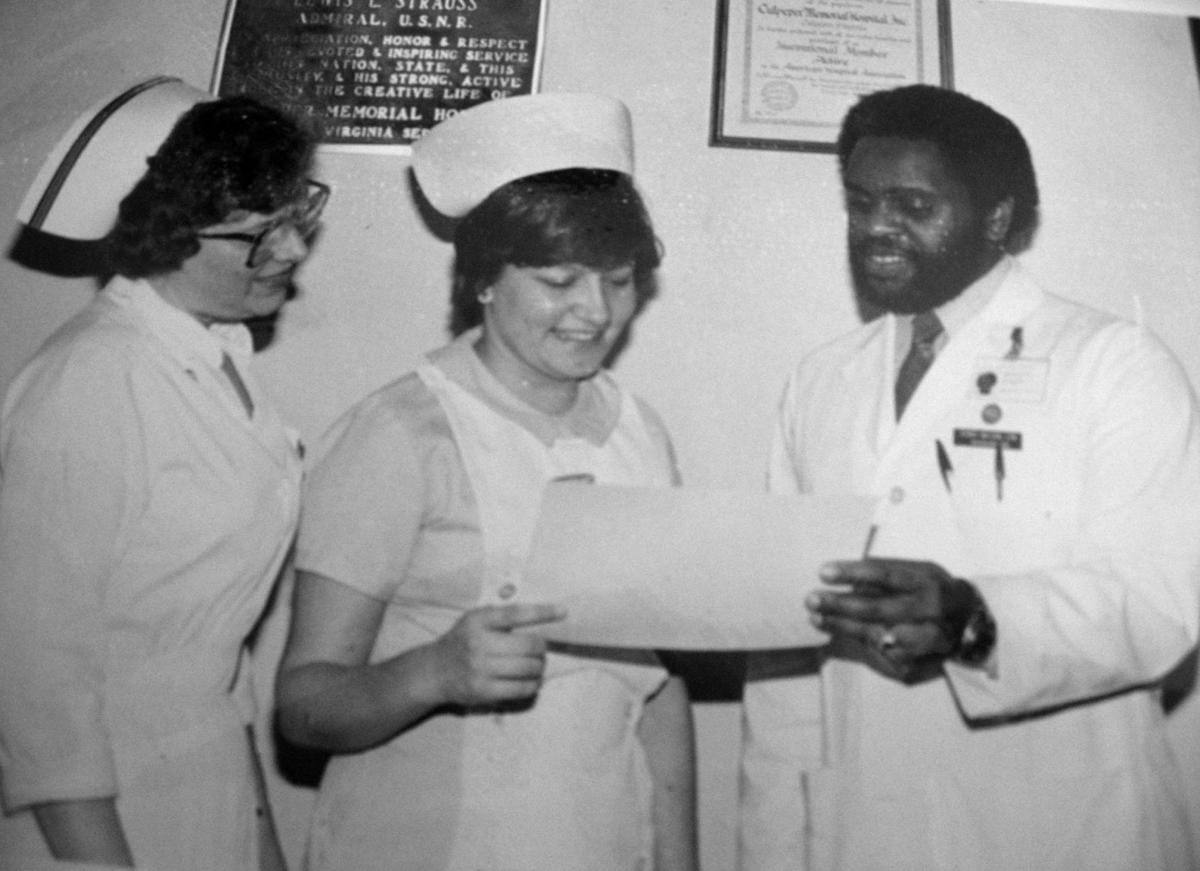 A pioneer of medical care who treated all of his patients with the same kindness, Culpeper native Robert “Bobby” Lee Wilson passed away Jan. 5 at University of Virginia Medical Center in Charlottesville. He was 76.

Bobby Wilson was the first male nurse to ever work in the Culpeper hospital and helped set the standard for care.

He started his lengthy career at the Sunset Lane facility in 1965 working in housekeeping, but found he would much rather care and interact with patients. With encouragement from friends and family, Wilson completed his clinical trials at University of Virginia Medical Center in Charlottesville.

He went on to work as a licensed practical nurse from 1970 until his retirement in 2010. During that time, Wilson worked in every department in the Culpeper medical center.

“I remember being on break and being paged back to the ER for a delivery,” he recalled in a 2015 interview with the Culpeper Star-Exponent of his early days in the Culpeper hospital. “As soon as I got to the door, I caught that baby. I didn’t even have a chance to put on my gloves.”

“I did everything as an LPN,” added Wilson. “From administering medications and drawing blood to starting IVs to delivering babies—you basically did everything back then.”

He told former CSE reporter Rhonda Simmons, who became a friend, it was fun being the only male nurse, adding, “Those women looked out for me.”

A 1965 graduate of segregated George Washington Carver Regional High School, he returned to the school a few years after it closed with integration and became a technical education facility. Here, Wilson completed his pre-clinical classes with all other female classmates. Later, Wilson helped save the historic school, according to Col. Samuel Glasker, who graduated with the first class from Carver in 1952.

The two met in 1988 when Wilson gathered with a handful of other former students to create an alumni association to keep the building from being sold. Wilson also led the effort to have the site listed on the historic register and establish a scholarship fund that still facilitates higher education for local students, Glasker said.

“As you look at the school today and the museum today, you can really say that they are the cornerstones of Bobby Wilson,” he said in a phone call Tuesday evening. “They are 80 percent of his course and his direction.”

“He was always at the positive of things,” he said. “He could always look at where you were from an obstacle—how could we move from somewhere else to get to an improvement?”

“We continue to stand upon his broad shoulders, as well as others of his generation, that make it easier to exist in spaces that were previously inaccessible to use,” Harris said.

A longtime member of the Culpeper Hospital Auxiliary that recently disbanded due to COVID, Joan Proctor knew and worked with Wilson for many years.

“He had a smile that lit up the room no matter where you saw him. Kind to not only his patients but his fellow workers as well. He loved his family and his job there at the hospital,” she said.

Most everyone who lived in Culpeper came to know Wilson and he counted many of them his friends, recalled his younger sister, Cindy Puller.

“He was such a big thing in Culpeper,” she said in a phone call Tuesday. “He was like an icon.”

Wilson worked at the hospital before it was fully integrated, when the facility had separate dining rooms. One time, a patient didn’t want to be touched by Wilson because he was Black. So he went and got the registered nurse he was training.

“She told the patient, ‘I’m here to start your IV, but I’ll tell you what (Wilson) is the best. But if you don’t want him to do it, I’ll be glad to stick you 10 times because he’s training me,” Wilson said in the 2015 interview.

The patient quickly changed his mind and accepted the nursing care.

“I just played it cool,” Wilson said. “I just laughed it off. You just dealt with it.”

His sister said Wilson treated everyone with the same courtesy and respect regardless of the circumstance, or how he was treated in return.

“In his eyes, he was just doing God’s work. He was just doing what his life’s passion was at the end of day,” Puller said. “People might not do good by you, but he always did good by others. He was just really big on character—he had that high standard for himself.”

In 1985, the Virginia Licensed Practical Nurse Association selected Wilson as its Nurse of the Year for outstanding accomplishments in his field, recalled his great-niece, Zaneta Puller.

In 1993, former Virginia Gov. Doug Wilder appointed Wilson to the Virginia Board of Nursing, and Gov. George Allen reappointed him to a second term.

“He was someone that cared so much about the community and nursing,” said Zaneta Puller in a phone call. “His biggest thing was treating everyone with the same kindness.”

In his family, Wilson was the favorite uncle.

“Always a good time, such a vibrant personality,” said his great-niece.

Everyone Wilson met along the way would become a friend, she added. Everyone wanted to hear his story, Zaneta Puller said.

“He had such a great journey and so many experiences in his life, and his impact on everybody,” she said.

Wilson lived with and battled cancer for more than 20 years, said his sister, and had been sick for awhile. He entered the hospital in December and never came home after suffering heart failure, she said.

“He was so ready to go home,” said Cindy Puller. “There was nothing more he loved than an evening at home.”

The night he died with his two sisters by his side, there was not a dry eye in the ICU, she added.

“He just touched so many people,” Cindy Puller said.

“We are saddened to hear about the loss of a Culpeper Hospital legend. During his time at our hospital, Bobby served the members of our community with quality care and compassion, a value our team members still hold true today. We are proud to have had Bobby work within our walls, and we wish his family peace and happiness.”

A funeral for Wilson will be held Saturday at Culpeper Baptist Church. Viewing will be at 2 p.m. and the service at 3 p.m.

NEW YORK (AP) — Hospitals aren't usually incubators of great music, but in the case of English indie-pop band Glass Animals, one member's medical emergency led to a breakout album and a Grammy nomination.

In the past week for the five counties, 45 people were hospitalized for the infectious respiratory virus now rapidly spreading as omicron.

Home COVID tests to be covered by insurers starting Saturday

Starting Saturday, private health insurers will be required to cover up to eight home COVID-19 tests per month for people on their plans.

Board of Supervisors vote 6-1 to accept $549,094 to implement program intended to help keep repeat offenders out of the justice system and jail.

Here are 25 ways to stay warm this winter — with or without indoor heating — that won't break the bank.

A temporary falloff in the number of gun deaths is over; a study shows a link between a COVID-19 vaccination and a change in menstrual cycle length; and more health news.

How much candy do Americans eat in a year?

A healthy diet can include some candy. But if you eat too much, it can interfere with your appetite for the stuff your body actually needs.

Bobby Wilson upon his retirement in 2010.

Bobby Wilson worked at the Culpeper hospital for four decades, retiring in 2010.

Bobby Wilson, in 2011, talks about his long career as a nurse.

Bobby Wilson, front center, in the late 1960s after graduating from pre-clinical classes at Piedmont Vocational School in Culpeper.