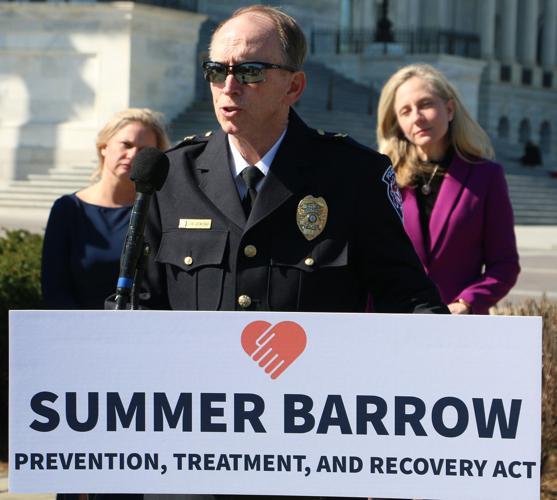 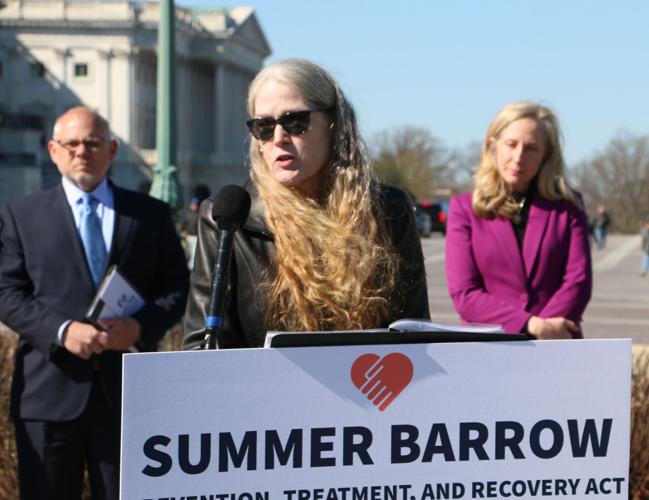 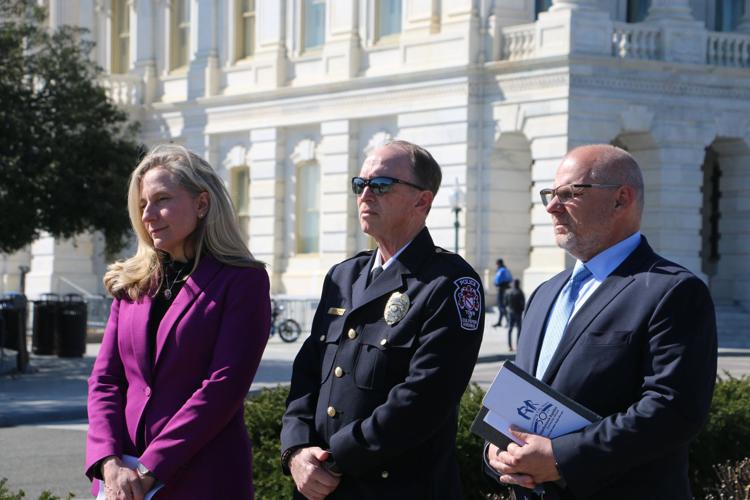 Culpeper leaders stood with the local congresswoman this week at the U.S. Capitol in introducing legislation that would provide $900 million for a long-term community response to an alarming rise in fentanyl and other opiate deaths.

“Culpeper is a small community about an hour and a half south, yet I can tell you we face almost daily the effects of opiate use and drugs and death,” Chief Jenkins said at the press conference March 29.

“Our officers are on the front lines almost every single day responding to an emergency call where someone has overdosed.”

Officers have saved many lives using Narcan to revive people, Jenkins said, adding he hopes it can give someone hope that they can get the right treatment that they need.

“There’s always hope when there’s life,” he said. The last two years of the COVID crisis took focus off the opiate epidemic.

“It is back again and it’s full force,” the police chief. He said the Summer Barrow legislation would save lives.

The legislation is named in memory of Virginian Summer Barrow, who died in January 2020 from a fentanyl overdose. Her mother, Carey Colvin, is now advocating on her behalf. Her daughter loved music, animals and her family, Colvin said at the press conference.

“She did not think as a child, oh I want to grow up to be an addict—nobody does,” she said.

Barrow broke her neck in a car accident and was prescribed an opiate for pain, Colvin said. When the pills ran out, she turned to heroin.

“She told me, when you use heroin, you don’t care about anything else—if you eat, if you work, bathe or sleep. You just want more,” Colvin said.

She kept telling her daughter her nine lives were going to run out, noting Barrow struggled with addiction for many years. Lack of funds and transportation hindered her ability to access treatment.

“Summer did not mean to die. She simply wanted to get high and go about her day,” Colvin said.

“The aftermath of her addiction has left us in a landscape of sadness, the loneliest place we have ever been. The hole she left in our life is cavernous and will never be filled,” Colvin said, adding she hoped the legislation in her daughter’s name would spare some other family what they are going through.

If Summer could talk, she would say, “Don’t let this happen to you. Please get help,” Colvin said.

The Culpeper five-county area saw 47 fatal overdoses in the first nine month of 2021, LaGraffe said at the press conference in Washington.

“We are a community of suburban and rural neighborhoods in the beautiful farmland, rolling hills and small towns at the foot of the Blue Ridge Mountains,” he said.

Yet the region has more than a 30 percent higher adult suicide rate than the national and state average, LaGraffe said.

His agency opened the SEE Recovery Center this past summer on the ideal of eliminating barriers to support and services for mental health and substance abuse while reducing the stigma. The center is peer-led, cost-effective and responsive to emergent community needs, LaGraffe said, for example, distribution of fentanyl test strips.

Open a short time, the recovery center is getting an estimated 1,000 visits per month.

According to the CDC, between October 2020 and October 2021 nearly 106,000 Americans died by drug overdose, a record for such deaths in a single year. Fatal overdoses in Virginia over the same time period increased a record 18 percent.

If passed, this legislation will provide needed funding for overdose prevention, first responder training, co-prescribing programs, along with pregnant and postpartum women substance use disorder treatment.

Culpeper Police Major Chris Settle attended with the chief to advocate on matters that are affecting the citizens of Culpeper, Settle said, including mental health. These issues are impacting Culpeper law enforcement daily and have a direct nexus to crime, Settle said.

“The addiction crisis touches all of our communities—whether urban, suburban, or rural. Right now, we need to recognize that there are two pandemics happening in our country; even as we’re making significant progress in the fight against COVID-19, the opioid and substance use disorder crisis continues to worsen. Going forward, we must focus on strengthening access to treatment and recovery programs,” said Spanberger. “

While there is a shortage of substance use disorder and mental health services across the country, rural communities face unique challenges in meeting their needs, Rep Armstrong said in a statement.

American Substance Abuse & Mental Health Administration grant programs have helped state, local, and tribal governments in North Dakota provide care to those most in need and he said he proud to support reauthorization.

“Homelessness, mental health, and substance abuse are significant issues for South Florida, and Congress must confront these issues and the challenges they present,” said Salazar.

“Working on the Chicago PD, I saw heartbreaking overdoses that tore apart families. Since then, the opioid crisis has grown and worsened, especially during the COVID-19 pandemic,” said O’Halleran. “

The local hospital had 38.5 percent occupancy for adult in-patient beds as of July 29, ICU beds were 77 percent occupied.

US to declare monkeypox a public health emergency

The U.S. will declare a public health emergency to bolster the federal response to the outbreak of monkeypox that already has infected more than 6,600 Americans, according to AP sources

Health officials recommend that anyone infected with the coronavirus isolate for at least five days. But for many, that timeline is overly optimistic.

Could this type of cheese protect your bones? Plus, global warming may mean unfit kids, and more health news

Enjoying just two slices of a certain type of cheese every day may help stave off osteoporosis, a small Norwegian study suggests. Get that and more recent health news here:

Japanese Prime Minister Fumio Kishida has reshuffled his Cabinet in a bid to distance his administration from the conservative Unification Church over its ties to the assassinated leader Shinzo Abe and senior ruling party members. The reshuffle was the second in just 10 months since Kishida took office. He says it's important to gain people’s trust and that the new Cabinet included only those who agreed to strictly review their ties to the church and help the victims of the allegedly fraudulent religious businesses. Abe’s assassination on July 8 and its impact on politics increased uncertainty as public support for Kishida’s Cabinet plunged. Seven ministers were removed including Defense Minister Nobuo Kishi, Abe’s younger brother. The church leader criticized Kishida's purge.

500K American men get vasectomies every year. A specialist explains the easy and reversible procedure

As more younger, single men ask for one following the Supreme Court abortion decision, a urologist explains what to expect with a vasectomy.

Some South Carolina lawmakers who oppose abortion are being cautious when it comes to tightening the state's already restrictive laws even further. The U.S. Supreme Court overturned Roe v. Wade in June, paving the way for states to enact total bans if they choose to do so. South Carolina currently has a law banning abortion after cardiac activity is detected, at about six weeks of pregnancy. Lawmakers called a special session after the high court's decision in June to discuss the issue. But some are hesitating after seeing voters in conservative Kansas overwhelmingly reject a measure that would allow the legislature to tighten restrictions or enact a total ban.

COVID-19 spread in Culpeper and Orange counties is medium

A new philanthropic project hopes to invest $100 million in up to 10 countries mostly in Africa by 2030 to support up to 200,000 community health workers. These workers serve as a critical bridge to treatment for people with limited access to medical care. The Skoll Foundation and The Johnson & Johnson Foundation announced Monday that they donated $25 million to the initiative. The Global Fund to Fight AIDS, TB and Malaria will oversee the project.

The best foods to help you sleep

Avoid these two common car features to save money on fuel

Avoid these two common car features to save money on fuel