A rendering shows how a new fieldhouse approved for construction at the Culpeper Sports Complex will look. 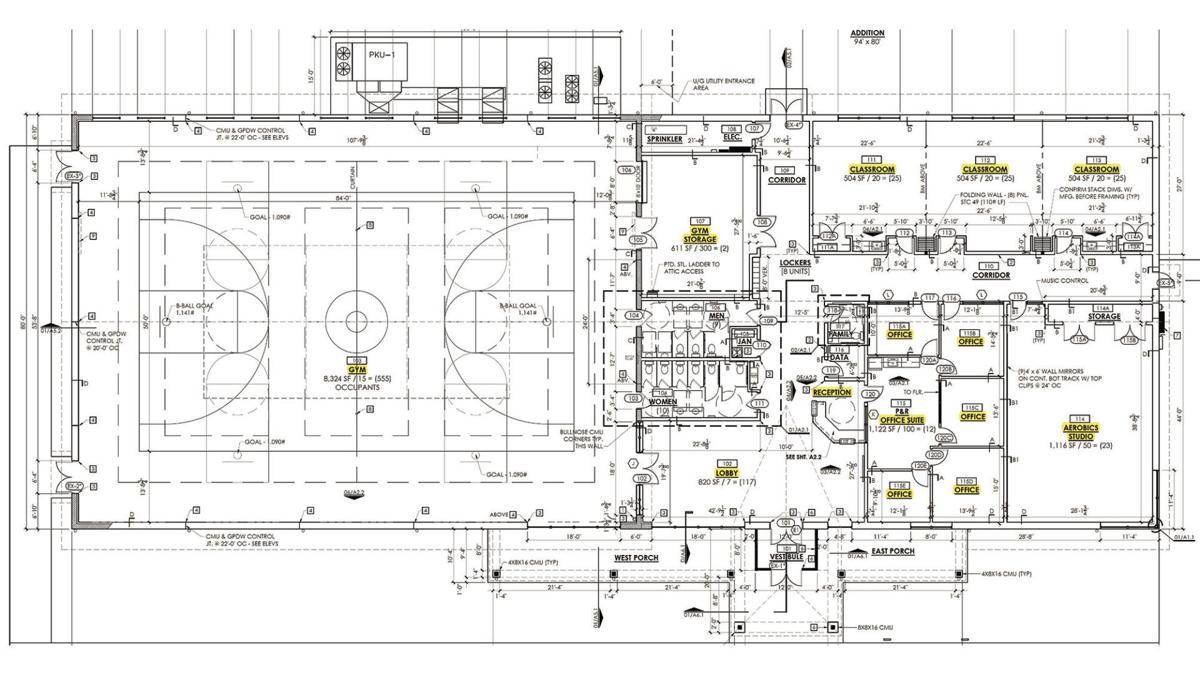 Architectural drawing for the Culpeper County Fieldhouse project at the Sports Complex.

The county on Tuesday awarded $8 million in construction contracts to the same low-bidding company for two projects that will serve families and youth in Culpeper.

A 17,000-square-foot masonry construction fieldhouse at Culpeper County Sports Complex will have a full sized gym with basketball court, classrooms and an aerobics studio, Environmental Services Director Paul Howard told the board of supervisors unanimously supporting the project. It is slated to open in the fall 2022.

Gulf Seaboard General Contractors won the $3.9 million contract with the low bid of 11 submitted. The board at its meeting executed the 16-page contract with the Ashland-based company. Supervisor Tom Underwood made the motion to approve.

The fieldhouse will house half-dozen offices for Culpeper County Parks & Recreation Dept. led by Director Andrew Hardy, in an area behind reception, as shown on building plans. The county department will develop programs and offerings in the facility.

“In all my tenure, I’ve never had this much interest or so many bids that were so close,” Howard said of firms bidding on the project.

Board Chairman Gary Deal has long advocated for and been involved in youth sports in the community. Tuesday was a happy day for him.

In a statement later on Tuesday, he gave kudos to Hardy and his staff, the Board of Supervisors for its unanimous vote to move the fieldhouse forward and county administrator John Egertson for all his work on it.

First the Culpeper Technical Education Center, now a recreation center, Deal said, “Culpeper County government is on a roll and certainly delivering amenities that will serve our community for decades to come!”

Supervisor Jack Frazier told Howard, in addition, that the $2 million sports field lighting project needed to be part of the fieldhouse project. Egertson said they were separate projects and that the new lights for the fields were “ready to go” and work quotes had been received.

The administrator said the lighting project would start soon, anticipated to be operational by the spring or summer of 2022.

Gulf Seaport also submitted the low bid for the $3.5 million federally funded construction of a new Early HeadStart school on the Galbreath-Marshall campus along Old Fredericksburg Road. The nearly 11,000-square-foot, one-story masonry school will serve at least 80 of the county’s littlest citizens, infants and toddlers younger than 3 from low-income families.

The new school will have 10 classrooms, according to Howard, as well as a kitchen and laundry. There was a lot of interest in this project, with 10 bids received, he said, and very close estimates among competing firms.

The federal government, in addition to paying for the new preschool, will provide operational funding for up to five years, Howard said. The campus also houses HeadStart, serving many local children aged 3-5 as part of the program run by Culpeper Human Services.

Frazier wanted to know who funds Early HeadStart after the five years is up. Does the federal grant cover things like utilities at the school? he asked. Culpeper Human Services Director Lisa Peacock replied yes, that separate grants will cover construction and operation.

She said the county has always received financial support from Washington for the school.

“I do not foresee the federal government not continuing to fund HeadStart,” Peacock said. “I don’t ever foresee coming to the Board of Supervisors and asking for funding for operations.”

Frazier commented, “Well, we really never know what will happen,” in regards to the federal funding stream to localities.

Even if the federal government pulled funding, she said, the county would run the program as private pay, like the agency’s existing Kid Central childcare.

“Families are in desperate need of childcare,” Peacock said. “We could fill those rooms.”

Frazier made a motion to approve the project, seconded by East Fairfax Supervisor Kathy Campbell, in whose district HeadStart operates.

In other news, the board approved as part of its consent agenda spending $1.15 million to purchase the old town hall building at 118 W. Davis St. from the town.

Have you ever seen a Taj Mahal haircut?

10 features people look for when buying a car

10 features people look for when buying a car

Why Americans are changing their home decor

Why Americans are changing their home decor

Culpeper Wellness broke ground in August on the $6 million center going up on its campus near the 29 interchange just south of town.

A rendering shows how a new fieldhouse approved for construction at the Culpeper Sports Complex will look.

Architectural drawing for the Culpeper County Fieldhouse project at the Sports Complex.