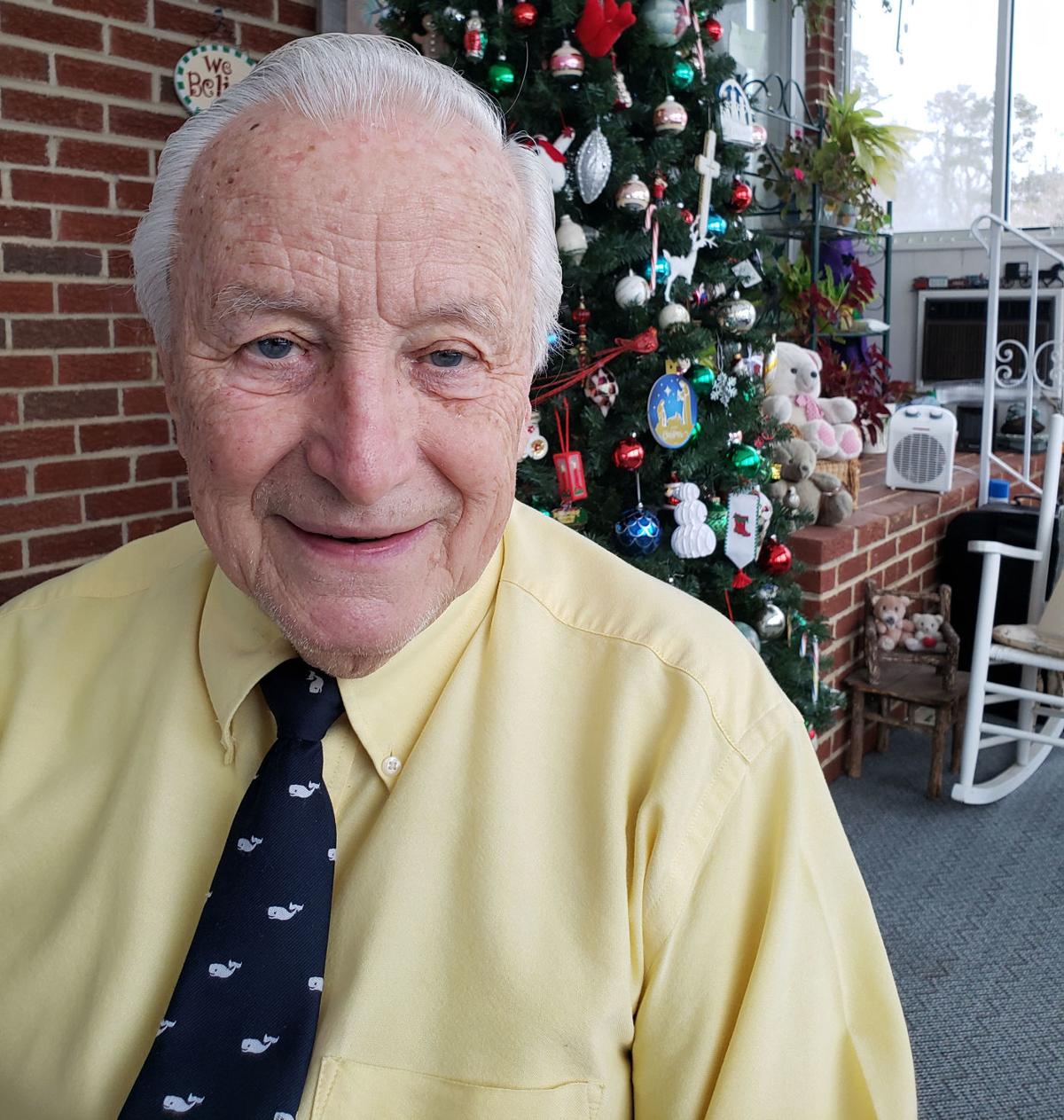 Don Gerhart, The Singing Grandpa, recently auditioned for the 2021 season of ‘America’s Got Talent.’ 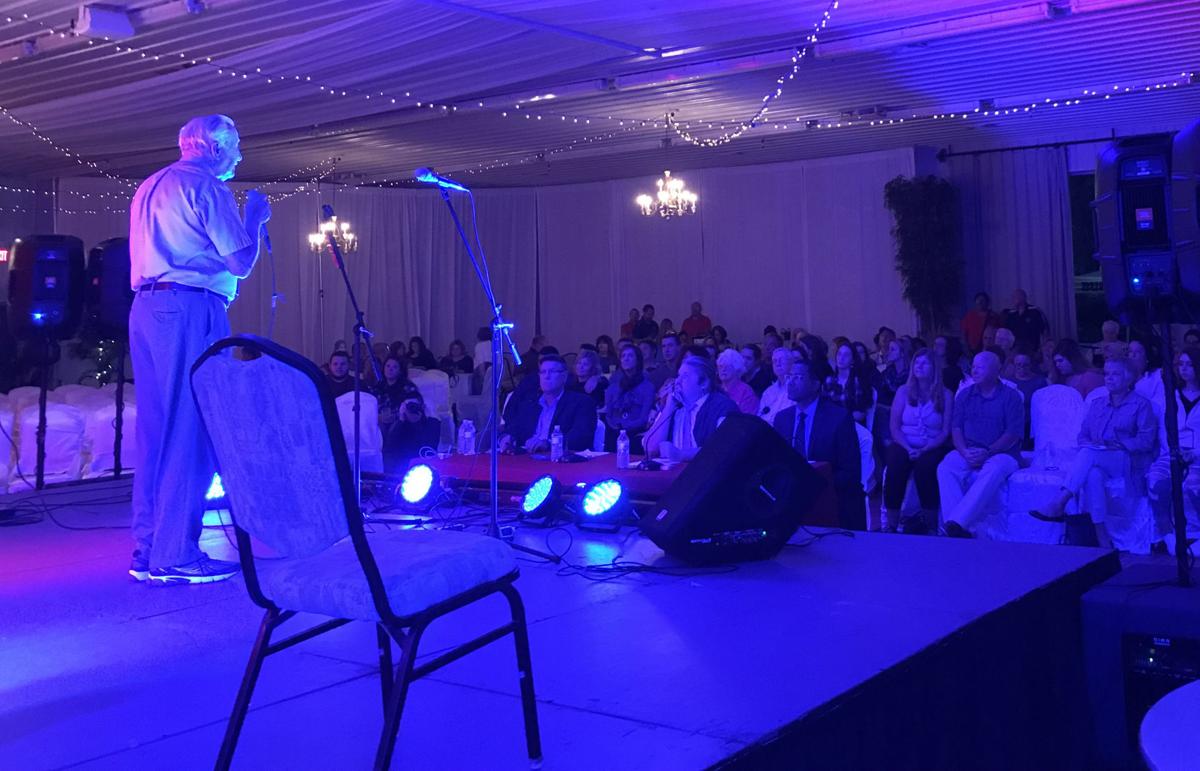 Madison County singer Don Gerhart, The Singing Grandpa, opens the 2018 Culpeper Has Talent competition at the Inn at Kelly’s Ford.

The pandemic put a dent in Don Gerhart’s gigs as the so-called ‘Singing Grandpa’ of Madison County saw his regular performance venues in local nursing homes, churches and other community sites curtailed to public access so as to stem spread of the infectious coronavirus.

But in spite 2020’s local and worldwide absence of in-person entertainment—and the loss of many good artists in a year marked by sickness—there may be a bright spot with a chance on the national stage in 2021 for this 88-year-old tenor.

Gerhart, of Radiant, sang his last love song in public—at least for a while—in March of 2020 at The Culpeper retirement village. He also wooed residents of Culpeper Health & Rehab at a Valentine’s Day event in 2020—when everything abruptly closed.

“It was so much fun and then boom! It came to a screeching halt—churches shut down, all the nursing homes, you can’t get in even if you have a relative, no more open mic nights at the Catholic Church,” Gerhart said in a recent phone conversation.

Scant 2020 gigs included an Elvis impersonation act in October for his birthday at the Culpeper church, and singing hymns for his church held outside on a parishioner’s lawn.

“Oh, God, yes, I am missing it,” said Gerhart, a great-grandfather, reminiscing about getting his start singing just a few short years ago at the age of 83.

As previously featured, his wife of 60 years, Patricia, was living with severe Alzheimer’s at Mountain View Nursing Home when Gerhart got the singing bug.

Retired from Rappahannock Electrical Cooperative and devoted to his wife, who died in 2016, he spent many hours with her at the nursing home and came to know and grow close to the musically-inclined Mennonite missionaries completing Christian service in the facility.

Gerhart sang for the first time in public in 2013 at the nursing home with a Mennonite youth, “Oh, Holy Night.” Though the performance was not perfect, it touched the roommate of his wife in a special way.

It was just the fuel Gerhart needed to keep on singing, and that’s what he has done, including in 2018 at Culpeper Has Talent held that year at the Inn at Kelly’s Ford. It was a highlight for him and so was performing for 300 at a resort in Vermont that same year as part of the Grange national convention.

Gerhart is still chasing the dream, and in spite of the continued pandemic, recently submitted a video audition to “America’s Got Talent.”

“My hope with AGT is I am 88 years old, I can sing … I have that story with my wife. Why do you continue doing it? I do it in honor and memory of my wife and to inspire other people who have these dreams to go ahead with them,” he said.

Gerhart will hear this spring if he’s been selected to be on the show, for which virtual auditions are now being reviewed in preparation for the 2021 season starting in May.

For his submission, The Singing Grandpa recorded Louie Armstrong’s “It’s a Wonderful Life” and “Only Love” by Dutch violinist and showman Andre Rieu. Another of Gerhart’s favorite covers is “Edelweiss,” popularized by Christopher Plummer in “The Sound of Music.”

It would be a dream to appear on AGT, the local singer said of the show created and judged by Simon Cowell along with other celebrities.

“For me to get far enough, one time to get on that stage in front of the judges and a real audience—not virtual although this year it may be virtual—what a thrill that would be if the judges said, ‘For 88, that was very well done. We really appreciate you being here, I am going to vote no.’ It would still be a dream,” Gerhart said.

It’s been really tough not being able to sing in public for the past year, he added.

“I miss it so much,” Gerhart said. He’s practicing for AGT nonetheless. “I go in my sunroom, where I have my stuff set up and will sing for an hour, hour and a half, just keeping my voice strong.”

Check out The Singing Grandpa Don Gerhart on YouTube:

“Peace in the Valley for Me”

“What a Wonderful World”

Is a retail credit card worth it?

The role household items should play in your life

The role household items should play in your life

PennyWise Episode 5: How to Prioritize Your Debt Payments

PennyWise Episode 5: How to Prioritize Your Debt Payments

The cities with the highest (and lowest) rental vacancy rates

The pandemic has disrupted many aspects of life, and some of the most significant shifts have occurred in housing. A combination of factors could lead to high activity in some parts of the rental market while creating uncertainty or vulnerability in others.

8 ways to fall back asleep after waking in the night

Here are eight tips from sleep and anxiety experts on how to shut down that whirling dervish of a brain and coax your body back into much-needed sleep.

What should you get your sweetie for Valentine's Day?

Roses? Chocolate? A homemade gift? Answer some questions, and get started on a plan!

The French bulldog is an ideal canine companion. But its popularity makes it a frequent target for theft, as happened with two of Lady Gaga's dogs.

Jasmin from Denver is obsessed with beanie babies, a line of tiny stuffed toy that was very popular in the 90s. Now some of them are so valuable they can sell for tens of thousands of dollars.

What it's like to live on Italy's COVID-free islands

While the virus has struck far and wide, a lucky few remote locations remain coronavirus-free a year after the virus halted much of the world.

How to prevent indoor rodent invasions

The best way to deal with rodent problems is to prevent rats and mice from ever getting inside in the first place. That can be easier said than done.

While you can always head to your favorite cafe to partake in this particular soup, with this copycat Panera Bread recipe you can have bowls and bowls of broccoli cheddar soup at home in just about one hour.

Don Gerhart, The Singing Grandpa, recently auditioned for the 2021 season of ‘America’s Got Talent.’

Madison County singer Don Gerhart, The Singing Grandpa, opens the 2018 Culpeper Has Talent competition at the Inn at Kelly’s Ford.