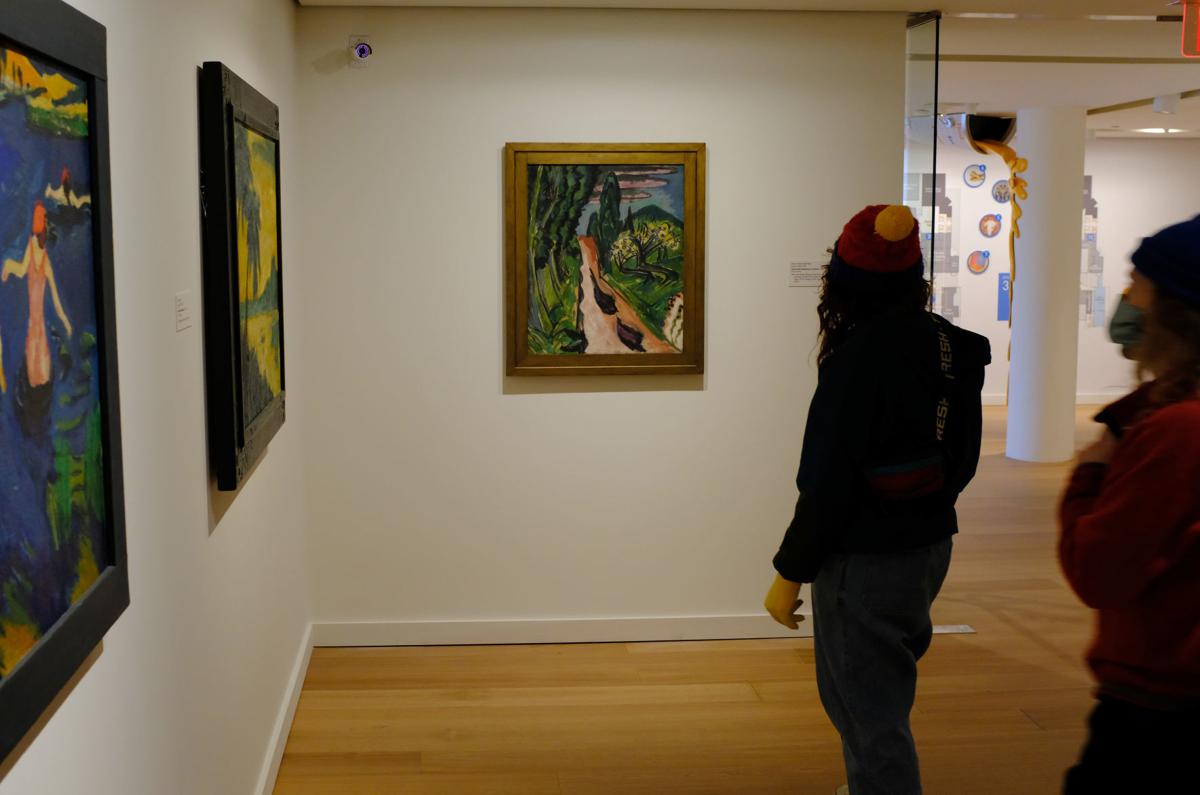 Ernst Ludwig Kirchner’s ‘Taunus Road’ (center), which was thought to be lost or stolen by Nazis, is now on display in the German Expressionist Gallery at the Virginia Museum of Fine Arts in Richmond. 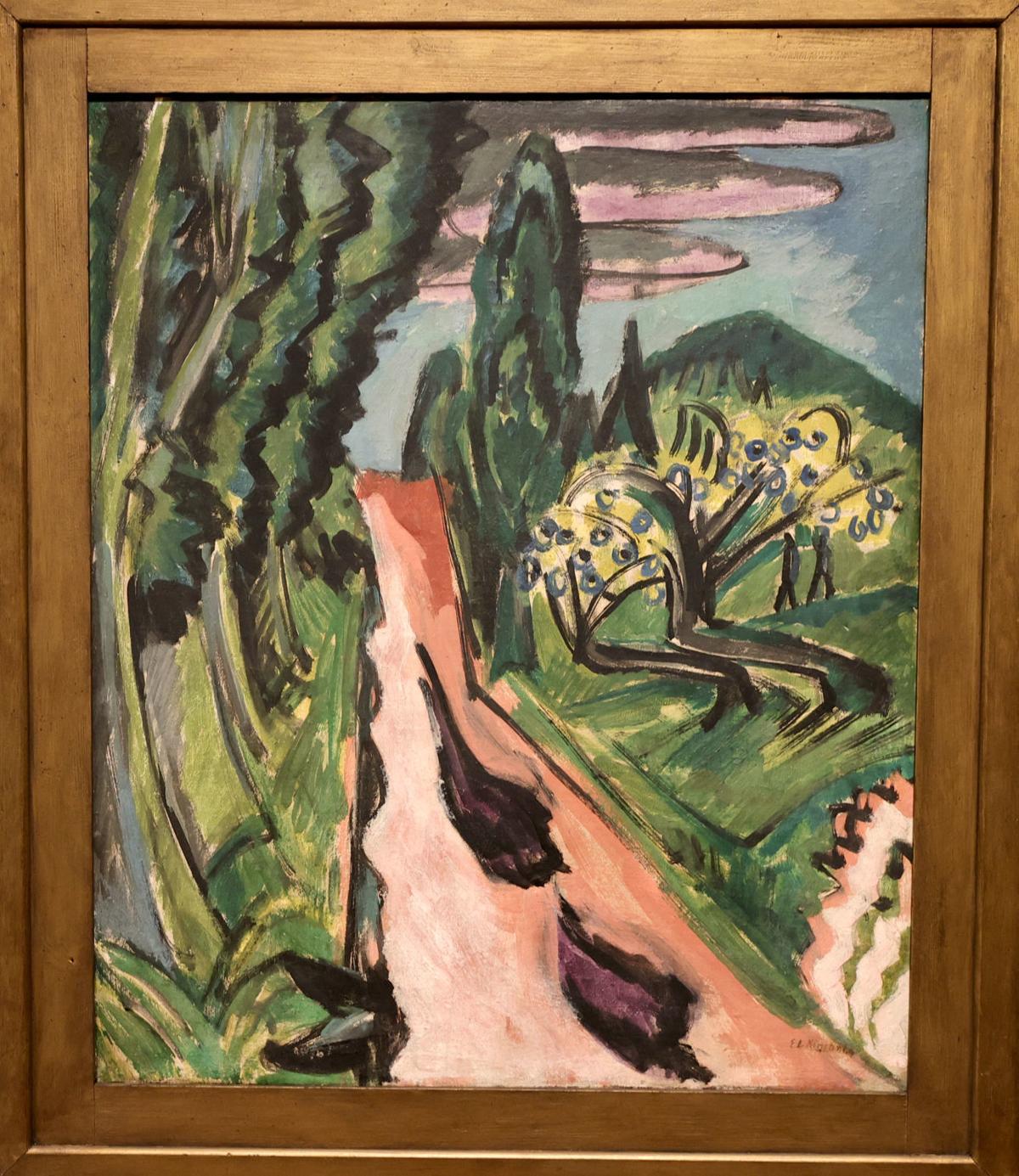 Ernst Ludwig Kirchner’s ‘Taunus Road’ was completed in 1916. The restituted painting by the German Expressionist rejoins the Ludwig and Rosy Fischer Collection.

The Virginia Museum of Fine Arts has acquired a painting by German expressionist Ernst Ludwig Kirchner, which was presumed lost or stolen by the Nazis and was recently returned to the original owners.

The oil painting, completed in 1916, is titled “Taunus Road” or “Autostrasse im Taunus” in German.

Last year, a private collector in Germany was preparing to sell the painting at auction. But an attorney hired by some longtime VMFA benefactors, who has been on the hunt for the family’s lost art, was able to halt the sale and return the painting to the family.

The benefactors, Ludwig and Rosy Fischer, were art collectors in Frankfurt, Germany. Between 1905 and 1922, they built one of the most impressive collections of German Expressionist art of the time, with a special emphasis on the artists of the Die Brücke movement.

Their sons, Ernst and Max, inherited the collection of approximately 500 works in 1926. When the Nazis began to rise to power, Ernst and his wife, Anne, fled to the United States in 1934, bringing with them the more than 200 pieces they owned. They lived in Rochester, N.Y., for a year, then settled in Richmond, where Ernst took a position at the Medical College of Virginia, which is now VCU Health System.

Max, a journalist, left the following year, but he was able to take only a few works out of Germany, and the remainder were presumed lost or stolen. He died in New York in 1954.

In 2009 after Anne’s death, the museum acquired Ernst’s portion of the collection through a gift-purchase agreement.

But most of Max’s portion was long thought lost.

More than a decade ago, the Fischer heirs—Ernst and Anne’s children, Eva Fischer Marx and George Fischer—hired a New York attorney who specializes in finding lost art.

“Taunus Road” is the second painting that has been recovered from the lost portion of Max’s half of the collection and returned to the Fischer’s grandchildren.

In 2016, Kirchner’s painting “Sand Hills in Grünau” was returned by the Museum of Modern Art (MoMA) in New York to the Fischer family as the result of a Nazi-era restitution case and acquired by the VMFA through a similar gift-purchase arrangement.

After that painting was returned to the family, the family said any future recovered works from Max Fischer’s portion of the family collection would go to the VMFA.

“Taunus Road” joins “Sand Hills in Grünau” on view in the German Expressionist Gallery at the VMFA.

“Having grown up in a home surrounded by these vivid works of art, it was a natural decision to send any restituted works to VMFA, to rejoin the Ludwig and Rosy Fischer Collection at the museum,” said Eva Marx, granddaughter of Ernst Fischer. “By reuniting this work with the rest of the collection, we honor our grandparents’ vision and our parents’ dedication to sharing these works with the public.”

“Taunus Road” joins other well-known Kirchner works in the VMFA’s collection, such as “Six Dancers” and “Two Streetwalkers.”

Kirchner was a leader and founding member of the Die Brücke group, formed in 1905. These artists looked at the industrialization of the early 20th century with fascination and despair. Responding to the changing world around them, they created art characterized by loose brushstrokes and bold colors. Much of this art was deemed “degenerate art” after Hitler came to power.

While many of the Die Brücke artists painted urban scenes, they also escaped to the country to paint rural scenes to get away from the anxiety and pressure of city life.

According to the VMFA, “Taunus Road” provides a strong example of Kirchner’s vibrant landscapes produced between 1915 and 1918, a period scholars have described as Kirchner’s “crisis” years. He painted the scene in the midst of World War I, during his stay at the sanatorium in Königstein im Taunus, a community in the Taunus mountains north of Frankfurt where, after granted leave from the military, he received treatment following a nervous breakdown.

“Adding this work to the Ludwig and Rosy Fischer Collection helps us to tell a fuller story of the ways in which Hitler’s rise to power impacted the Fischer family and their collection. Displaying ‘Taunus Road’ alongside ‘Sand Hills’ in the German Expressionist Gallery adds significantly to our understanding of Ludwig and Rosy Fischers’ vision as important early collectors of Kirchner’s work in particular,” said Sarah Eckhardt, associate curator of modern and contemporary art at the VMFA.

She said the museum did not have many landscapes by Kirchner in the collection.

“We had portraits by and large. It’s interesting to see them all together,” she said. “It’s such a rare story, for this family to be so committed to the museum and having this work be accessible to the general public,” she added.

The VMFA, at 200 N. Arthur Ashe Blvd., is working on an exhibition for 2024 or 2025 that will focus on the Fischer Collection and German Expressionist art.

What household items need cleaning everyday and what can wait

How much spending money should parents give their college student?

How much spending money should parents give their college student?

How to perk up when you're in an afternoon slump

How to perk up when you're in an afternoon slump

Local healthcare and hospital workers are bearing and feeling the stress in treating the mostly unvaccinated patients as the more contagious Delta variant spreads.

September is trending much like August, as 259 new COVID-19 cases have been reported to the Virginia Department of Health through the first tw…

70-year-old woman has walked every street in Waynesboro

How to make a pumpkin spice latte at home

You can create cozy seasoning in your kitchen by combining ingredients like ground cinnamon, ginger, nutmeg, cloves and salt.

These dog breeds have the lowest working and obedience intelligence.

Time slots added to accommodate a growing list of clients.

Fall means more deer on the road: 4 ways time of day, month and year raise your risk of crashes

Avoiding hitting deer on the road is as much about when you drive as where. An animal behavior expert explains why.

Ernst Ludwig Kirchner’s ‘Taunus Road’ (center), which was thought to be lost or stolen by Nazis, is now on display in the German Expressionist Gallery at the Virginia Museum of Fine Arts in Richmond.

Ernst Ludwig Kirchner’s ‘Taunus Road’ was completed in 1916. The restituted painting by the German Expressionist rejoins the Ludwig and Rosy Fischer Collection.