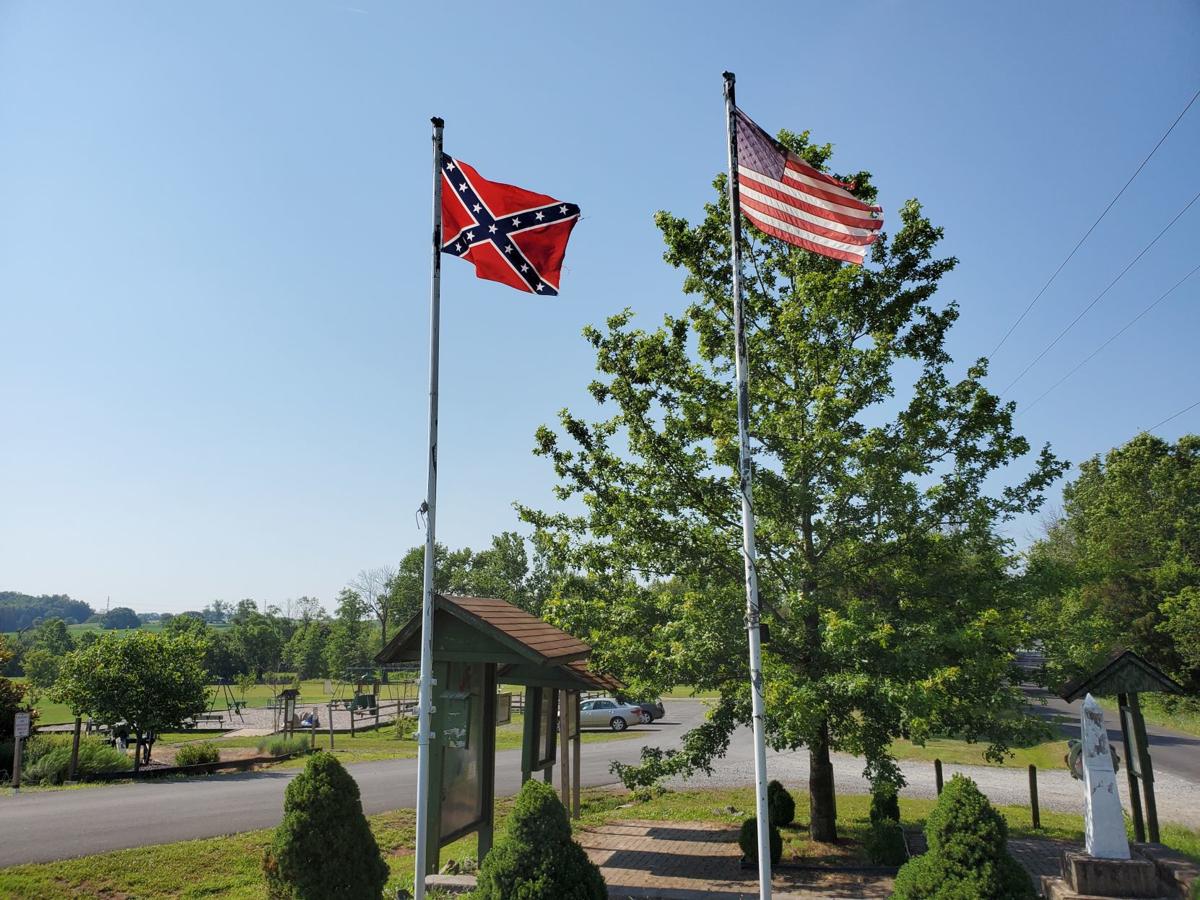 The Confederate battle flag and U.S. flag fly in Culpeper County’s Lenn Park near the monument to Capt. William Downs Farley, a scout for Gen. J.E.B. Stuart wounded there. 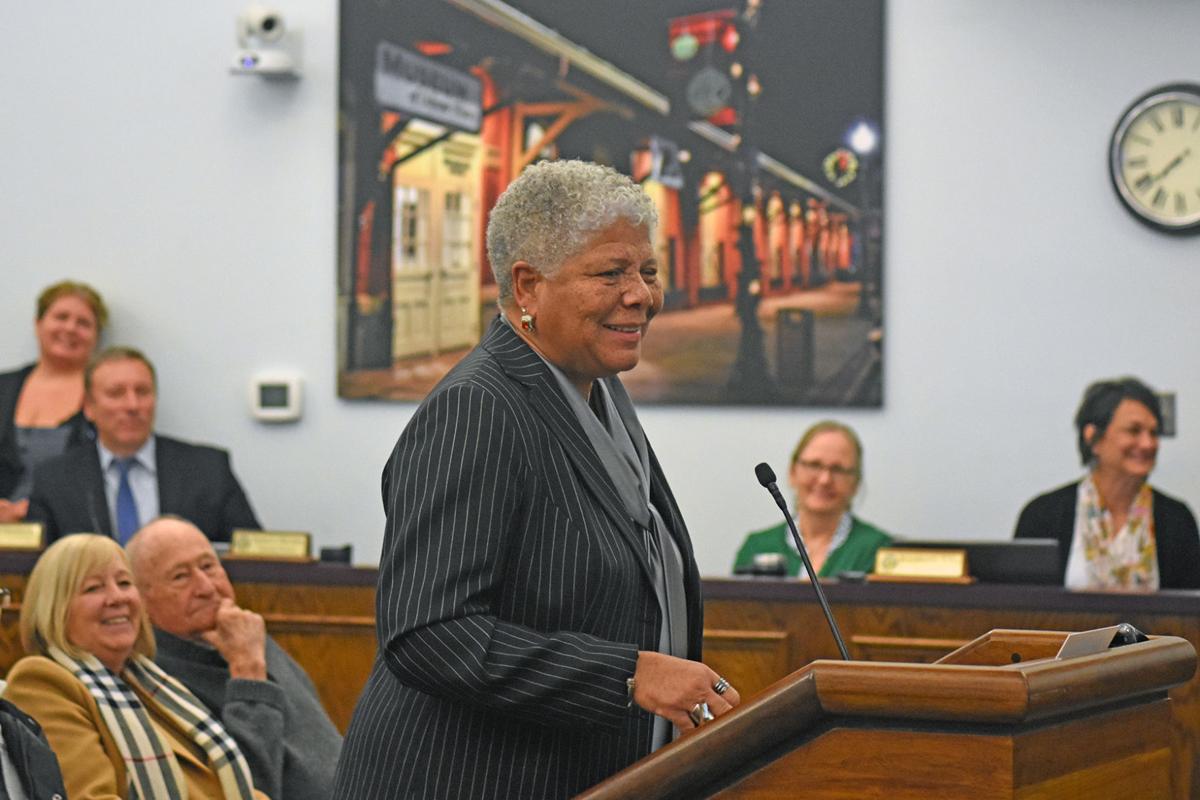 Hortense Hinton-Jackson addresses the county Board of Supervisors in 2019 after it named her a Culpeper Colonel, a local honor. 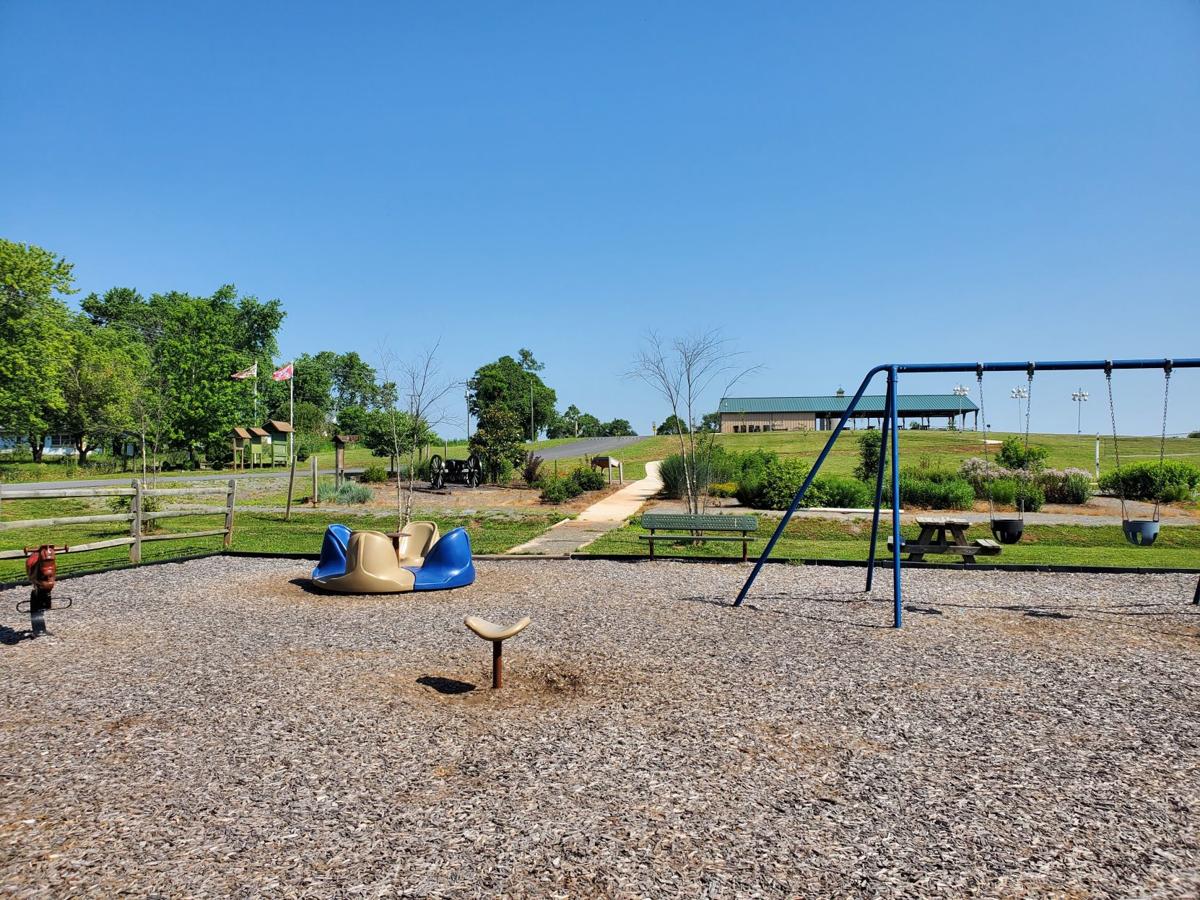 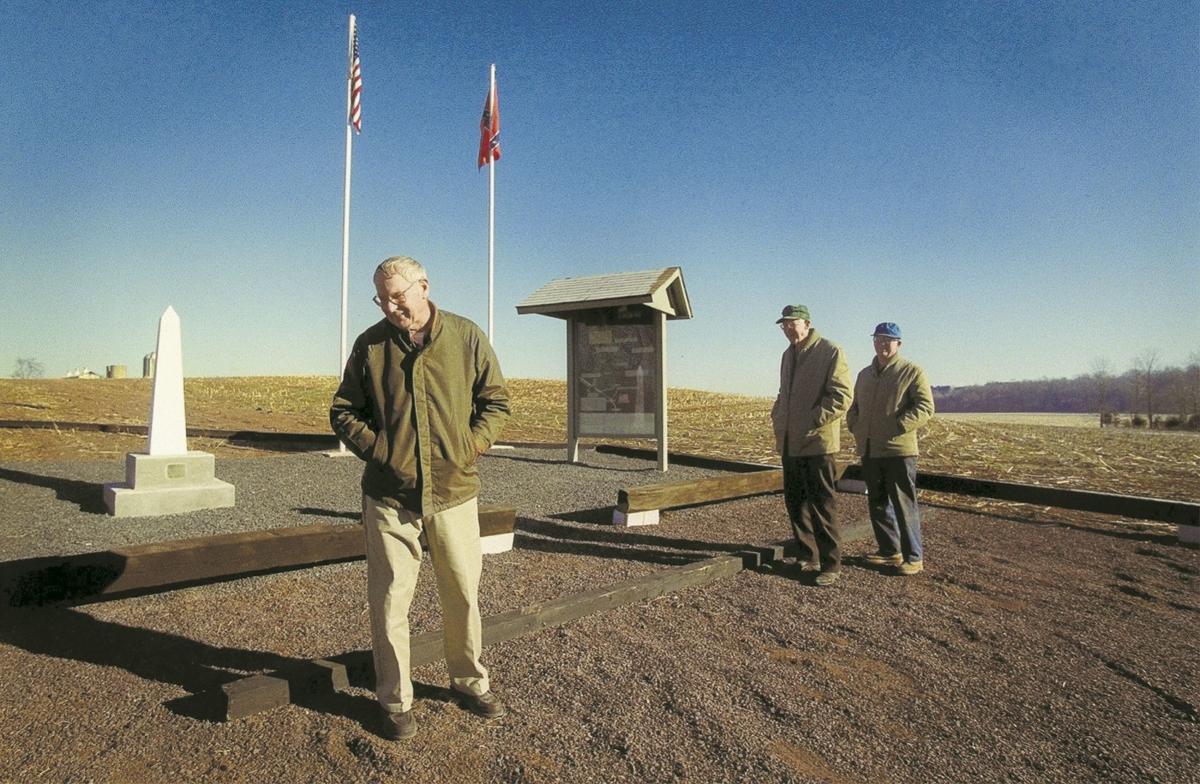 Seen in 2001, Wayne Lenn (left) and his brothers, Edwin (center) and Kaye "Bootie," researched the June 9, 1863, fighting at Norman’s Mill Ford on their Stevensburg farm and created Culpeper County's first Civil War park. The site includes a monument to a Confederate scout killed there, two flagpoles and a display describing the warfare, part of the Battle of Brandy Station. 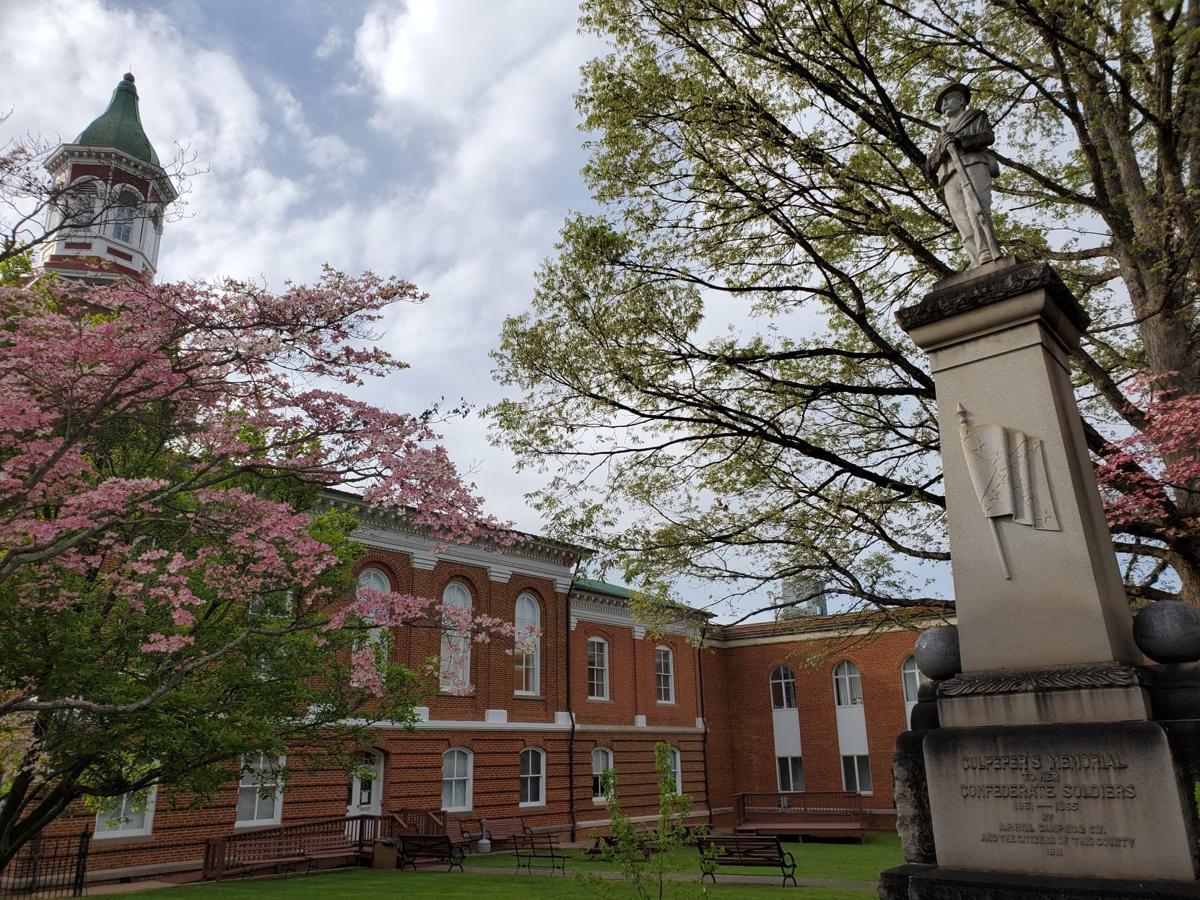 Culpeper County's Confederate monument, erected in 1911 to honor its Confederate soldiers, stands between the county courthouse and jail.

The Confederate battle flag and U.S. flag fly in Culpeper County’s Lenn Park near the monument to Capt. William Downs Farley, a scout for Gen. J.E.B. Stuart wounded there.

Hortense Hinton-Jackson addresses the county Board of Supervisors in 2019 after it named her a Culpeper Colonel, a local honor.

Seen in 2001, Wayne Lenn (left) and his brothers, Edwin (center) and Kaye "Bootie," researched the June 9, 1863, fighting at Norman’s Mill Ford on their Stevensburg farm and created Culpeper County's first Civil War park. The site includes a monument to a Confederate scout killed there, two flagpoles and a display describing the warfare, part of the Battle of Brandy Station.

Culpeper County's Confederate monument, erected in 1911 to honor its Confederate soldiers, stands between the county courthouse and jail.

An online petition urging Culpeper to furl a Confederate flag at a county park has quickly caught fire.

The petition, launched 12 days ago by Culpeper resident Amy Hunter, had garnered 1,555 signatures as of Saturday night.

Addressed to county Board of Supervisors Chairman Gary Deal, the petition calls for Culpeper to remove the Confederate battle flag that flies from a pole at the entrance to Lenn Park near Stevensburg.

The flag, situated with the U.S. flag beside a small monument to Confederate Capt. William Downs Farley, has been a sore point for years with some Culpeper residents. In 2015, Culpeper NAACP President Sanford Reaves pleaded with the governing board to retire the battle flag, which has been co-opted for decades by the Ku Klux Klan and foes of the American civil rights movement.

“As residents and leaders in Culpeper County process and respond to racial injustice in our country, now is the time for our county to do something to show a commitment to diversity, unity, equity, and justice,” the petition states. “Remove this flag and let the unity begin!”

The proposal’s supporters say removing the flag would help ease racial divisions in Culpeper and help advance better relations among residents and with local government.

The Rev. Adrian Sledge, pastor of MOVE Ministry in Culpeper and former pastor at historic Shiloh Baptist Church, told the Star-Exponent he is offended by the flag continuing to fly over the park along Mountain Run.

“The Confederacy lost,” he said. “Why fly its flag equal to the U.S. flag, at the same level? One flag represents unity; the other represents division, fighting to preserve slavery.”

Sledge, who served 26 years in the U.S. Army, said the flag’s display on public property perturbs him.

Culpeper native Hortense Hinton-Jackson, a lifelong educator who has moderated recent community dialogues about race relations and history, agreed that the battle flag should come down.

“When you celebrate something—a flag or a monument—you’re saying you want to remember it, that it is worthy of honor,” she said. “But the Confederacy was fighting to continue the enslavement of African Americans. ... The whole Southern economy was based on slavery.

“Stop trying to turn it into something else,” she continued. “If the South had won, we would still be enslaved.”

“If it’s a very public display, like in this park, then that’s a big statement,” Hinton-Jackson said of the Confederate battle flag at Lenn Park. “It says, ‘To hell with you and how you feel about it.’

“If my tax dollars are involved in maintaining that place, I have a problem with that. I think most people feel like that, with these public spaces.”

Hinton-Jackson, who attended a segregated high school in Rapidan, said she is encouraged by the hundreds of protests across the nation, and locally, in the wake of George Floyd’s killing in police custody in Minneapolis.

“I think it’s a different time, a different day,” she said. “In Culpeper, people are listening who have never listened before. People here have awakened; they are hearing things differently than before. Some eyes have been opened. ... I would like to think people are beginning to get it.”

The people who most need to discuss, understand and come to grips with such difficult issues are the community’s white residents, she said.

On Thursday, the Washington area’s NBC4 television affiliate aired a news report on the renewed dispute over the Confederate flag in Lenn Park.

The Culpeper flag was first in the news in 2015, after a white supremacist murdered nine worshipers in their historic church in Charleston, South Carolina.

The Rev. Sanford Reaves, Jr., then president of the Culpeper Branch of the NAACP, asked the Board of Supervisors that fall to remove the flag

He asked the supervisor to consider how the symbol makes African Americans feel.

“As a young boy, I was told when I saw someone with a Confederate flag (that) I was to move as fast as I could to get away from that,” Reaves told the board. “If I go to a restaurant that flies a Confederate flag, I don’t feel welcome. As many African Americans won’t feel welcome [if they saw that]. Some people may feel differently, but if you haven’t walked in our shoes, then you wouldn’t understand.”

What will visitors to Culpeper think when they see the Confederate flag flying in a public park, he asked.

The board voted to return the 1,400-square-foot property where the Confederate flag flies to the Lenn Brothers, who gave 84 acres for the park to the county in 2006.

But on Friday, one of the brothers told the Star-Exponent they rejected the county’s attempt to give them the plot around the memorial to Farley, Confederate Gen. J.E.B. Stuart’s scout.

“We told them we didn’t want anything to do with it,” Kaye Lenn told the Star-Exponent. “... Since we don’t have the property any more, it wasn’t our concern anyway. But I guess the NAACP has been getting all hot under the collar, getting back in the saddle over it.”

County officials said their agreement with the Lenns to take the parkland required Culpeper to maintain the Confederate flag on the site, NBC4’s investigative team reported.

“The flag has nothing to do with the Stars and Bars that was flown by the Confederacy,” Lenn said in an interview.

Rather, he said, it marks the spot where Farley was mortally wounded and the ground where Confederate and Union forces fought on June 9, 1863, near Norman Mills Ford on Mountain Run at the base of Hansbrough’s Ridge. The engagement was part of the opening phase of the Battle of Brandy Station.

“But Lenn Park is not used and enjoyed by all the county residents due to the Confederate flag that is proudly displayed when entering the facility,” it states.

“The Confederate flag is not a symbol of southern pride but rather a symbol of rebellion and racism,” the petition concludes. “Symbols of hate have no place in our county-run facilities. ... It is past time for the flag to come down.”

Asked Saturday about the Board of Supervisors’ attempt to give the flag site back to the Lenn brothers, board chairman Deal referred a reporter to County Administrator John Egerston.

The NBC4 team also interviewed longtime Culpeper residents about the 30-foot monument to Confederate soldiers that stands beside the county courthouse. Hinton-Jackson was among them.

On Friday, Hilton-Jackson told the Star-Exponent that additional signs or plaques should be placed by the monument to further explain its history, and to put that in a larger, more inclusive context.

“The other day, I watched as Stonewall Jackson’s statue was removed,” Mike Dickinson of Richmond told attendees. “What are they going to put in its place? Perhaps a digital billboard that shows the illiteracy rate of kids in Richmond City Schools? How about the graduation rate, or how many of these schools actually have a PTA?”

A Virginia strip club owner, Dickinson has been seeking the GOP nomination to challenge Rep. Abigail Spanberger for her 7th Congressional District seat.

Amissville resident Blaine Pardoe, an author of science fiction and military history books, spoke at length on the statue issue and decried what he said was a long campaign to “destroy America’s self-image.”

“When people say they see hate or injustice in a statue, it says more about them and what is in their hearts than it does anything about the statue,” Pardoe said. “The statues say nothing; they are silent icons. You see what you want to see.”

Pastor Sledge, asked if other Confederate symbols in Culpeper should be removed, said, “We need to have a conversation about it. We need a serious dialogue for those outdated things to come down.

“Many times, they want us to forget about slavery and move on,” he said. “How can we, when there are still symbols that represent slavery? The conversation needs to happen now, with a legislative process.

“I don’t believe in vandalizing, pulling things down,” Sledge concluded. “That’s not the personality of this town.”