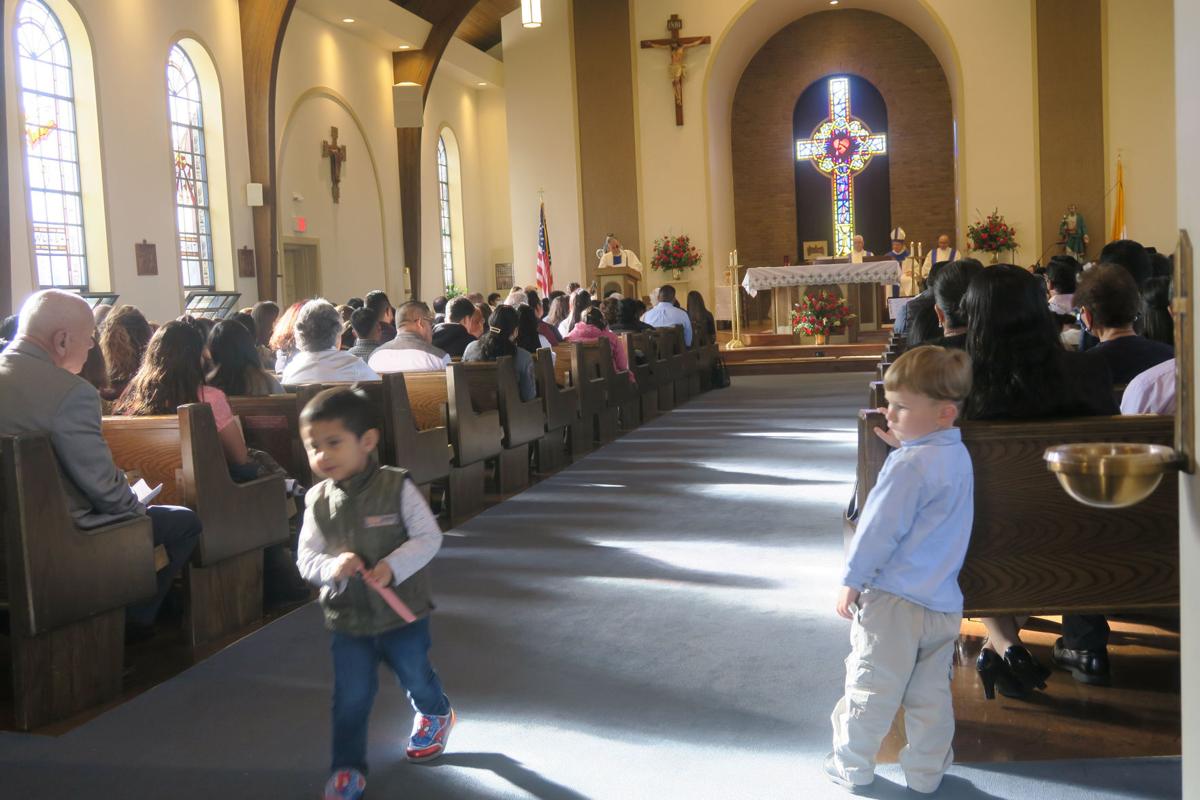 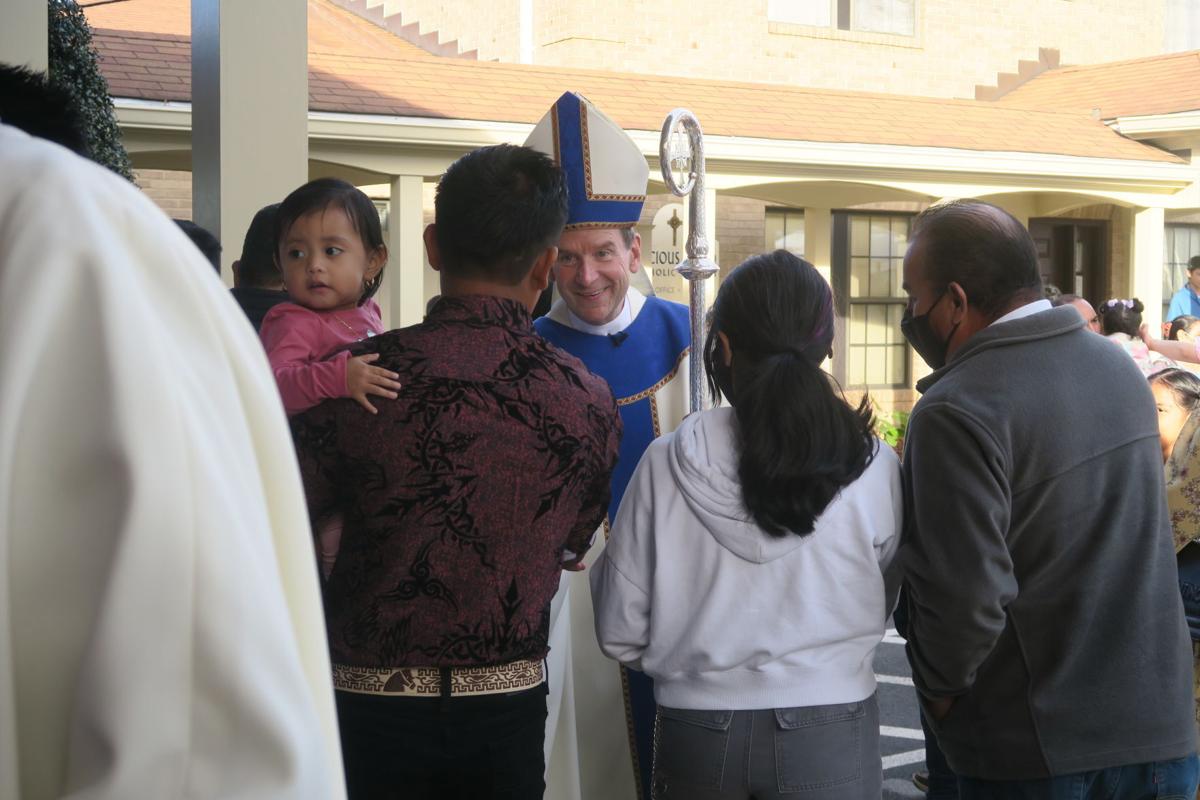 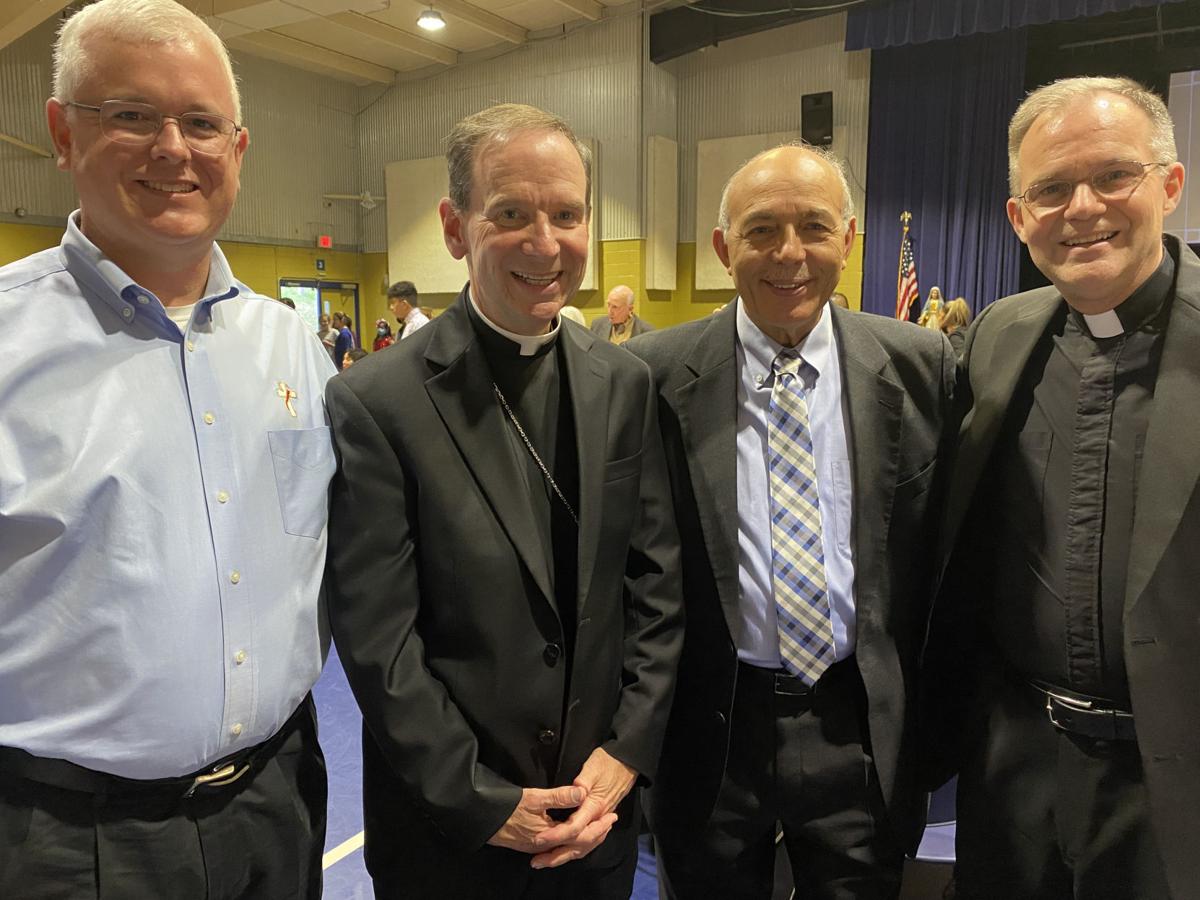 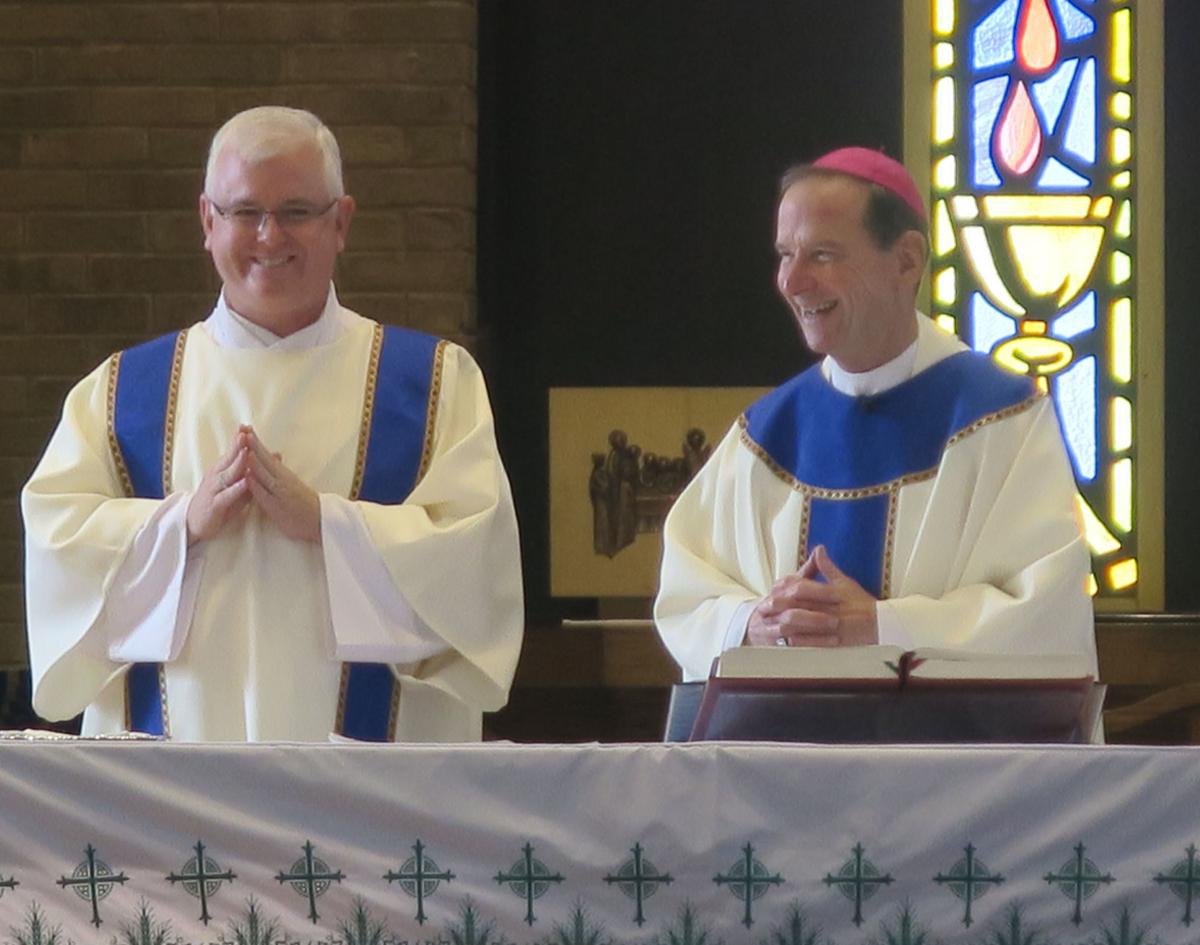 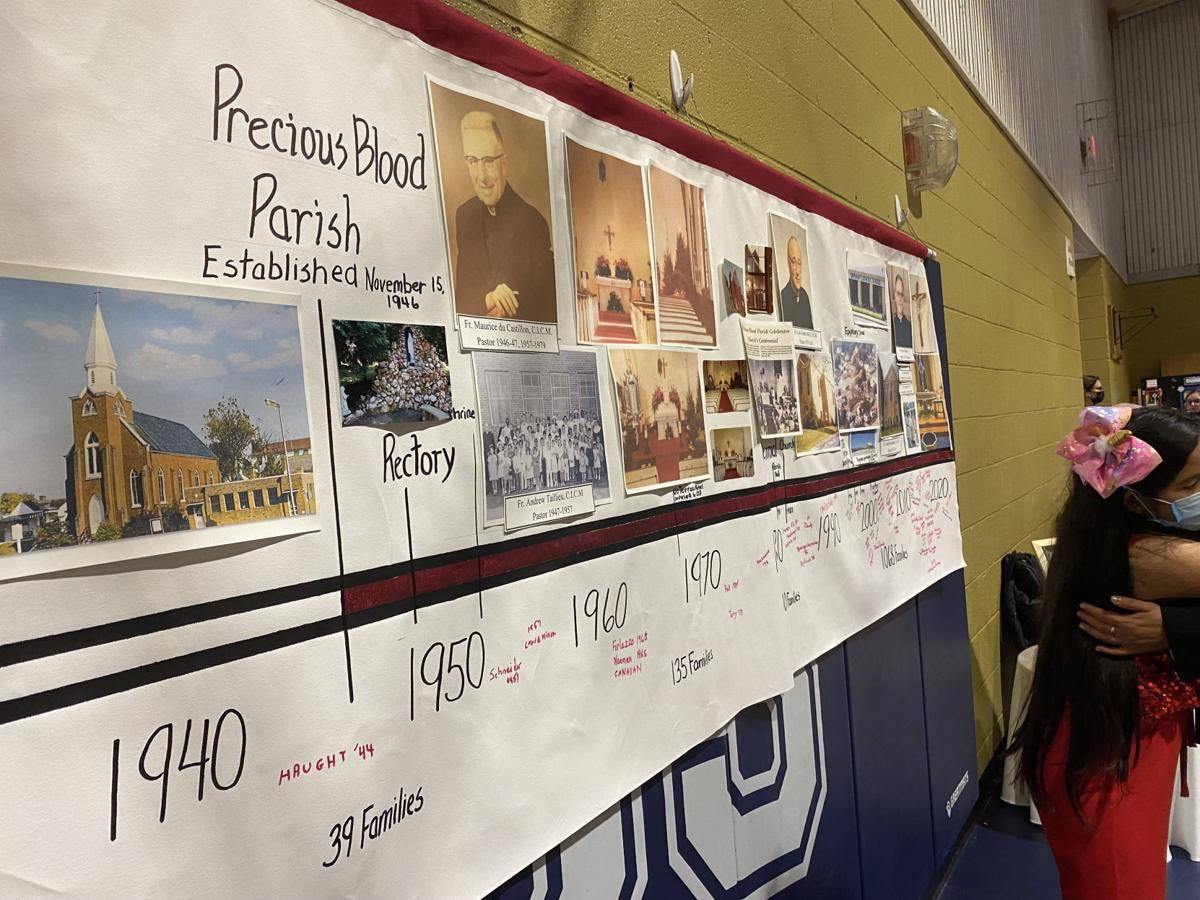 Timeline of the history of Precious Blood Catholic Church in Culpeper on display at a 75th anniversary reception last Sunday at Epiphany Catholic School.

Precious Blood Catholic Church of Culpeper celebrated 75 years as an independent parish with an Anniversary Mass on Nov. 7 that filled the church to beyond capacity with a joyful, unified gathering of English and Spanish-speaking parishioners.

The church that started on Main Street in Culpeper with 39 families on Nov. 15, 1946 has since grown to more than 1,300 families, about one-third of its members Hispanic.

Most Reverend Bishop Michael F. Burbidge, Catholic Diocese of Arlington, attended the anniversary mass, saying it was a great joy to be there on “a day for all of us to remember,” noting all the priests, deacons, religious and lay faithful who built the foundation of Precious Blood, many who have gone home to God, the Bishop said.

“We rejoice in thinking about the blessings that God has showered on the parish through the years,” he said.

Burbidge called for a renewal of the promise to be faithful witnesses for God and to build up his body in the parish.

“This is our turn, our turn to continue to make this a vibrant and love-filled parish,” he said.

It “should be a home away from home on our journey to arrive at our eternal home,” he said.

It’s a place where people come for food and shelter, Walsh said, mentioning the Missionhurst priests who labored for nearly 20 years to launch the Culpeper parish.

So much living occurred in the church the past 75 years, Walsh told congregants, first communions, baptisms, weddings, confirmations. The externals are not the most important part of Catholicism, he added, but the sacrifice of God—“mercy that depths will never be able to fathom.”

A new day now begins, Father Walsh said, as church members “continue to walk together along the paths our Lord chooses for us.”

A congregant for nearly 50 years, Peggy Place remembered the original church building that fronted Main Street. All four of her children made First Communion at Precious Blood, she said after the service on Sunday.

The Schneider-Vial family of Berry Hill in Brandy Station are also long-time parishioners, with four generations calling it home since the 1950s.

“We watched as a tiny little brick church and small community blossomed into a modern, international parish with hundreds of members,” wrote Cecilia Schneider-Vial, part of a display at Epiphany Catholic School on view during a reception that followed the ceremony.

Schneider-Vial’s mother, Geraldine, from Chile, still remembers fondly her experiences at the church through baptisms, marriages, memorials and daily mass.

“Bonds were formed that upheld international moves and when we see the statue of St. Joseph that my parents contributed it makes this parish always feel like home,” Schneider-Vial stated.

Manuel Casillas shared that in 1999 he encouraged the late Father Leo Zonneveld, a beloved friar for 33 years, to launch a mass in Spanish. Churches in northern Virginia were taking away Culpeper Hispanics, Casillas wrote in a 2020 letter celebrating the 20th anniversary of the first Spanish mass at Precious Blood on Feb. 5, 2000.

Zonneveld told Casillas to collect signatures from other Spanish speakers wanting the mass, so he did, garnering 250 in support within a few weeks.

“I had the dream of seeing the church full and today, thanks be to God, this is a reality,” Casillas stated. “And my next desire is to see this community united where no group is (or feels) they are more important.”

Parishioner Julia Scalzo led the committee that planned the anniversary celebration starting back in February.

“Every church should grow on a strong history—the parishioners who built up the church and the younger parishioners building up our parish and our community,” she said at the reception with enough food, both of English and Spanish variety, to feed 400 people.

Father Walsh said the church’s growth has certainly coincided with the high growth in Culpeper and Northern Virginia, but in a smaller town where there’s more of a sense of community, he said.

Bishop Burbidge attributed the parish’s longevity to strong pastoral leadership bringing the Hispanic and Anglo congregations together as one.

Deacon Tirado has been with Precious Blood since 2007, having been ordained in his native Puerto Rico. Worldwide, 90 percent of Hispanics are Catholics, he said at the reception.

When he came to the church nearly 15 years ago, there were around 100 Spanish-speaking congregants. Now that number has grown to 400 or more on a Sunday. He said the church provides Catholic Hispanics with all that they need.

“The sacraments, and to help us have a good, strong faith,” Tirado said.

Michael Alan Humphries, now 40, will be in his 70s when released in unprovoked fatal shooting of Unionville man, 24-year-old Alistair Smith; defendant says, "I cracked," in murder of man he thought was having an affair with his wife.

Timeline of the history of Precious Blood Catholic Church in Culpeper on display at a 75th anniversary reception last Sunday at Epiphany Catholic School.