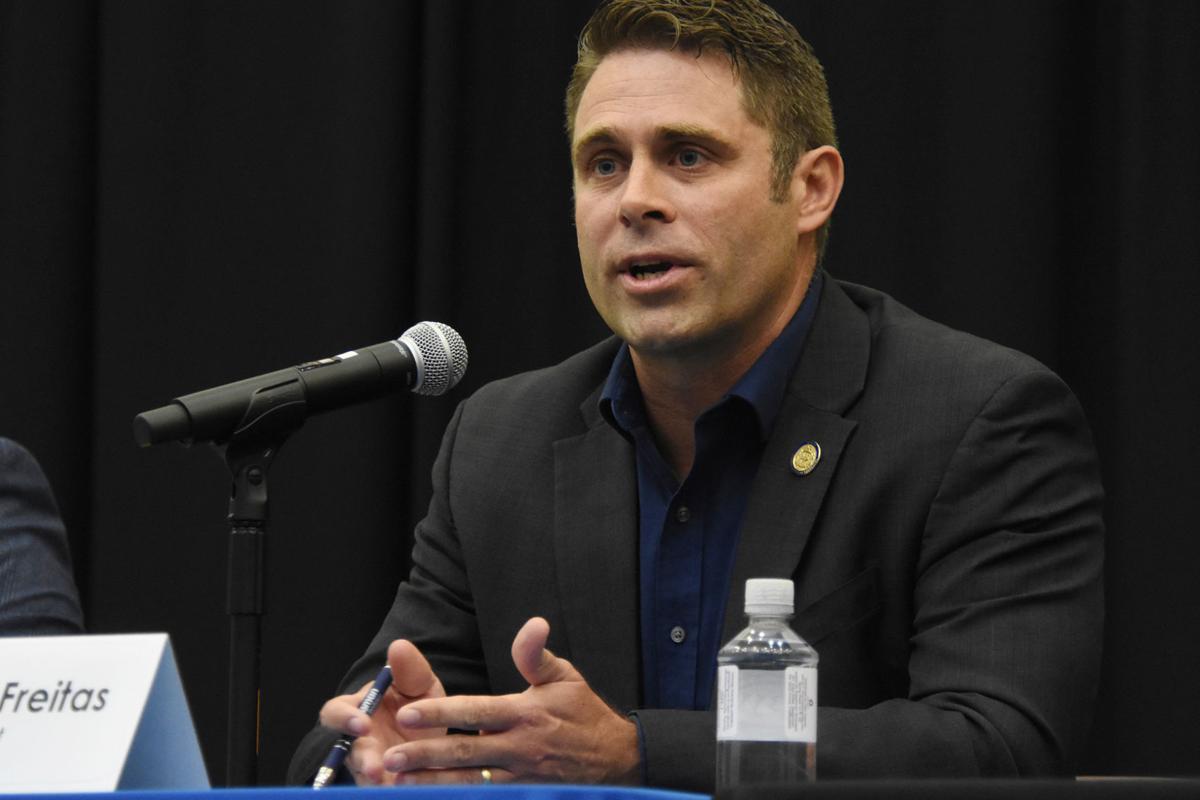 30th District Delegate Nick Freitas answers a question during a public forum in Culpeper during the recent election season. 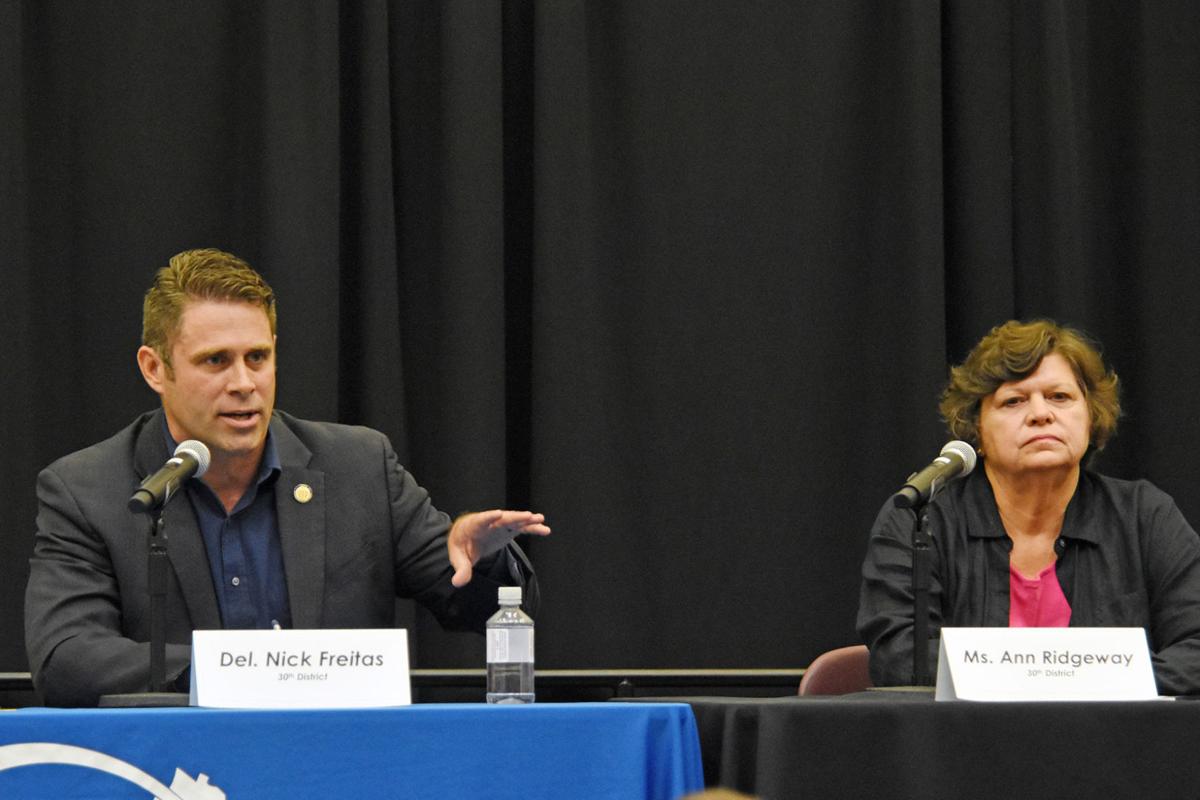 Candidates for the Virginia House of Delegates Nick Freitas and Ann Ridgeway participate in a public forum at the Daniel Technology Center. Freitas was reelected to a third term Nov. 5 following a massive write-in campaign.

The three-member Culpeper County Electoral Board on Friday certified results in the 30th District House of Delegates election that amassed a historically significant number of handwritten votes for incumbent Del. Nick Freitas.

The Culpeper Republican, presumed winner, declared victory Tuesday night over Madison Democrat Ann Ridgeway even as the vote counting prepared to launch. The effort that got him reelected was certainly substantial.

“It was definitely the largest write-in victory in Virginia,” said Freitas’ campaign manager Joe Desilets, a Northern Virginia-based political strategist who worked on the successful 2016 Donald Trump presidential campaign in Pennsylvania. “The old biggest was Jackie Stump in 1989.”

A United Mine Workers leader, the late Stump, of Abingdon, ran as an independent write-in candidate to defeat longtime Del. Donald McGlothin, a Buchanan County Democrat during the Pittston Coal strike.

According to historical online records of the Virginia State Board of Elections, Stump received 7,981 write-in votes in that election 30 years ago, earning 67 percent of ballots handwritten in his name to assume the District 4 House of Delegates seat. His campaign slogan was, “Write in Jack Stump. He’ll Speak Up,” according to the Associated Press.

Freitas, a Green Beret combat veteran, was first elected in 2015 as state delegate to Culpeper, Madison and Orange counties. On Tuesday, 15,118 write-in votes were cast in the 30th District election to Ridgeway’s 10,998, according to the latest, noncertified figures from the Virginia Dept. of Elections.

Freitas received substantial support from around Virginia and the country for his reelection campaign, both financially and from volunteers. Large red, white and blue signs scattered across the district’s farm fields, stating: “Write in Nick Freitas.”

In the weeks after the state electoral board in August refused to allow Freitas’ name to appear on the ballot due to several missed paperwork filing deadlines, volunteers walked the streets in district towns recruiting support. They had a presence at many community events as Freitas participated in various forums and town halls. On Election Day, voters got free pens marked in red with, “Nick Freitas,” as profiled in Virginia Mercury.

“We also knocked on 60,000 doors in 2 1/2 months, had a disciplined message across every medium, and had literally 200 unpaid volunteers across the entire district on Election Day,” Desilets posted Wednesday on twitter. “Nick and our team out-organized and out-worked the Democrats every single day from the start.”

Texas-based Young Americans for Liberty, a libertarian student activist group, backed Freitas, hosting him as a speaker at its September convention. “THE BIGGEST WRITE-IN VICTORY IN VIRGINIA HISTORY This is what NO EXCUSES looks like This is what defying political odds looks like I’m so proud that @YALiberty students were able to play a major role in @NickForVA winning his “unwinnable” write in campaign #MakeLibertyWin,” posted Young Americans President Cliff Maloney Jr. on twitter after Election Day in Virginia.

In Culpeper County on Tuesday, Freitas received 5,205 write-in votes in his name—or something like it, according to the certification process conducted by the local electoral board, comprised of Chairwoman Jan Huss, Vice Chairman James Holmes and Secretary Clive Richmond. The 5,205 figure is about 125 short of the total 5,330 write-ins cast in District 30 – those 125 were either votes deemed invalid for Freitas or were for someone else.

At the Friday meeting in the voting office on Main Street, open to the public, a computer screen showed a tally (4,229) of votes spelled correctly on the ballot—Nick Freitas or Nick Freitas-R.

Electoral board members, each with their own paper copies, then went through 17 pages of spelling variations of the incumbent’s name to determine each group of votes or individual vote as valid or invalid. Throughout the process, Holmes, a longtime local election official, had open and continually referenced the state code book designating the standard for valid votes.

“If the intent of the voter is discernible or the name is phonetically recognizable, the vote has to count,” Holmes repeated numerous times as Richmond read each voting line aloud.

The vote validation process lasted about 50 minutes and included at least several dozen spelling variations of Freitas’ name, with minor misspellings easily approved. “Nick Freit,” as written by 20 Culpeper voters, was the first to pose a problem for the board: “That’s pretty far off. If you want to count it, you can,” Chairwoman Huss said.

“I see that and it’s 20 votes,” responded Holmes with Huss replying, “Why would it be 20 people spelled it that way?” Richmond, the secretary, chimed in saying it’s possibly the voting machine camera cut the name off. Holmes said, “We have no choice but to accept it,” and the votes counted. Nick Fritas (18 votes) was also determined valid and so was Nick Fretas on 17 ballots.

The electoral board also accepted Nick Feitas, Nick Freitos, Freits and Nick Frietes. Commented Huss, “I don’t know how they could screw up his name that much.”

A vote for Nick was not counted while Nick Fre was also determined invalid by the electoral board. Three votes for Rick Freitas counted as for one ballot marked, Freitz, “That’s an issue,” Holmes said and Huss agreed: “That’s pushing it.” She added, “It’s not going to hurt him one way or the other.”

Nick Freitaa was accepted—“They were getting there,” Holmes said—while Freims and Freton —“Is that like a futon?” quipped Richmond—were deemed invalid votes. NICKTKLE was not accepted nor was Freit Rick. Freitag Freitag received a thumbs-down from the electoral board while Freitas Freitas “has to be acceptable,” Holmes said. Frick Neitas was a no, though the board validated Mick Freitas, “His cousin,” Richmond said, as well as Nate Freitas, “His other cousin.”

“Neither could anyone else,” Huss said, agreeing with the board to accept Nick F.

“We have to give them the benefit of the doubt,” regarding a write-in for Nick Fictas, Holmes said, “We know what their intent was,” while ballots marked Nick Fleis, Nick Forres and Nick Foy were not counted. Nick Freitig was also discounted for not being phonetic as well as Nick Freijtas, Nick Frentes, Nick Fretti, Nick Friesha, Nick Frize and Nick Fruit. Of a vote marked Nike Freitas, Holmes said, “You have to let Nike silde.”

The write-in count was certainly the largest in Culpeper voting history, according to Holmes. And it cost the county electoral board extra money, nearly $1,000.

Recording the more than 5,000 votes from the voting machine paper tape into the voting office computer system took 10 election officials 6.5 hours to complete. Associated labor costs were $700, according to Registrar James Clements, plus $175 for lunch on vote-counting day and around $100 for supplies. “We’ll eat it,” he said of the unbudgeted expense. “We’ll have to figure how to absorb it.”

As for whether the Freitas write-in campaign is the largest in state history, the Virginia Dept. of Elections would not confirm it.

“We do not have historical information about write-in votes,” agency spokeswoman Andrea Gaines stated in an email to the Star-Exponent. She referred a reporter to online election records, dating to 1789, at the Virginia Dept. of Elections website for more information.

Gaines said local electoral boards have until this Tuesday, Nov. 12 to complete their individual canvasses. The State Board of Elections will certify those results on Nov. 18.

30th District Delegate Nick Freitas answers a question during a public forum in Culpeper during the recent election season.

Candidates for the Virginia House of Delegates Nick Freitas and Ann Ridgeway participate in a public forum at the Daniel Technology Center. Freitas was reelected to a third term Nov. 5 following a massive write-in campaign.