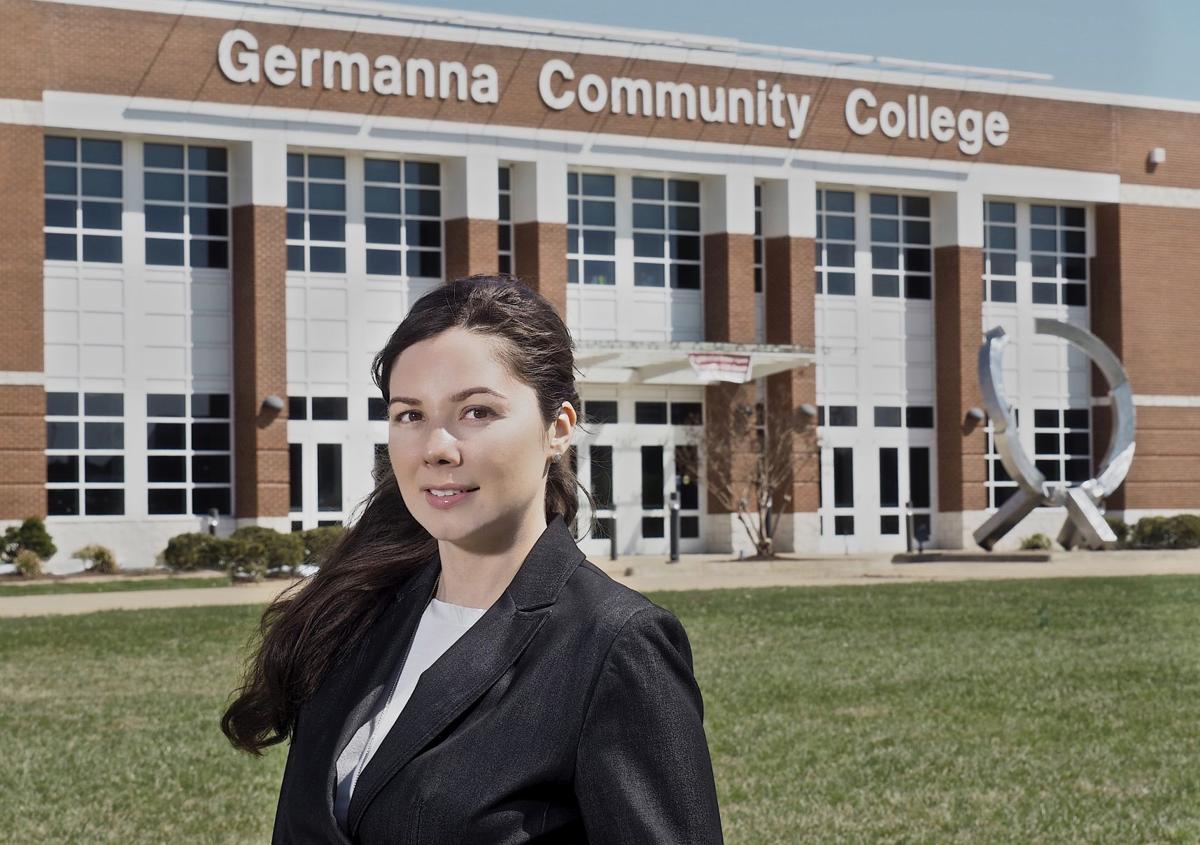 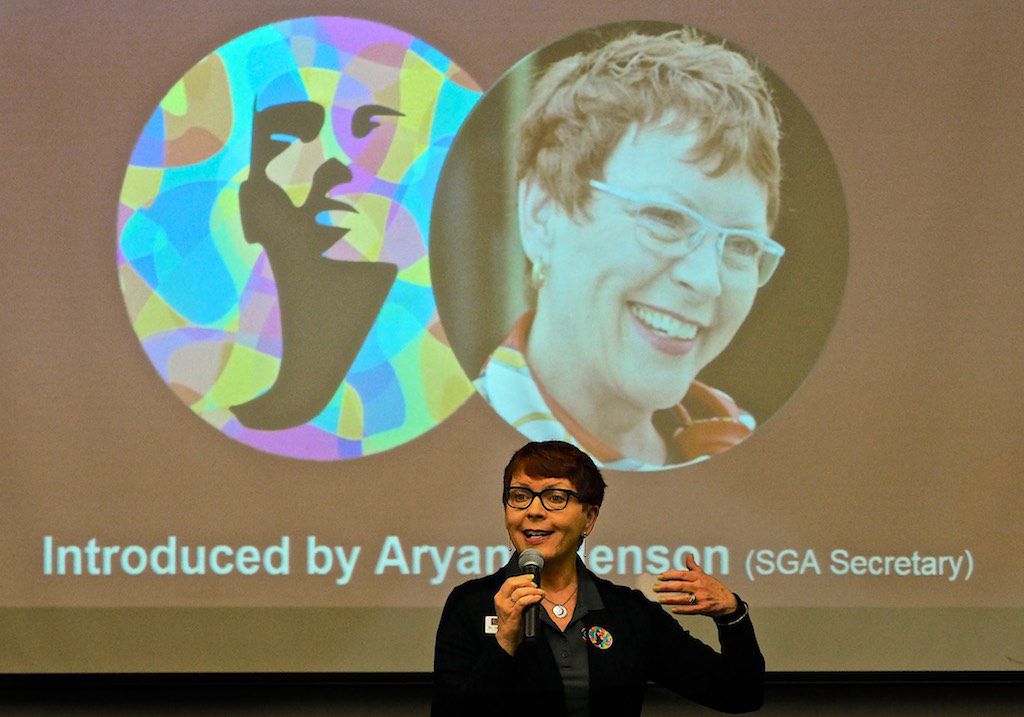 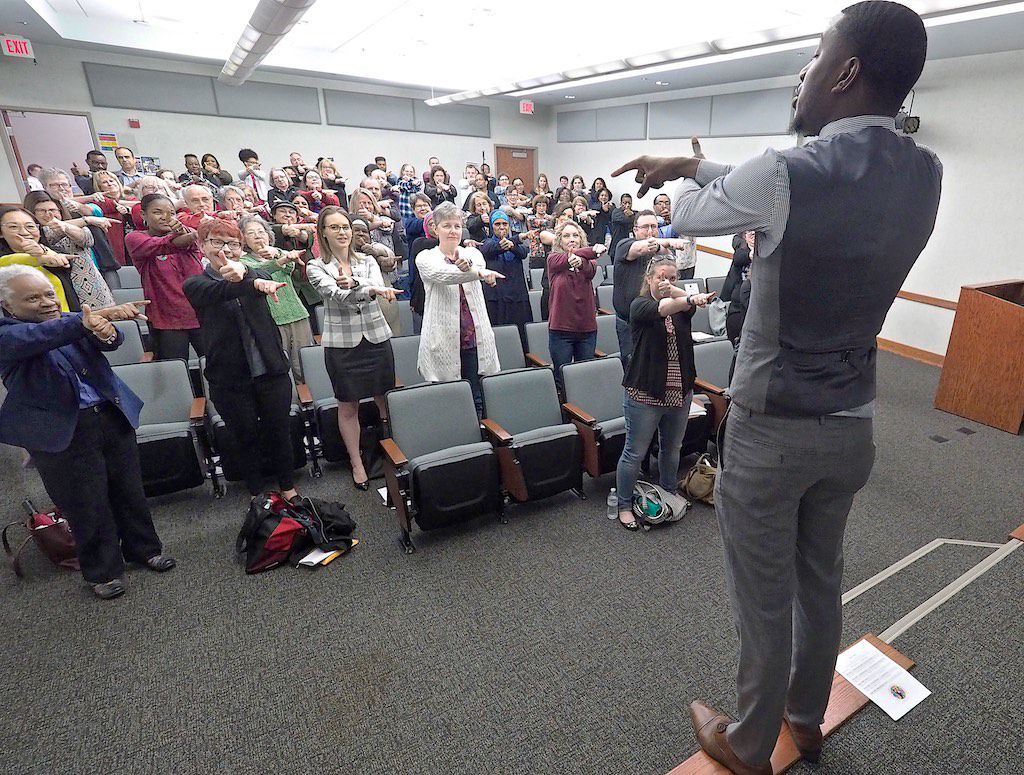 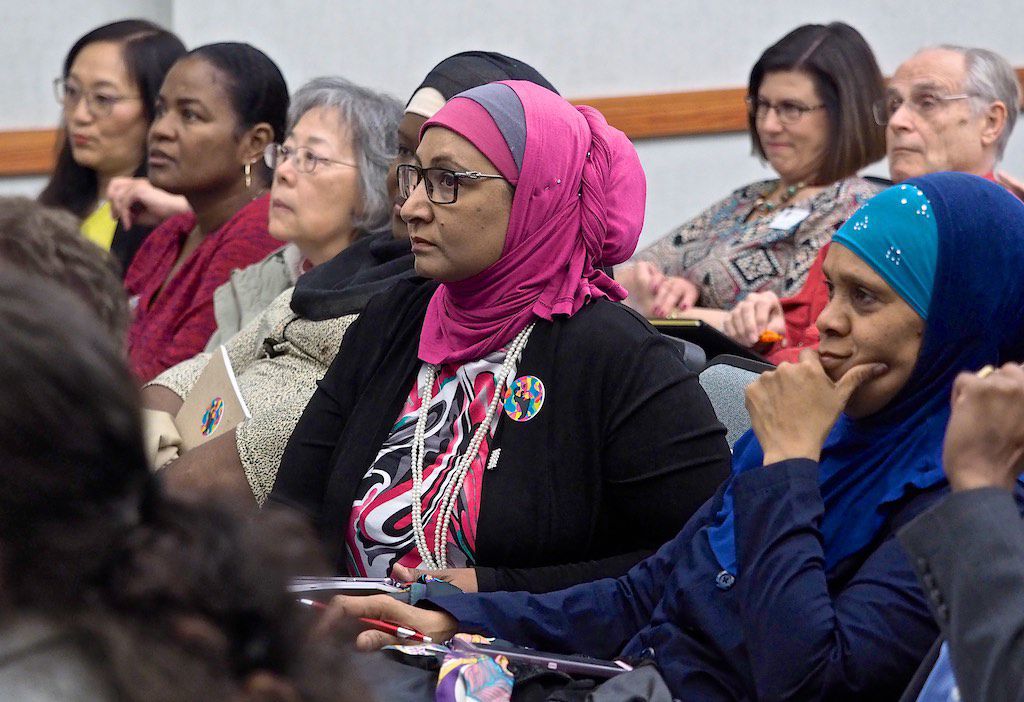 In her middle school, other girls made fun of how she spoke and asked her, repeatedly: “What are you? Somebody’s maid?”

As a consequence, to blend in, Colon took pains to shed her accent and cultural identity.

On Friday, Colon led Germanna’s Day of Diversity, Inclusion and Awareness, a daylong series of training presentations and discussions for the college’s faculty, staff and students, and community members. The college partnered with the Virginia Community College System to hold the first-ever event.

Dr. Janet Gullickson, Germanna’s president, welcomed participants, but warned them that they would confront challenging material.

Citing some of her own life experiences, Gullickson said she believes people—“whether we know it or not”—hold innate prejudices about others and often act them out.

It’s up to educators to wield “the transformational power that Germanna has to fundamentally change the trajectory of folks who have experienced discrimination and prejudice,” she said. “Only we here can make that happen.”

“You can only do that through honest conversation,” she said. “... I invite you to have those courageous conversations today and to reveal your prejudices, because the biggest mistake we’ve made in this post modernity ... is to say we’re past our prejudices. We’re not.”

She said that all of the day’s 200-plus participants, who included K-12 teachers from all area school divisions, needed to move past their own biases to help community members succeed.

The region holds tremendous potential to improve such situations because “we are a community who loves each other,” Gullickson said.

Germanna held the event at its Fredericksburg Area Campus in Spotsylvania County, but streamed its video to its campus in Stafford, Orange and Culpeper.

For Colon, the day brought her full circle. Born in Fredericksburg when her father was stationed at Marine Corps Base Quantico, she was raised in Puerto Rico, Cuba and California. She was educated at the University of Mary Washington, the University of Hawaii and Virginia Commonwealth University, where she earned her doctorate in urban services leadership.

She credits a college adviser at UMW with prying her life story from her, and then suggesting she try a program that helped students from other countries.

That’s how Colon wound up, in her first job, teaching at Stafford Senior High School to refugees from war-torn nations, including Nepal, the Congo, and Iraq.

She called that experience enriching, rewarding and transformative.

“I gave them support they may not have gotten otherwise,” Colon said. “I knew something of what they were going through. I could help them along the way. That’s so much more meaningful when you’ve had some of the same experiences.”

Colon also knows what it means to be disabled. She dislocated a shoulder and suffered nerve damage while training as an Army soldier bound for Iraq.

As she moved through life, each fresh challenge helped broaden her perspective and lead to new opportunities. “Whenever I found acceptance in a new community, I re-imagined who I could be,” she said.

Now, at Germanna, she said, she wants “to make sure that, whoever you are, every student feels welcome.” Hence, Friday’s Day of Diversity training for everyone.

North Carolina educator Michael Bonner, author of “Get Up or Give Up: How I Almost Gave Up on Teaching,” gave a riveting keynote presentation.

He stressed how difficult it can be for Americans to have frank conversations about their different cultures. And he warned that everyone, if they don’t think about it, can be a victim of their own implicit bias.

“If everyone in your circle of friends looks like you, you might want to question that,” Bonner said.

He urged his fellow teachers to examine not only students who excel but also those with learning problems. Students suffer trauma in their personal lives, neighborhoods and school systems that may not be readily apparent to educators.

Bonner said he goes to lengths to get to know students and their families in their home settings, which often reveals situations that affect a student’s learning and behavior.

“A student can be brilliant, but suffering on the inside,” he said.

And, among many inspirational quotes he shared, Bonner cited Frederick Douglass, who said: “It easier to build strong children than to repair broken men.”

“One of my favorite things about working at Germanna is the chance to give back to my hometown, Culpeper,” said Dr. Sarah Somerville, a Culpeper native who is Germanna’s assistant dean for student development. “Our community is so enriched with folks from many different backgrounds and perspectives.”

“Sharing in and learning from the diversity of peoples who come to Germanna has blessed my professional and personal life in so many ways,” Somerville added. “We take great pride in making everyone feel welcome here.”

“One of the wonderful aspects of community-college life is the opportunity to walk the halls or sit in the classrooms and see a microcosm of the world we live in,” said Culpeper County resident Connie Kincheloe, a longtime member of the Germanna Community College Educational Foundation and a former chairwoman of Virginia’s State Board of Community Colleges. “All races and religions participating equally in their educational experience—realizing the opportunity to pursue their dreams and reach their full potential.”

By the end of this academic year, Germanna expects its to headcount from Culpeper County will number over 1,000 people, including noncredit workforce-training students.

With a district larger than Delaware, the college serves Culpeper, Orange, Madison, Stafford, Spotsylvania, Caroline and King George counties and the city of Fredericksburg.

Dozens of Germanna students attended Friday, with many attendees watching the morning’s presentations via streaming video in overflow rooms at the Spotsylvania and Culpeper campuses.

The tallest cliff in the Solar System is one steep drop

The tallest cliff in the Solar System is one steep drop

WH turns focus to getting Under 30 vaccinated

WH turns focus to getting Under 30 vaccinated