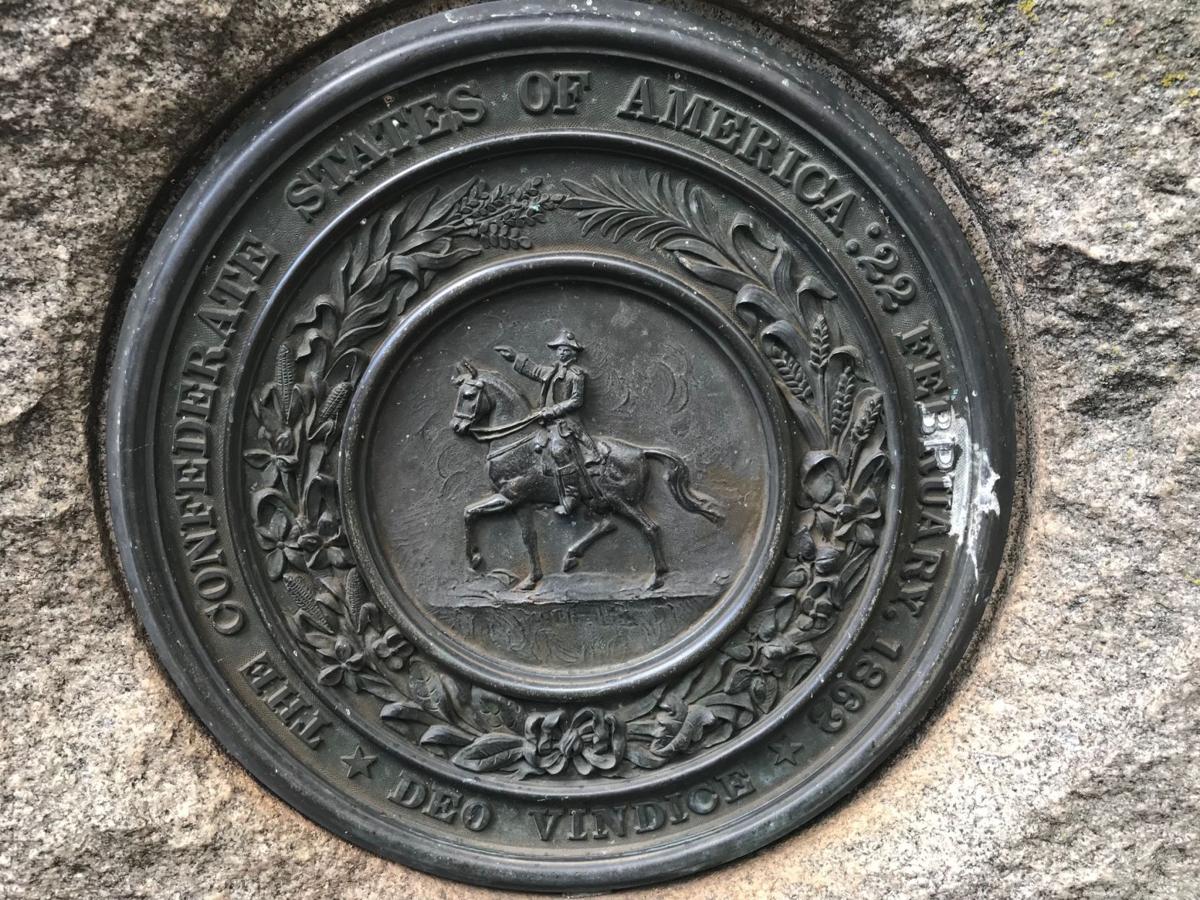 The Confederate States of America’s seal adorns one side of the Confederate monument on the lawn beside the Culpeper County Courthouse. 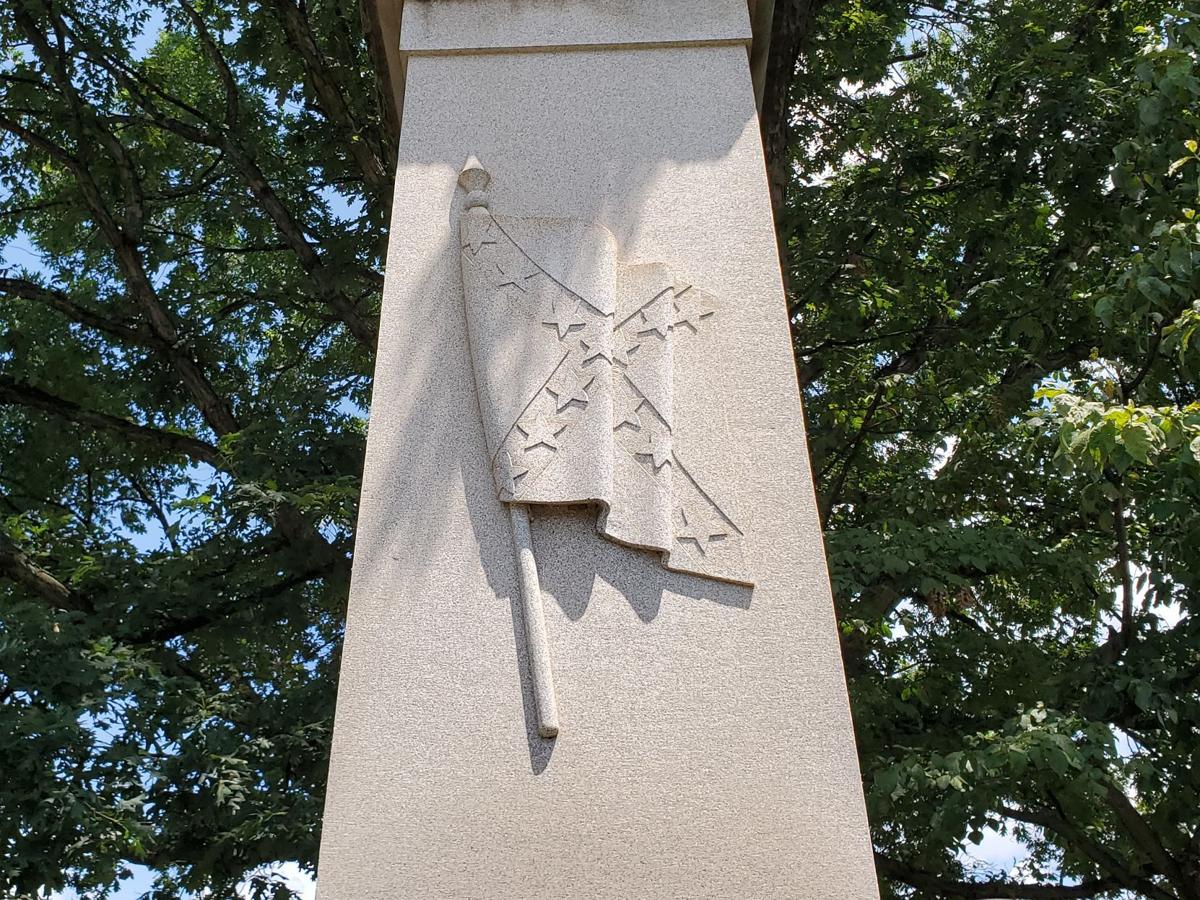 The Confederate battle flag decorates the front of Culpeper County’s Confederate monument, on the courthouse grounds. 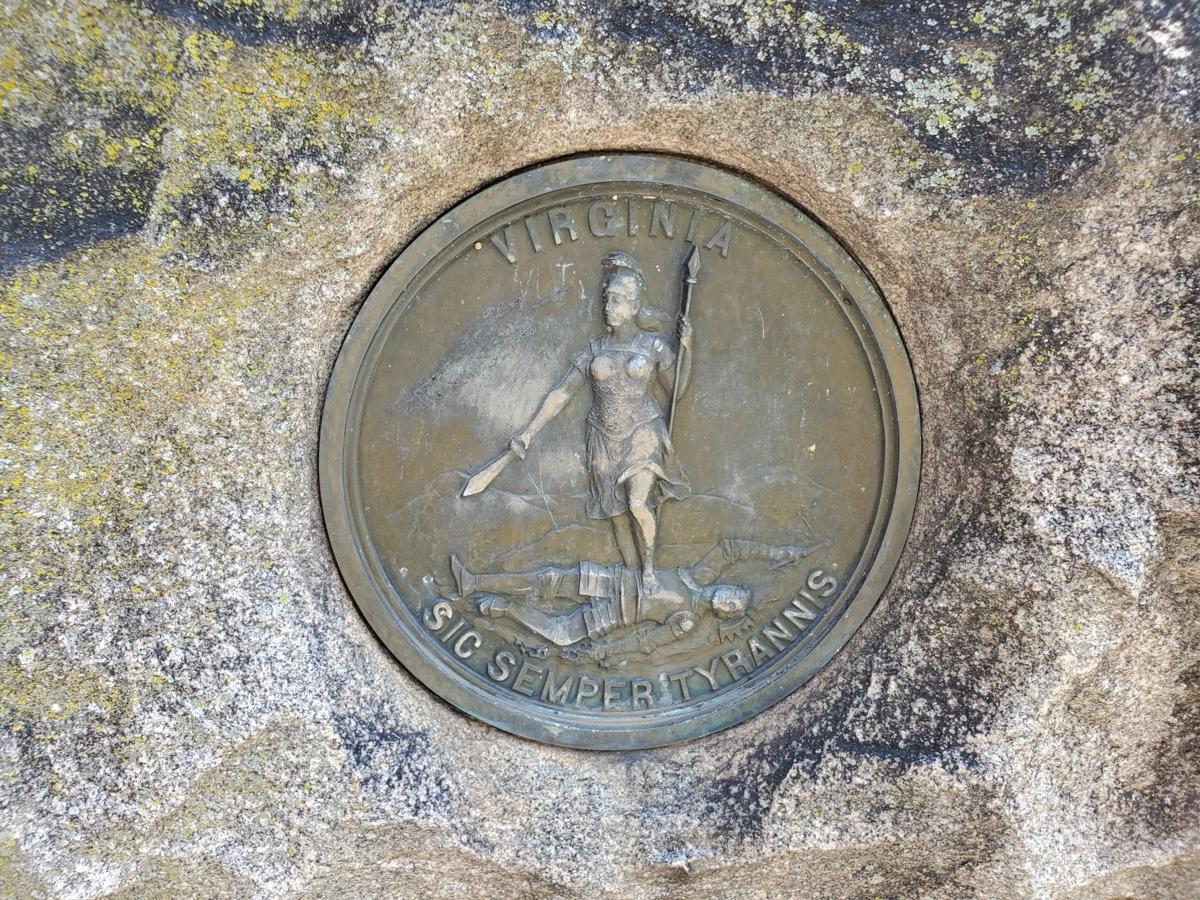 This bronze relief of Virginia’s state seal is embedded into the Confederate monument at the Culpeper County Courthouse. Its Latin motto declares “Thus always to tyrants.” 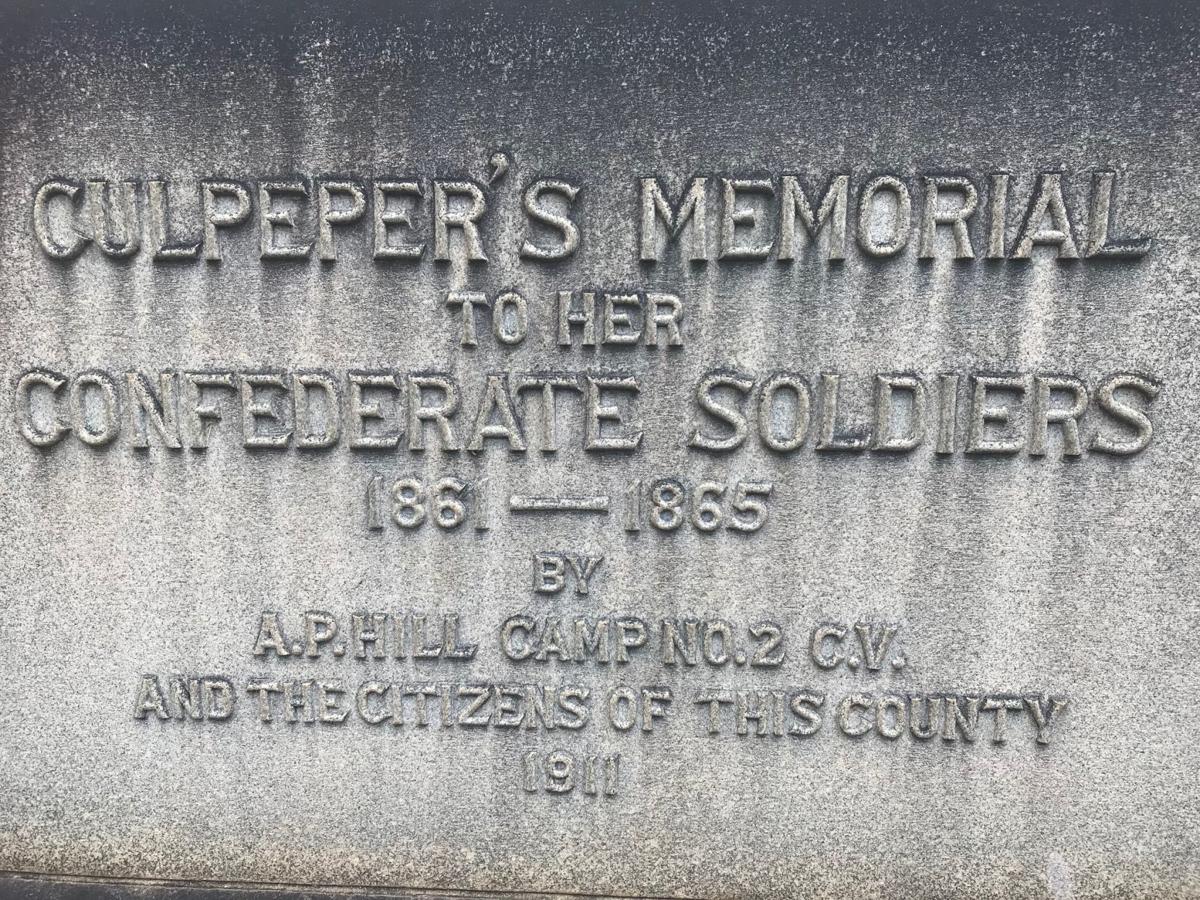 These words adorn the front of the Confederate monument next to the Culpeper County Courthouse.

A white Culpeper philanthropist is calling for immediate removal of the Confederate soldier monument that has stood tall for 109 years in the courtyard beside the Culpeper County Courthouse on West Davis Street—and he’s willing to pay to see it gone.

Jefferson Homebuilders President Joe Daniel, namesake of Germanna Community College’s Joseph R. Daniel Technology Center in Culpeper County, has offered the county up to $50,000 to remove the monument erected in 1911 by the A.P. Hill Camp No. 2 of the Confederate Veterans group in the Richmond area.

Hill was a Culpeper native and Confederate general. His boyhood home, an imposing brick structure at the corner of Davis and Main streets, is a half block from the monument.

“The soldier should be removed immediately!” Daniel told the Culpeper Star-Exponent on Thursday.

One side of the granite monument bears, in bronze, the circular seal of the Confederate States of America, as well as the date—Feb. 22, 1862—when Jefferson Davis became president of the Confederacy, on George Washington’s birthday. The seal bears the words “Deo vindice,” Latin for “with God as our protector,” the Confederate states’ unofficial motto.

Many statues like the one next to the Culpeper courthouse were built across the South during the Jim Crow era (from 1877 to the 1950s) to intimidate Blacks, send a message about white supremacy and sentimentalize Confederate soldiers, according to historians. Those authorities include American Historical Association Executive Director James Grossman and Harvard University professor Annette Gordon-Reed, who won the Pulitzer Prize for “The Hemingses of Monticello: An American Family,” her history of Thomas Jefferson and his enslaved people.

Seven years after “Culpeper’s Monument to Her Confederate Soldiers 1861-1865” was erected, a hooded mob took Allie Thompson—an 18-year-old Amissville resident—from the county jail next door and lynched him not far away.

If $50,000 is not enough to remove the monument from county-owned land, Daniel said, he’ll consider paying more.

“The statue needs to be removed,” he emailed County Administrator John Egertson on July 10, a communication distributed to members of the Board of Supervisors.

Chairman Gary Deal got the email. On Thursday evening, Deal issued a statement in response, saying he spoke for himself personally and not the rest of the board.

“I do support Mr. Daniel’s offer to move the statue to Civil War battlefield ground or another feasible location,” Deal stated. “I will also support working with our NAACP and local historians to add Black history in the courtyard area where the statue sits.”

Asked on Thursday what should be done with the Culpeper statue if it is taken down, Daniel said, “The statue should not be put in any place that it will be honored.”

Daniel and his wife, Linda, a medical doctor, have given millions of dollars to Germanna Community College. He has lived in Culpeper nearly 50 years and was born in neighboring Madison County.

A University of Virginia graduate, Daniel described as “unbelievable” the response by Culpeper’s supervisors to residents’ recent calls for removal of the Confederate battle flag from the county’s Lenn Park near Stevensburg.

As of Thursday, nearly 4,000 people had signed an online petition started by a Culpeper native seeking the battle flag’s removal. Numerous prominent Black Culpeper residents have intensified that call in recent days, calling it a symbol of hate. The county, meanwhile, says the flag flies on private property and it lacks the legal ability to remove it, after recently deeding that flagpole’s tiny plot of land at the park’s entrance back to Culpeper’s Lenn family.

Daniel said he believed the Board of Supervisors should have responded that “The Confederate flag is a symbol of hatred and ignorance and an insult to every African American and should be removed immediately and I will work to make it happen as soon as possible!

“It is unbelievable that experienced, educated, intelligent people could be still living in the delusion of the Lost Cause,” he said of one supervisor’s comment that the Civil War was about politics.

The American Civil War ravaged Culpeper County and led to the creation of its national cemetery, where hundreds of the Union soldiers killed during battles in the county lie at rest.

The nation’s deadliest conflict “was about keeping black Americans as slaves by rich white people whose opulent lifestyle depended on slave labor,” Daniel said. “And, every attempt was made to keep them from getting an education while living in horrible conditions at the beck and call of the ‘master,’ and subject to brutal beating for failure to comply with any command.”

He said that master-slave mindset was the strength of the nation’s Jim Crow era, which helped Americans’ racist behavior continue for at least 100 years after the war’s end.

“There are no statues to people who attempt to destroy a country!” Daniel said. “And, that is what we have in front of the Culpeper County Courthouse.”

Daniel said the people of Culpeper had little or nothing to do with the start of the war, but suffered mightily because of the treason of others, calling it, “Treason to preserve slavery. The Confederate flag is its symbol. Nothing to be proud of!”

According to Dr. Lonnie G. Bunch III, founding director of the Smithsonian Institution’s National Museum of African-American History & Culture, the majority of Confederate statues were built between 1885 and 1930. It was a time when issues of Black agency, urbanization and immigration began to threaten Southern white hegemony, he wrote in a 2018 column.

“These monuments, then, are concrete manifestations of a war for the soul of America, a war to preserve prejudice,” Bunch wrote.

Candidate Daniel Gade’s ad, “Sacrifice,” is a 30-second spot detailing the story of the medics who saved his life after a 2nd wounding in Iraq.

OC teachers speak of frustration, exhaustion at school board meeting

In a school division that prides itself on being a family, Monday’s school board meeting revealed a family in crisis. Five teachers expressed extreme frustration with a ballooning workload they feel they can never escape, and Curtis Harris of Locust Grove, a father of four, told members of the school board they need to take responsibility and help teachers and students deal with the huge challenges of virtual learning during the pandemic.

Which dog breeds are the most playful?

Gwyneth Paltrow opens up about co-parenting struggles with Chris Martin

Gwyneth Paltrow opens up about co-parenting struggles with Chris Martin

Protests erupt across U.S. after decision in Breonna Taylor case

Protests erupt across U.S. after decision in Breonna Taylor case

The Confederate States of America’s seal adorns one side of the Confederate monument on the lawn beside the Culpeper County Courthouse.

The Confederate battle flag decorates the front of Culpeper County’s Confederate monument, on the courthouse grounds.

This bronze relief of Virginia’s state seal is embedded into the Confederate monument at the Culpeper County Courthouse. Its Latin motto declares “Thus always to tyrants.”

These words adorn the front of the Confederate monument next to the Culpeper County Courthouse.