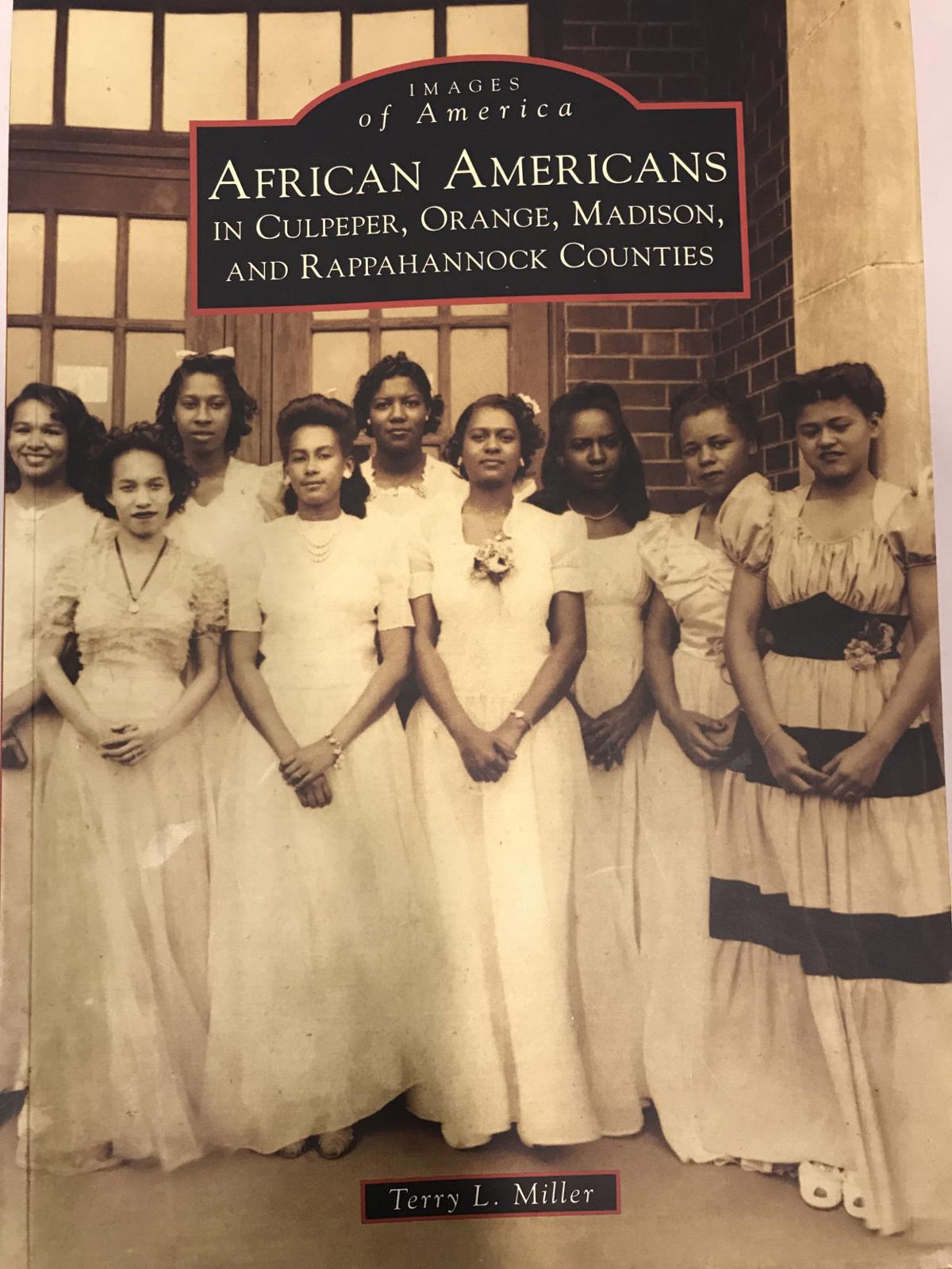 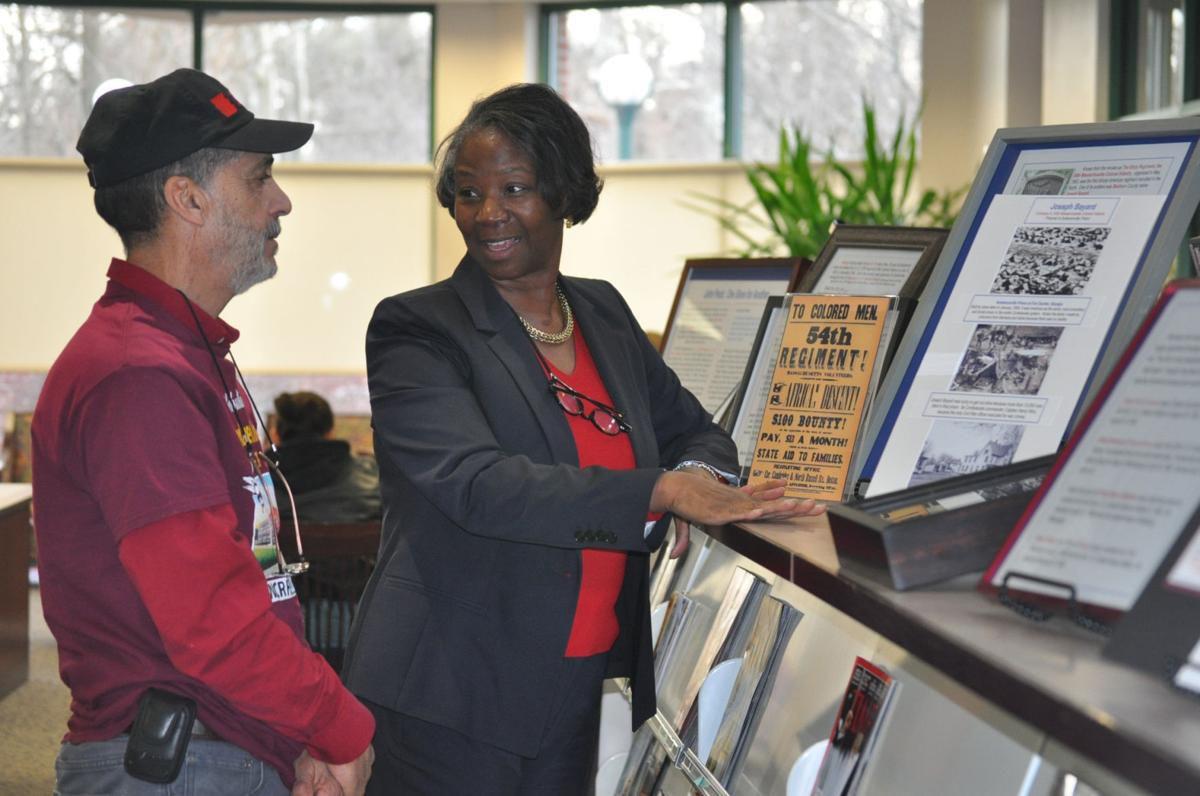 Terry Miller, at right, talks in 2017 with Carver School alumni Charles Jameson about the creation of her first exhibit for the school’s history museum, slated to open in February.

A new book by a Virginia author with strong local ties features dozens of vintage photos in visually telling the story, “African Americans in Culpeper, Orange, Madison, and Rappahannock Counties.”

Terry L. Miller, of Suffolk, authored the engaging local history spanning 1855 to 1955. It officially publishes Monday through the “Images of America” series of Arcadia Publishing. Full of photographs with succinct, well-researched captions that are easy to read and equally interesting, the seven-chapter volume examines where black Americans across the region made their homes, the professions they pursued, schools they attended, and where they worshiped, among other topics.

The idea for the book unfolded in 2016 when Miller was invited by the George Washington Carver Regional High School Alumni Association to develop a museum in the Culpeper school that educated the four county’s black students during segregation.

“As we were organizing the exhibits, I was amassing a bunch of research. When I go into a community I really like learning about it because I figure I can do my work better if I know more,” said the curator and author of two other Arcadia Publishing books about Spotsylvania County African Americans and one about Southampton County. As she worked on exhibits for the Carver museum, the data collection grew and grew.

“I realized I had enough for a book and really wanted it to be representing of all the counties,” said Miller.

With the blessing of the alumni association, Miller spent hours and days pouring over pension files, “enough to make you boohoo all day long” because of the stories she found within. Death and other records maintained in the National Archives, Virginia State University and The Library of Virginia were revealing in offering a look at the lives of local African-Americans.

Page 27 of the new 127-page book tells the cruel story of one Levi King, a blacksmith and farm laborer born 1838 in Culpeper. Born a slave, he was sold south, where he mustered to serve with the Union Army in 1864. While in the service, King fell victim to smallpox and was returned to slavery.

“He was entitled to a pension, but the person who had originally owned him wrote this cruel affidavit so Levi could not get his pension and he died a horrible death,” Miller said.

She also found stories of triumph in the death records she researched, including one with the name John Simon Ford, an area World War I veteran.

“What I liked about him is when he came back from the Army he went to Norfolk to go work because he had a desire to earn money,” Miller said.

A builder back home, Ford used his additional military skills to lead a successful career in shipbuilding.

“He would work all week and go back home to Culpeper on weekends, and he did that for years,” Miller said. “His wife was Ruth Robinson Ford and she taught at the Norman School.”

Mrs. Ford used her money earned teaching and her husband’s wages to put herself through school at Virginia Union University, eventually earning a bachelor’s degree.

Other information for “African Americans in Culpeper, Orange, Madison, and Rappahannock Counties,” came from the 1870 Census, the first such record to list the first and last names of African-Americans, newly free of slavery, Miller said. A common theme that emerged in her work was how the four counties regularly worked together to solve common problems.

“The leadership all knew each other so it was easy to talk back and forth. It was just always this kind of brotherhood,” said the author.

Her research revealed that of the four counties, Orange was the most progressive because of its early education system for black youth long before public education served the segregated population.

“Oh man, yes, I was shocked. Orange County had a form of African American high schools in their churches. Bethel Baptist in particular, had high school in the 1880s,” she said.

Culpeper County, on the other hand, was the last of the four counties to integrate its schools.

From the story of Dangerfield Newby, who died fighting with John Brown at Harper’s Ferry to free his enslaved wife, to the account of Andrew Maples, a Tuskegee airman from Orange whose plane went down over the Adriatic Sea in the summer of 1944, the new book brims with information about the extraordinary and every-day lives of area African-Americans.

Miller especially relished writing Chapter 4, “When They Made a Home,” and its many pictures of women.

“It was hard for women, especially when there was a death—they still had to make it and carry on,” she said.

Black women of the time were very adept at making their own money, Miller added, through sewing, laundering, cooking and other domestic tasks.

“My own grandmother got her sewing skills early because she had to—her mother died when she was 6. Then when she was an adult, she worked for WPA sewing uniforms for soldiers,” the author said, referring to the federal Works Progress Administration created by President Franklin Roosevelt.

Miller is pleased with the outcome of her latest book and its picture-heavy format.

“You can see a lot in the faces of the people,” she said. “I am very happy with it, and it’s for everybody. I think everybody can find something that they know in it. I still have a lot more to go into other books.”

“African Americans in Culpeper, Orange, Madison, and Rappahannock Counties,” is available for purchase at ArcadiaPublishing.com and on Amazon. Miller will give a Gallery Talk about the book at 5:30 p.m. on Feb. 8 in the Museum of Culpeper History. The history museum grand opening at the Carver Center will be held at 2 p.m. on Feb. 23.

Inside some of the world’s most unusual vaccination centers

Inside some of the world’s most unusual vaccination centers

Terry Miller, at right, talks in 2017 with Carver School alumni Charles Jameson about the creation of her first exhibit for the school’s history museum, slated to open in February.