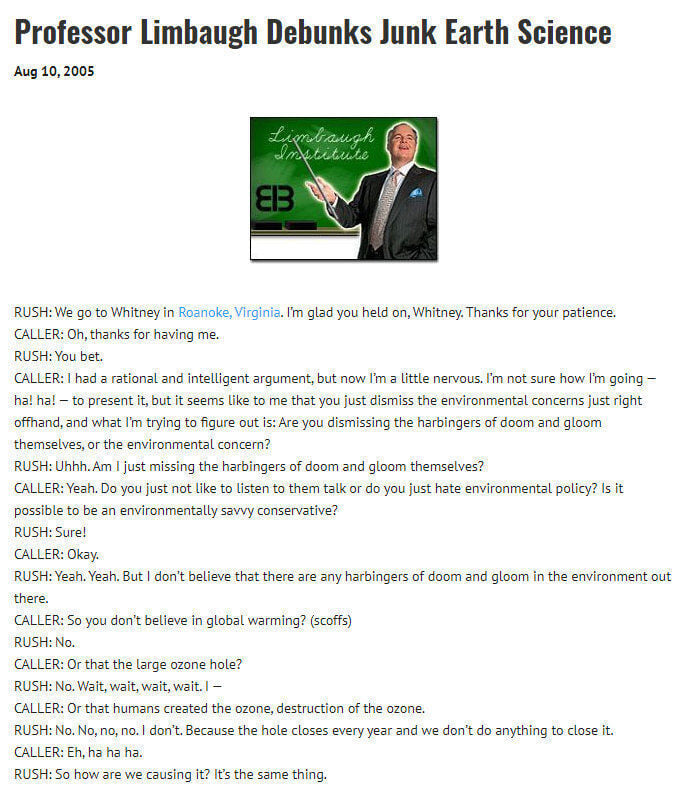 Transcript of the beginning of an Aug. 10, 2005, conversation between Roanoke resident Whitney Hollingsworth and the late radio talker Rush Limbaugh. | Screenshot from RushLimbaugh.com 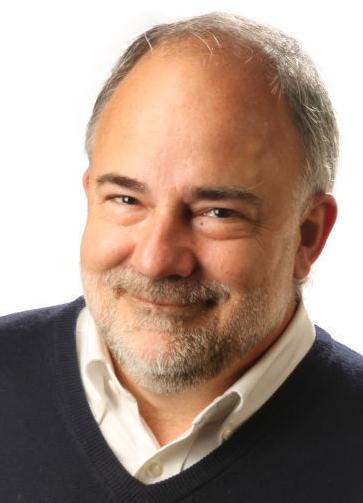 By Dan Casey | The Roanoke Times

Whitney Hollingsworth, 46, wears a lot of hats in life. The Hardy native is the eldest of four; she has three children herself. She holds a degree in religion and philosophy from Roanoke College.

She makes her living selling hearing aids; her spouse is a downtown restaurant owner (Table 50 on Market Street). They live in the Grandin Court neighborhood of Southwest Roanoke.

But in annals of “The Rush Limbaugh Show,” Hollingsworth may forever be known for another reason. As “Whitney in Roanoke,” she one day phoned the radio entertainer, whose show was carried locally on WFIR-AM 960. And she proceeded to call him out on his virulent anti-environmentalism.

Call it Whitney Hollingsworth’s “brush with Rush.” The transcript, which he later had an aide send her, is an entertaining read.

Limbaugh, 70, died last week after losing a battle with lung cancer. To call the conservative talker controversial would be an understatement. During a 33-year career on national radio, he left few dog whistles unblown, in terms of racism, sexism, homosexuality, transgenderism and more.

His passing left many sad and many glad.

That was reflected in tweets when news of his death broke. Many heaped accolades on Limbaugh’s long tenure and called him a hero. Others were less kind.

“You should never say bad things about the dead, only good,” one wag tweeted. “Rush Limbaugh is dead. Good!”

Hollingsworth doesn’t subscribe to such sentiments. She fondly remembers the day in 2005 she called into “The Rush Limbaugh Show” (although she initially thought it occurred in 1999). It was hardly a spout-off-and-hang-up affair. Their conversation lasted a quite a while.

It happened that August; at the time Hollingsworth was working in a Salem factory where the Rush Limbaugh show played daily. Some might regard that as an unfair labor practice. But in that workplace it wasn’t unwelcome, Hollingsworth said.

After an initial jitter or two, she kicked off the conversation with just a tinge of sarcasm.

So began a repartee that went on for more than 4,100 words. Hollingsworth estimated it lasted maybe five or six minutes. At one point, she recalled, Limbaugh carried her over a commercial break to continue. Judging by the transcript, he seemed charmed.

Later, the radio host counted it as among his “greatest hits.” Those were rebroadcast, occasionally, as “The best of Rush” when Limbaugh went on vacation, or took a day off for whatever reason. Sometimes they played years after the fact.

Hollingsworth told me Friday she was bowled over when someone in the radio talker’s studio answered her call at all.

“I was shocked,” she said, comparing it to a teenager who tries to win a prize in a local radio station contest. “They say, ‘the ninth caller wins’ but you never get through. I got through!”

For the record, she considers herself neither a Limbaugh lover nor hater, although “I didn’t believe a word he said.” Both her mom and dad, who still live in Hardy, listened to him “religiously,” she added.

“He was hilarious, he had his moments of being a very funny guy,” she told me. But, “he could take it to a dark place, too.”

Who can forget “Barack the Magic Negro,” a song Limbaugh played on the show during the run-up to the 2008 election of Democrat Barack Obama? Or that Limbaugh termed the biracial president “a halfrican American?”

Another low occurred in 2012, when Limbaugh derided Sandra Fluke, then a Georgetown University student. He called her “a slut” and a “prostitute” after she advocated to Congress for birth control as part of universal health coverage.

Or how about 2003, and the Donovan McNabb affair? Moonlighting as an ESPN commentator, Limbaugh suggested McNabb’s success as the Philadelphia Eagles quarterback was “due to a little social concern in the NFL. The media has been very desirous that a black quarterback do well.”

By that point in his career, McNabb was a three-time Pro Bowler who’d led the Eagles to two consecutive NFC Championship games. (Limbaugh resigned the ESPN gig shortly thereafter.)

The Limbaugh-Hollingsworth confab on the environment was broad and far-ranging, and they talked over each other a bit. One of the subjects they touched on was ozone. At one point, Limbaugh (who probably knew better) conflated ground ozone (i.e. smog) with the protective ozone layer in the upper atmosphere, which filters out cancer-causing ultraviolent radiation.

Hollingsworth responded with a dig: President Ronald Reagan, one of Limbaugh’s political heroes, had signed the Montreal protocol, which vastly curtailed gaseous chemicals that were destroying upper-atmosphere ozone, she noted.

“It’s all irrelevant to me,” Limbaugh shot back.

Another topic they broached was local to Western Virginia: The Jackson River near Covington, and that city’s biggest employer — in 2005 it was MeadWestVaCo.

“I live near a paper plant,” Hollingsworth said.

“It’s on the Jackson River, and if you want to fish, you’ve got to fish above the plant,” Hollingsworth said. “If you fish below the plant [downstream], there are no fish.”

“But there are fish if you go above it, right?” he said.

“Okay so, the fish are smart enough to go where they can survive,” Limbaugh countered.

“Wouldn’t you think there’s something about the plant that’s killing the fish?” Hollingsworth said.

In the bigger picture of their conversation, Limbaugh let fly a cockamamie theory, and at its heart was an answer to the first question Hollingsworth had posed.

Basically, Limbaugh held great antipathy for environmentalists. He claimed they were communists who’d regrouped and rebranded themselves in a fiendish strategy to conquer the world and control people’s lives.

For 2005, that was far out there. But it might be a measure of Limbaugh’s lasting influence that today, his theory is accepted as bedrock fact by much of the far right. Which ought to leave you weeping, because it’s so ridiculous.

Anyway, over the years, Hollingsworth has been reminded of their conversation every now and then when she happened to catch a rerun of “The best of Rush.”

The last occasion, she was sitting in her car at Fishburn Park, along Brambleton Avenue, eating a sandwich. Suddenly over the radio she heard Limbaugh introduce “Whitney in Roanoke.”

“I almost choked,” she said.

Metro columnist Dan Casey had a run-in with the Rush Limbaugh show back in 1992, when Rush's then-producer, Kit Carson, invited him on the show. Read more here.

Deal reached to get Calif. kids back in classrooms

Transcript of the beginning of an Aug. 10, 2005, conversation between Roanoke resident Whitney Hollingsworth and the late radio talker Rush Limbaugh. | Screenshot from RushLimbaugh.com 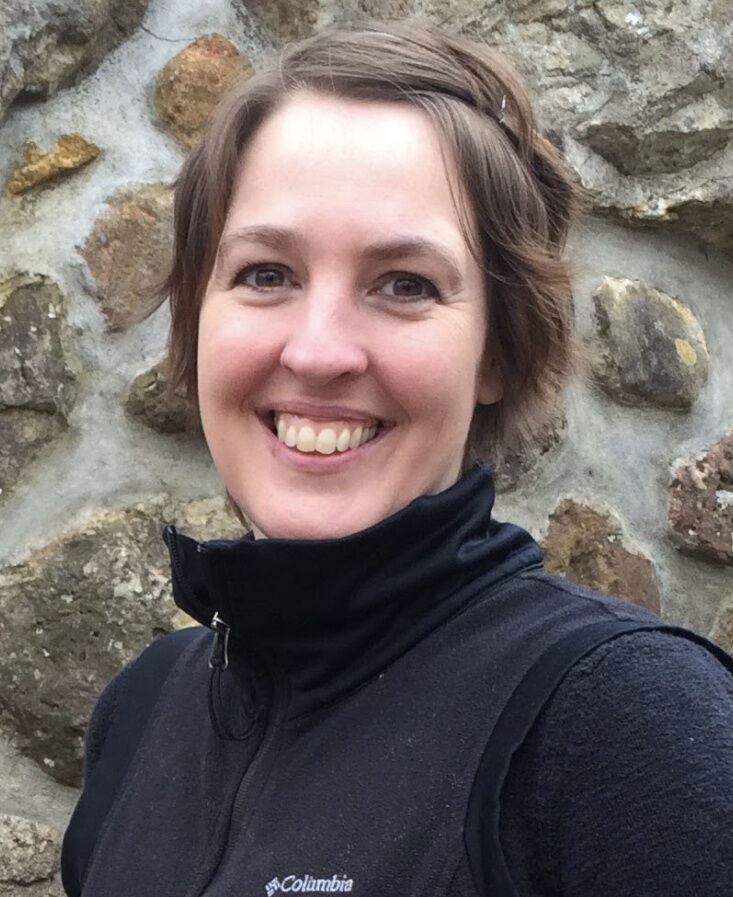