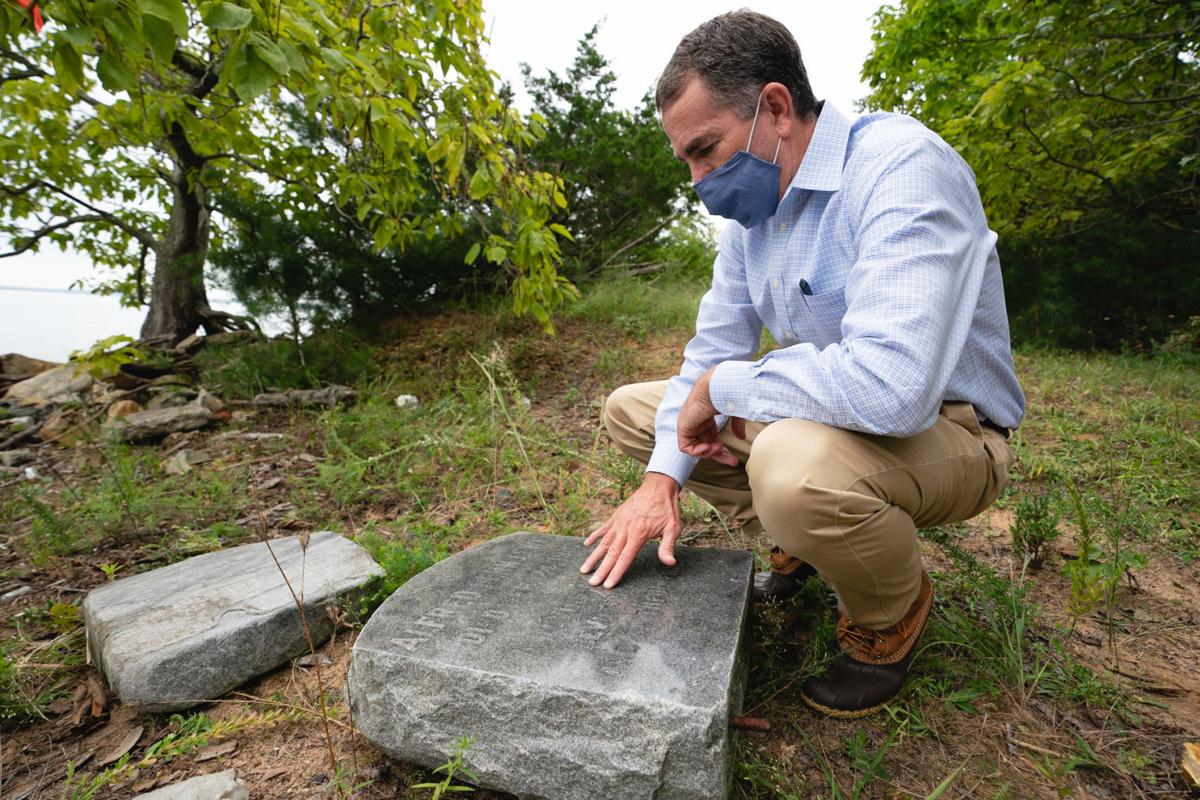 Virginia Gov. Ralph Northam examines one of the first gravestones recovered from the Potomac River shore on state Sen. Richard Stuart’s farm. It came from D.C.’s Columbian Harmony Cemetery, and was used as erosion-control riprap. 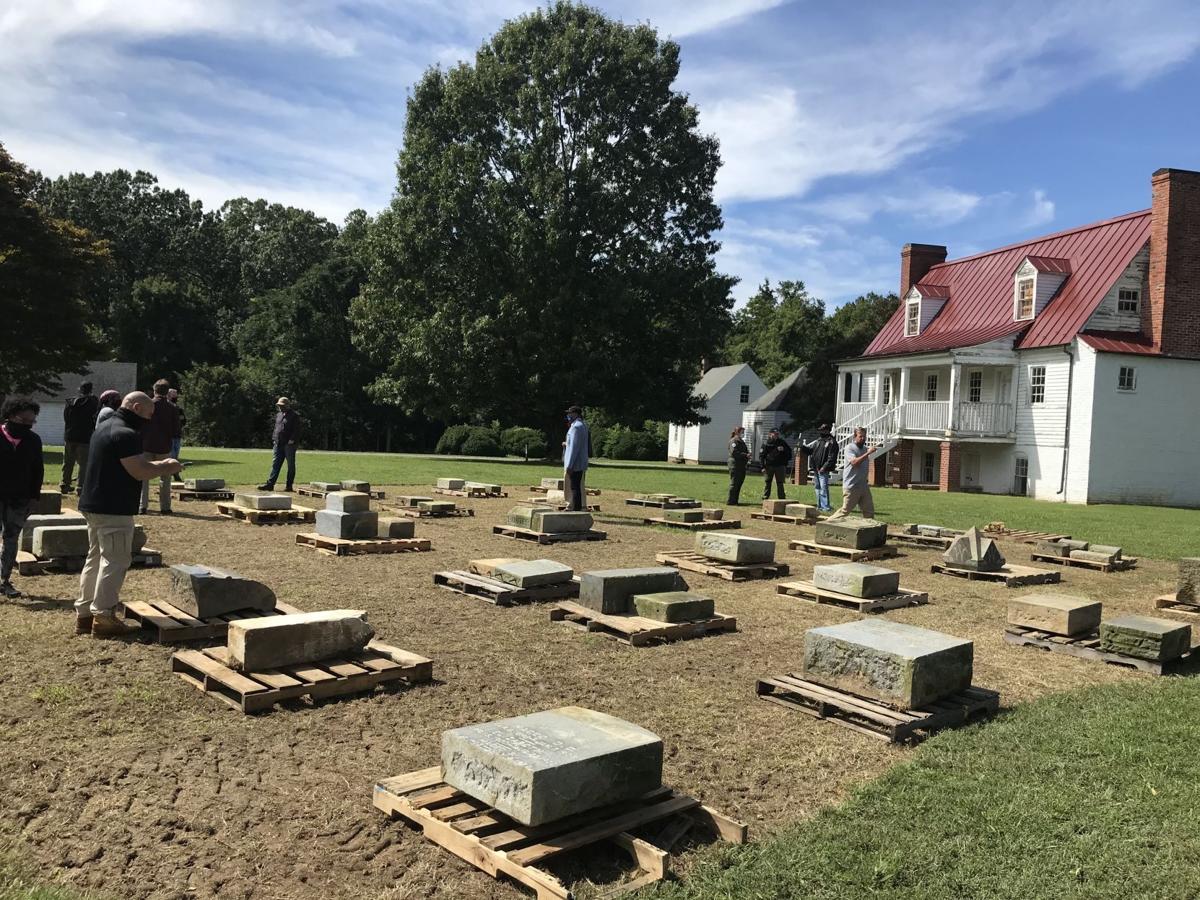 Volunteers and visitors eye gravestones recovered in September from a King George County farm’s Potomac River shore. The stones, originally from Washington’s historic Harmony Cemetery, are being stored at Caledon State Park next to a 19th-century plantation house. 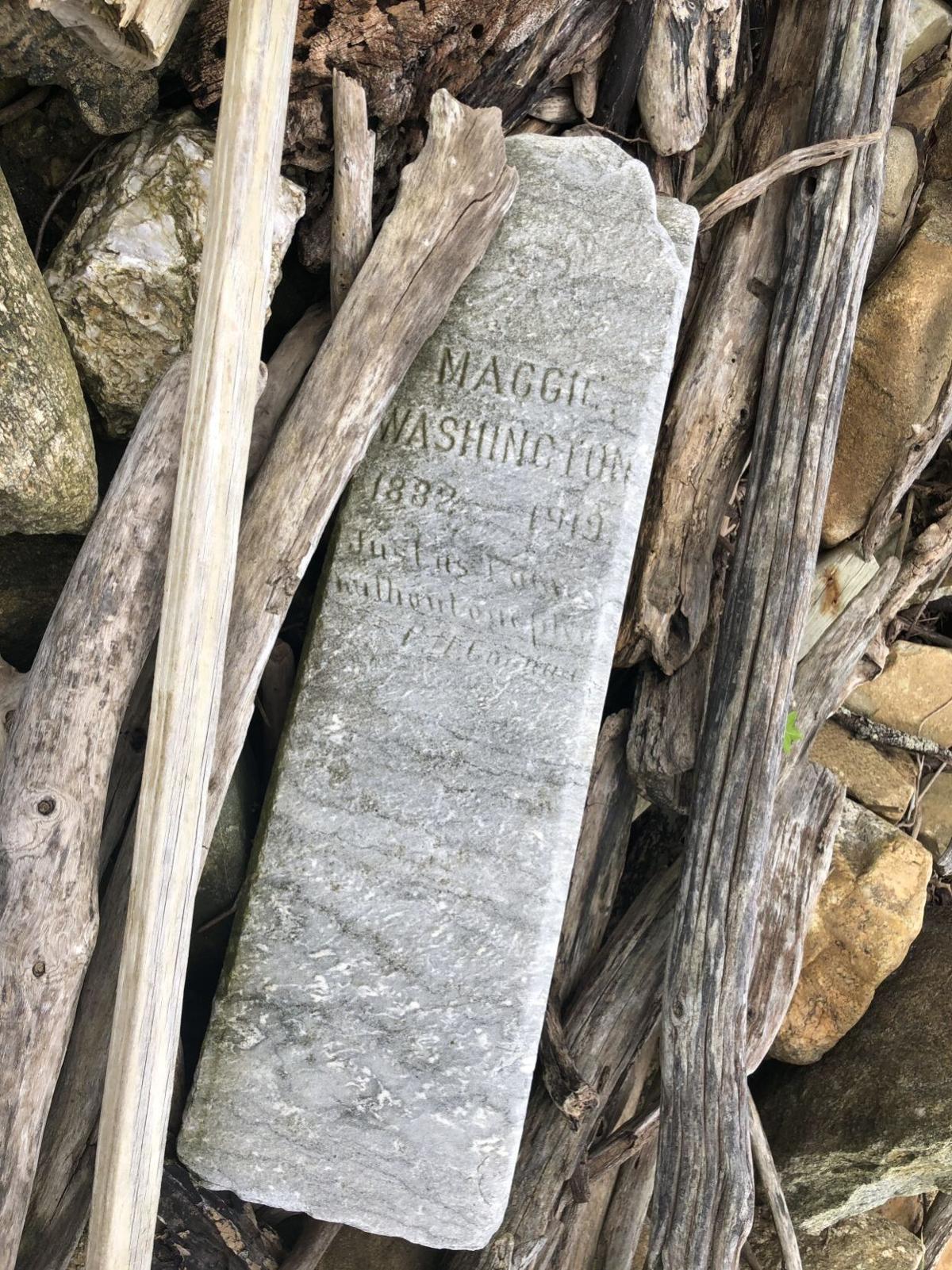 The gravestone of Maggie Washington, born in 1882, lies amid driftwood along the Potomac River shore in King George County, Va. 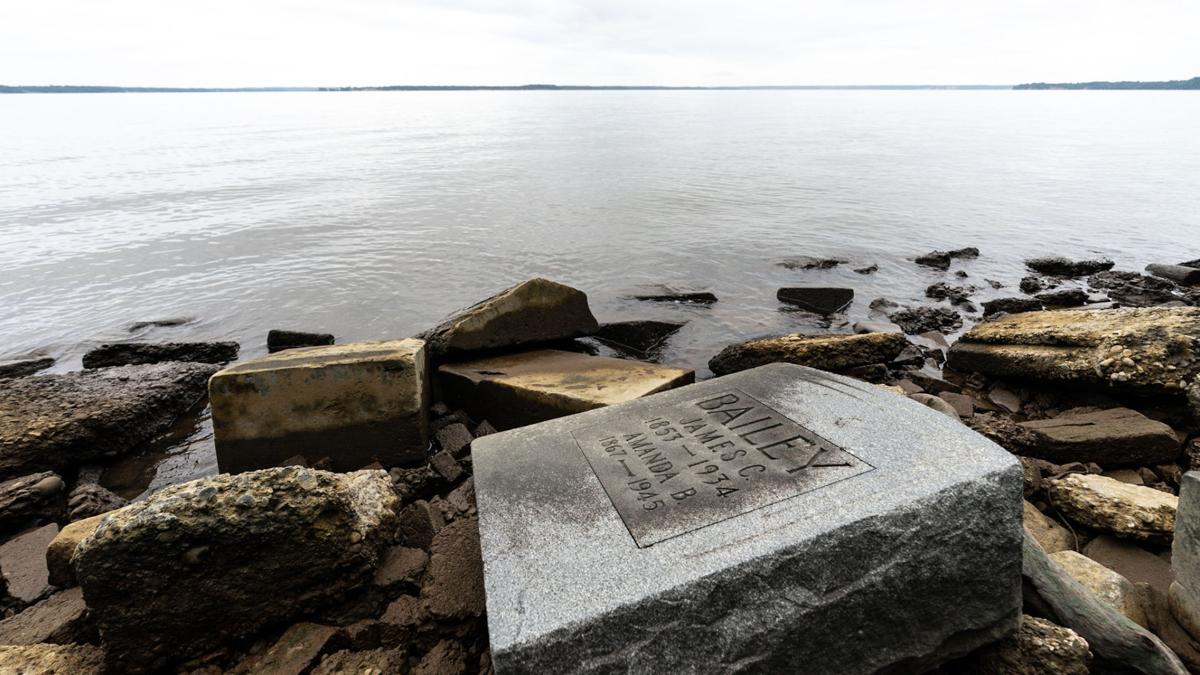 The gravestone of James C. and Amanda B. Bailey from Columbian Harmony Cemetery is part of the riprap beside the Potomac River near Dahlgren, Va.

“CBS Sunday Morning” plans to air a news segment on Virginia’s $5 million project to restore dignity to Black people’s gravestones stripped from a historic D.C. cemetery and dumped as riprap along the Potomac River, state officials said this week.

In 1960, a developer removed hundreds, perhaps thousands, of headstones from Washington’s Columbian Harmony Cemetery, resting place of Frederick Douglass’ son Charles and other African American luminaries who lived in and around the nation’s capital from 1825 onward. The stones were trucked to Virginia and strewn along two miles of shoreline near the Dahlgren naval base to retard erosion of the homeplace of the trucking company’s owner.

Fast forward decades to the day when the property’s current owner, state Sen. Richard Stuart, noticed one of the chiseled stones while walking the riverbank, then alerted a state official to the discovery.

As a first step in that work, volunteers labored mightily in September to remove more than 50 gravestones from the riverbank and place them carefully in nearby Caledon State Park so project supporters and descendants of the cemetery’s residents could see them as they were cleaned, catalogued and prepared for transport to Maryland.

Northam visited Stuart’s farm and Caledon on the first day of their work to encourage the effort and returned last month to see the recovered headstones with a camera crew after CBS News expressed interest in the project for a Black History Month story. The “CBS Sunday Morning” segment is scheduled to air at 9 a.m., a spokesman for the Virginia Department of Conservation and Recreation said.

“Virginia has a long and complicated history,” Northam told the Culpeper Star-Exponent on Thursday. “As we reckon with the many impacts of systemic racism, it’s important that we tell the full and true story of our shared past, and the indignities—and worse—that were inflicted on people of color. We must work to rectify old wrongs when we can. The Harmony Cemetery project is one example of that, and I am glad that we can be part of this important work.”

Visitors to Caledon can view the gravestones, laid out in neat rows arrayed east and west per traditional custom, next to a 19th-century plantation house and kitchen outbuilding where enslaved people once cooked and lived. Interpretive signs tell visitors a bit about Harmony Cemetery and the work to restore its tombstones.

The stones will be moved later this year to National Harmony’s 100-acre cemetery in Landover, which sits in the shadow of FedEx Field, home to the Washington Football Team.

For more than a century, Columbian Harmony was the final resting place of the capital’s most-respected Black residents. Among them were Paul Jennings, the enslaved servant to President James Madison who saved George Washington’s White House portrait from being sacked by British troops in 1814; Elizabeth Keckley, Dinwiddie, Va.-born dressmaker and confidante of first lady Mary Todd Lincoln; Philip Reid, the formerly enslaved Maryland man who figured out how to cast the giant bronze statue of Freedom that tops the U.S. Capitol’s dome; and about 400 Black veterans of the Union army during the American Civil War.

Thousands of the cemetery’s graves were excavated and relocated in 1960 to make way for commercial development of the cemetery site, including Metro’s Rhode Island Avenue-Brentwood station and its neighboring stores and condominiums.

But only some of the bodies’ headstones made the journey to the new burial ground in Maryland.

The Virginia money pledged by Northam would finance removing as many headstones as possible from Stuart’s shoreline and transport them to National Harmony, where they will be given places of honor.

“I was horrified when I discovered the headstones from Columbian Harmony Cemetery scattered along two miles of shoreline on the Potomac River,” Stuart said in a statement. “With the help of this funding, we will be able to return many of these to a better and more respectful resting place while creating a memorial to remember those that we are unable to remove. I deeply appreciate the governor’s help in righting this terrible wrong.”

Virginia Gov. Ralph Northam examines one of the first gravestones recovered from the Potomac River shore on state Sen. Richard Stuart’s farm. It came from D.C.’s Columbian Harmony Cemetery, and was used as erosion-control riprap.

Volunteers and visitors eye gravestones recovered in September from a King George County farm’s Potomac River shore. The stones, originally from Washington’s historic Harmony Cemetery, are being stored at Caledon State Park next to a 19th-century plantation house.

The gravestone of Maggie Washington, born in 1882, lies amid driftwood along the Potomac River shore in King George County, Va.

The gravestone of James C. and Amanda B. Bailey from Columbian Harmony Cemetery is part of the riprap beside the Potomac River near Dahlgren, Va.