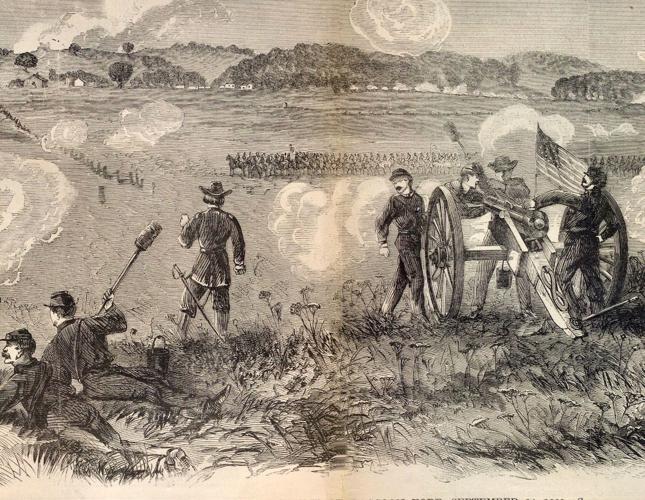 A portion of a Civil War lithograph depicts Union artillerymen attacking Confederate units at Culpeper County’s Raccoon Ford on the Rapidan River in September 1863. The area is now proposed to be developed for industrial-scale solar energy facilities. 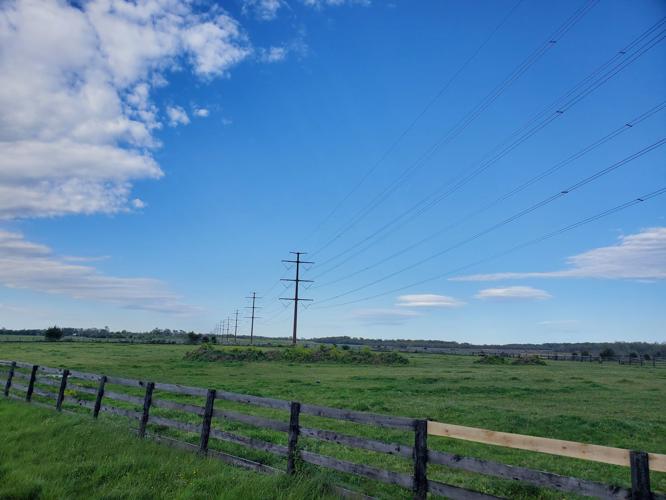 Seen from Blackjack Road in Culpeper County, these fields near Stevensburg could be covered by solar panels if NextEra builds its planned solar-energy plant. A high-voltage Dominion power line crosses the site.

A long-established Culpeper-area citizens group has stepped into the fray over a 1,000-acre solar-energy facility planned near Stevensburg.

The Friends of Cedar Mountain Battlefield, steward of part of that 1862 Civil War site, is asking Culpeper leaders to delay the county’s consideration of the project until it can finish an ongoing historical study of the area proposed for solar development.

On Monday, the all-volunteer friends group wrote the Culpeper County Planning Commission and the county Board of Supervisors asking them to halt the Greenwood Solar project so it can continue its study and learn if it will receive a federal grant this fall.

Development of the Greenwood Solar plant, which the Board of Supervisors approved in late 2018, “would create an integrity hole in the center” of the friends’ study area that could jeopardize other sites from being recognized as historic, the group said.

In January, the friends applied to the National Park Service’s American Battlefield Protection Program for a grant to fund research on what it’s calling the Rapidan Front, largely undeveloped land where the battles of Raccoon Ford, Morton’s Ford and Somerville Ford were fought and where elements of the Union army camped in the winter of 1863-64. The program is expected to announce its grant awards in August or September.

This study continues research begun in 2016 to identify threats to the Culpeper area’s nationally significant Civil War battlefields and cultural and agricultural landscapes, the friends said.

“If the (Greenwood) project proceeds as presented at this time without consideration to the historical and cultural value of the land it encompasses, it will render the area ineligible for National Register of HIstoric Places consideration not only for important Civil War sites but Colonial, African-American and Native American as well,” Diane Logan, president of the Friends of Cedar Mountain Battlefield, told the Culpeper Star-Exponent.

The friends group was raising private funds for its research in advance of the ABPP grant, but the COVID- 19 pandemic has temporarily halted that effort, Logan wrote Culpeper officials. “But we are committed to proceeding with this project as soon as possible,” she told them.

“We urge Culpeper County officials to put a halt to all industrial-scale projects on agricultural land, specifically the sites impacted by our grant application,” Logan wrote the governing board and Planning Commission. “We cannot lose our historic landscape, including the Union Winter Encampment boundary. Once the land is gone, it is gone forever.”

The ABBP grant would finance research to develop and enhance Culpeper historical tours, including landscapes and venues, and support agriculture, Logan told the Star-Exponent.

The study would highlight the importance of farming in Culpeper then and now, she said.

“It is the oldest business in our county and the most sustainable, not only for the health and welfare of our citizens but for growth and development,” Logan said. “Not to mention, agriculture has preserved the beautiful vistas that we enjoy today.”

The Rapidan Front research is documenting the historic resources of the encampment and the Rapidan, Raccoon Ford, Morton’s Ford and Somerville Ford battlefields, she said.

The project would open more resources for heritage tourism, a valuable industry that lures many visitors to Culpeper, and create economic development opportunities for small businesses such as campsites, water recreation and guided tours, the friends group wrote the boards’ members.

“FoCMB is aware of development threats to Culpeper’s historic landscape, particularly from potential industrial-scale solar facilities and housing development that would directly affect the outcome of the 2020 grant application,” it cautioned. “Such development would result in loss of landscape integrity that would render much of the Rapidan Front as no longer National Register-eligible.”

A newer Culpeper-area group that has been fighting industrial-scale solar development in Culpeper County praised the Friends of Cedar Mountain Battlefield’s effort.

“Citizens for Responsible Solar applauds the efforts of Friends of Cedar Mountain Battlefield to preserve the land. We stand with them in opposing the development of this historic site beyond what it is zoned for, which is agriculture,” Citizens for Responsible Solar President Susan Ralston told the newspaper. “Industrial-scale solar has its place on land zoned for industrial use, marginal or contaminated land or land which is sparsely populated.

“The Greenwood Solar site is part of the land identified in the Friends of Cedar Mountain Battlefield’s grant application and is already a well-documented historic treasure,” Ralston said.

In 2016, Friends of Cedar Mountain Battlefield met with its regional partners to discuss threats to Culpeper’s historic lands and identify priorities for preservation. Threats to its battlefield landscapes range from housing subdivisions to industrial-solar development to other utility projects, they determined. Looking forward, they set goals for heritage tourism, education, preservation and stewardship.

The Greenwood solar project was approved just before midnight on Oct. 2, 2018, after a three-hour public hearing. The Board of Supervisors voted 3-2 to grant a conditional-use permit for Florida-based NextEra Energy Resources to build and operate its utility-scale solar project on up to 1,000 acres near Stevensburg. NextEra acquired the project from Texas-based Greenwood Energy.

Remington woman dies in crash with dump truck on Route 29

The driver of the PT Cruiser, Diana E. Esry, 62, died at the scene of the crash due to her injuries.

On most weekends, Tyre Nichols would head to the city park, train his camera on the sky and wait for the sun to set.

Earth's inner core may have stopped turning and could go into reverse, study suggests

Scientists are weighing in on what it might mean.

A new amendment to allow the raising of chickens in residential zoned areas may not cross the road after all.

A former deputy in Culpeper has also announced his candidacy, stating, "I am a conservative Christian running for Sheriff in Orange County."

Fireball Cinnamon has been sued over “purposefully misleading packaging,” according to reports.

A portion of a Civil War lithograph depicts Union artillerymen attacking Confederate units at Culpeper County’s Raccoon Ford on the Rapidan River in September 1863. The area is now proposed to be developed for industrial-scale solar energy facilities.

Seen from Blackjack Road in Culpeper County, these fields near Stevensburg could be covered by solar panels if NextEra builds its planned solar-energy plant. A high-voltage Dominion power line crosses the site.