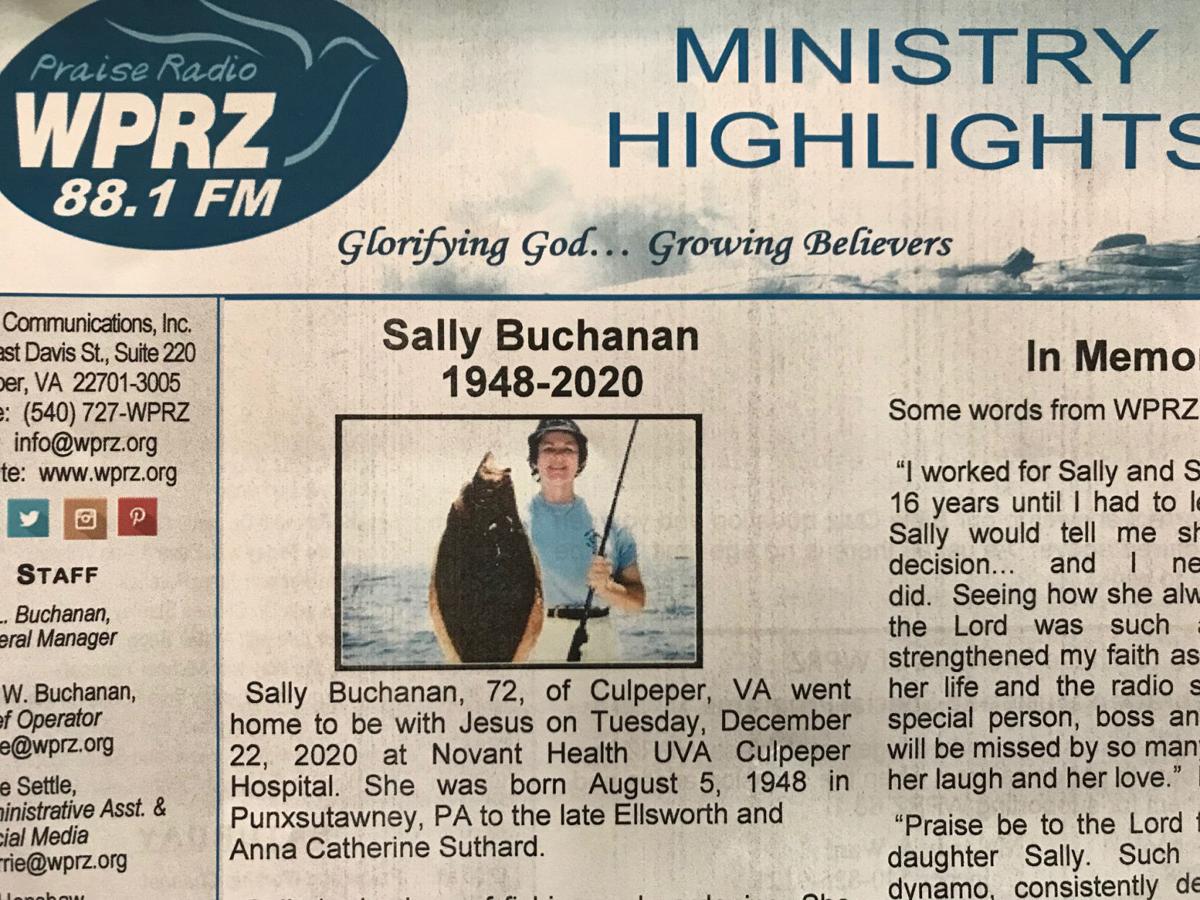 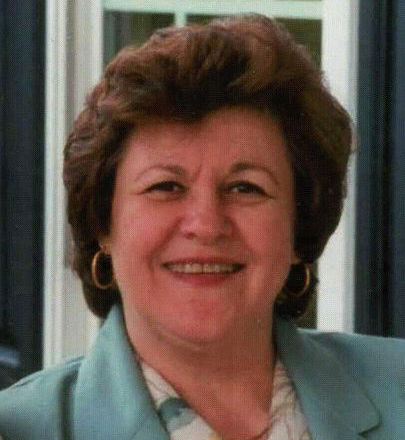 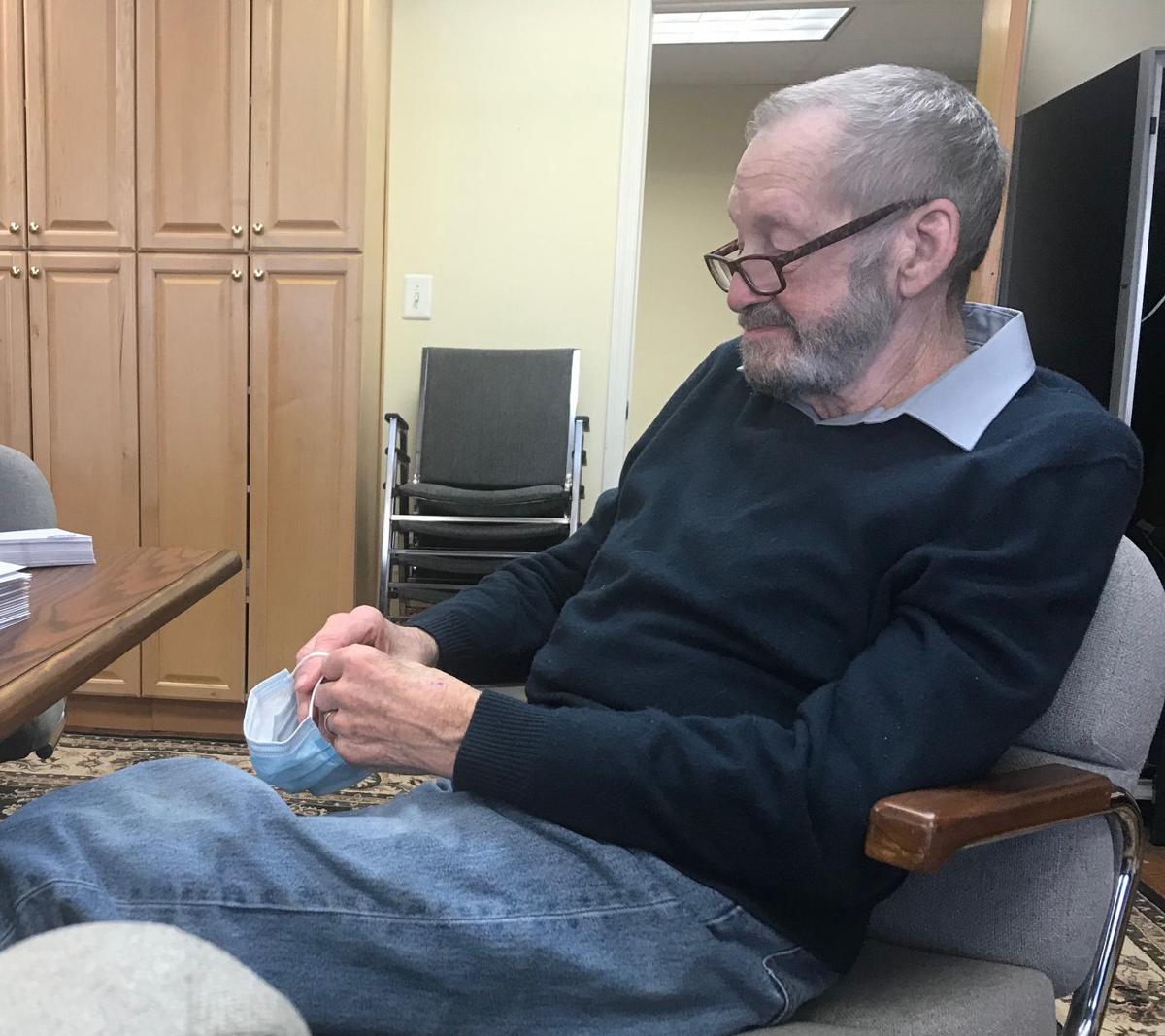 Steve Buchanan was married to WPRZ 88.1FM general manager Sally Buchanan for 53 years. Here he listens as friends and co-workers remember her legacy in a recent meeting at the East Davis Street station. Sally, at age 72, died Dec. 22 from COVID-19.

Kathy Flippo (from left), Carrie Foscato and Steve Buchanan remember Sally Buchanan, a local Christian radio pioneer and general manager at WPRZ in Culpeper, during a recent meeting at the downtown station. Sally died Dec. 22, 2020 from COVID-19 at Culpeper Medical Center. She was 72. Buchanan was married to Steve for 53 years.

She worked in the business some five decades, including the past 10 years as the intrepid, even-mannered station manager at WPRZ 88.1 FM on East Davis Street in downtown Culpeper.

Buchanan unexpectedly died on Dec. 22, 2020, at Culpeper Medical Center. She was 72. Sally died from COVID-19 following a brief illness, according to Steve Buchanan, her husband of 53 years.

“Her passion was running this radio station, glorifying God and encouraging believers in the Lord every day,” Steve Buchanan said in a recent meeting at WPRZ with friends and co-workers. “Her passion was to share Jesus with everyone she knew and she did that through radio.”

He met Sally, a native of Punxsutawney, Pa., on a blind date. She was 18 and staying at her sister’s house in Fairfax, next door to a friend of his. Steve Buchanan, an Air Force veteran, was 21 and had just returned from service in the Vietnam War.

“She was beautiful. She had that beautiful smile and that accent,” he said.

Sallly Buchanan started her long career in radio in the mid-1970s at a secular station in Arlington and later worked for a Fairfax station owned by the LBJ Corporation of President Lyndon B. Johnson, Steve Buchanan said. She worked for the former first lady, Lady Bird Johnson and their son-in-law Chuck Robb, who was running for Virginia governor at the time, Buchanan said.

At the station, Sally Buchanan introduced what her husband said was the first Christian program on secular radio.

“It was in the early 80s and it was called, Begin Your Day With Love, about four hours of music early in the morning,” Steve Buchanan said. “Some of the contemporary artists at the time used to bring their LP albums by to get her to play them.”

In 1980, he and Sally moved from Northern Virginia to Jeffersonton in Culpeper County, and started a family. Besides her husband, she left behind three children, seven grandchildren and four great-grandchildren.

The couple also went into radio together, founding Praise Communications in 1982 in Warrenton, broadcasting on the dial as 1250 AM. The couple sold the AM station in 2007 at the height of its value for around $2 million, including property, Steve Buchanan said.

That money helped start up the FM initiative downtown. In 2010, 88.1 FM went on the air in Culpeper, reaching an audience from Fredericksburg to Gainesville, to Winchester and Rappahannock, Madison, Charlottesville and areas of Orange.

The Praise Radio station broadcasts original programming and sermons as well as local talk radio and Christian music including bluegrass, country and contemporary, broadcasting locally and around the world from wprz.org.

Sally Buchanan ran the operation, with much experience, every day in a manner that was calm, caring and authoritative, her widower said.

Shelley Burnham started working for Sally in the 1980s as a teenager in the Warrenton station, and maintained a lifelong relationship with the station manager. Losing Buchanan, a mentor for many, is hard, Burnham said, breaking down during the recent meeting.

“I will remember her love for the Lord and reaching the community for Christ,” she said. “This is like family,” Burnham added. “The station has been a huge part of my life and my family’s life.”

Kandy Flippo worked 16 years in the office at the station until her recent retirement in May.

“Sally was tough and she had her way of doing things, but I didn’t mind that. She’s a leader, I’m a follower,” Flippo said. “We never had a cross word. I loved her so much. Integrity is the word that comes to mind for me for Sally.”

Sometimes money got tough at the small station, the former administrative assistant said, but Sally never lied about it.

“She never said the check’s in the mail unless the check was in the mail. She was just so honest to people, such a good example for me,” Flippo said. “God will get us through, she always said, and he did every time.”

Sherrie Settle met Buchanan during jury duty eight years ago and has been working at the station since Flippo left.

“You know where she’s coming from, and she was always calm when others were upset,” Settle said.

When Buchanan was anxious about something, her co-workers said, she would sigh—a lot.

“Sally has sighed 15 times—something was going on. She’d say, oh my, but never raised her voice,” Settle said. She recalled the many, many personal notes and cards Sally organized to radio station supporters: “She would write notes to listeners who were having a hard time in life. She had us do typed thank you notes that she signed,” Settle said.

Steve Buchanan estimated thousands of such cards were put in the mail during his wife’s decades in radio, having unmeasured impact.

“If you could read some of the notes and letters sent to listeners and to us you’d understand better what this radio station means to so many people—it’s their life, some older folks don’t know what they would do without it so we’re here for them,” he said.

Carrie Foscato grew up listening to children’s programs on Buchanan’s AM station that her parents supported and got her first full-time job working at the station. She has volunteered on and off since.

“They are a second set of parents,” Foscato said of the station owners.

“Sally was very creative, not just like a businesswoman, so multi-faceted, a one-man band, gardener, fisherwoman, she made everyone else look lowly,” she said, laughing. “She would get up at 5 every morning listening to music, get the day started.”

Sally Buchanan ran the day-to-day at the station, picked the music and she got on the air sometimes.

“Our heart has always been for local radio,” Steve said. “This is the only standalone FM that I know of in Virginia doing Christian broadcasting.”

Sally Buchanan lived a vibrant life and touched many. She worked to the end, too, her life ending quickly from an unforgiving novel virus, her physical presence suddenly gone from the halls of the upper floor radio station. Her husband doesn’t know how Sally Buchanan caught COVID-19. At high risk for her age and as a Type 2 diabetic, she tested positive on a Tuesday and was in the hospital by that Friday.

“She was gone within five days,” Buchanan said. “They gave her medication to go home and she was back in the hospital with an oxygen level of 35 percent. They sedated her, put her on a ventilator and she never woke up. She went home to be with Jesus.”

He knew his wife was sick.

The experience of being separated from his wife at her death and her sudden passing has been heart-wrenching, he said.

“But I have the assurance, which helps me get through every day, that God knew the day she was born and the day he was going to take her so it was her appointed time to go. And he took her to be with Him,” Steve Buchanan said. “If I didn’t have that comfort I would be in utter despair. She’s in the arms of Jesus.”

He contracted COVID at the same time, and experienced flu-like symptoms for about two weeks. Buchanan has recovered while his wife did not survive it. Support from many avid listeners and station supporters since Sally’s death has been uplifting, Steve said.

December was a record month financially with all the support coming in, he said.

“The outpouring of love and support for Sally and me and this ministry is incredible,” Buchanan said, vowing the station would continue to broadcast on the air waves. “We have more resolve to continue and grow than we ever have.

“We’ll miss her,” he added. “You can’t replace a Sally. But her heart’s desire was to see that this radio station continue and that’s going to be our heart’s desire, to make sure that it does.”

A public memorial service for Sally Buchanan will be held at a later date, when it is safe to do so.

“It’s such a shock to all of us,” said her husband. “It’s a hole in your heart that only can be comforted through the Holy Spirit and the love of friends and all the people we’ve touched over 40 years. That makes what we do all worthwhile.”

Can CO2 be transformed into jet fuel?

A man who sexually molested a 12-year-old Spotsylvania County boy in 2019 was ordered Monday to serve 12 years in prison.

Steve Buchanan was married to WPRZ 88.1FM general manager Sally Buchanan for 53 years. Here he listens as friends and co-workers remember her legacy in a recent meeting at the East Davis Street station. Sally, at age 72, died Dec. 22 from COVID-19.

Kathy Flippo (from left), Carrie Foscato and Steve Buchanan remember Sally Buchanan, a local Christian radio pioneer and general manager at WPRZ in Culpeper, during a recent meeting at the downtown station. Sally died Dec. 22, 2020 from COVID-19 at Culpeper Medical Center. She was 72. Buchanan was married to Steve for 53 years.