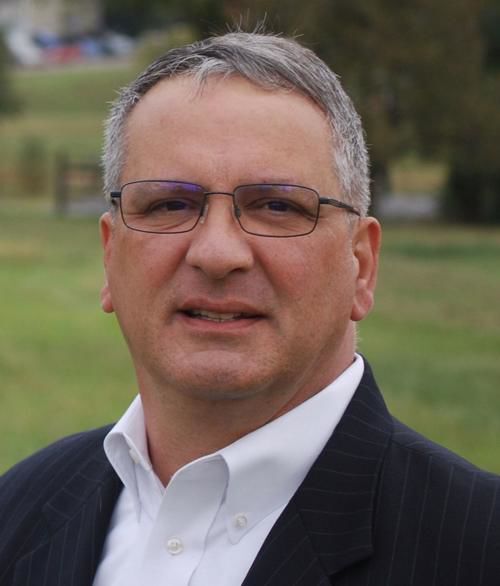 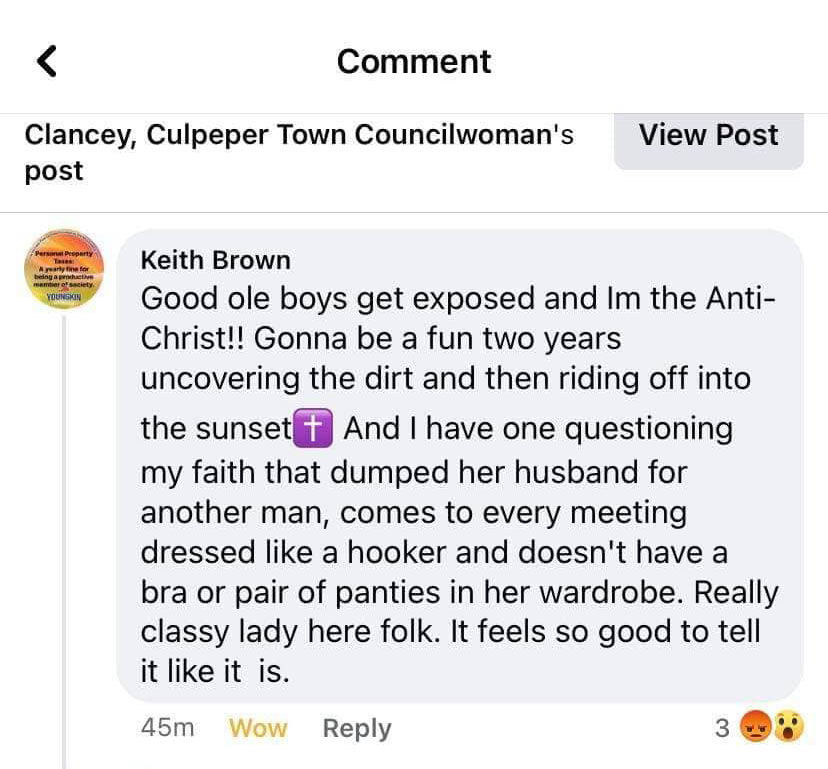 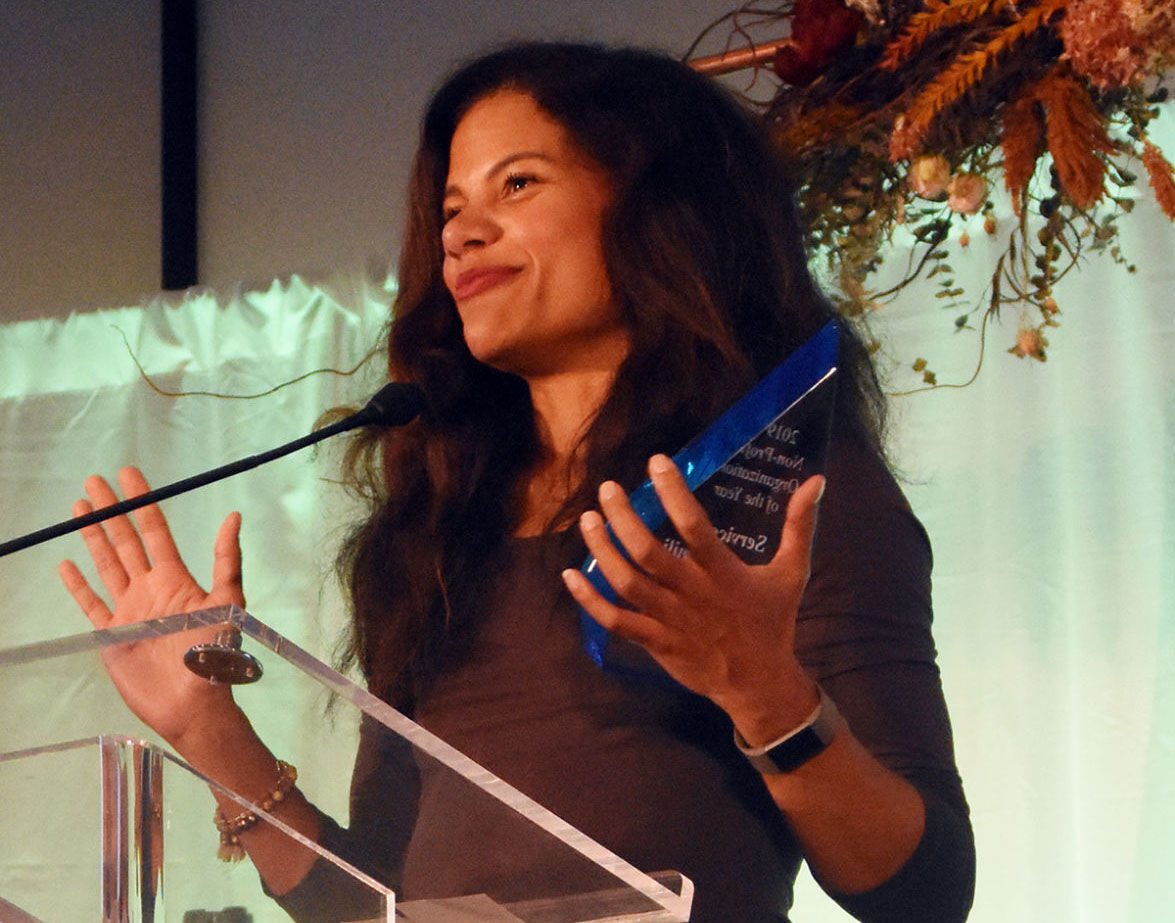 A Culpeper town councilman resigned Wednesday, effective immediately, from his post after sexually vulgar comments linked to him surfaced online about a fellow council member.

Councilman Keith Brown, a state probation officer elected in 2019, denied he made the post on the Facebook page of Councilwoman Jamie Clancey in which she was called a “hooker” and stated she didn’t wear undergarments to council meetings.

In an email to the Star-Exponent and Mayor Mike Olinger, Brown said his social media accounts were infected with a virus, rendering them inoperable due to “relentless attacks” against him due to his membership in the Culpeper County Republican Committee.

“I simply no longer want to endure the attacks. Please forward my sincerest apologies to Councilwoman Clancey, the target of the comment, and the full council for any inconveniences this situation may have caused,” Brown stated in the email.

The Star-Exponent confronted the councilman about the post earlier Wednesday outside of a committee meeting in the Economic Development Center. Brown refused comment and walked away, but did not deny making the post at that time.

Clancey, a local mom to school-age children and board president of Services to Abused Families, filed a written complaint against Brown earlier this week alleging a violation of the council code of ethics for the post that was published Monday.

The post made from Brown’s personal Facebook page responded to a post by Clancey about seeing former President Barack Obama speak during a recent political rally in Richmond. In it, she called out Brown for a pattern of social media vitriol dividing the community by political party.

“We have people on council who say they are Christian Republicans, yet take every opportunity to tear others down by lying to prop themselves up … anyone who aligns with Keith Brown really does have questionable judgement,” Clancey wrote.

The post from Brown’s Facebook page was later removed, but not before numerous screen shots were taken.

Olinger, present at Wednesday’s committee meeting, said he would call a special meeting of the Town Council to inform them of Clancey’s complaint filed with him, as specified in the code of ethics.

“I have served on council for 21 years and I have never had an issue before of anyone being disrespectful to another council member,” Olinger said. “I would feel intimidated, be nervous or scared of the guy,” he added, asked how Clancey must feel.

Now that Brown has resigned, the special meeting will not be held, Olinger said.

Olinger confirmed later Wednesday he had received Brown’s email and that he accepted his resignation. The mayor said Town Council has 45 days to fill the vacant seat.

In matters of alleged ethics code violations, two-thirds of council, six members, can decide if an investigation is warranted. The mayor would then form an ad hoc ethics committee and nominate four council members to sit on it, per the code of ethics.

If a violation was found, Town Council could impose sanctions on members whose conduct did not comply with town ethical standards, such as a reprimand, formal censure or loss of seniority or committee assignment.

Clancey, in a phone call Wednesday, said she was highly disappointed in the comment.

“It crossed a line—I definitely feel like it’s creepy behavior,” she said. “It is textbook sexual harassment and I hope he is held accountable.”

In the corporate world, the comment would be grounds for firing, said Clancey, a licensed clinical social worker. She added that disagreement in government is part of the democratic process.

“Being able to effectively manage that and communicate appropriately is expected,” Clancey said.

She added it is none of Brown’s business what she wears and the post would “absolutely not” change that. Clancey, who has worked with survivors of sexual assault and domestic violence, said there is a bigger issue at hand.

“This is about holding people accountable for the way women are treated across the board,” she said. “We all speak our mind, we will have disagreements … but the way he came at me is completely disappointing. …We have to do better. Women should not be made to feel this way.”

“It’s deplorable,” he said. “This goes way over the line.”

“It’s a clear violation of section two of the code of ethics, going after other council members, but this is worse,” he said.

Section two states, “The conduct of members must be above reproach and avoid even the appearance of impropriety. Members shall refrain from abusive conduct, personal charges or verbal attacks upon the character or motives of other members of the town council.”

“It makes her feel like dirt,” Reaves said outside the committee meeting. “I can look at you, say you ugly, you stupid—how would you feel? You don’t do stuff like that—it’s embarrassing. …People like that supposed to be setting an example for kids.”

He added Clancey is a good mom and works hard for progressive issues on council.

“There is no place for derogatory remarks amongst council members,” Russell said.

Culpeper Branch NAACP President Uzziah Harris notified the Star-Exponent on Tuesday of the post from Brown’s Facebook page. Harris called the post “predatory and misogynist” and “unbecoming of any man, let alone a town councilman.”

“Councilman Brown’s remarks reflect a total disregard for women in general and in this case, a woman of color,” Harris said. “These remarks were not only meant to demean and intimidate but to also objectify, sexualize and shame. They are dangerously akin to the sentiments of old by so-called slave masters toward the enslaved.”

SAFE issued a statement later Wednesday regarding the post about its board president.

“It is not okay to sexually harass anyone at any age and in any context. We cannot teach our daughters and sons that harassment is acceptable and a part of life because it is not. It is a part of toxicity that we do not condone. SAFE stands with anyone who has experienced any form of abuse and harassment and understands that the events of the last days have likely caused triggering.

Two-year councilman steps down following vulgar post tied to him about fellow councilwoman.