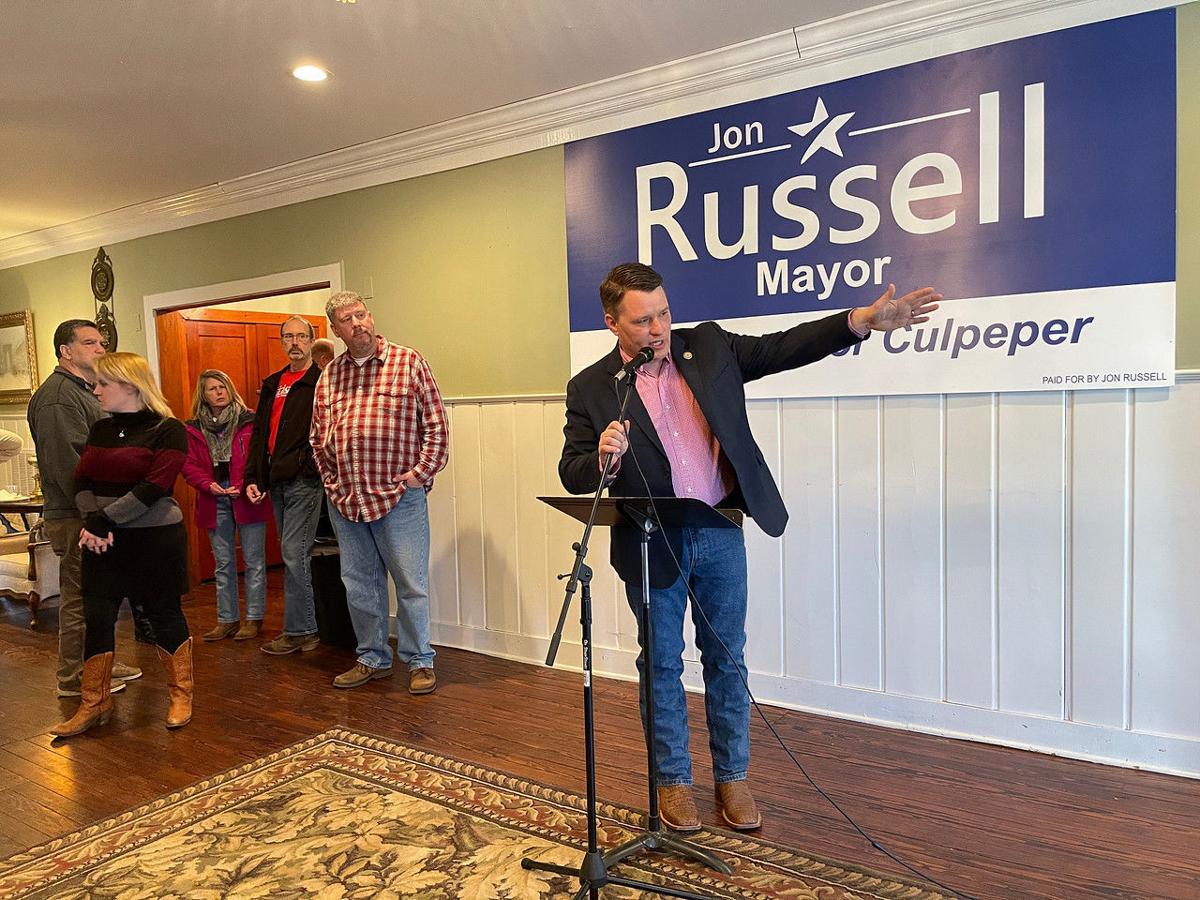 Culpeper Town Councilman Jon Russell addresses supporters Saturday at his home as he launches his candidacy for mayor in 2021’s November election. 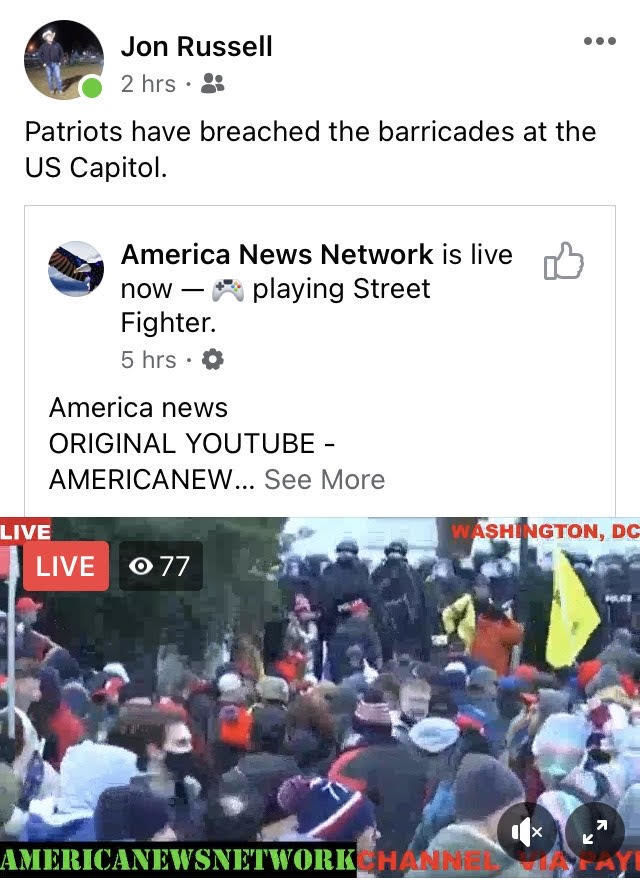 Culpeper residents shared this screenshot of a Jan. 6 social-media post by Town Council member Jon Russell. He described those who stormed the U.S. Capitol as ‘patriots.’

Culpeper Councilman Jon Russell, a Republican, remains at the center of local controversy, gaining attention from Washington, D.C. news media, after his online comment on Jan. 6, 2021, referring to U.S. Capitol rioters as “patriots.”

Culpeper Democrats, led by Ed Dunphy and Mike McClary, have called for Russell’s resignation over his comment on his personal Facebook page as the riots unfolded. “Patriots have breached the barricades at the U.S. Capitol,” Russell wrote.

Five people died in the ensuing violence, including Officer Brian Sicknick, an Air National Guard veteran who lived in Fairfax County and served 12 years with the U.S. Capitol Police. The 42-year-old New Jersey native died the day after he was beaten with a fire extinguisher and overpowered by rioters who attacked the Capitol building about an hour after President Trump spoke to Save America Rally demonstrators near the White House.

The violence, which ensued after Trump told followers, among other things, to “fight for America,” temporarily interrupted lawmakers’ certification of the Electoral College ballots affirming the election victory of President-elect Joe Biden.

Russell’s post about the day’s events showed contempt for American democracy, Dunphy said, adding he has heard a great deal of outrage about it from neighbors, many independents and Republican.

“This is not a Democratic or Republican issue,” Dunphy said via email Wednesday. “This is an issue of a person who believes himself to be a suitable candidate for public office, yet he states that the attack on one of our most sacred chambers of democracy and the duly elected representatives to be the act of patriots. This mob beat a police officer to death. This mob chanted ‘hang Pence.’ Members of Congress had to take shelter because they were in fear for their lives.”

Russell removed the “patriots” post at some point on the day of the riots, as the violence in the halls of Congress intensified. But a screenshot of it had already been widely distributed on social media.

A barrage of criticism followed, including calls that Russell be imprisoned over the post, and profane remarks on the Culpeper Persisters’ Facebook page.

Russell said Culpeper Democrats staged an orchestrated smear campaign, circulating the post and publicizing the Town Council email address for people to write in and demand his removal. It was part of their playbook to make it an issue in his bid for mayor, he said.

“That comment was posted on my private page,” said Russell, who also has campaign and Town Council Facebook pages. “Someone stole it and circulated it.”

Everyone at the Trump rally was a patriot until they broke the law, he said.

“This isn’t rocket science,” said Russell, an active social-media poster of conservative views and positions. “I removed (the post) after I saw what happened, because I was appalled. Breaking barriers is one thing, but breaking into a building is quite another.”

He said rioters had not yet breached the Capitol doors when he made the post. On Saturday night, Russell signed a Culpeper Town Council statement condemning the violence.

This week, he told Washington’s WUSA-TV in an interview that the term “patriots” was “a term of endearment” for Trump supporters.

McClary, an outspoken Vietnam War veteran, said in the WUSA segment that “There was nothing patriotic about any of those people.” No amount of backtracking on Russell’s part could “erase the stain he painted himself with when he praised traitors and rioters,” he said.

In a phone interview Wednesday, McClary admitted to using profanity in a social-media post targeting Russell. But he said the councilman has been a divisive figure for years in the Culpeper community.

“It’s my firm belief he should resign for the good of the community, but he won’t do that,” McClary said.

He added that he thinks Russell’s Jan. 6 post will be an issue in the mayoral race, saying local Democrats did not orchestrate any smear campaign. The online pushback happened spontaneously, McClary said.

“We will make it an issue because this freak doesn’t have any business being the mayor of our town,” he said. “I feel passionate about these things and have no tolerance for dishonorable people.”

Dunphy said he is a member of the Culpeper County Democratic Committee, but is an American first.

“My outrage comes from my deep love of my country,” Dunphy said. “Russell refuses to be repentant. Russell also continues to make statements on newscasts that he believes that the November election was fraudulent.”

He referred to a recent BBC News broadcast in which the councilman questioned the election’s validity.

“These lies, when espoused by officials, contribute to the continuing threat of violence in this country,” Dunphy said. “Will his comments dog him up until the November election for mayor? I certainly hope so. I hope everyone who goes to the polls will be aware of his contempt for our democracy.”

Russell said he felt local Democrats might show up in force at Tuesday’s Town Council meeting to call for his ousting, in person. But none did. Instead, people spoke to support him, loosely referencing the recent discussion on Facebook about his post.

“They can’t remove me,” Russell said. “It’s all political. Why remove me because I support Trump? Try explaining that to the voters who overwhelmingly voted for Trump in town.”

Alexander Valle, a Republican candidate for Town Council, said it was un-American to call for Russell’s resignation “only because he is a patriot and supports Donald Trump.”

Culpeper went through the Civil War, Valle said, and the wounds are still fresh, he said: “Just ask the sons and daughters of the Confederacy.” Valle alluded to a liberal agenda that he claimed attempts to take away people’s gun rights, saying it “will ignite the flames of another civil war.”

Nichols said it was a political stunt and hypocrisy to question Russell’s morals.

“We are not here to create a far-left liberal agenda,” she said. “This is a farce. If any council members were behind or complicit in this attack [on Russell], or personal freedoms, you should be ashamed and you should resign.”

April Quinn, a member of the Culpeper Second Amendment group, said she was in Washington on Jan. 6, but left before Trump spoke, after being out in the cold for hours.

“If I want to go and support my president, that is my right,” she told the council.

Quinn said anyone who did anything illegal during the riots should be arrested.

“People want Jon Russell to resign because he supports the president and he called them patriots,” she said, adding that there is too much hate and division in America.

Fred Sapp spoke in support of Russell. He said the councilman used the term “patriots” before protesters breached the doors of the U.S. Capitol.

“Once they went through those doors, they were not patriots anymore,” Sapp said.

He spoke about the patriots who wrote the U.S. Constitution and how colonists harassed the British, and several were killed at the Boston Massacre.

“Those patriots said enough is enough. This will not happen in the government we are creating,” Sapp said.

Dunphy did not attend Tuesday’s meeting due to the rise in community spread of COVID-19. He expressed concern about people at the meeting who did not wear face masks, including Russell. For many months now, Russell has been the only council member without one, in protest of public-health rules.

Russell said in a message Thursday that said he supports choice when it comes to wearing a mask. He said he wears a mask in businesses requiring one and that he's fine with businesses enforcing mask wearing, but not with the government mandate.

“Not only did this distillery allegedly dump tens of thousands of gallons of industrial waste into a stream, [its owner] also allegedly lied about it to investigators, and that will not be tolerated in Virginia,” the attorney general said.

Biden's HHS secretary pick: If we do this, we will get the pandemic under control

Biden's HHS secretary pick: If we do this, we will get the pandemic under control

Culpeper Town Councilman Jon Russell addresses supporters Saturday at his home as he launches his candidacy for mayor in 2021’s November election.

Culpeper residents shared this screenshot of a Jan. 6 social-media post by Town Council member Jon Russell. He described those who stormed the U.S. Capitol as ‘patriots.’