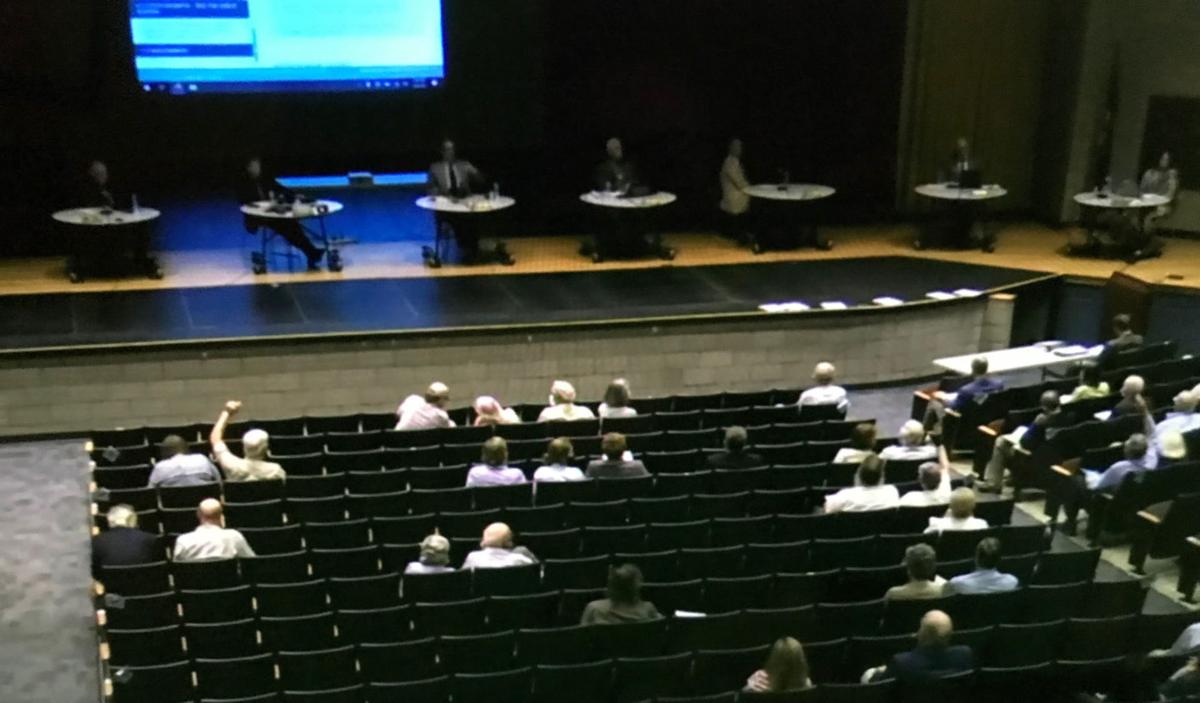 Dozens attended Tuesday’s meeting of the Culpeper County BOS to weigh in on the utility scale project of Maroon Solar. 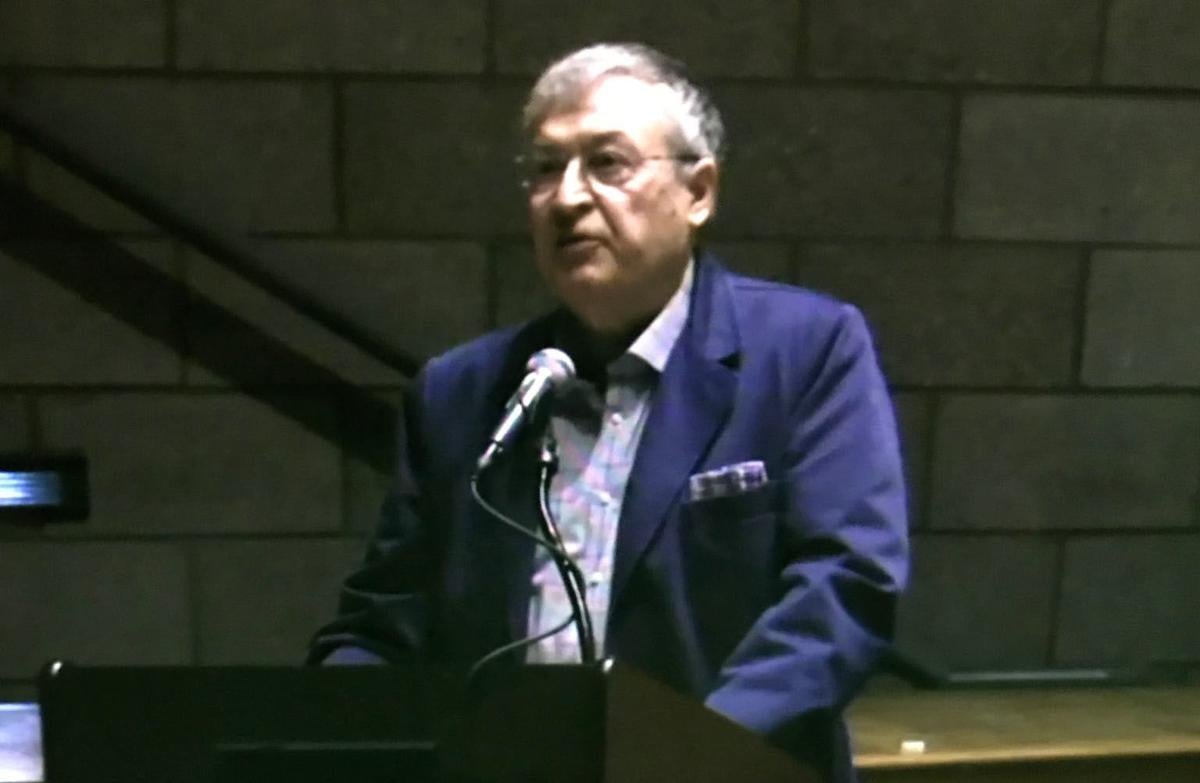 Ron Maxwell, director of "Gods and Generals" and "Gettysburg," speaks Tuesday night against the Maroon Solar project at the Culpeper County Board of Supervisors meeting. 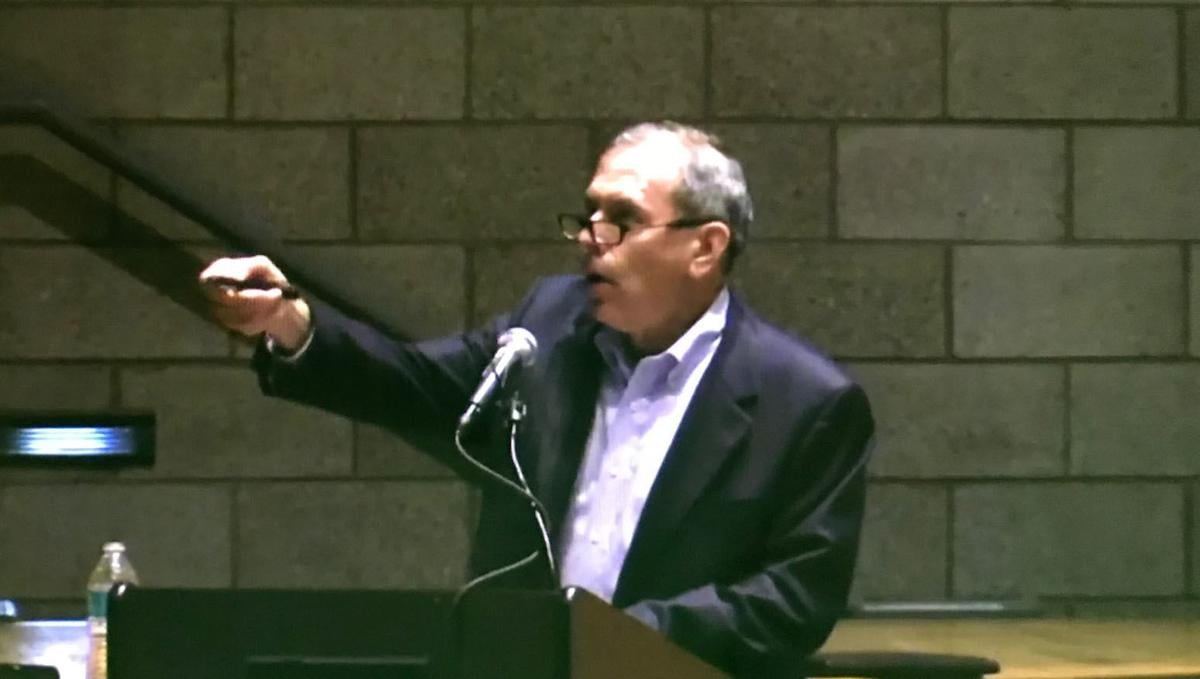 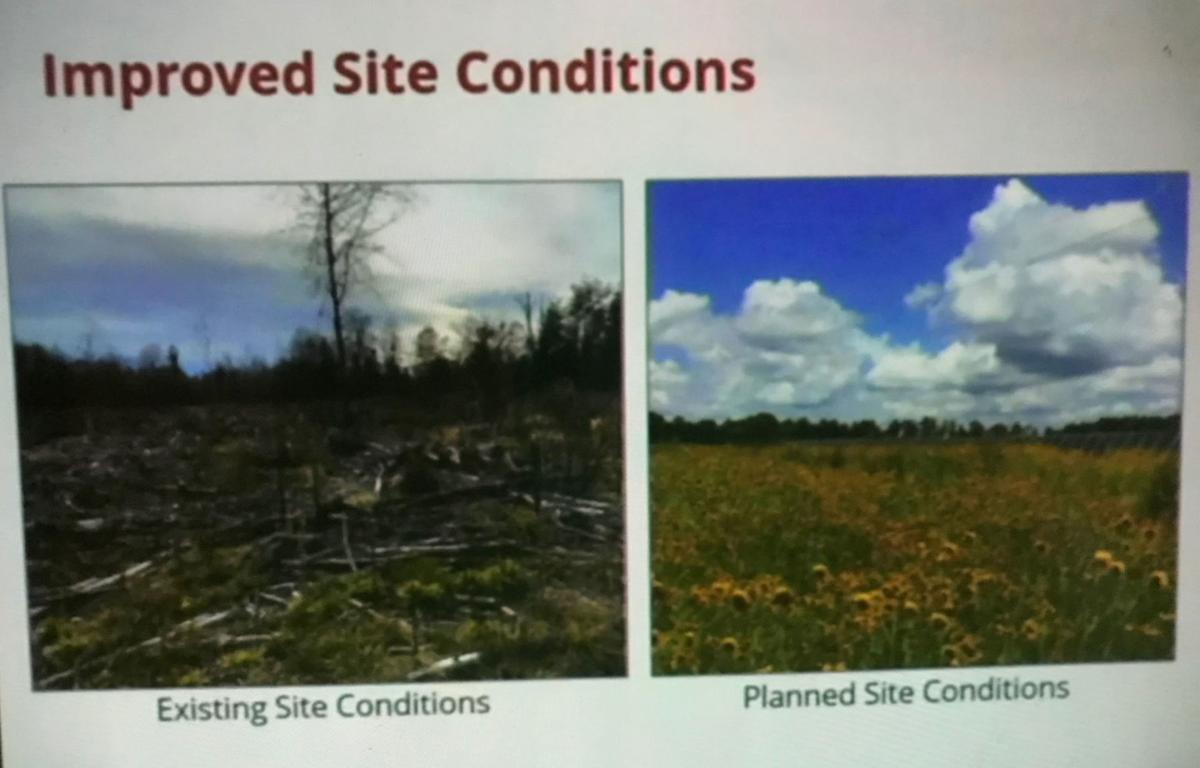 Utility scale solar is still a no-go for Culpeper County.

Of those, seven spoke in favor of the 149-megawatt, $200 million-project on agriculturally zoned land, while the rest were passionately and adamantly opposed, speaking for several hours at the night meeting of Culpeper County Board of Supervisors, held in the auditorium at Eastern View High School.

In the end, the board, clearly influenced by constituent resistance, unanimously voted to deny the request from project developer Strata Solar, of North Carolina, for a conditional use permit to move forward with the facility.

The vote came just before midnight after around 30 minutes of discussion among the seven-member board. Stevensburg Supervisor Bill Chase, participating by teleconference, was prepared to vote right away.

“I’m ready to move on the motion at hand tonight,” he said.

Chase, formerly generally in favor of solar power for Culpeper County, said hearing all the comments from his neighbors changed his mind and he was ready to “put it to bed.”

Supervisors Paul Bates and Tom Underwood were of the impression the solar plant proposal was, in fact, in compliance with the comprehensive plan, contrary to the findings of the planning commission. The planning commission also determined that the project was out of character with the area, too large, and would be injurious to the health and safety of area residents.

The county comprehensive plan chapter about renewable energy states solar energy is expected to play an important role in Culpeper’s future and that the board would support it “where appropriate,” Bates said.

The “where appropriate” part was a major sticking point for the opposition, who claimed the utility-scale project would ruin the rural nature of the area, the environment and historic resources. Concerns were also raised about construction traffic during the three-year project, as well as noise from blasting on site.

Rappahannock County resident Ron Maxwell, director of the Civil War films “Gods & Generals” and “Gettysburg,” kicked off the public hearing to which he was invited to participate by Citizens for Responsible Solar, the neighborhood grassroots group that has led the opposition. Maxwell said residents can put their own solar panels on their homes for renewable benefit, adding that a middle man and solar farms are not needed.

“It’s a redundant, unnecessary technology to start with—a technology that is already antiquated,” he said.

Why would Culpeper want to diminish its rural advantage, Maxwell asked: “We are self-sufficient because our neighbors are farmers … if things go south, we survive.”

He leaned into “the assault on our culture and our heritage,” saying of the area’s history, including the Civil War, “These are our people, this is our country, this is our home … this is sacred land. It must not be violated.”

William Foshay is one of three siblings who own the antebellum mansion at Greenville on Algonquin Trail, in proximity the solar project. He spoke Tuesday night against the initiative, having grown up at the circa-1854 residence.

“I always thought Culpeper was a beautiful and special place, balancing industrial, residential, agricultural and historic uses,” Foshay said. “A 1,700-acre solar plant in an agricultural use district is not balanced. It is not Culpeper common sense.”

The Culpeper County Planning Commission twice recommended denial of the solar proposal. Since the last denial two months ago, Strata Solar doubled the siting agreement to the county from $1 to $2 million.

Strata development consultant Dave Stoner, in remarks Tuesday before the board, said the project is responsible, for it phased construction and limited visibility from the road and neighboring properties. The remote site would have extensive setbacks and buffers with no homes within 1,000-feet, Stoner said.

The project would generate some $14 million for the county through revenue-sharing and create 400 construction jobs, he said.

Stoner described restrictions on construction traffic and potential developer improvements to roads in the area to handle it. Blasting on site would be limited, he said, for creating sedimentation basins in areas of shallow bedrock. Stoner said the site is more than a mile from core Civil War battlefield in the area and would not impact rural views or property values in the area.

In early statements, Strata lawyer Michael Coughlin said the project was in compliance with the comprehensive plan as it helps the county with its renewable energy goals and economic development. While in use as a solar plant, 44 percent of the land would remain open space, he said, adding solar fields are not an industrial use.

Couhglin said the project would have no impact on the area’s historic resources, which triggered a response from noted local preservationist and historian Clark “Bud” Hall.

“He doesn’t know anything about Culpeper County,” Hall said.

Raccoon Ford at the Rapidan River was a Native American crossing prior to colonial times, he said. It is tied to the American Revolution and the Marquis de Lafayette—in addition to intense action and troop movement on both sides during the War Between the States, Hall said. He urged the board, on behalf “of our legacy,” local residents and all the visitors to deny the application.

Area farmer Dwayne Forrest, on whose land solar panels would sit, was one of a few who spoke in favor of the project, saying he has a right to use his property in this way. He said Strata projects are well-managed and produce clean, green energy.

“As a farmer, I believe it will be the best use of some of Culpeper’s poorest land,” he said.

A representative from Pennsylvania-based Pardee Timber, majority owner of the recently clear-cut wooded parcel, said the company has owned property in Culpeper since 1905 and currently has around 7,000 acres. Pardee has been inundated with requests for solar projects on their land.

“This is the one project that’s been vetted, they’ve been working two years to put this together,” the company representative said. “We ask you to approve the conditional use permit and let this project proceed.”

Stevensburg resident Don Haight equated the board’s decision to “judgment day,” saying the character of elected officials would be judged by residents and God based on their decision.

“We will see who cares about our county,” he said.

“Don’t make a money grab for the county on the backs of Stevensburg residents,” he said.

Stevensburg resident Marilyn Ralston, a real estate agent formerly from California, in decrying the project, encouraged the board to keep Culpeper’s history intact: “We must preserve the character of our county.”

Siblings Willie and Melissa Crenshaw’s parents own property that was offered a land lease from Strata Solar for the project. He said the project would not harm the area’s wildlife or hurt the environment.

“My mother and father are getting up in age … this is the best use of the land right now, they can get some benefit out of it … this is the best project we have seen … we support it as landowners and taxpayers and ask you to approve the project,” Willie Crenshaw said. “It will be a benefit.”

Melissa Crenshaw added it was very disturbing to hear people tell her parents what they can and cannot do with their land.

“This is the landowner’s property and they want to put solar panels on it,” she said. “It’s not going to harm anybody.”

Alex Foshay said the solar plant would have “a horrifically detrimental effect” on the local environment, its history and neighbors. He, like others, pointed out that landowners are not free to do whatever they want, that there are rules and zoning classifications to follow.

“I don’t envy you the decision,” Foshay said, addressing the board, adding it would likely set a precedent for more large scale solar projects looking to locate along the Dominion power line in Culpeper. “They’re all coming—get through this one, move onto the next.”

Neighbor Mike Baudhuin, owner of Sumerduck Farm, another 19th century estate in the area, added his voice to the opposition Tuesday.

“People think they have a right to use their land—nobody has a right to build a power-generating facility on their land,” he said. “This thing has been twice rejected by your planning commission … as a citizen and taxpayer I am appalled and insulted by the hubris, the gall of these people to disregard entirely the will, the direction, the law, the policy and the requirements.”

It didn’t take the board long to turn down the request for the conditional use permit with East Fairfax Supervisor Kathy Campbell seconding Chase’s motion to deny. The rest of the board followed suit—even Underwood and Bates, who felt the project was in compliance with the comprehensive plan.

“I will not support the conditional use permit when the Stevensburg supervisor won’t support it,” Underwood said. “I will go along with Mr. Chase—it is what it is.”

Several large-scale solar projects have been submitted for construction in Culpeper County, but only one, Greenwood, has gained approval—more than two years ago. That permit has since expired and the status of the project remains unknown.

Body found in wrecked car on U.S. 1 in Stafford

A 22-year-old man was found dead in a wrecked vehicle in the 3400 block of Jefferson Davis Highway in Stafford County late Thursday, police said.

City slaying may have happened after argument between couple

Dozens attended Tuesday’s meeting of the Culpeper County BOS to weigh in on the utility scale project of Maroon Solar.

Ron Maxwell, director of "Gods and Generals" and "Gettysburg," speaks Tuesday night against the Maroon Solar project at the Culpeper County Board of Supervisors meeting.