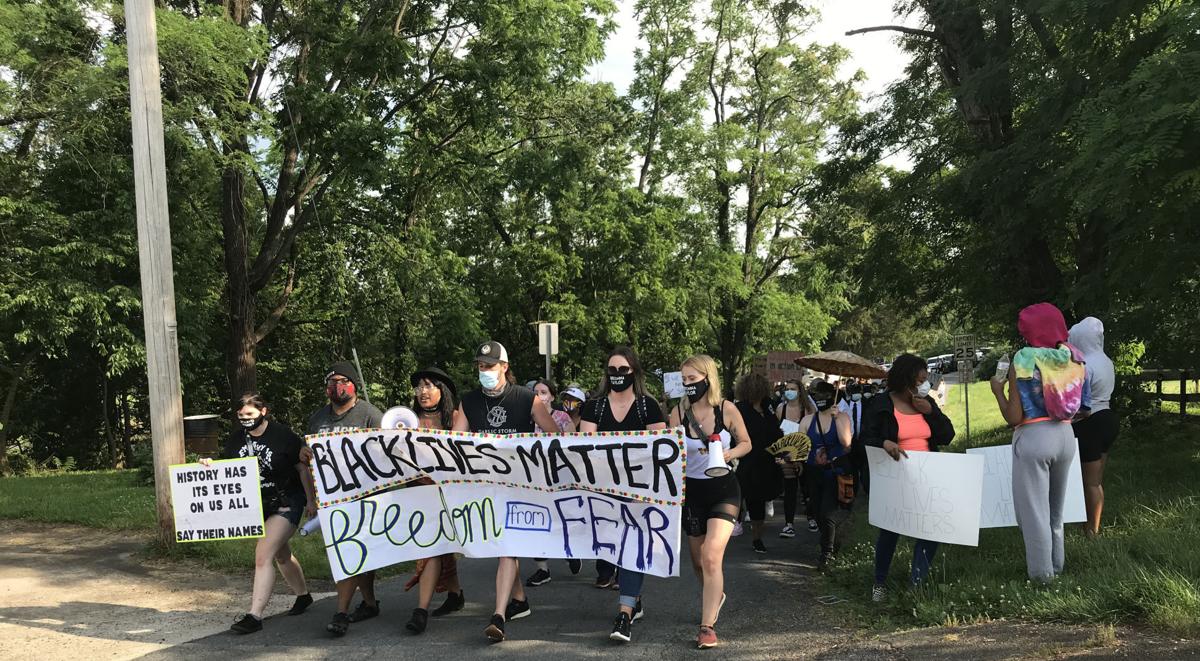 Local organizers of a Black Lives Matter event in June in Culpeper hold a banner while leaving Yowell Meadow Park to start the march. 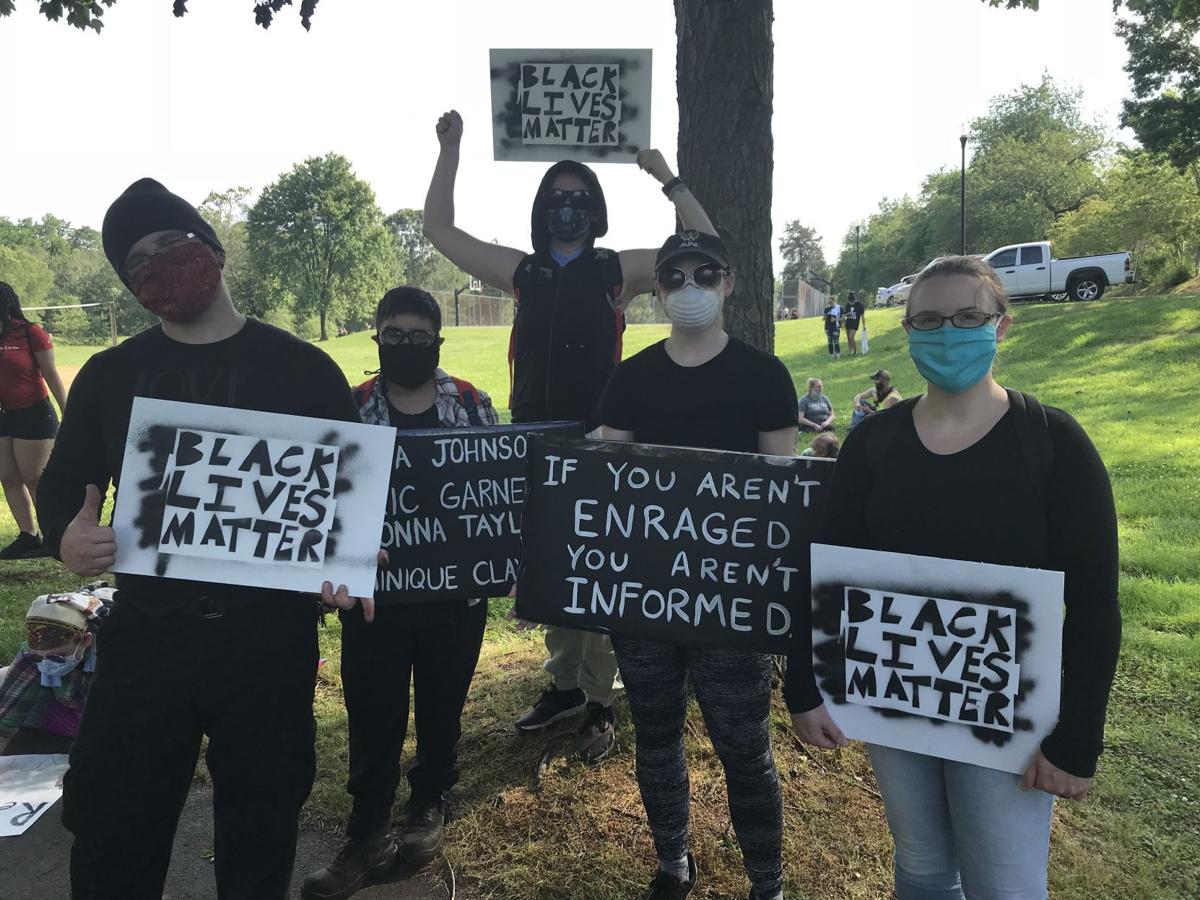 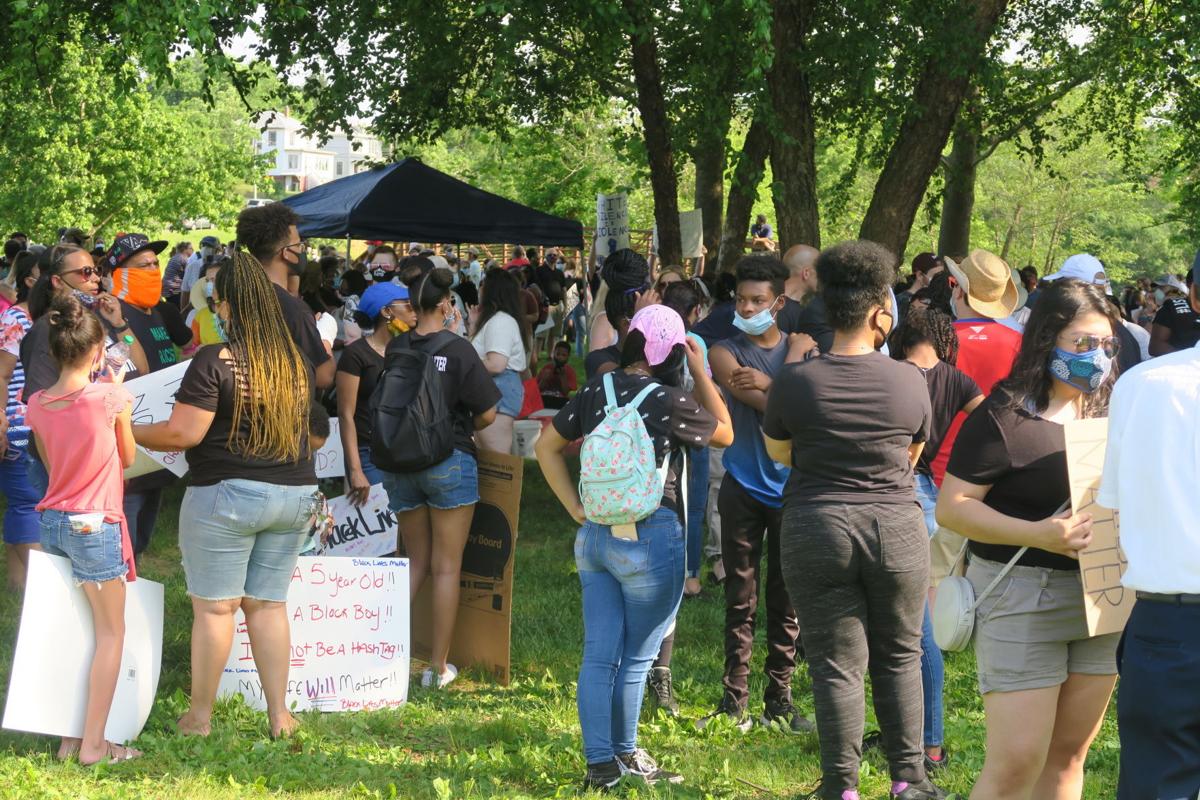 And the county’s top elected Republican lawman warned that while Culpeper has stayed peaceful in these unprecedented times that things were going to get a whole lot worse as November approaches.

Jenkins’ video was in direct response to a series of posts he put up last week on the official agency social media page about BLM, including reposting an apparent fabricated report of violence by protesters in Roanoke. He took responsibility for the posts and said BLM could bring its “violence to any community at any time and especially where they see weakness in local government officials.”

The post with the article of purported BLM violence in Roanoke remained on the CCSO page as of Tuesday with the sheriff standing by its author, a Georgia-based freelancer. The Roanoke Times, which has repeatedly debunked the story, wrote a scathing editorial Monday aimed at Jenkins, “Has the sheriff of Culpeper County just given criminals an ‘out’?”

Jenkins started his recent video with more direct comments about “the violent actions of Antifa and Black Lives Matter across the nation.” The sheriff made first mention of the groups’ purported “Marxist revolutionary goals and ideology,” a phrase he repeated nearly half-dozen times in the video.

“Those things are indisputable and require little effort for anyone to verify. I’d like to give a heartfelt thanks to the many local leaders in our Black community who contacted me the last few days and given such strong support of our office. That doesn’t happen without the strong relationship foundation of trust that we’ve developed over the last nine years of my administration as well as a lifetime in this community,” the sheriff said.

Jenkins attended the Culpeper Blacks Lives Matter march in June, noting the event was peaceful and positive as have been other local “social justice efforts.”

“Many are offended that the message was directed at them because of their skin color or their support of the broad concept of BLM. That incorrect thinking has been encouraged by outside agitators and even local citizens with political agendas. Let’s all take a deep breath and remember our neighbors relationships haven’t really changed,” the sheriff said. “Personally I choose not to believe that a few months of isolation and too much social media and news stations have made my neighbor suddenly become a racist.”

Jenkins said some might wonder why a sheriff would make a polarizing Facebook post or alarm the community to things not happening here? The sheriff said it is his job to alert citizens to potential safety issues even if some might find the prospect “uncomfortable.”

“We’re in unprecedented times what is happening in our state and country as is clear to everyone through open source media and as law enforcement I’m privileged to some additional intelligence information,” Jenkins said, pointing out Culpeper’s location in the middle of Richmond, Charlottesville and D.C.

He said citizen concerns to his office about the racial justice movement have increased exponentially in recent weeks.

“Unfortunately, it’s my sincere belief our nation will see things get far worse in November than we’ve seen all summer and it may impact communities that really not seen any difficulties or civil disturbance,” Jenkins said. “We know that ever y town in America is just one police controversy away from their own rioting and civil disturbance. That doesn’t have to happen here.”

The sheriff acknowledged the many locally acting in a peaceful pursuit of social justice. He said some community members may not “fully understand the negative connotation when they use the banner or slogan of BLACK LIVES MATTER in all caps. They may not aware of the stated goals and Marxist revolutionary agenda of the BLM organization.”

Jenkins said he knows local citizens supporting the BLM movement are not in favor of killing police or overthrowing of the government: “We don’t hear or see a separation of the local efforts from that of … Black Lives Matter and its founders,” he added. Jenkins said the local BLM movement has not done enough to highlight the difference in their platform.

Jenkins said many Culpeper commuters in travelling to nearby cities “have had bad experiences with these groups confronting, intimidating them and their families. We’ve even had a Culpeper deputy in a marked vehicle confronted while traveling through a nearby city.” The sheriff called out white supremacist and far right groups as well as “the individual choosing to fly a large rebel flag and drive by our black-owned businesses and events.”

Jenkins concluded, “We’re aware and we’re confronting those people head on. To those people, my message is simple. We’re all Americans and we’re one community. Have your history and beliefs as you so choose but do not try to intimidate and harass others, target people due to race, religion or other differences. If you do, then plan to meet us. Our country is much divided right now. Culpeper remains strong. Putting our heads in the sand locally will not help as the nation gets more polarized.”

Culpeper BLM responds: ‘one of the most ignorant posts we’ve seen’

Local BLM organizers called the sheriff’s comment about Black Lives Matter and Antifa “one of the most ignorant posts we’ve seen from a county official period” and “An absolute unacceptable attempt of public manipulation,” according to a post at the Black Lives Matter – Culpeper Sec page.

The local group noted Jenkins attended BLM protests in Culpeper and there were no arrests or violence. The post said the sheriff was posting false information to sway the views of Republicans and conservatives in the area. In a follow-up message from the local group, a local BLM representative said they cannot be held responsible for educating the sheriff: “We feel disheartened to hear he hasn’t been paying attention.”

One of the organizers of the BLM March in Culpeper, local entrepreneur Brandon Miles, asked Tuesday how the sheriff could question their motives when he was at the rally and heard all the speakers and their message. Miles, a board member for Culpeper Youth, said he felt the sheriff’s statements put a target on their backs, and has made even peaceful protests unsafe at this point.

“Everybody gonna be on edge,” he said. “We have been fighting for our peace and for the youth for years in that town!”

Miles said he was disheartened by the spreading of false information from someone sworn to protect the people.

“We mentioned nothing about overthrowing police or the government. We, however, did say ‘defund,’ meaning the money meant for mental health should go those professionals to do their jobs,” he said. “Our local movement is about progression and equality.”

Miles distanced himself from the national BLM organization, saying the local group is not sanctioned nor does it need to be: “Black Lives Matter and we are black so that’s enough for us.”

The station quoted northern Virginia attorney Kim Daugherty, an organizer for a potential effort to recall the sheriff through an action in the local courthouse.

She told the Star-Exponent on Tuesday, per state code, removing the sheriff would require signatures from 1,500 registered voters – 10 percent of the vote in the election – and that it would not be an easy process to pursue. Nothing had been filed in the case.

Daugherty, who lives in Fauquier, said she had been in communication with several local activists and groups about filing the possible recall petition. One of the legal standards for removal is misuse of office, the lawyer said, “basically putting the office in a situation where it looks really bad on the office and the ability to perform, essentially.”

“What people are so upset about is the sheriff has had significant contacts with the Black Lives Matter movement in Culpeper and it has been nothing but peaceful,” she said. “Now, he is sharing information that has not been substantiated, giving legitimacy to the message by making it an official statement from his office on the sheriff’s Facebook page.”

Those who signed the recall petition would swear under oath that the facts as alleged occurred and that they believe it meets the legal standard for recall, Daugherty said.

As for whether BLM is a Marxist organization, the answer is complicated, as reported by PolitiFact from The Poytner Institute. (https://www.politifact.com/article/2020/jul/21/black-lives-matter-marxist-movement/)

The reporting cited a July New York Times story in stating Black Lives Matter might be the largest movement in history with some 15 to 26 million people Americans having participated in demonstrations over the Memorial Day shooting death while in police custody of George Floyd and others.

Miriyam Aouragh, a lecturer at the London-based Westminster School of Media and Communication, told PolitiFact: "I am fairly convinced these are mostly attempts to smear anti-racist activists. I think in some media, ‘Marxist’ is dog-whistle for something horrible, like ‘Nazi’, and thus enables to delegitimize/dehumanize them,"

Black Lives Matter "is not an organization, but a fluid movement; it doesn’t actually matter if one of its founders was a liberal, Marxist, socialist or capitalist," she said.

Local organizers of a Black Lives Matter event in June in Culpeper hold a banner while leaving Yowell Meadow Park to start the march.