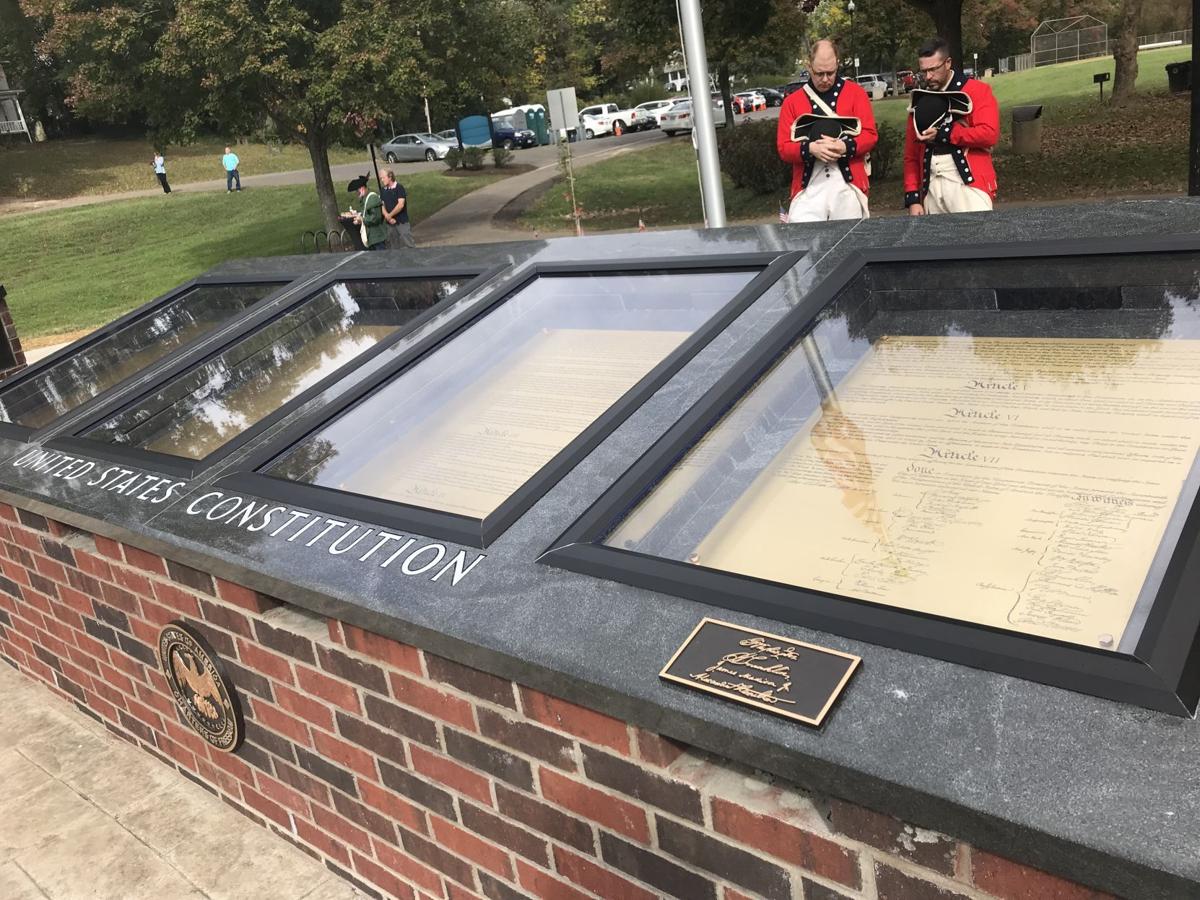 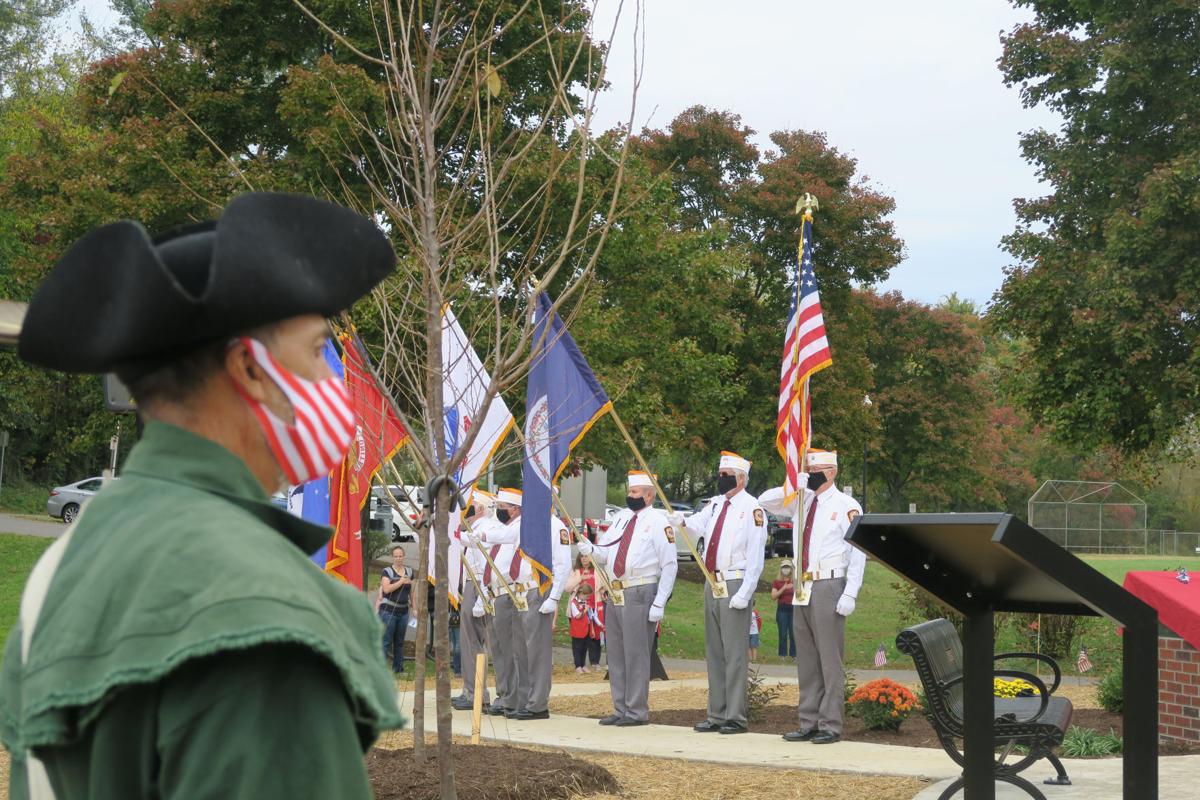 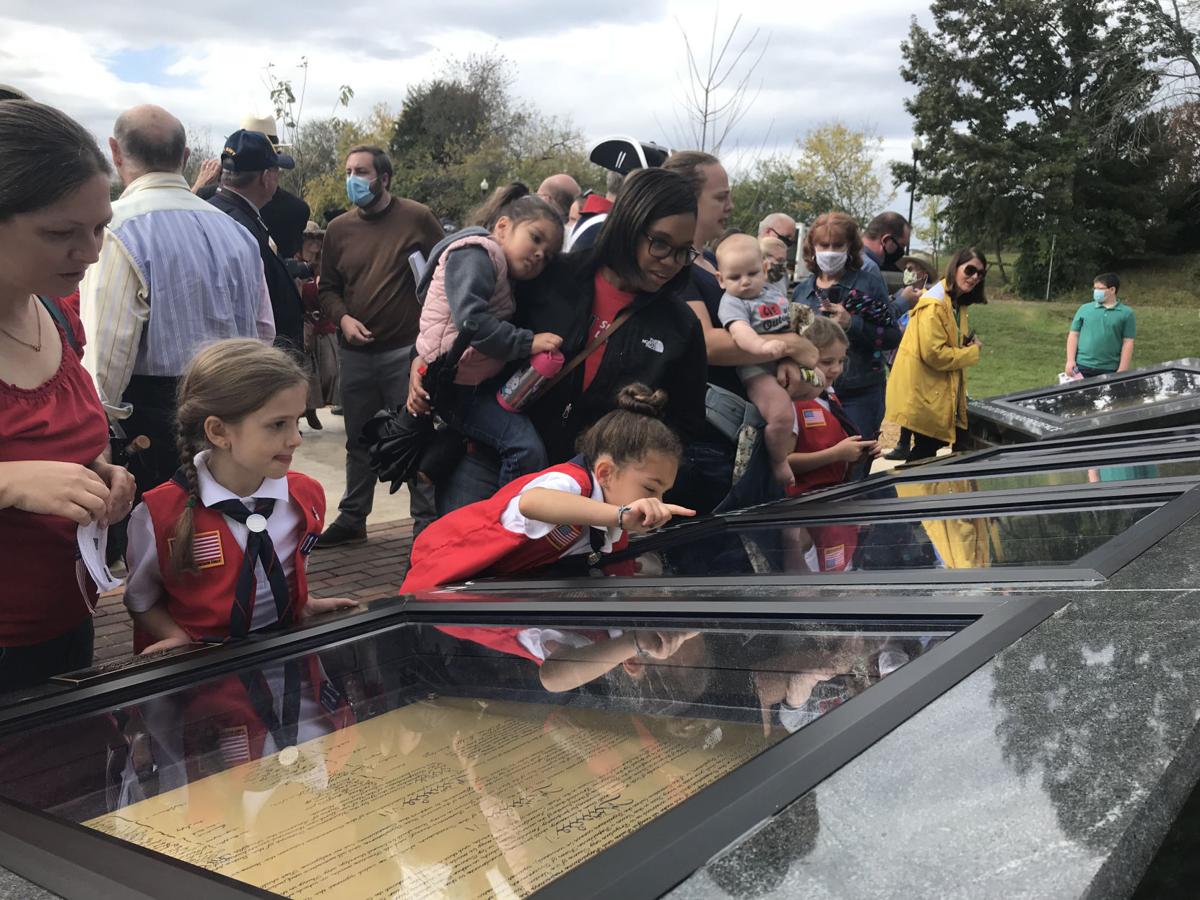 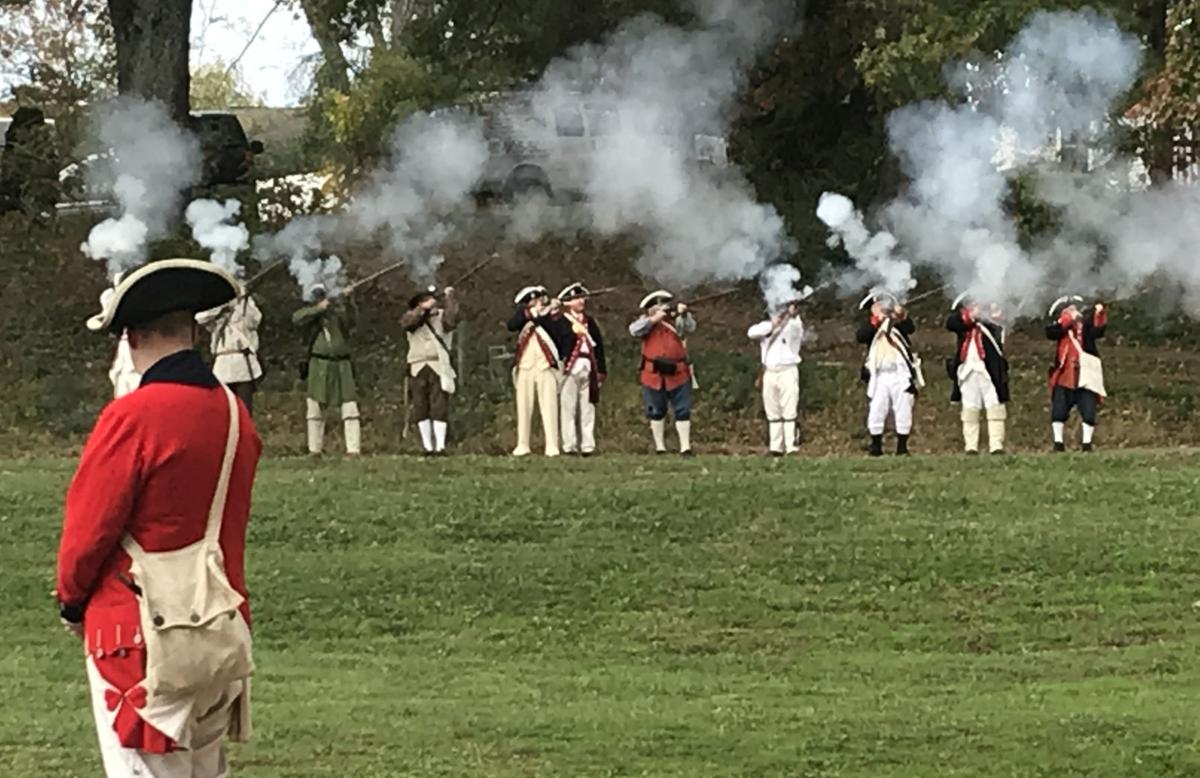 Members of the Culpeper Minutemen Sons of the American Revolution fire muskets Saturday in Yowell Meadow Park as part of the day’s monument and installation dedication. 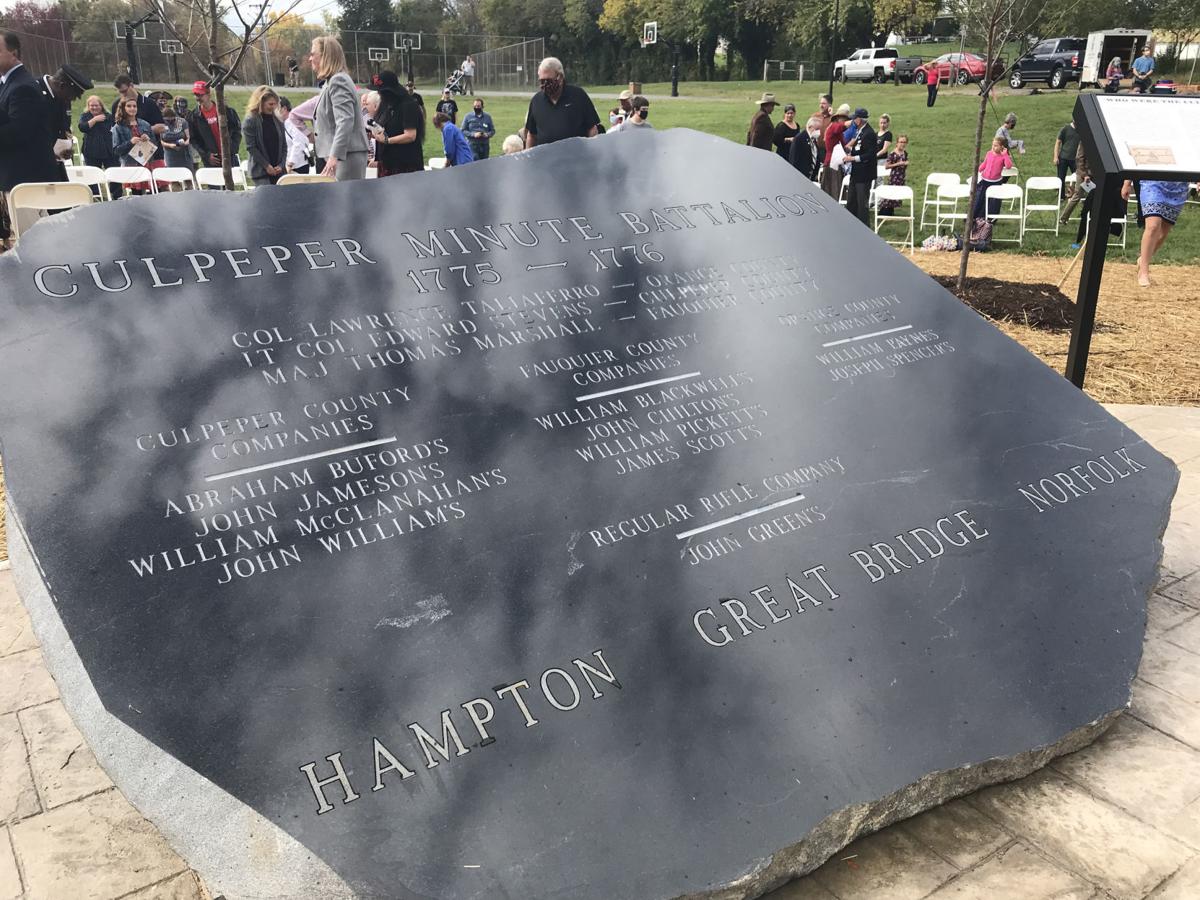 A new monument to the Culpeper Minutemen Battalion was dedicated Saturday in Yowell Meadow Park. The stone came from Virginia Mist Quarry in Culpeper County. 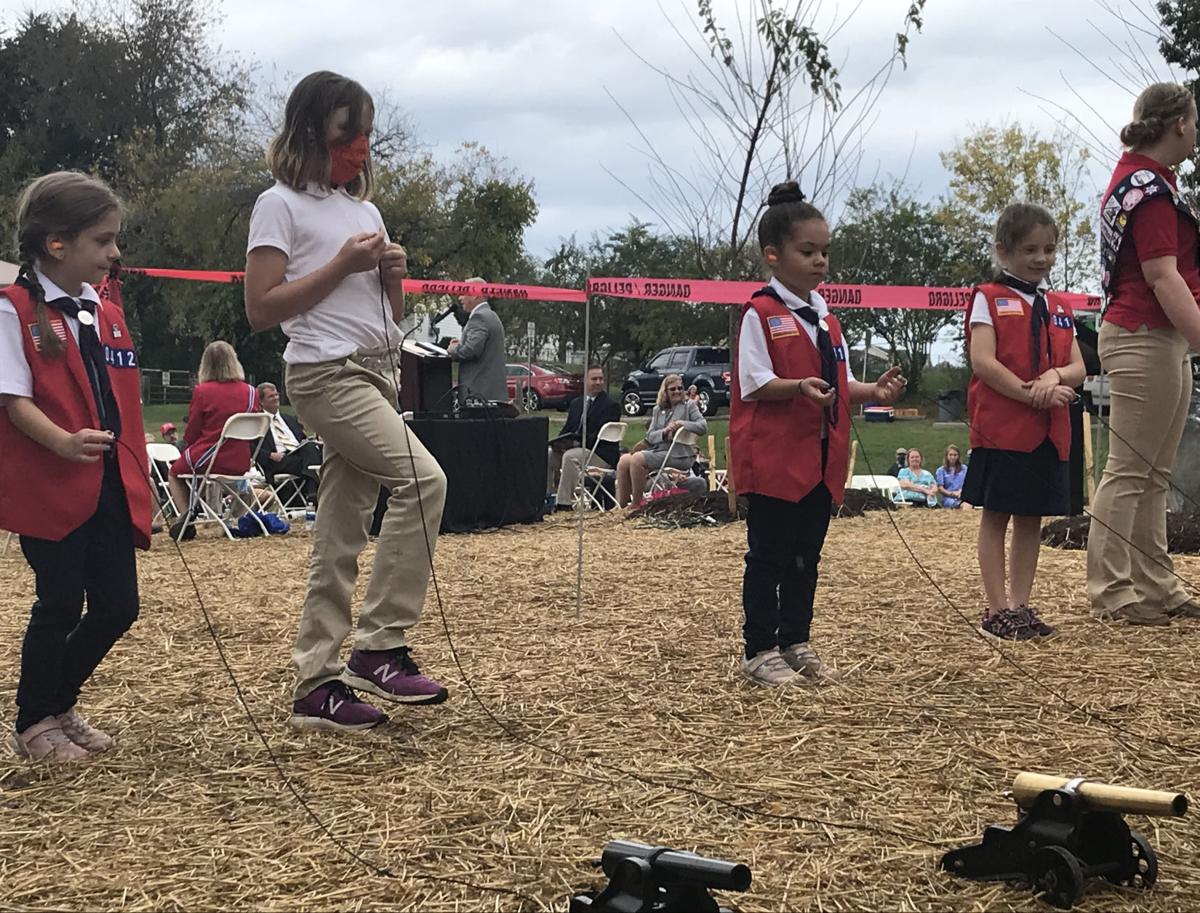 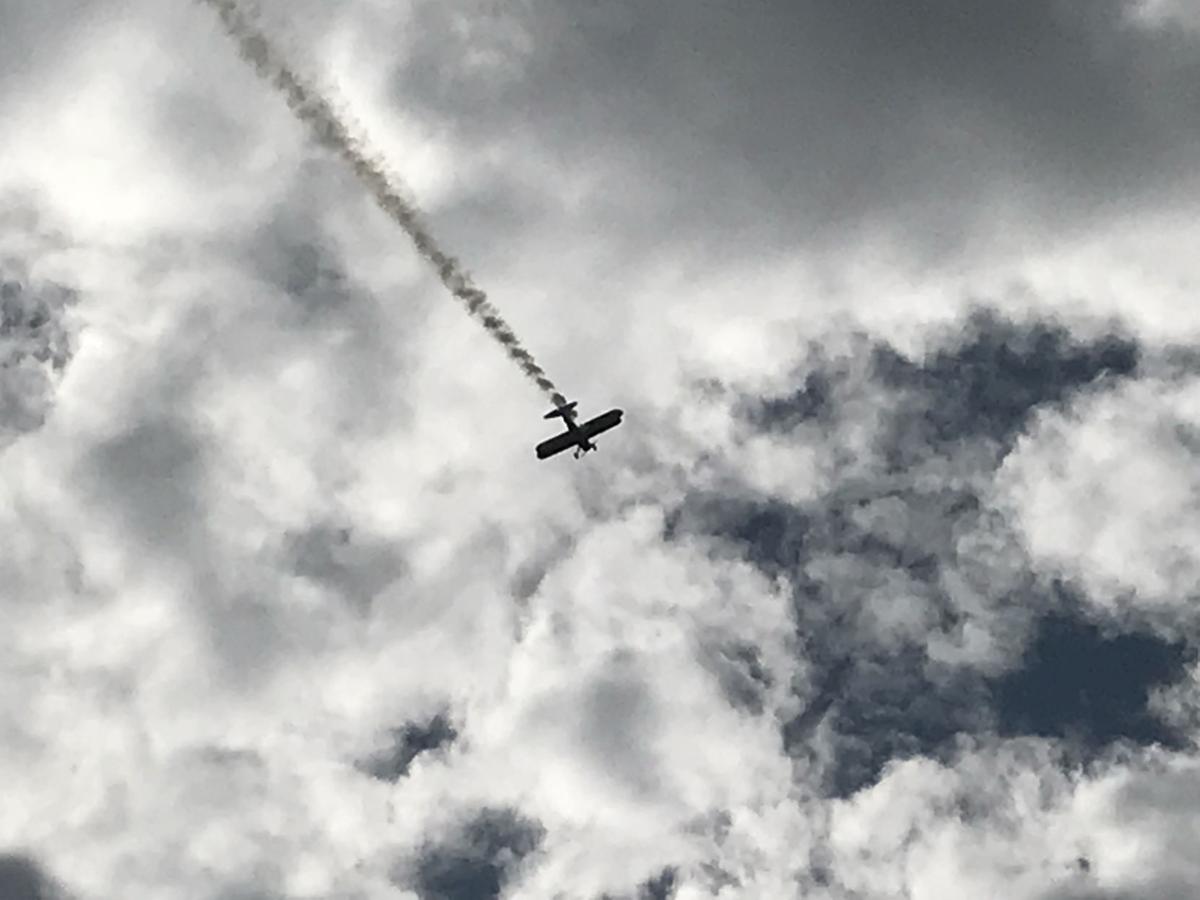 The Capitol Wing of the Commemorative Air Force based at Culpeper Regional Airport flew various vintage aircraft, tipping their wings, over the Charters of Freedom dedication in Yowell Meadow Park. 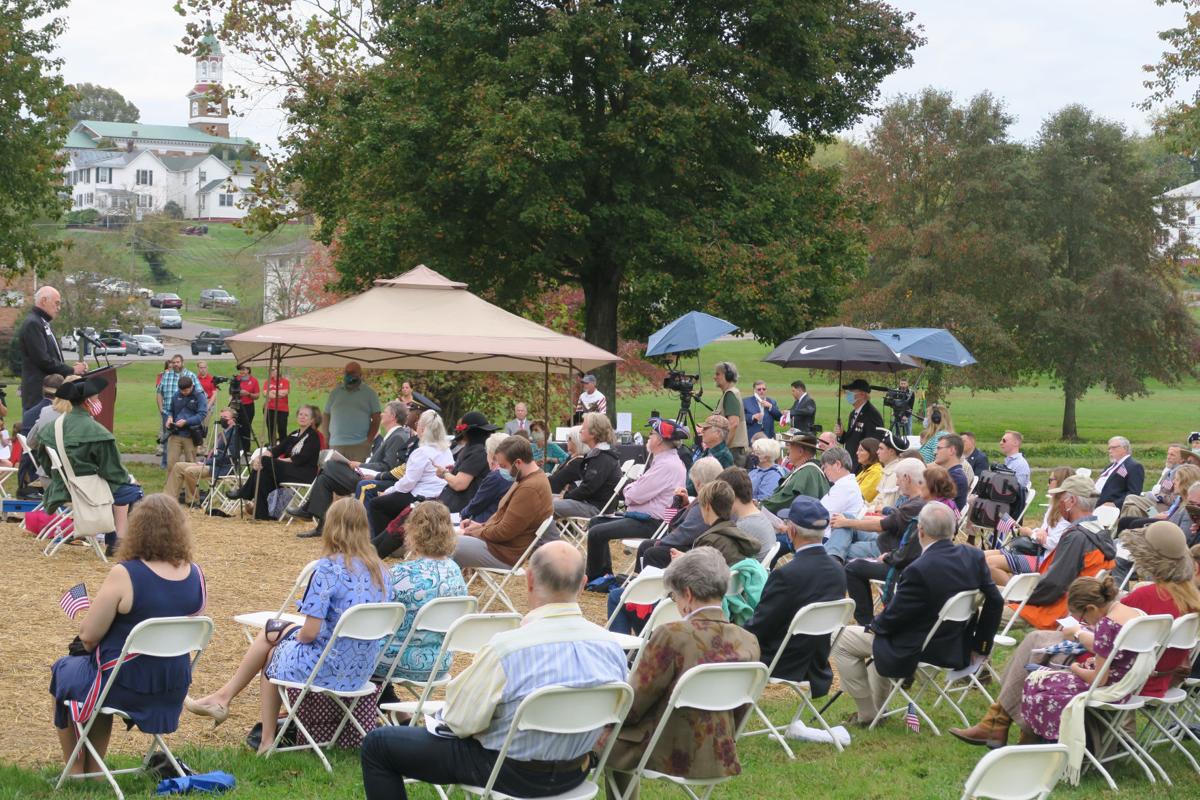 A crowd of around 200 attended Saturday’s monument dedication in Yowell Meadow Park. 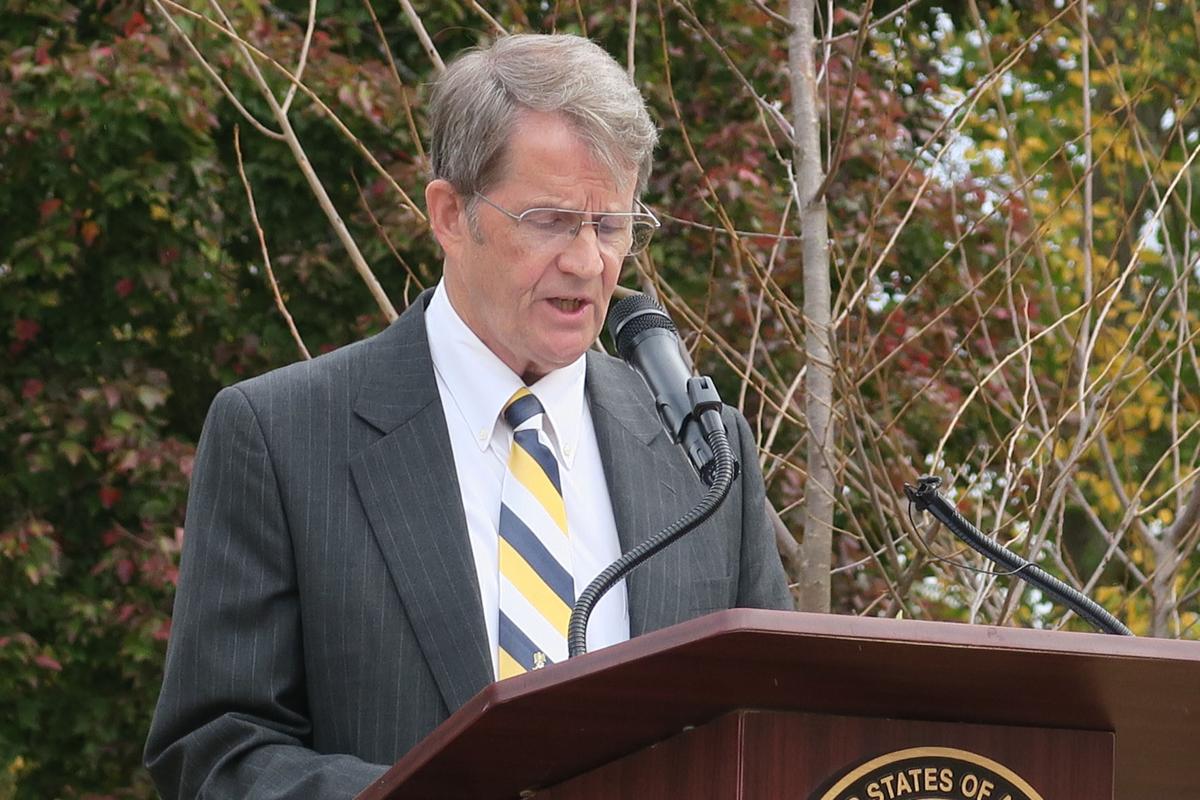 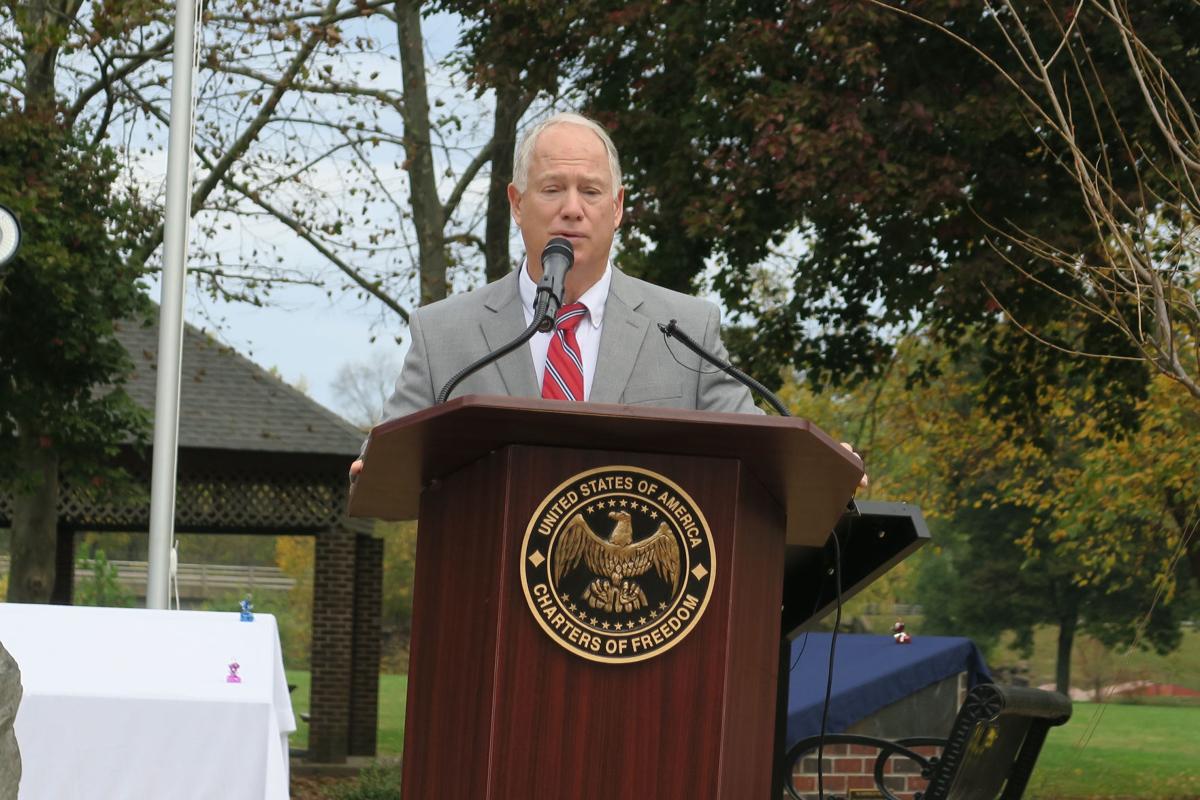 The colonial sound of fife and drum drifted from Yowell Meadow Park Saturday as nearly 200 people gathered on an overcast and muggy morning to honor and remember the American Revolution.

As communities nationwide tear down memorials to history, Culpeper dedicated new ones—a side-by-side display of the Charters of Freedom and a monument to the Culpeper Minutemen.

Navy veteran Randy Rastall, a Grenada and Beirut era serviceman, marched at the event with the VFW Color Guard. He plans to bring his grandchildren to see the attractive installation that includes replica, bronze copies of the Declaration of Independence, U.S. Constitution and Bill of Rights.

“The oldest one is a history buff —she will love it,” Rastall said. “The other young ones, I will teach them the history of the Constitution and the articles of freedom. Tell them the way it’s supposed to be—the way it is written in stone—for the people, by the people. I think maybe we need to bring the politicians down here and have them reread it.”

Fellow VFW Color Guard member Kerry Romesberg, an Air Force veteran, said the display is wonderful and in a perfect setting—the very area where the Culpeper Minutemen mustered in 1775 to fight the British in the Revolutionary War.

“A lot work was put into it,” Romesberg said, noting he too planned to bring his grandkids by. “The 18-year-old knows about it, the 16-year-old I’m not sure what he cares about and the 10-year-old will definitely read the whole thing.”

The project five years in the making started with the granite, engraved memorial to the Minutemen, an initiative originally of the late Lon Lacey, a member of the Culpeper Minutemen Virginia Sons of the American Revolution history and ancestry group. Compatriots Charles Jameson and Keith Price worked to bring the patriotic marker to fruition and along the way partnered with North Carolina-based Foundation Forward to add the document installation.

Saturday’s dedication attracted a cross-section of the community to an event at which deafening cannons were blasted, muskets fired, World War II planes flew overhead and tiny American flags were distributed by the local troop of American Heritage Girls. There were smoking guns, red-white-and-blue attire and reflections on the origins of the country.

“This memorial recognizes one of the most important parts our local history,” said Price, a Culpeper Town Councilman. That is, he said, the heroism of early town citizens who helped create the USA.

Culpeper Mayor Mike Olinger called it a proud moment, highlighting the role local residents played in winning American independence. The Charters of Freedom grew directly from those efforts, he added.

“This is the perfect spot for such a memorial,” Olinger said. “I’m sure many will stop to look.”

“It’s wonderful. We are very happy to see it,” White said, adding she hoped the founding documents would be a uniting force for local residents.

Added Flanagan, “It gives a sense of history.”

The original Culpeper Minutemen played an impressive role at the Battle of Great Bridge in 1775, noted Jameson, of the first major clash with the British in Virginia. A local African-American man, Billy Flora, though not remembered by history as a Minuteman did in fact fight alongside the Minutemen, Jameson said. A paver around the new installation records his name along with a dozen other local Black men or Natives who helped bring about American freedom from England.

“Many were listed at Yorktown with most serving three to five years,” Jameson said of his effort to “illuminate the forgotten patriots.

Carol Simpson, president of the Culpeper Minutemen Chapter of the Daughters of the American Revolution, said their group was proud to work with SAR to establish the monument and donate a bench. The display of the nation’s founding documents will allow local citizens access to reading the words and also to “remember how fortunate we are to live in the United States of America,” Simpson said.

Virginia DAR Regent LeAnn Turbyfill said the documents “remind us that freedom is not free.”

Culpeper Minutemen SAR member Bill Schewtke detailed the history of the early freedom fighters, noting the local battalion was the only one to reach full strength. The men were supported by families back home who took over businesses and farms without them, he said.

“We cherish their ideas today … the wonderful ideas that came of that Revolution,” Schewtke said. “All men are created equal,” an idea today’s society continues to work “to more perfectly apply,” he said.

North Carolina businessman Vance Patterson created Foundation Forward after he and his wife visited the National Archives nine years ago for the first time to see the actual founding documents. He came home with an idea to share the history around the country through the Charters of Freedom installments.

“I will never forget the first time I saw the Declaration of Independence,” Patterson said at Saturday’s dedication, reading off the names of the Founding Fathers who signed it. “I just got goosebumps.”

When he read the first words of the U.S. Constitution, “We the People,” Patterson said he got a lump in his throat: “It was really an emotional experience. I wanted to duplicate it.”

The first Charters of Freedom was dedicated in 2014 in his home-town and the Culpeper installment makes No. 31 and the first in Virginia. The purpose for the replica documents is to increase access, educate and build community, Patterson said.

The concrete foundation of the Charters goes down 3.5 feet and the life-size bronze documents are covered with treated, unbreakable polycarbonate, he said.

“Why are we doing this?” Patterson said of the cost shared by the Foundation and community partners. “It’s more important than money. It gives us a direct link to our Founding Fathers.”

The setting is not a monument, he added, but contains living documents that will provide a hands-on supplement for local schools. Visiting the display is something they will remember, Patterson said.

He encouraged adults to bring children to the setting to teach them: “Their freedom and rights as Americans gives them an advantage over the rest of the world.”

Underneath Culpeper’s copy of the U.S. Constitution will be placed a time capsule full of letters from groups and individuals expressing what the installation means to them along with items from today’s world. Foundation Forward will work to collect those items over the next 12 to 18 months before the time capsule is sealed. It will be opened up on Sept. 17, 2087—the 300th anniversary of the signing of the founding document.

Folks can also purchase pavers around the display for engraving in honor of groups, businesses, veterans or other loved ones. See chartersoffreedom.com/ for information.

Eastern View High School senior is college-bound, plans to aid overseas with Smile Train and wants to be a trauma nurse in the Air Force.

Members of the Culpeper Minutemen Sons of the American Revolution fire muskets Saturday in Yowell Meadow Park as part of the day’s monument and installation dedication.

A new monument to the Culpeper Minutemen Battalion was dedicated Saturday in Yowell Meadow Park. The stone came from Virginia Mist Quarry in Culpeper County.

The Capitol Wing of the Commemorative Air Force based at Culpeper Regional Airport flew various vintage aircraft, tipping their wings, over the Charters of Freedom dedication in Yowell Meadow Park.

A crowd of around 200 attended Saturday’s monument dedication in Yowell Meadow Park.