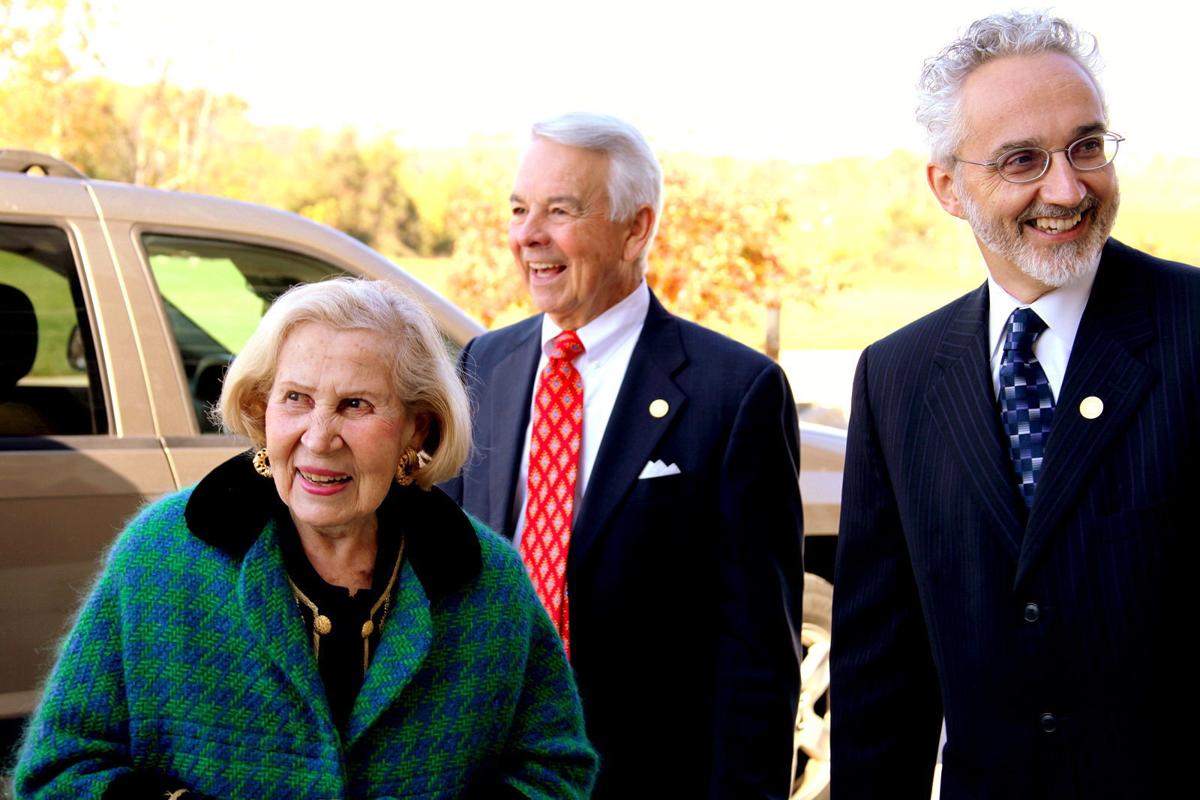 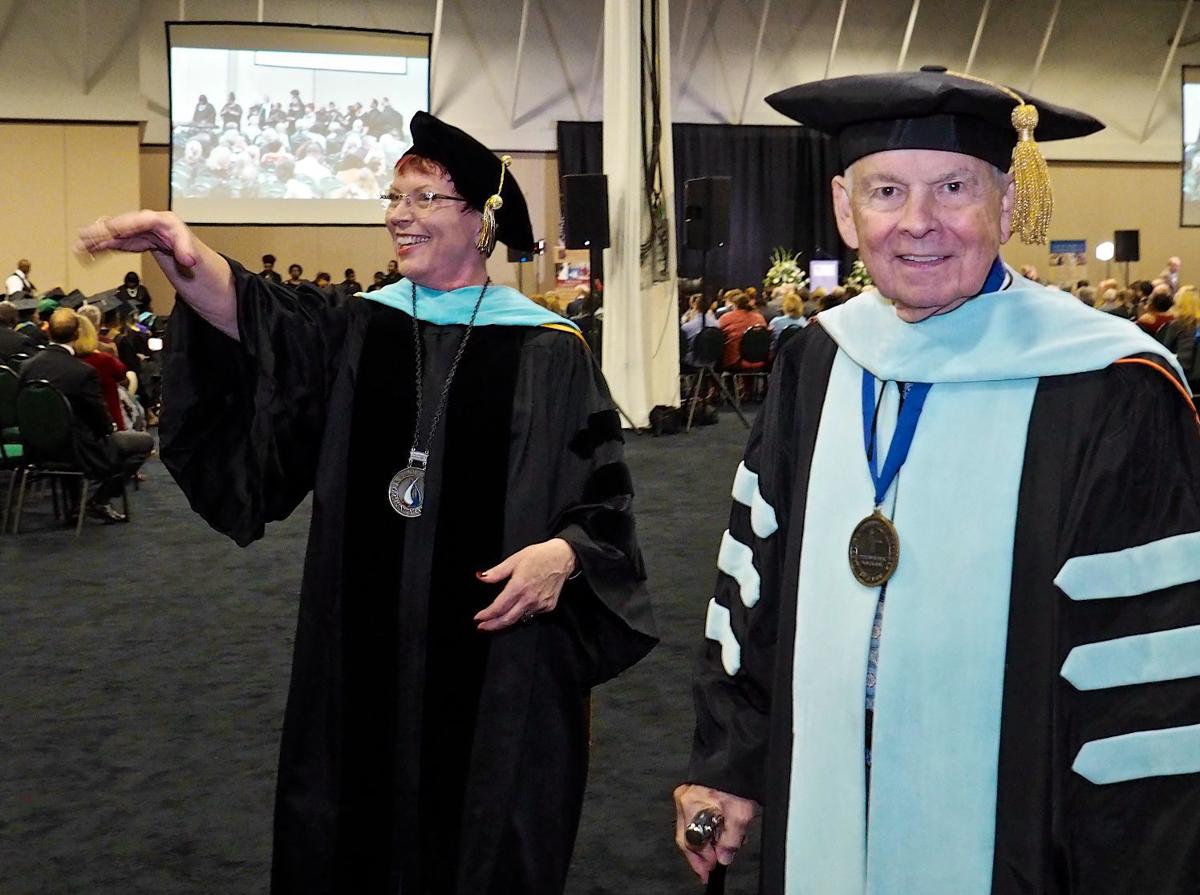 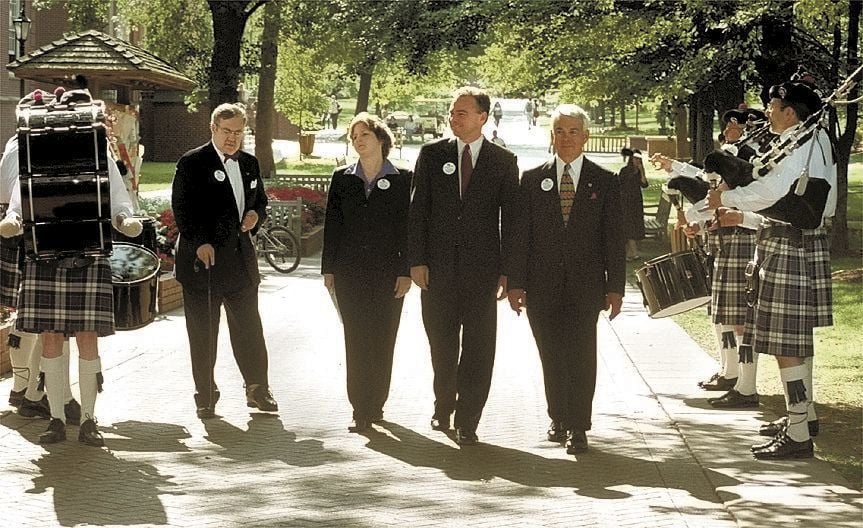 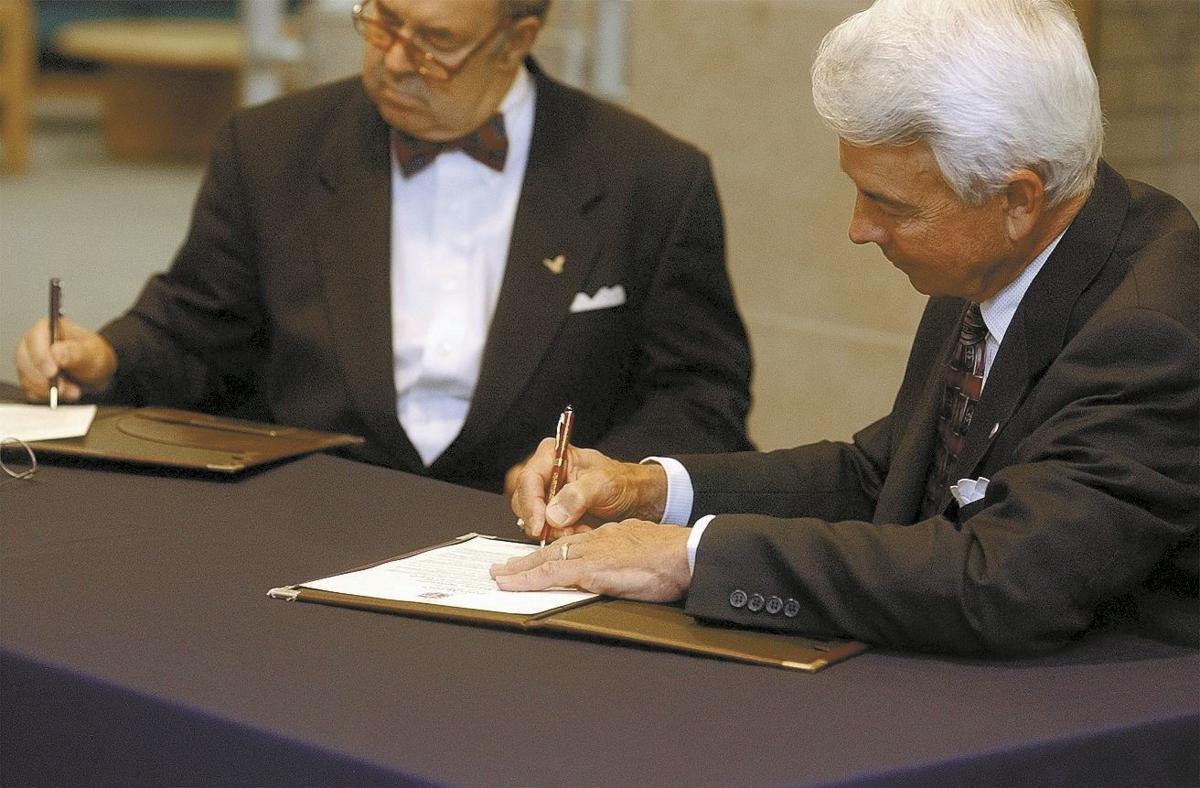 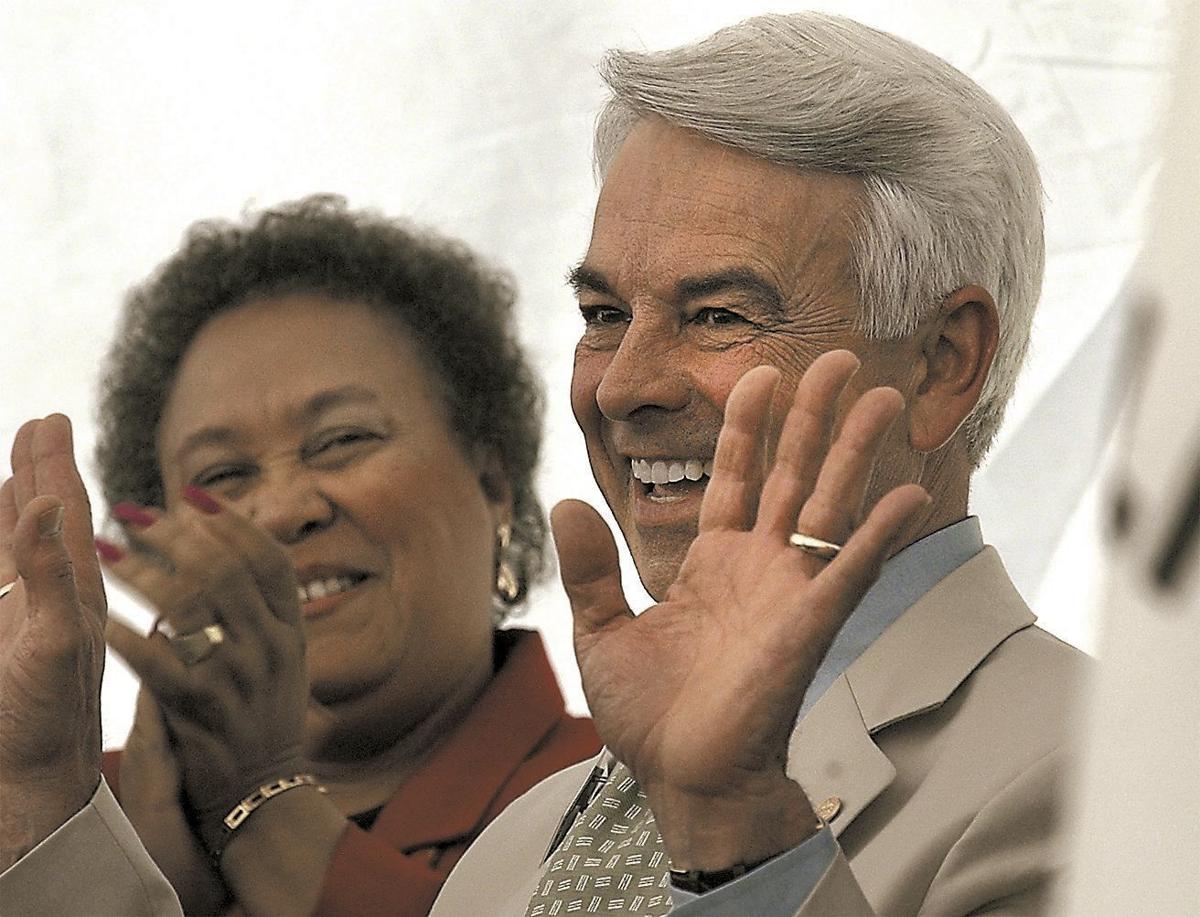 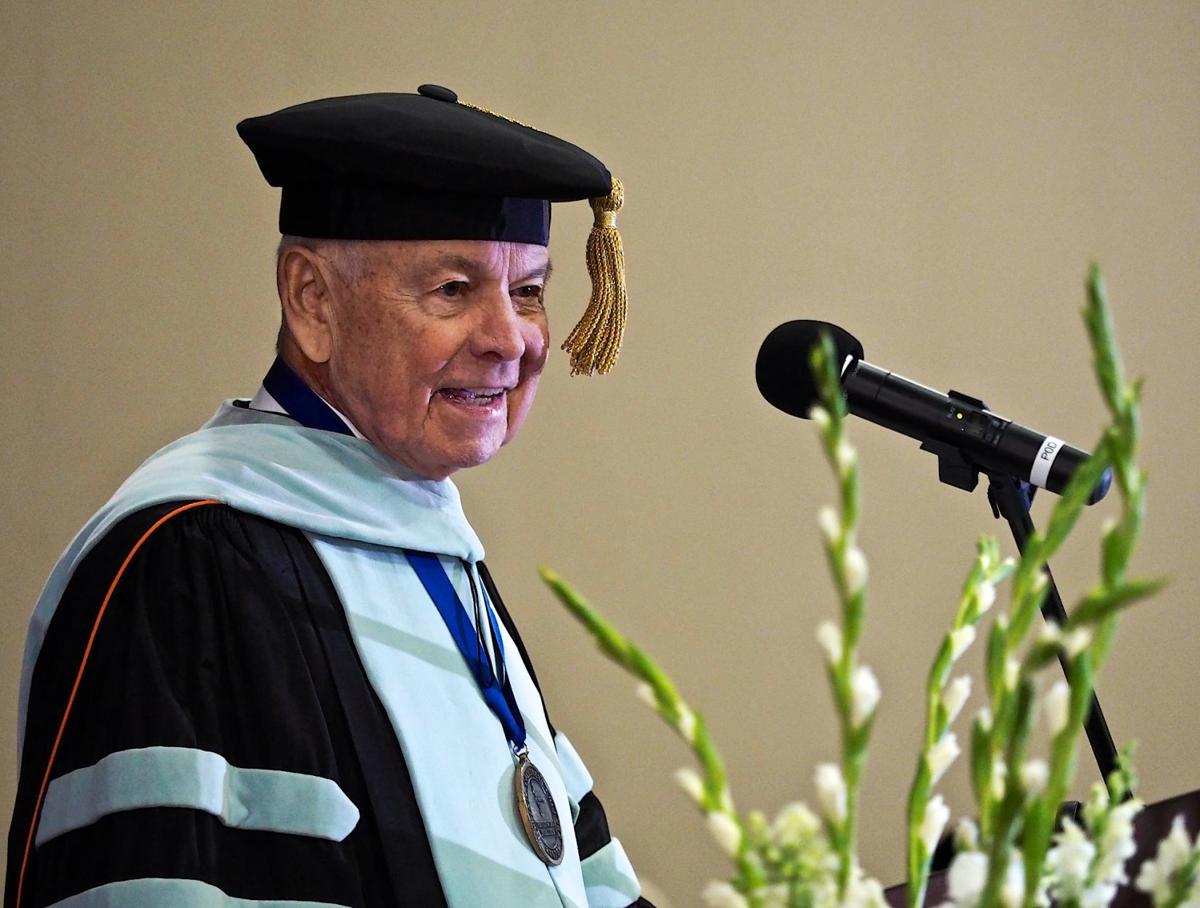 Turnage, 79, of Fredericksburg ensured that Germanna survived an enrollment crisis that threatened to close the school in the early 1970s, soon after it opened.

The location of the college’s original campus in Locust Grove, a political compromise, was inconvenient for residents in and near Fredericksburg and in Culpeper and western localities. The college’s founders had thought the area near the first campus in Orange County would grow far more rapidly than it did. But its distance from population centers hurt enrollment.

But Turnage saw Germanna through the predicament, and helped it become Virginia’s seventh-largest community college by adding campuses in Culpeper and Spotsylvania counties. Germanna’s Joseph R. Daniel Technology Center at U.S. 29 and State Route 3 in Culpeper opened in 2006.

Turnage is survived by Nancy, his wife of 56 years, children Wells and Noah, and five grandchildren.

A visitation for friends and family will be held from 6 to 8 p.m. Tuesday, Feb. 26, in the Workforce Building at Germanna Community College’s Fredericksburg Area Campus.

The funeral will be held at 1 p.m. Wednesday, Feb. 27, at The Presbyterian Church of Fredericksburg, 810 Princess Anne St., with a reception afterward at the church.

Burial will be private in Snow Hill, N.C.

Henry’s Funeral Home of Staunton is handling the arrangements.

Dr. Janet Gullickson, Germanna’s current president, expressed her regard and affection for her colleague.

“For two critical decades, Dr. Frank Turnage was the face and soul of Germanna,” Gullickson said Wednesday. “His foresight, his wise leadership style and the sheer power of his personality guided GCC through its early years of thin enrollment and then toward expansion and rapid growth.”

“He remained a beloved figure at Germanna long after his retirement in 2007,” she added. “We will miss him. Our thoughts are with his wife, Nancy, and his family.”

Glenn DuBois, chancellor of the Virginia Community College System, worked with Turnage for about a decade when he was Germanna’s chief. He praised his “long—maybe the longest—distinguished career with the VCCS.”

“Frank always had a smile, saw the best in people and was loved by all,” DuBois said. “It was my good fortune to have him as a colleague and as a friend.”

Turnage set the stage for the college’s explosive growth, playing a pivotal role during localities’ debate over whether to build its Fredericksburg Area Campus in Spotsylvania County. Opening that campus in 1977 was the key to Germanna’s enrollment growth, Turnage said in an interview last fall.

Turnage said in a video interview shot in preparation for Germanna’s 50th anniversary in 2020 that it was a struggle to persuade local and state officials to support construction of that campus, which now serves the most students of any Germanna location.

Culpeper resident Connie Kincheloe said Turnage’s drive was crucial to convincing powerful state Del. V. Earl Dickinson to support the effort. The first building at the college’s Fredericksburg Area Campus was named for Dickinson in appreciation of his support. Turnage oversaw its fundraising, construction and opening.

“Frank is the reason I became involved with community colleges,” Kincheloe said. “He reached out to me and asked me to work with Germanna, and it was one of the best things I’ve ever done. Community colleges are my passion, and it’s largely because he inspired me. I’m sad he’s gone, but I just feel so honored that I had the opportunity to know and work with him.”

“He was one of the dearest men I’ve ever met—so genuinely interested in you and everybody else,” she added, “but boy was there an underlying determination and strategy about the way he worked. It took us a long time to get that Daniel Center done.”

The center’s namesake, Culpeper businessman Joe Daniel, remembers Turnage as “a gentleman of the first order.”

“He was quite a visionary and committed to Germanna and higher education and to the communities he served and he worked very hard,” said Daniel, a longtime member of the Germanna Community College Educational Foundation. “He was a wonderful friend to me and to many others, and a very kind spirit.”

The two-year public college, which opened in 1970 with about 400 students on a small campus near Lake of the Woods in eastern Orange County, now serves a student population of about 13,000. Its students pursue academic courses and workforce development in the counties of Culpeper, Caroline, King George, Madison, Orange, Spotsylvania, Stafford and the city of Fredericksburg.

In Culpeper, Frank Turnage Drive on the college’s Joseph R. Daniel Technology Center campus is named for him. One property there, where Turnage Drive meets McDevitt Drive, may soon become home to three 290,000-square-foot data centers that will employ about 150 workers.

Dr. David A. Sam, Germanna’s president from 2007 to 2017, lauded his predecessor for smoothly handing over the reins to him.

“Frank Turnage will be remembered by all as a true Southern gentleman—in the best sense of that term,” Sam said. “His grace, courtesy, quiet but strong presence and the respect he earned in his two decades as president of Germanna are why he was able to take a struggling college and lead it to become a valued resource for students and their families, and for businesses and their employees.”

In 2006, the Virginia Senate and House of Delegates passed a resolution commending Turnage for guiding Germanna “from a small, remote community college to an influential educational force in the region by providing workforce development and the opportunity of higher education to all of the residents of the community.”

The same year, a Free Lance-Star editorial about his retirement said Turnage “looked at the employers in the community and saw how Germanna could help them train their workers. He gazed west, toward the businesses in the Route 29 corridor, and saw the need for technology education. He recognized the shortage of health-care workers and joined a statewide task force on nursing education to help community colleges alleviate it.”

A North Carolinian who was the first in his family to graduate from college, Turnage also played a major role in cultivating Germanna’s highly regarded nursing program.

Born in a farmhouse at his family’s corn and dairy operation in Snow Hill, N.C., the son of Henry Bailey and Mary Anna Sugg Turnage, he grew up with his younger brother, Henry Euscebius “Cebe” Turnage, in eastern North Carolina.

He worked in a grist mill built by his grandfather, and was surrounded by a loving circle of aunts—Annie, Lucy and Payne—who encouraged him to pursue a college degree, his son Wells Turnage, of McLean, said in an interview.

Turnage graduated in 1961 with an English degree from Duke University, where he met Nancy Louis Well. They married in the university chapel.

In 1967, Frank moved to Virginia and started his career with the Virginia Community College system as director of the Learning Lab at Blue Ridge Community College in Weyers Cave. He advanced through administrative posts until he was made the college’s vice president/dean.

“At Blue Ridge, Frank learned firsthand the impact that adding programs and buildings can make on a community and in the lives of students,” Wells said.

In 1970, he took a pay cut to move to Fredericksburg and become president of Germanna, which had a smaller enrollment than Blue Ridge.

Turnage started the nursing program at Blue Ridge, was a founding member of Virginia Partners Bank, and served on Stratford Hall’s board and as president of the Rappahannock United Way.

A friend of famed Virginia nurseryman Andre Viette, he was a lifelong rose grower, well known on Hanover Street in Fredericksburg and in the Shenandoah Valley’s garden-club circles for his hybrid tea rose gardens.

“Frank was just a smart, nice person,” O’Neill said. “You’d never knew he was the president of a college. I enjoyed his friendship. He was very outgoing and so was his wife, Nancy. He was very active in the community, and he will be missed.”

Donations in memory of Frank Turnage may be made to The Turnage Legacy Fund (540/423-9060 or foundation@germanna.edu) of the Germanna Community College Educational Foundation, which supports the Germanna Guarantee Program that he and local donors started when he was the college’s president. The program pays the educational expenses for any student in financial struggles.