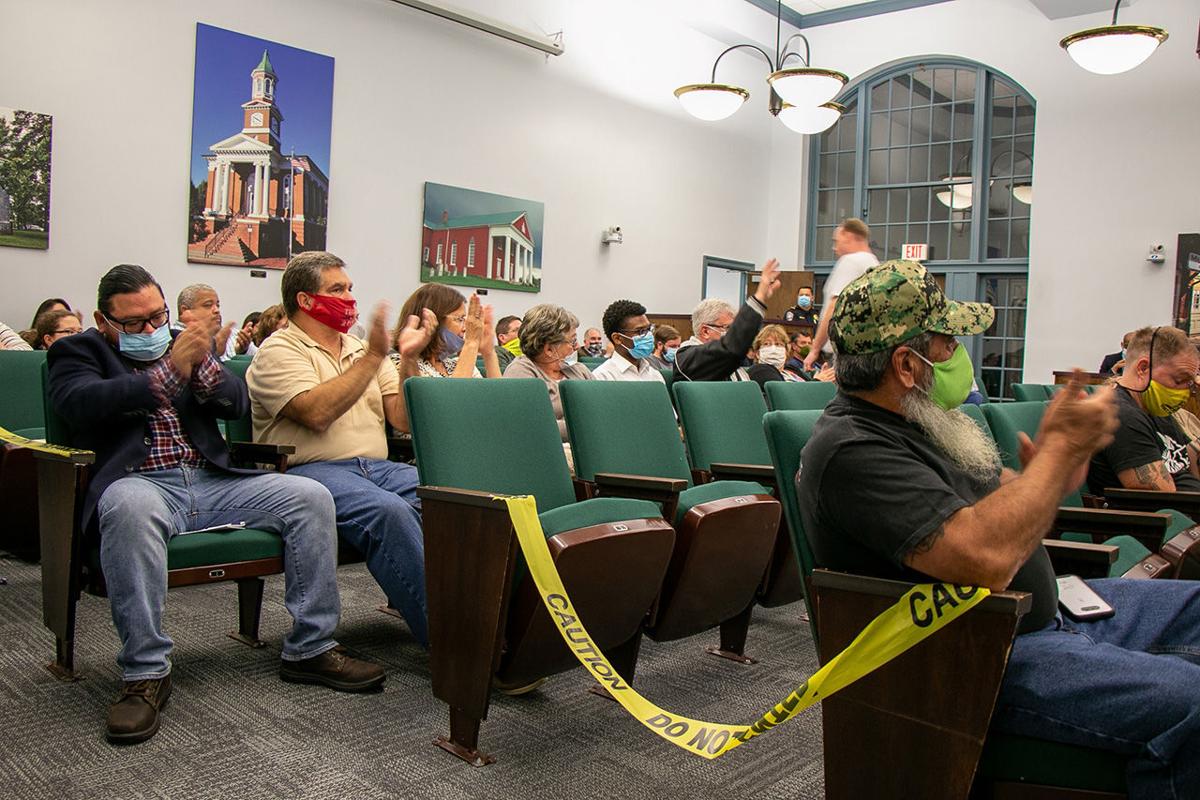 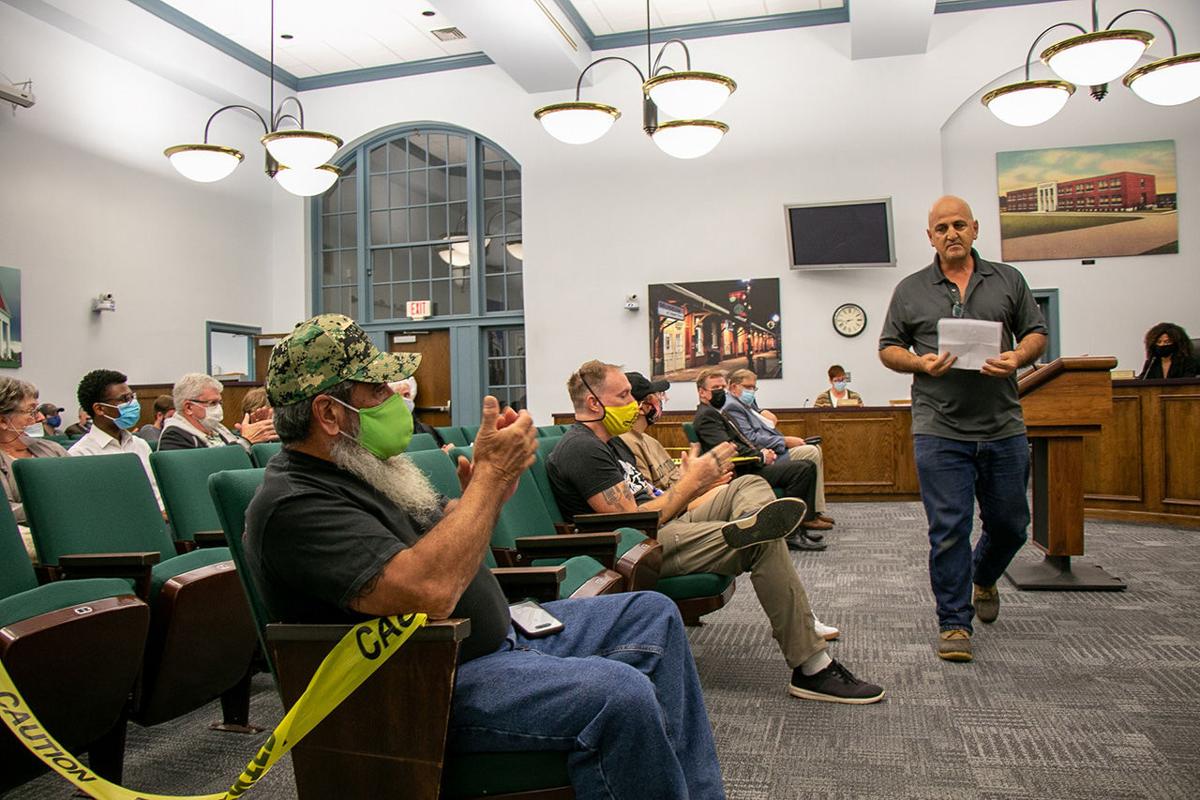 Paul Moog with Virginia Citizen Defense League leaves the podium after speaking in support of a resolution against gun-free zones at Tuesday’s Culpeper Town Council meeting. 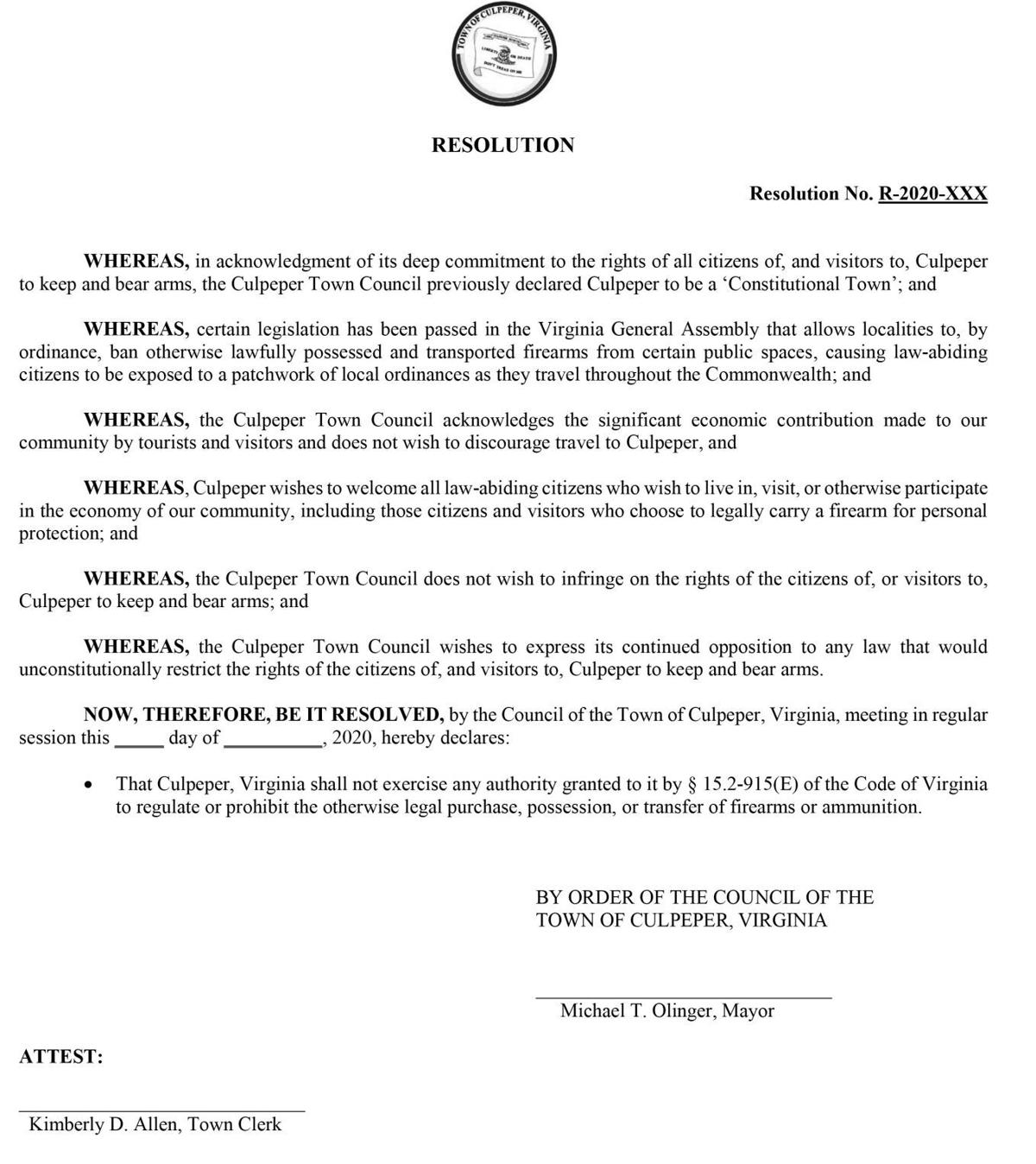 This story has been edited from its original verison.

Support among town leaders for a Christmas parade in a pandemic was not unanimous even as two local veterans publicly declared their intent to run for local office next year.

Such was Tuesday night’s Culpeper Town Council meeting held in the county administration building with a larger-than-usual audience attending to (mostly) express support for their right to bear arms.

The gathering, with its high emotions and range of opinions, felt like a microcosm of the national political scene.

On the town agenda, placed there directly without the usual committee discussion, was “Consideration of Resolution Regarding Second Amendment Rights.” The effort, initiated by freshman Councilman Keith Brown, is part of a continued, statewide, Republican-led movement pushing back on gun control bills enacted in June by the Democrat-majority Virginia General Assembly.

Among those is one allowing cities and counties to enact “gun free zones” on public property such as parks and buildings. The nine-member town council, like the county board of supervisors previously declared it was a gun rights sanctuary, and has no intention of establishing any such local law. Other localities, including Newport News, Alexandria and Charlottesville, have.

Adopting the resolution, said Brown, was about being proactive. He stated town council needed to respond to “all the things we have seen going on in Richmond.”

“We need to protect the town,” he said.

Council members Jamie Clancey, Keith Price, Pranas Rimeikis and Meaghan Taylor opposed the measure. Price said while he recognized the importance of the symbolic resolution as, “a statement of principle,” he didn’t see how it would change anything.

“It gives me mixed feelings,” he added, warning against future measures from any council member seeking to “advance their point of view.” Price said it wasn’t a good use of time.

Councilwoman Clancey agreed with Price and further said that the gun resolution would cause division among townsfolk: “It would make a statement not passing it,” she said, noting there had been no conversations among the town council about establishing gun free zones.

Clancey said the town should consider establishing perhaps a hunger-free zone or programs supporting kids and families. She said the resolution, “Doesn’t really make sense here in Culpeper” and is “creating a problem that doesn’t exist.”

Mayor Mike Olinger paid attention to the crowd of less than 40 supporters who sat in a distanced fashion in the boardroom Tuesday night.

“We’ve never had a group of people as passionate as you all show up to a meeting,” he said. “It may not seem big to us, but it is to you … I will support it.”

Councilman Jon Russell said while the resolution is not necessarily legally binding it makes a statement.

“We didn’t ask Richmond to allow us to pass gun-free zones. I don’t want that power,” he said. “I want to make a statement back to them—you can take that power and keep it with yourself.” Russell added people who complain about creating division “don’t like what the other side has to say.”

Nine people addressed council in support of the resolution during the public comment period, and one against it.

Resident Alexander Valle said gun-free zones achieve nothing and are another way to disarm law-abiding citizens in Virginia. Organizer of last weekend’s Hispanics for Trump Rally in Yowell Meadow Park, Valle closed his remarks Tuesday night by announcing his candidacy for town council in the 2021 election.

Town resident Courtney D’Avilar, a member of the local GOP committee, spoke of two incidences in Yowell Meadow during which a man exposed himself indecently. Police responded within five minutes of him reporting it, D’Avilar told council Tuesday night.

As he waited, “I felt helpless and vulnerable beyond words,” D’Avilar said. “Would it have happened if I was armed?” He said, “No one should be unable to defend themselves anywhere in this town.”

Town resident James “Fred” Sapp, an Army veteran, said he was embarrassed at the need to speak in support of the pro-gun resolution. He said local citizens should be able to “move about without having to worry about a gun-free zone.” Sapp then too announced his candidacy for town council in 2021.

One speaker said gun control laws are not needed and that laws don’t stop criminals from doing wrong if the intent is there. A gun is a tool just as much as a hammer is, the man said, and both can cause harm if in the hands of criminals.

Town resident Ian Fitzsimmons spoke against the resolution, saying passing it required broader consensus from the community. He said council action needed to “represent the entire community, not a special interest group.”

In a country polarized by vicious political rhetoric, “Culpeper is a little island of civility,” Fitzsimmons said. The resolution will only “drive a wedge,” he added. “Culpeper is better than this.”

From the gun discussion, town council went on to disagree about approving street closures for the Dec. 6 Culpeper Christmas Parade Sponsored by Sheriff Scott Jenkins. The vote was 7-2 in support of the action with Clancey and Taylor voting nay.

Town council approval of the street closures, however, was contingent on the parade adhering to the most recent executive order of the state regarding the ongoing pandemic, said Town Manager Chris Hively. It was revealed at Tuesday’s meeting that the local health department denied the request for a traditional parade.

Whitney Wright, environmental health manager with the Rappahannock-Rapidan Health District, sent a series of emails last week to the town and sheriff’s office.

“We have outlined some options for how a parade might be allowed this year under the Phase 3 (reopening) guidelines, however a conventional parade will not be allowed,” he wrote.

Wright said he attended a state meeting in Richmond last week and asked about parades. Due to the nature of such events in terms of crowd control of attendees on foot, they are a no-go, he said.

“The good news is there are alternatives … where you have a reverse parade (in which) the floats are still and you have participants drive by in their vehicles to view the floats,” Wright stated in the emails of how it will be done in Fredericksburg.

The city of Richmond is filming its holiday parade at an undisclosed location and will broadcast it on social media and TV in early December and on Christmas, he said.

Hively said it was town administration’s understanding that VDH has been tasked by the governor to enforce all current executive orders and that holding the parade would not be a town decision. Councilman Russell asked the town attorney for his opinion on that.

“VDH has power of a legislative decision of local government—(that’s) a surprise to me,” Russell said.

“There are certain members (on council) that don’t want a Christmas parade—they fight it tooth and nail,” Brown said, directing his remarks at Rimeikis.

Some on council have expressed concern over the religious nature of a town-sanctioned event and potential liability and now, a potential lawsuit if someone gets sick from COVID-19 while attending the parade organizers estimated would attract 500 to 900 people. Per current state order, social gatherings should be limited to 250 people or less.

Rimeikis called Brown’s remarks “false comments” and that his parade concerns have always been about public safety and liability. Brown said, “People should have a right to decide about their own health.”

A parade update from organizers from the sheriff’s department, Marshall Keene and John Jenkins, was not immediately available. Hively emphasized Tuesday’s approval of town street closures for the event was contingent on VDH approval.

New study: If 95% Americans wear masks it would save 130K lives

New study: If 95% Americans wear masks it would save 130K lives

Paul Moog with Virginia Citizen Defense League leaves the podium after speaking in support of a resolution against gun-free zones at Tuesday’s Culpeper Town Council meeting.