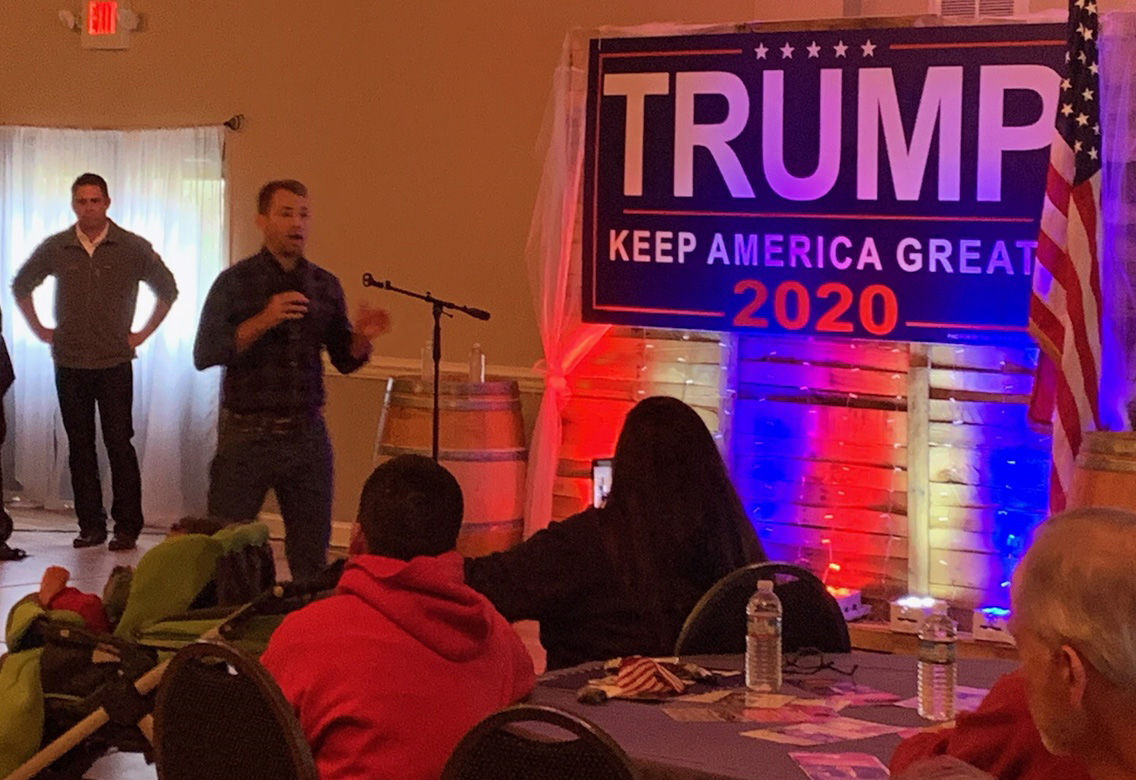 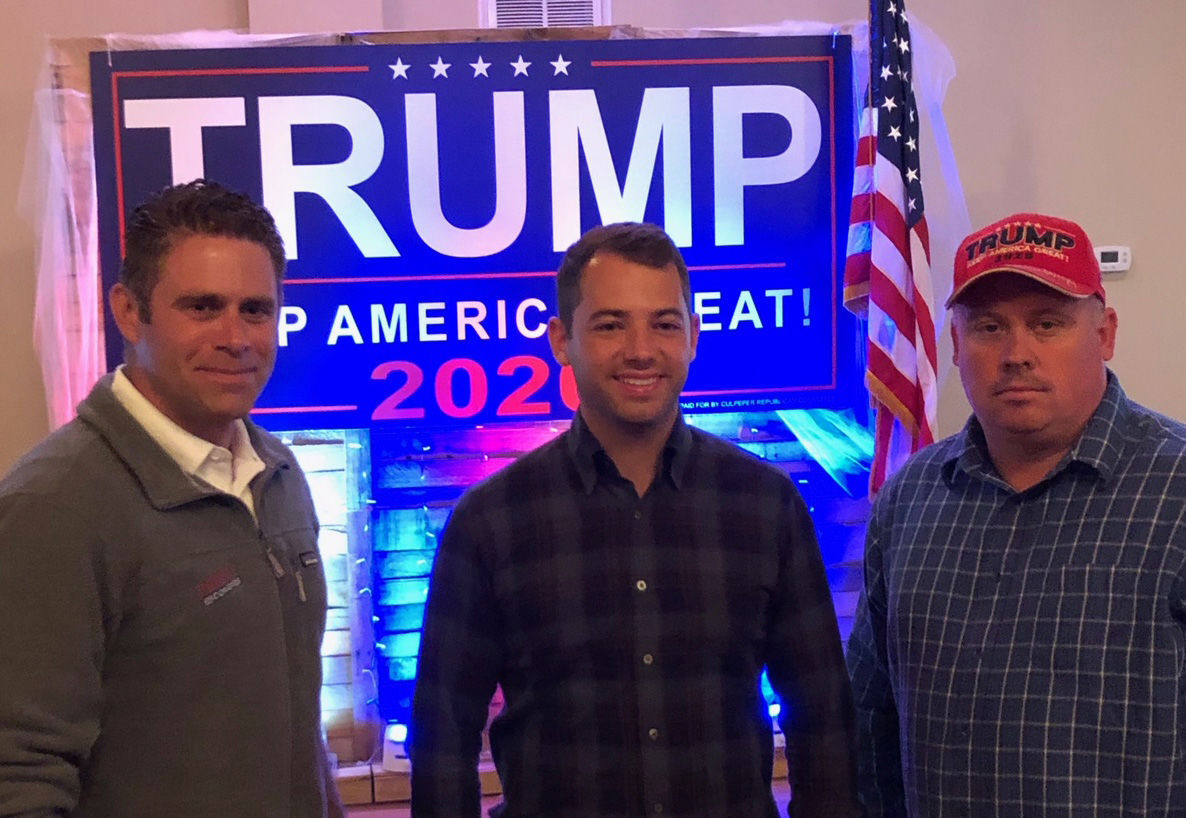 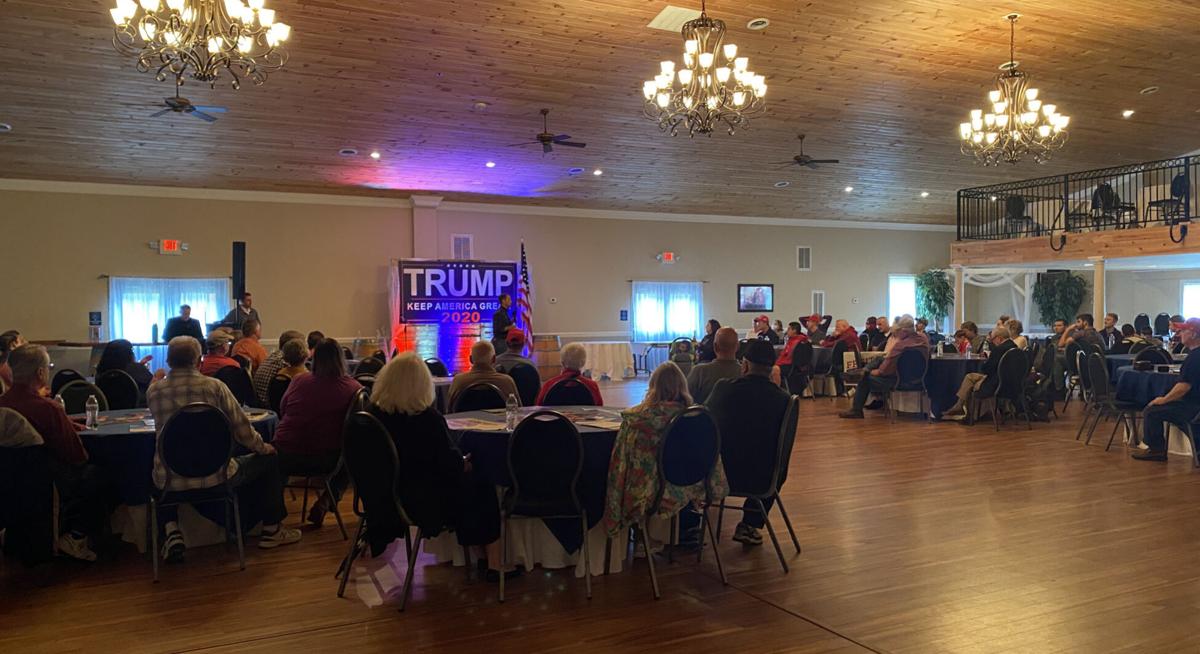 An estimated 100 people attended a Get Out the Vote Trump rally Sunday at Tuscany Hall in Culpeper.

An estimated 100 people attended a Get Out the Vote Republican rally Sunday at Tuscany Hall in Culpeper County with special guest, John Pence, a senior advisor for the 2020 Donald Trump presidential campaign – just about three weeks prior to the Nov. 3 General Election.

“(It’s) my Uncle Mike, but he’s got a day job-he’s the Vice President,” said John Pence, nephew of Vice President Mike Pence, addressing the local crowd seated at tables in the open venue. “First time he ran for Congress he ran for three things – for faith, for family and freedom. And ever since then, since 1988, he has been fighting for those three things.

Continued rain moved the rally last-minute from outside the Culpeper Republican Committee headquarters on Main Street to the indoor venue on Kettle Club Road, five miles outside of town. 7th District Congressional candidate Nick Freitas attended the rally and spoke in support of the Republican ticket and his bid to unseat incumbent Rep. Abigail Spanberger, a Henrico County Democrat.

The Republican National Committee took note of the local event.

“In case you missed it… Trump Campaign Senior Advisor John Pence and GOP Congressional Candidate Nick Freitas energized a crowd for Trump Victory’s National Weekend of Action and to get out and vote for President Trump and the GOP ticket before the General Election in November,” RNC regional spokeswoman Molly Safreed wrote in an email to the Star-Exponent.

According to the RNC, the Trump campaign in Virginia has connected with more than 2.2 million residents this campaign season. The incumbent Republican president easily won Culpeper County in 2016, and local GOP Chairman Marshall Keene expects the same in 2020. He said the goal is 65 percent of the vote for Freitas and Trump.

“We need to come out on the other side of 2020 on the path towards rebuilding the great economy we had in 2019 under President Trump,” Keene said. “There’s no doubt that Trump and Freitas are the candidates we need to lead this economic recovery and Keep America Great.”

Also on Sunday, Rep. Spanberger visited with local press and supporters in Culpeper County in an outdoor setting. See Wednesday’s Star-Exponent and online at starexponent.com for coverage of the Democratic congresswoman’s local campaign stop.

An estimated 100 people attended a Get Out the Vote Trump rally Sunday at Tuscany Hall in Culpeper.