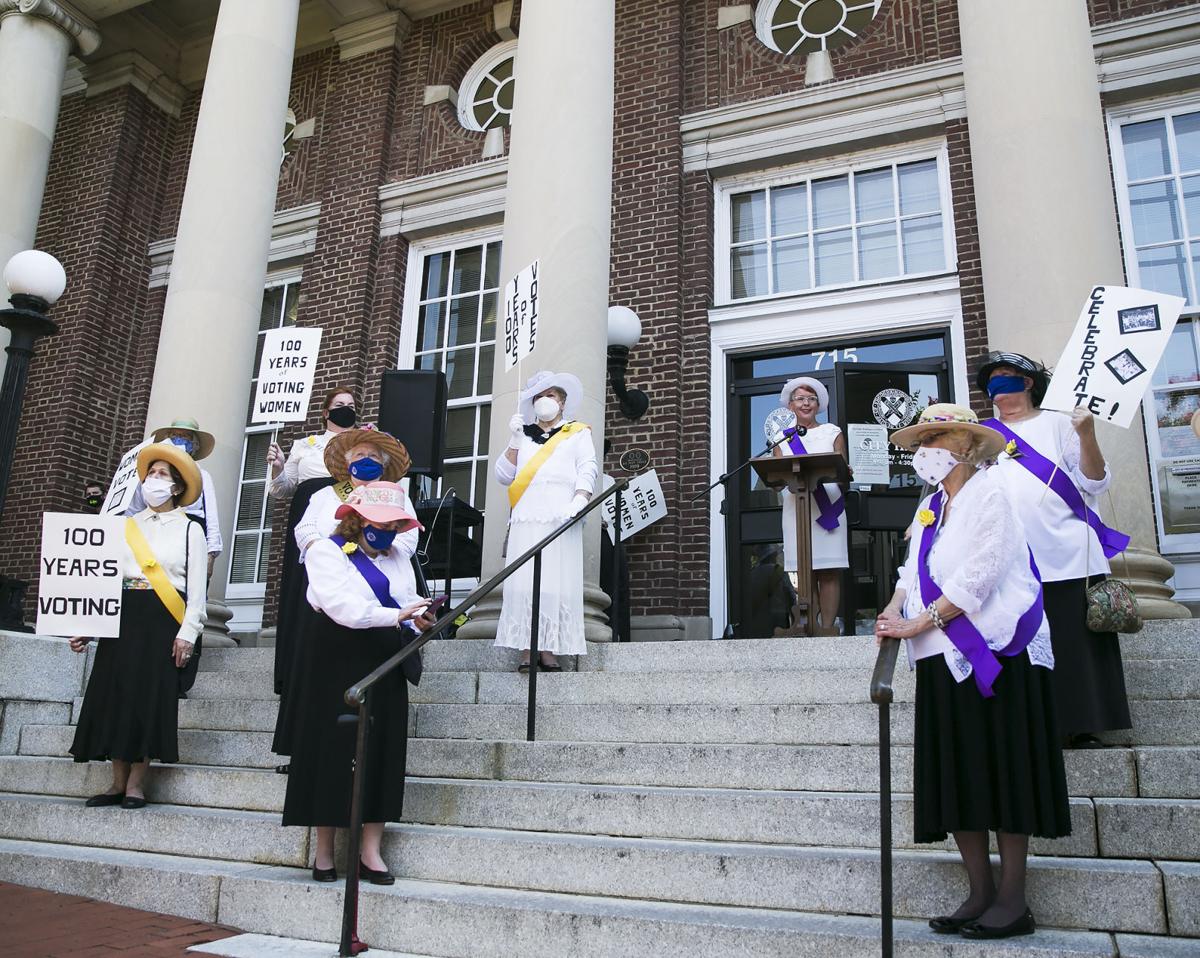 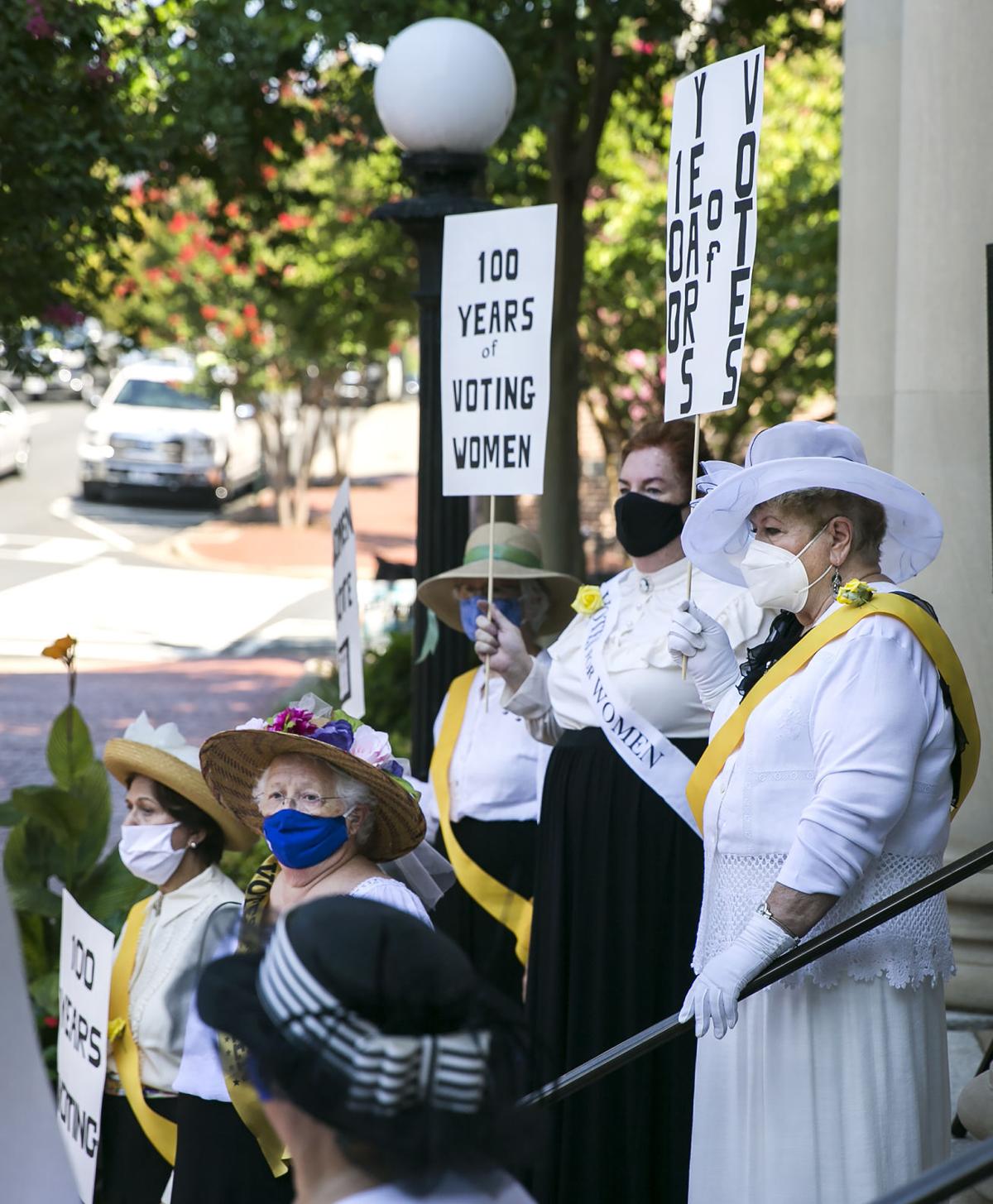 Members of the Woman’s Club of Fredericksburg wear suffragette-style clothing during a celebration marking the 100th anniversary of the 19th Amendment at Fredericksburg City Hall on Wednesday. 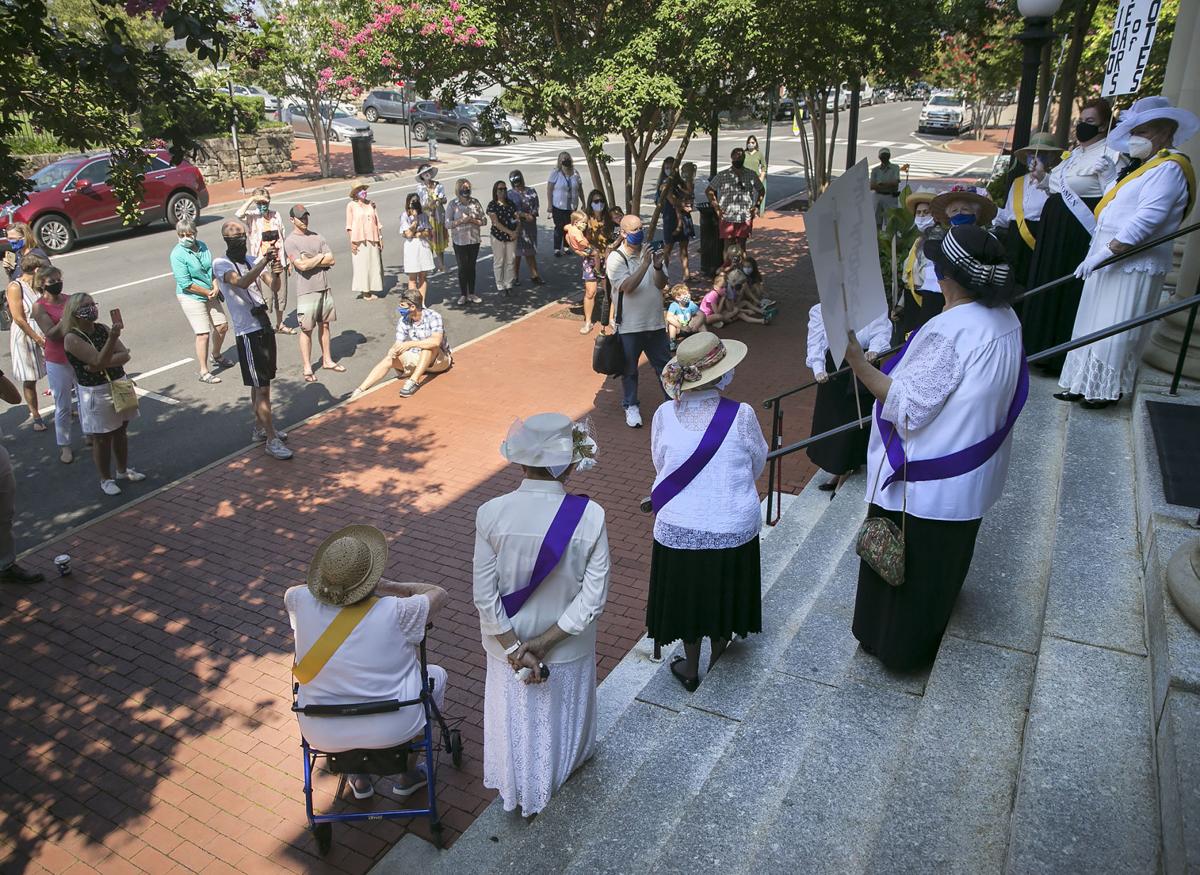 People gather to listen to speakers at a Wednesday program at Fredericksburg City Hall marking the 100th anniversary of the 19th Amendment. Members of the Fredericksburg Woman’s Club organized the celebration.

Susan B. Anthony walked into a Rochester, N.Y., barbershop that doubled as a voter registration office on Nov. 1, 1872, and threatened to sue startled officials unless she was allowed to register to vote.

The suffragist was arrested and charged with voting illegally after she cast a ballot for Ulysses S. Grant four days later.

Anthony wouldn’t live to see Secretary of State Bainbridge Colby announce on Aug. 26, 1920, that the 19th Amendment guaranteeing women the right to vote had been formally adopted into the U.S. Constitution.

But four prominent Fredericksburg-area women referred to the decades-long struggle Anthony and other suffragists underwent and urged everyone to exercise the hard-won right to vote in a 100th anniversary celebration held Wednesday on the front steps of Fredericksburg’s City Hall.

Organized by the Woman’s Club of Fredericksburg, the gathering also included about a dozen members who wore yellow roses, a symbol of the women’s suffrage movement, and hoisted signs reading “100 Years of Voting Women” “Women Vote” and “Celebrate.” A crowd of about 50 people, including some parents who brought their children, gathered to watch.

“We stand today on the shoulders of hundreds of women, hundreds of women. We know many of their names and there are so many that are not so familiar, but we are indebted, absolutely indebted, to the women who fought so long and so hard along with Susan B. Anthony,” said Greenlaw, who became Fredericksburg’s first female mayor in 2012.

She added that “this was a very important milestone in an unfinished journey” since it took a number of subsequent laws to ensure equal access to the vote for all citizens.

Greenlaw then read a proclamation that noted that the 19th Amendment fundamentally changed the role of women in the country’s civic life, and that women today are running for public office in unprecedented numbers. It also encouraged all citizens to commemorate and declare the week of Aug. 26 as the 100th anniversary of the passage of the 19th Amendment.

Catlett, who is the city’s first Black superintendent, pointed out that the 19th Amendment gave only some women the right to vote, since segregation was still the law of the land. She paid tribute to the many Black women who participated in the suffrage movement.

These included activist and journalist Ida B. Wells, who planned to march with the Illinois delegation in the first suffrage parade in Washington in 1913. Wells was told to either not participate or to march in the back, and initially complied by falling back to the rear of the parade. But she “courageously emerged from the crowd halfway through the march and claimed her spot alongside the white participants from Chicago,” Catlett said.

Founders of Catlett’s beloved sorority, Delta Sigma Theta, were at rear of the parade, too, and “were met with cheers and jeers,” the superintendent said.

“They were spit on, beaten, slapped, and bystanders tried to pull them off the float. They persevered, and were instrumental in the fight for the right to vote for all women,” she said.

That process would take 50 years after the 19th Amendment was approved, she said, due to such discriminatory practices as poll taxes and Jim Crow laws. Because of the efforts of brave women such as Wells and others, “it is unacceptable to not exercise the right to vote,” Catlett said to applause.

Gullickson, GCC’s first female president, also urged people to register to vote if they hadn’t already, learn about the candidates and issues, and to talk to their children about the importance of voting in the upcoming presidential election. She said that her mother, a school teacher who was born in 1921, never failed to vote, and would tell people if she were here today not to neglect that right.

“It is the single most powerful weapon in any kind of democratic change in our great country,” Gullickson said.

“There are so many people now in our society who brag about things which aren’t democratic with a small ‘d,’ which aren’t what our foremothers had in mind,” Gullickson said. “You brag about your vote, because by exercising that vote, we are changing our country.”

Bohmke ended the program by talking about that fateful day in 1871 when Anthony was arrested for voting, and the speech she gave in defense of her actions. In it, she pointed to the preamble to the Constitution, which begins: “We the people of the United States.” Anthony argued that it did not say “the white male citizens; nor yet we, the male citizens; but we, the whole people, who formed the Union.”

Not giving women the right to vote “was downright mockery of the democratic republic government, as she stated,” Bohmke said.

Anthony’s words didn’t impress the federal judge, who ordered the jury to find her guilty. The 19th Amendment wouldn’t be ratified until Aug. 18, 1920, when Tennessee became the 36th state to pass ratification by one vote. Virginia, which voted no in 1920, didn’t show its support for women’s suffrage until it officially ratified the 19th Amendment on Feb. 21, 1952.

Today, women not only have the right to vote, but Bohmke is one of four women, including the first Black female, who serve on the Stafford Board of Supervisors.

“I am very proud to be an elected official in Stafford County and I truly believe that a mix of men and women on any elective board is really best for the community,” she said. “I am very thankful for the opportunities that I have had as an elected official to make critical decisions that affect our community and our region.”

A Spanish banana farmer grapples with a volcano's wrath

A Spanish banana farmer grapples with a volcano's wrath

Members of the Woman’s Club of Fredericksburg wear suffragette-style clothing during a celebration marking the 100th anniversary of the 19th Amendment at Fredericksburg City Hall on Wednesday.

People gather to listen to speakers at a Wednesday program at Fredericksburg City Hall marking the 100th anniversary of the 19th Amendment. Members of the Fredericksburg Woman’s Club organized the celebration.