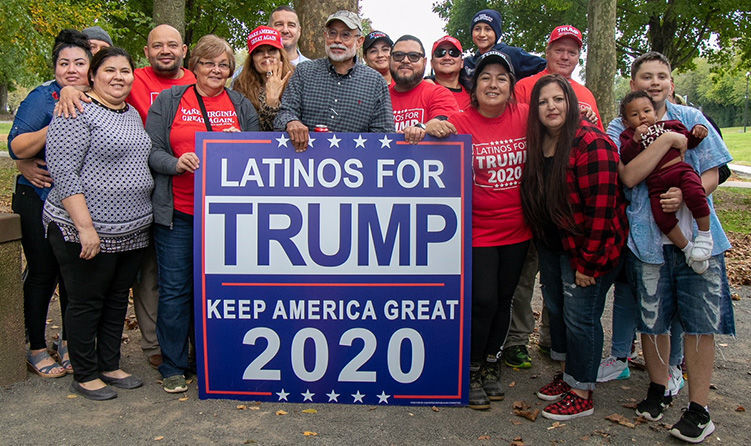 A group photo from Saturday’s rally in Yowell Meadow Park. 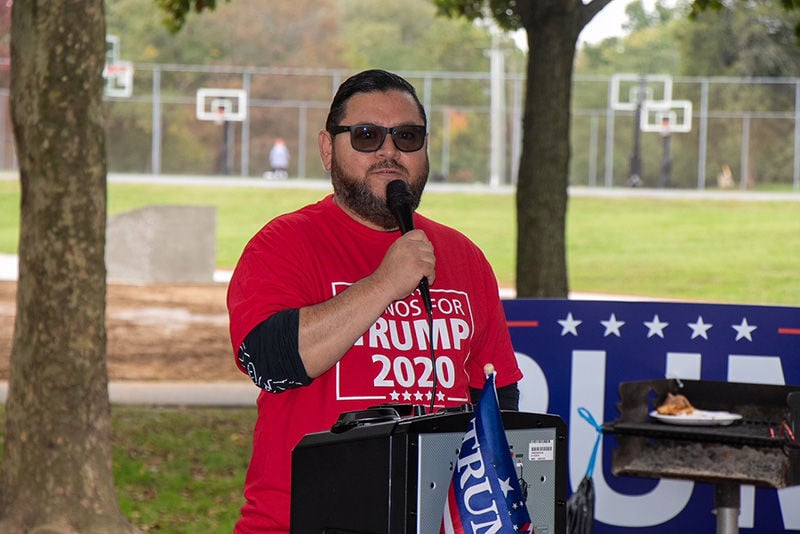 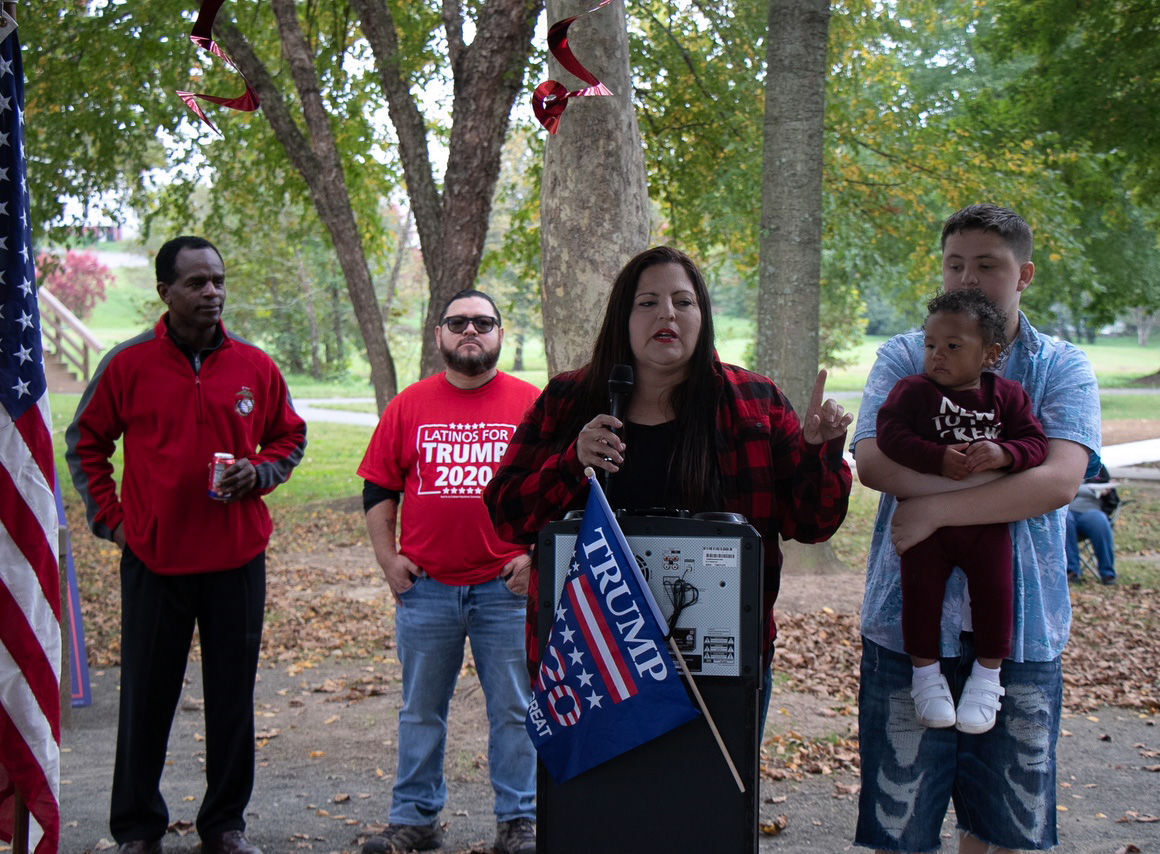 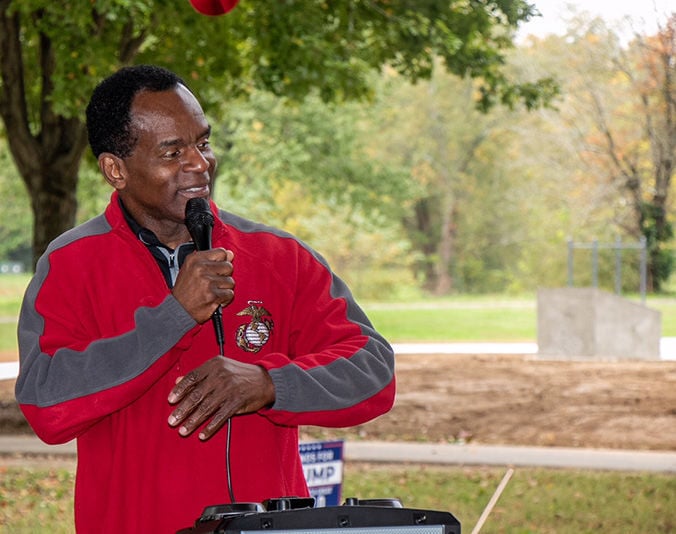 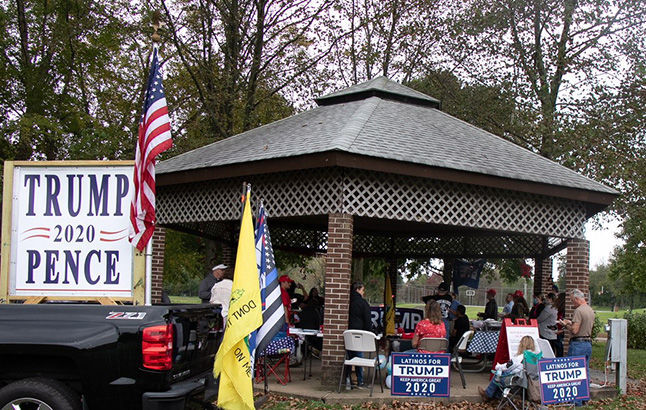 Event organizers say an estimated 80 people visited this past Saturday’s Latinos for Trump Rally in Culpeper.

Alexander Valle grew up in a Democratic household and he voted for Barack Obama. An independent at one time, the 49-year-old Marine veteran also voted for George W. Bush.

“I usually vote not for the party, but for the person,” Valle, a town of Culpeper resident, said in a phone interview on Tuesday. “As I have gotten older, my values are more aligned with the Republican Party.”

A defense contractor and family man, Valle organized last week’s Latinos for Trump Rally in Yowell Meadow Park to show his support for the incumbent. He was born in New Jersey to Honduran parents and raised in Florida.

Valle has called Culpeper home for the past 15 years, ever since he retired from the military.

“I came up with the idea, do a little cookout, meet some new residents, new people that are Republicans, but they never had the chance to attend a Latinos for Trump Rally,” he said.

An estimated 80 people passed through the weekend rally, Valle said, hailing from various counties. An article last week by Spanish-American NBC TV station Telemundo about Culpeper and the election for which he was interviewed helped get the word out, he said. Donald Trump was Valle’s candidate four years ago and that support remains.

“He is America first,” he said. “I like his vision about securing the borders. The jobs, the economy—what he did with the Hispanics and African-Americans—we were doing good before the COVID.”

He added he supports the president’s stance on wearing or not wearing face masks, saying it’s a matter of freedom. Valle said he understands the novel coronavirus can be deadly for people with underlying health issues.

“But I feel like (Trump) is doing the best he can. He has all these companies working on vaccines, he followed Dr. Fauci—I feel he is doing everything he can,” he said.

Valle said he has a passion for history and planned to soon announce his bid for Culpeper Town Council in the 2021 election. Asked about support for Trump in the local Latino community, he said it’s mainly among the business owners.

“They say, ‘Trump has been good for me—no complaints,’” Valle said.

Getting tough on undocumented criminals in America is another aspect of the Trump campaign he supports: “Trump has a strategy—secure the border, get all the bad people out. And once he wins the election, he will work on that comprehensive immigration plan.”

Valle added of non-criminal, undocumented immigrants, “If you haven’t broken any laws, pay your taxes, you should not worry about it.”

He reflected on the divided state of the country and the last time it came together after 9-11. It motivated him to get involved in the democratic process.

“I am trying to do my part in the community,” Valle said. “I can stay home and watch the news and complain or let me do some good, work with my community, see what I can do to be a little more outspoken in support of the right people who can take our community, city, town, state, country in the right direction.”

Culpeper County resident Mae Dominguez-Morey, of Boston, Virginia, added her voice at the recent rally, remarks posted as video on social media. Latino children are raised to fear the “chancla” (translated flip flop) as a form of corporal punishment, she said at the rally.

The child of a Czechoslovakian mother and a Spanish father, she said her ancestors worked hard to achieve the American dream, including as coal miners in New Mexico, where Dominguez-Morey grew up: “There is no excuse in this country not to become something,” she said, expressing her love for her community. “I love people who are voting for Biden. I do because we can have differences and not attack each other.”

In a follow-up conversation on Tuesday, Dominguez-Morey said her aim in life is helping people. She is the mother of 10 children, including five she and her husband adopted. Five of her children are grown and served in the military.

Asked why she is supporting Trump for reelection, Dominguez-Morey answered, “I know a lot of people don’t like his personality and he probably should cut down on his tweets a little bit. But you don’t have to like a person to see they do good things.”

She said Trump’s policies have helped Hispanic small businesses and historically Black colleges and his policies seek to invest in low-income neighborhoods. The abortion issue is also huge for Dominguez-Morey.

“It just breaks my heart,” she said.

A group photo from Saturday’s rally in Yowell Meadow Park.

Event organizers say an estimated 80 people visited this past Saturday’s Latinos for Trump Rally in Culpeper.