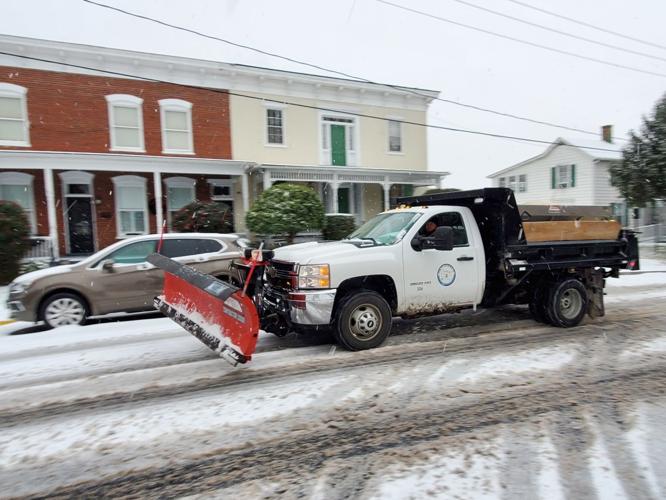 A plow moves along West Street in Culpeper as snow falls during a December 2020 storm. 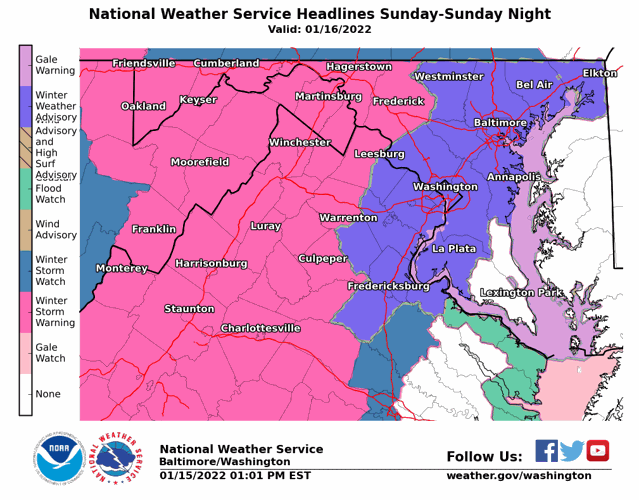 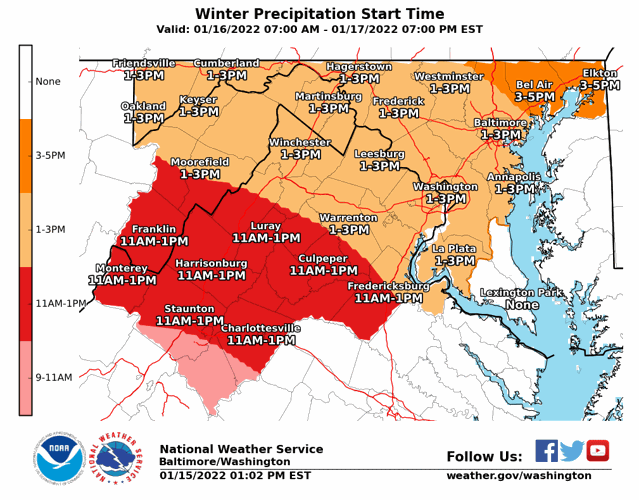 From Monterey to Culpeper to Fredericksburg, Sunday's snowstorm is expected to begin between 11 a.m. and 1 p.m., the Weather Service forecast Saturday afternoon. 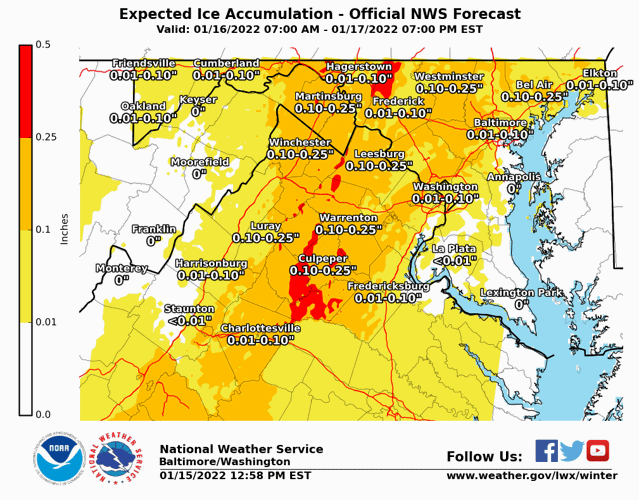 Winter storm Izzy will deposit one-tenth to a quarter inch of ice from Charlottesville to Leesburg, meteorologists said Saturday. 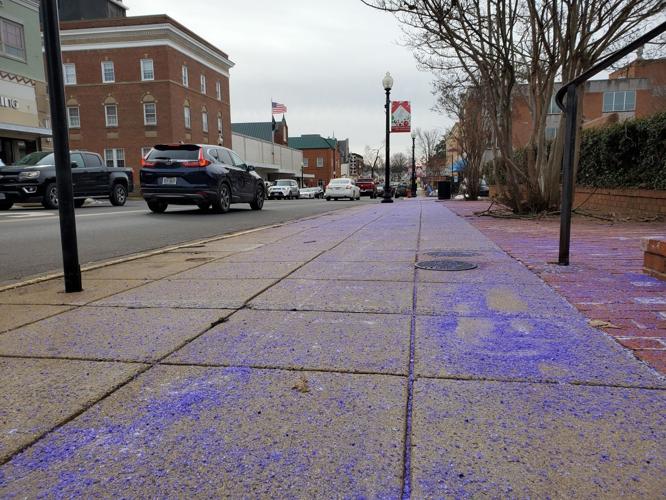 A sidewalk in Culpeper’s downtown, seen Saturday, has been treated in anticipation of the snow and sleet expected Sunday. 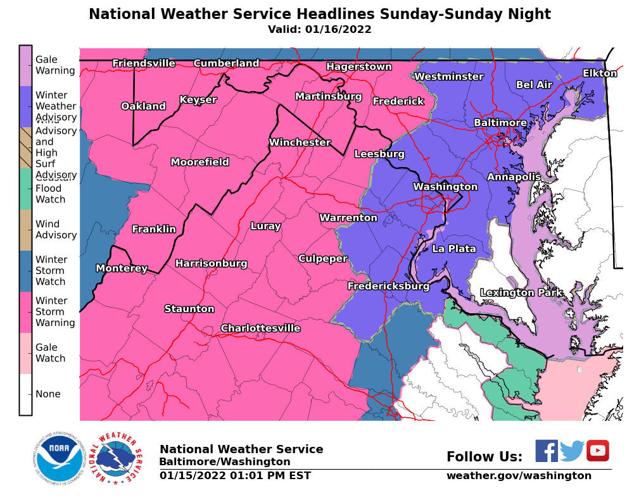 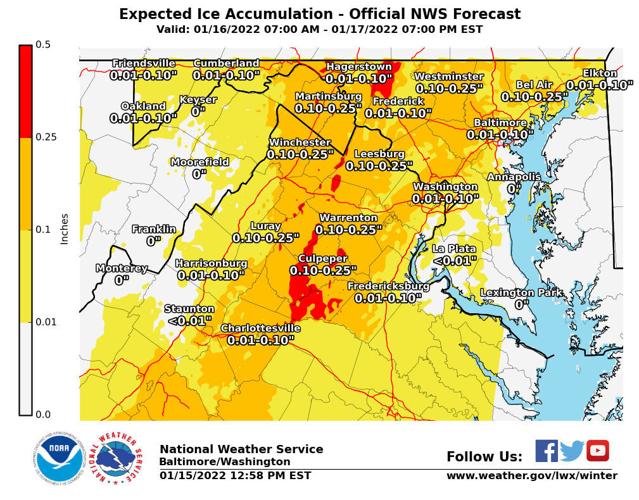 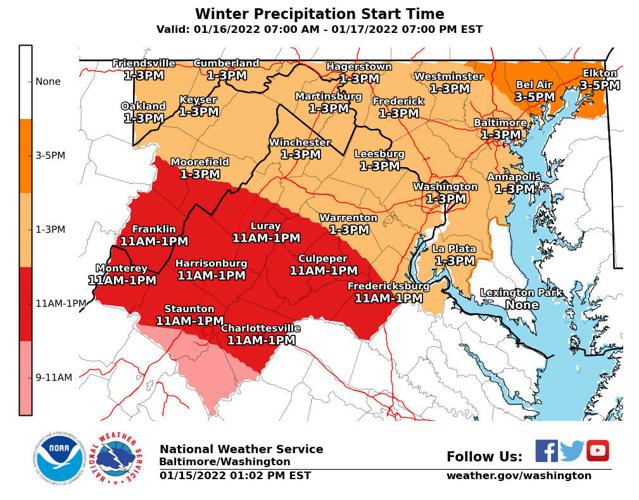 Winter precipitation is forecast to start in the Culpeper area between 11 a.m. and 1 p.m. Sunday, the Weather Service said.

A Winter Storm Watch is in effect from 10 a.m. Sunday until 7 p.m. Monday, and motorists are being advised to stay off area roads.

Izzy’s snow will change to ice, with snow accumulations of 3 to 6 inches and ice accumulations of one-tenth to three-tenths of an inch, the Weather Service said. Winds will gust as high as 35 mph. On Friday, forecasters had predicted 6 to 8 of snow from the storm.

For a time late Sunday, snow may fall at 1 to 3 inches per hour, making roads nearly impassable, the Weather Service said. Visibility may be reduced to a quarter mile or less at times.

Across from Central Virginia to north central Maryland, travel could be very difficult, with hazardous conditions hampering the Monday-morning commute, meteorologists said.

“When venturing outside, watch your first few steps taken on steps, sidewalks, and driveways, which could be icy and slippery, increasing your risk of a fall and injury,” the Weather Service cautioned.

Throughout Virginia, State Police are warning people to avoid travel during the Martin Luther King Jr. holiday weekend as the storm approaches the East Coast just days after a previous storm halted traffic on part of Interstate 95.

Virginia State Police said weather forecasts show all regions of Virginia will be affected by different kinds of precipitation. The storm is also expected to impact much of the East Coast, especially along the I-95 corridor, affecting people traveling out of the state or returning over the weekend.

State police are preparing for this latest round of winter weather and will have all available troopers on patrol to respond as quickly as possible to traffic crashes, emergencies and disabled motorists, the agency said.

State officials came under intense criticism after a winter storm the other week. Many motorists reported getting little assistance while they were stuck in gridlock on I-95, which according to officials began after a commercial vehicle jackknifed. With heavy, wet snow falling, more cars and trucks became disabled, further tying up traffic and preventing plowing. Traffic came to a standstill, leaving some travelers stranded for over 24 hours.

VDOT said that for this Sunday’s storm, it will have on hand more than 100 pieces of equipment dedicated to plowing and treating Interstate 95’s travel lanes, ramps, shoulders, bridges and overpasses. These trucks will repeatedly circulate over the nearly 50 miles of interstate that passes through Caroline, Spotsylvania and Stafford counties and the city of Fredericksburg.

Additionally, six heavy-duty towing crews will be located along I-95 in the Fredericksburg region, with two crews in each county. A team of 16 interstate monitors, deployed in rotating 12-hour shifts, will drive the interstate to quickly identify icing and hazardous road conditions, and report any crashes, disabled vehicles or other incidents that occur during the storm, VDOT said.

On Friday, then-Gov. Ralph Northam declared a state of emergency ahead of the storm, and urged Virginia residents to take the storm seriously and prepare ahead of time.

The declaration enabled emergency responders to get supplies and equipment where they expected to need them most before the storm hits.

The Virginia National Guard alerted personnel Friday for a possible storm response. The Guard plans to stage 60 soldiers along the Interstate 81 and Route 460 corridors. Additional personnel will provide support in the Richmond area.

Parts of Virginia are still dealing with power outages and debris removal after two winter storms the other week. This weekend’s storm is expected to bring more downed trees, outages, and difficult travel conditions, officials said.

On Friday and Thursday, VDOT crews were busy pre-treating Interstates 95, 66 and 64 and other major highways across the region with a brine solution that will help melt precipitation as it begins.

VDOT said its crews will report to work Sunday morning to finish preparing for the storm.

Once precipitation starts falling, VDOT snowplow operators and contract crews will treat roads with salt and sand to aid melting and improve traction. If snow accumulates to about two inches, the plows will push the snow off the roadways.

Crews will work around the clock to clear roads, starting with interstates and primary highways, then shift to secondary roads and neighborhoods once main roads are passable.

VDOT urges the public to complete preparations for the storm Friday and Saturday so motorists do not have to travel during the storm.

For those who must travel during winter weather, be prepared with essential items, including:

• Have at last a half tank of fuel in the vehicle

• Keep a blanket in the vehicle

• Keep winter clothing in the vehicle--a winter coat, heavy shoes or boots, gloves and a hat

• A snow shovel and a bag of sand or cat litter

Drivers who must be on the road during the storm should reduce speed, increase their following distance and use VDOT’s free 511 tools to learn about road conditions along their route, VDOT said.

contributed to this report.

Helen Marie Quarles, 65, of Locust Grove died at the scene of wreck last year on Route 3.

Spark Adventure Care, students’ concept for a childcare and development center in Culpeper, came out on top.

They made it. Despite a pandemic—and a fire alarm that forced the crowd of nearly 2,000 to evacuate University of Mary Washington’s Anderson C…

WHETHER it’s running, tennis, golf or something else, most middle-aged athletes devote their energies to one sport they excel in. Rob Hebb, 43…

A plow moves along West Street in Culpeper as snow falls during a December 2020 storm.

From Monterey to Culpeper to Fredericksburg, Sunday's snowstorm is expected to begin between 11 a.m. and 1 p.m., the Weather Service forecast Saturday afternoon.

Winter storm Izzy will deposit one-tenth to a quarter inch of ice from Charlottesville to Leesburg, meteorologists said Saturday.

A sidewalk in Culpeper’s downtown, seen Saturday, has been treated in anticipation of the snow and sleet expected Sunday.