Army Pfc. Kimberly Hernandez gives a high-five Monday, Aug. 30, to a girl evacuated from Kabul, Afghanistan, before boarding a bus after they arrived at Washington Dulles International Airport in Chantilly, Va. U.S. religious groups of many faiths are gearing up to assist thousands of incoming refugees. 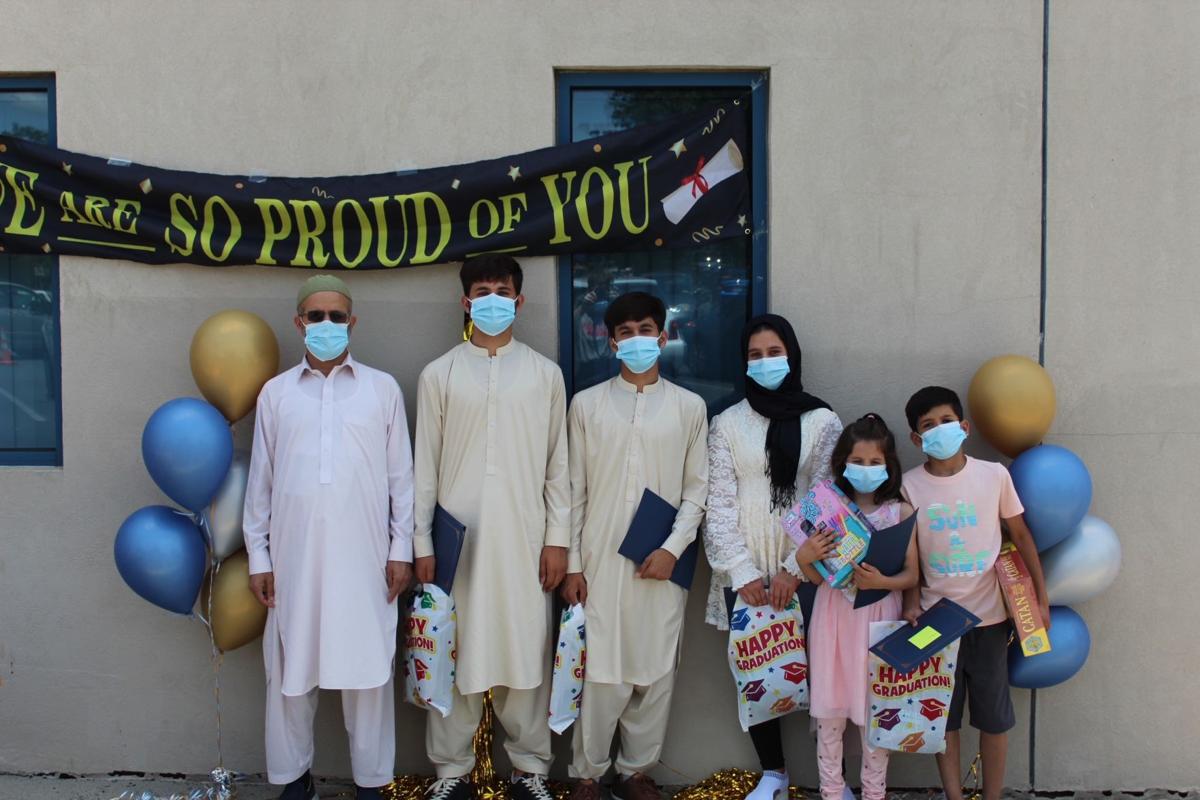 An Afghan man carries a girl as he and other refugees reach a processing center in Chantilly, Va., on Aug. 23 after arriving on a flight at Dulles International Airport. 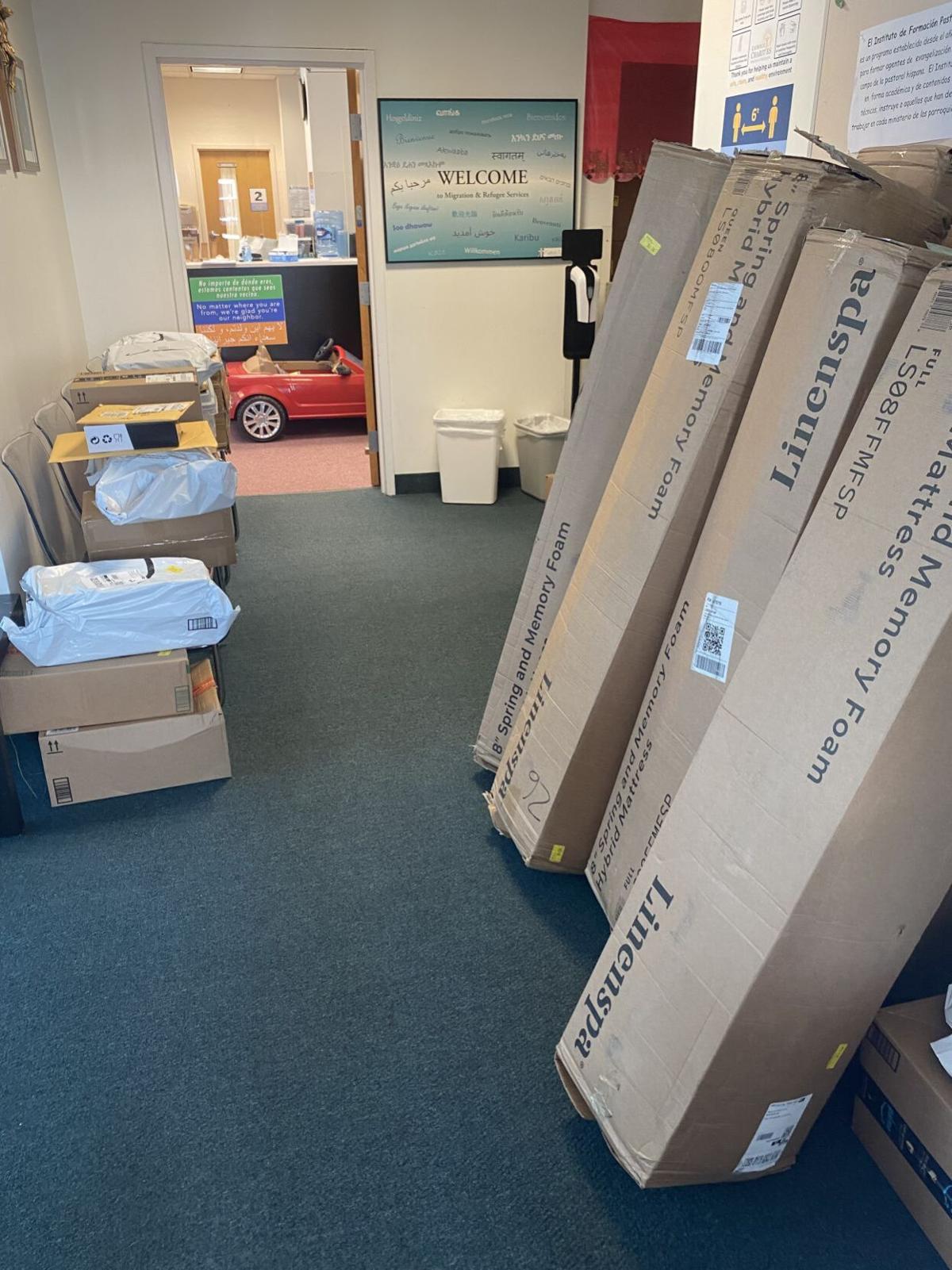 Recently donated goods stack up in a hallway at the Catholic Diocese of Arlington's Migration and Refugee Services. Americans have contributed to help Afghan refugees start new lives in the United States. 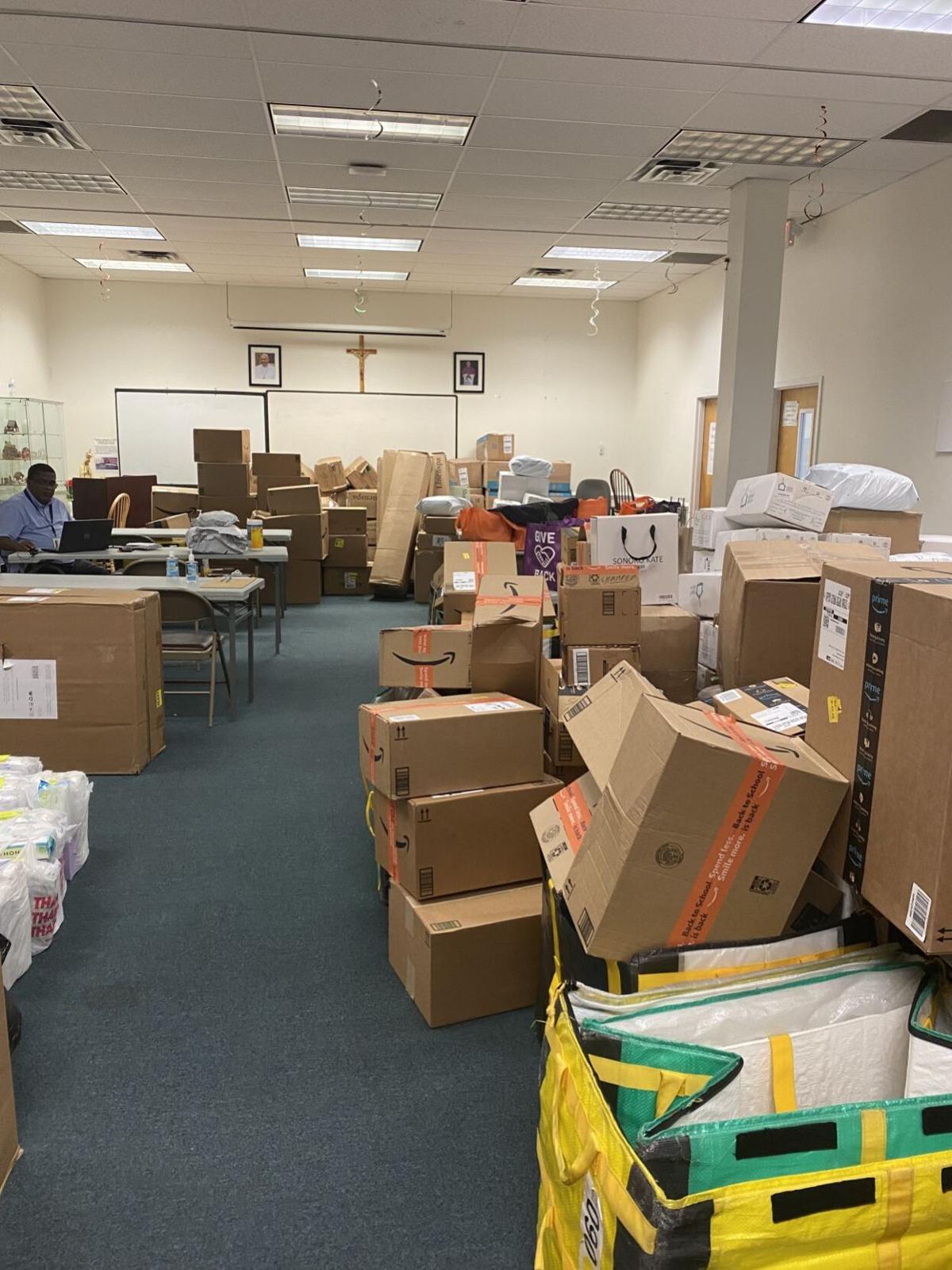 Household goods and furnishings given to help people resettle in the U.S. pile up in a workroom at the Catholic Diocese of Arlington. 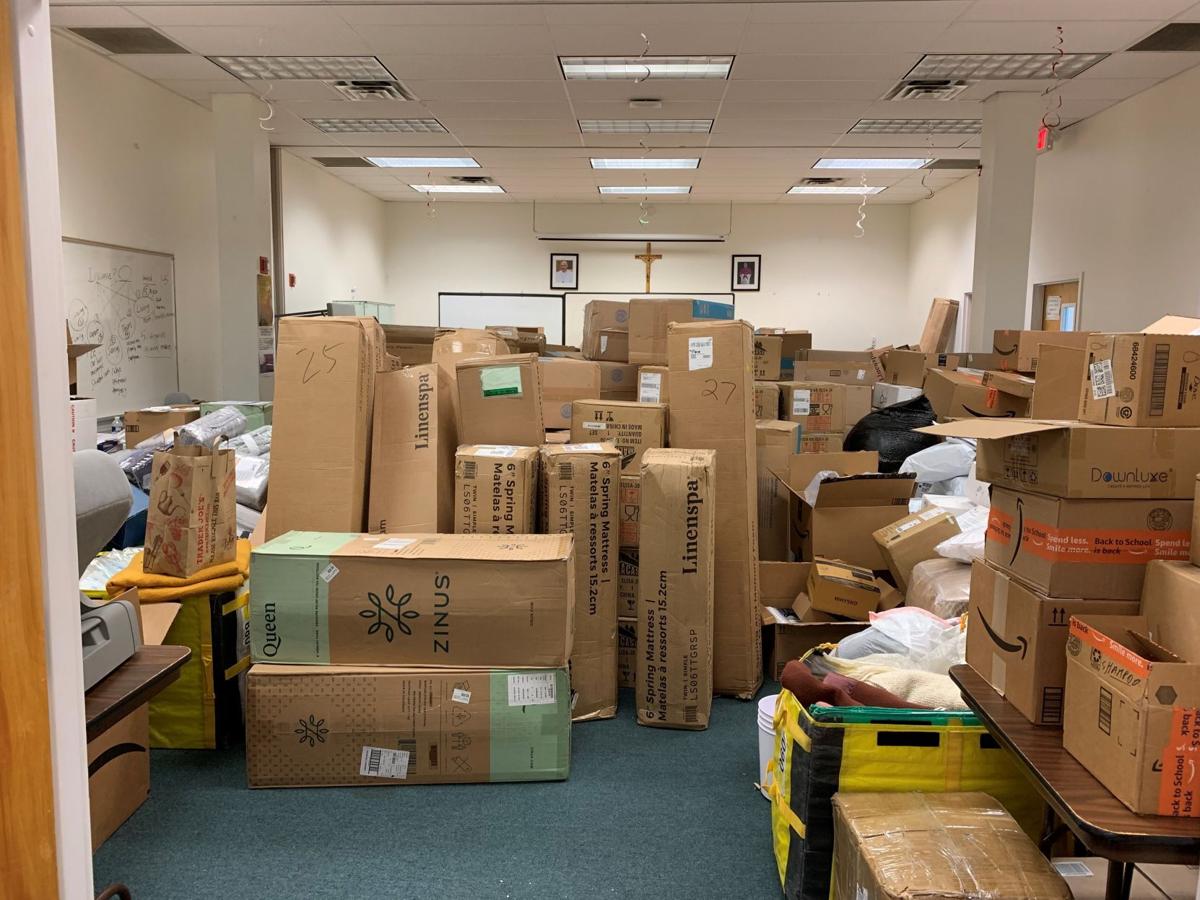 The Catholic Diocese of Arlington’s Migration and Refugee Services stores household goods and furnishings donated to help people resettle in the United States.

Northern Virginia’s largest resettlement effort is beavering away to shelter and care for American allies from Afghanistan in the wake of the Taliban’s takeover.

Catholic Charities of the Diocese of Arlington is helping process Afghan evacuees at Marine Corps Base Quantico in Prince William and Stafford counties and at Fort Lee, an Army post near Petersburg, Virginia. Quantico expected to receive 800 refugees and Fort Lee, 1,700, the U.S. Department of Homeland Security said.

“We are seeing an overwhelming outpouring of support from the community as individuals donate much-needed household items,” Diana Sims Snider, the diocese’s director of communications, said Friday. “In the past seven days alone, we have already sent truckloads out.”

At least 35 Afghans holding Special Immigrant Visas who came to Fort Lee last month are settling in the Diocese of Arlington, Snider said.

One of the 50 largest dioceses in the nation, the Arlington diocese includes 70 parishes across central and northern Virginia, including 444,000 Catholics and extending west to Strasburg in the Shenandoah Valley, south to Gordonsville and Spotsylvania, and east to Irvington.

As the crisis in Afghanistan has unfolded, the number of Afghan SIV holders served by Catholic Charities has dramatically increased, with more than 200 SIV-holders coming to the diocese’s Migration and Refugee Services in the last six to eight weeks, Snider said.

“They come here with just a bag or two; they have very little,” Snider said. “After finding them a place to live, we help them find employment.”

Still stuck in Afghanistan are thousands of people who worked for the U.S. Army or the government, and their family members, who were eligible for U.S. humanitarian visas, The New York Times reported Friday. “They know they are potential targets as the Taliban tighten their grip since taking over Kabul fully this week,” Times reporter Adam Nossiter wrote.

In August, Catholic Charities staff provided legal assistance, translation, children’s activities and other essential help to Afghan men, women and children at Fort Lee, Amber Roseboom, the diocese’s media-relations director, told the Star-Exponent Thursday. Many of these SIV-holders will travel on to destinations elsewhere in the United States to settle with family members already living in our country, she said.

Generally, SIVs are granted to eligible Afghan translators and interpreters who worked directly with the U.S. armed services or under the chief of mission at the U.S. Embassy in Kabul.

“We’re desperate to find property owners who are willing to accept these people,” Snider said. “So far, we mainly have been settling refugees in Fredericksburg, Dumfries, Stafford, Spotsylvania, Prince William County, Alexandria and Fairfax. We certainly would welcome housing in Culpeper County.”

For the first three months, the diocese pays refugees’ rent, Snider said. After that, the families are expected to pay the rent. The diocese can provide other supportive services up to five years.

Ninety percent of SIV-holders arriving in the U.S. find employment and are able to pay those bills after three months, Snider said.

“These are people who are highly motivated to find jobs, and they do,” she said. “With the job market now, everybody is looking for employees. These are folks who are willing to work and eager to provide for their families. These are people who were translators for American troops or worked for the government. At least one person (in the family) can speak English well; most other family members can speak some.”

The diocese appreciates donors who contribute household furnishings, and that is a needed service. But its most critical need is for people to rent to these families, Snider said.

People across the diocese have been very responsive, sending boxes and boxes of household items, including mattresses, car seats and blankets, she said. The diocese’s Migration and Refugee Services offers online suggestions, via a PDF, on how to help and also maintains an Amazon wish list of needed items.

“We’ve been flooded with generosity,” Snider said. “From throughout Northern Virginia and Central Virginia, people have contributed. We have had people as far away as California order things.”

So far this fiscal year, the diocese has resettled more than 368 SIV-holders, most of whom are from Afghanistan, she said.

This fiscal year, it has helped place 424 refugees, including SIV-holders, in jobs, she said.

Catholic Charities also helps refugee children enroll in school, and provides them with mentoring throughout the school year.

In the past six years, Catholic Charities of the Diocese of Arlington has welcomed more than 2,600 SIV-holders to Virginia.

The Migration and Refugee Services office has been part of Catholic Charities since the religious charity began, Snider said.

“We welcome refugees and other newcomers,” she said. “We help those from many countries.”

For several years, Catholic Charities has “been helping Afghan refugees to find housing and employment,” Snider said. “The number has picked up quite a bit this summer, and again since the Afghan government fell on Aug. 15.”

In addition to providing housing, Migration and Refugee Services offers English courses for those who need it, she said.

“We have a cultural integration class so they can learn the customs of our country,” Snider said. “We help with resumes, help them settle in. We do all we can to help them feel more comfortable and be able to settle here more easily.”

In a few weeks, the Arlington diocese will celebrate National Migration Week on Sept. 20-26, observed by the Catholic Church around the world every year, she noted.

“The timing this year is kind of interesting, to celebrate this just a few weeks after we’ve received an increase of refugees from Afghanistan,” Snider said.

The diocese will offer different programs every day. On Wednesday, Sept. 22, the program will discuss how parishes can welcome immigrants and refugees into their midst, Snider said. On the evening of Sept. 23, there will be a panel discussion on how people can volunteer to help with immigration, professional opportunities, and distribute winter clothing. That Friday, Sept. 24, there will be a job fair.

Some of the week’s events will be virtual. On Tuesday evening, a refugee simulation will enable participants to walk a mile in a refugee’s shoes, Snider said.

“They’re trying to understand the experience of being a refugee, leaving everything behind, starting a new life after leaving their homeland,” she said. “It’s really an eye-opening experience, and something anyone can tune into.”

Chosen by the pope, the theme of this year’s National Migration Week as observed by the Catholic Church is “Towards an Ever Wider ‘We’ “—an appeal to build a universal community where no one is excluded, the diocese’s website said.

Underwater Santa puts on a show at Seoul aquarium

Army Pfc. Kimberly Hernandez gives a high-five Monday, Aug. 30, to a girl evacuated from Kabul, Afghanistan, before boarding a bus after they arrived at Washington Dulles International Airport in Chantilly, Va. U.S. religious groups of many faiths are gearing up to assist thousands of incoming refugees.

An Afghan man carries a girl as he and other refugees reach a processing center in Chantilly, Va., on Aug. 23 after arriving on a flight at Dulles International Airport.

Recently donated goods stack up in a hallway at the Catholic Diocese of Arlington's Migration and Refugee Services. Americans have contributed to help Afghan refugees start new lives in the United States.

Household goods and furnishings given to help people resettle in the U.S. pile up in a workroom at the Catholic Diocese of Arlington.

The Catholic Diocese of Arlington’s Migration and Refugee Services stores household goods and furnishings donated to help people resettle in the United States.