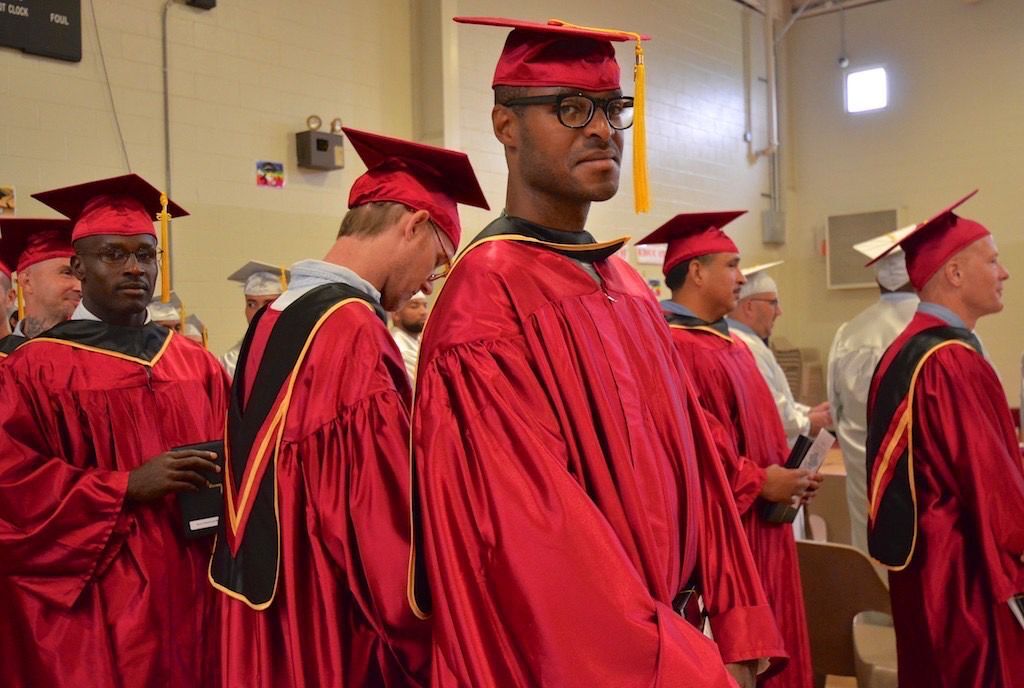 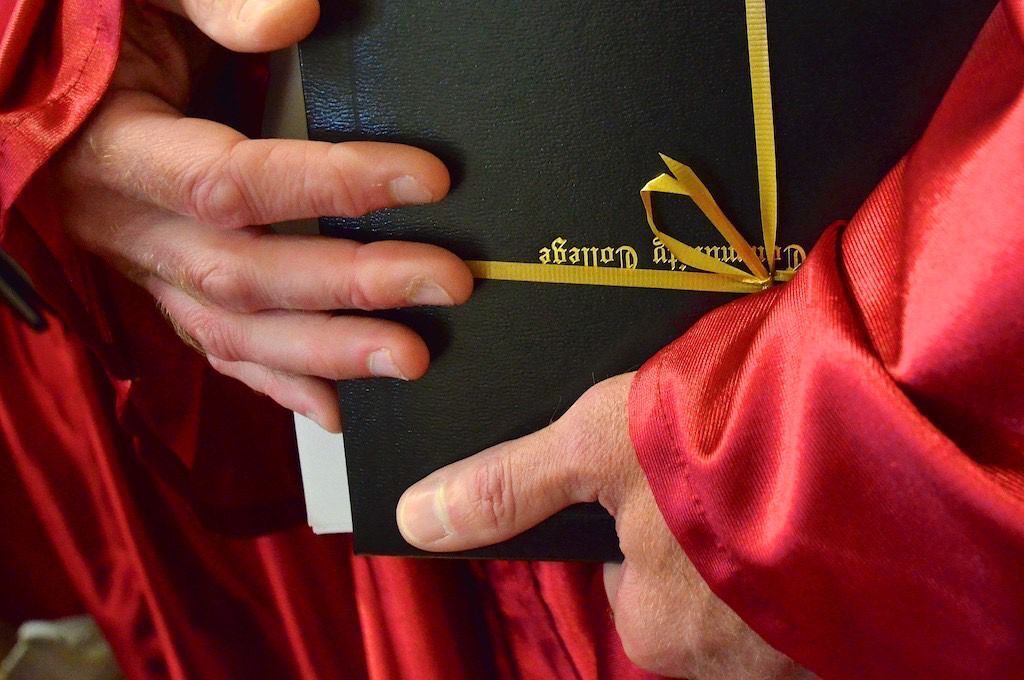 A student at Coffeewood holds his Germanna diploma. 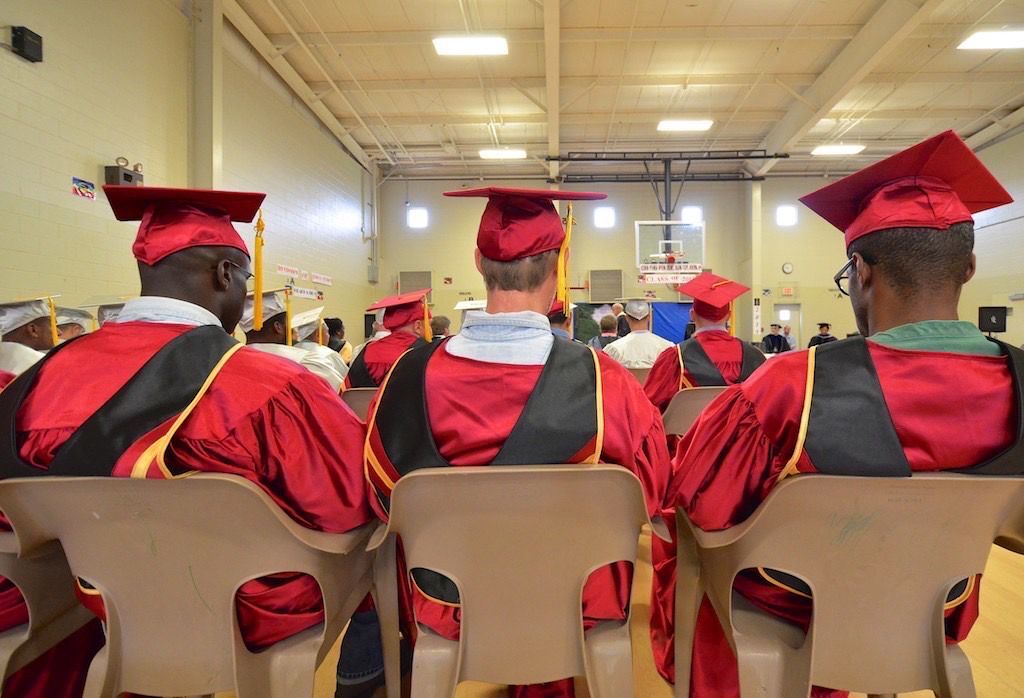 Inmates listen to a speaker during their graduation from Germanna Community College’s education program at Coffeewood Correctional Center in Culpeper. 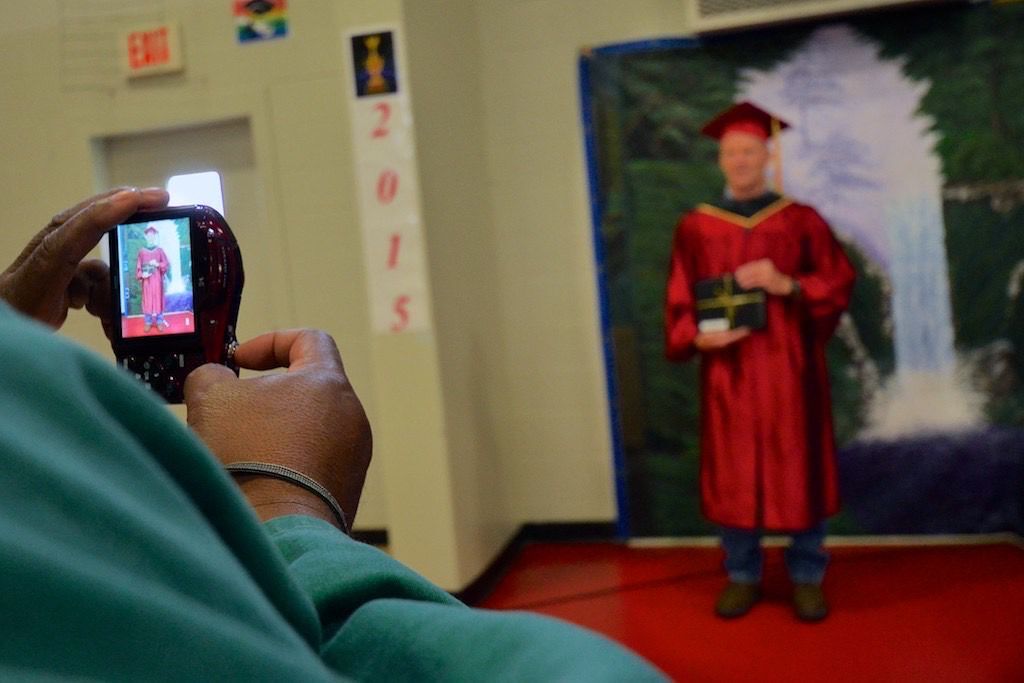 A student at Coffeewood poses for a snapshot with his Germanna Community College associate’s degree diploma.

Editor’s note: The late Virginia philanthropist Doris Buffett funded prison education at Coffeewood Correctional Center and a dozen other institutions. She was a pioneer in inmate education, which reduces recidivism.

I started teaching at Coffeewood Correctional Center in Culpeper County in 2009, my first year as an English instructor at Germanna Community College. The acting dean at the time needed a teacher and approached me in the halls of the college’s Locust Grove Campus in Orange County.

To be honest, the idea of going into a prison to teach scared me. I mean, who would choose to enter a prison? But the dean felt I would do well in the role. And some of my colleagues confirmed that teaching at Coffeewood was a joy.

I reluctantly accepted, and was quite nervous my first evening. But like my colleagues, I came to love teaching at Coffeewood.

The students taught me a lot about the human condition and our criminal justice system. They are not only imprisoned, they are also isolated. Driving out to Coffeewood, a medium-security facility with a capacity of 1,100 male inmates, it is easy to see how our throw-away society confines offenders and essentially forgets them.

When I told people I taught at a state prison, I often got a mixture of responses. Some thought it charitable, but others wondered why anyone would waste resources on convicted criminals.

I told people how impressed I was with Coffeewood students, how they came to class and did the readings, asked compelling and informed questions, and how they worked diligently to craft and edit their papers. They took pride in their work.

And yet I often heard people say, “Well, what else do they have to do?”

The truth is, the students had plenty of distractions. They lived in an open dorm with hundreds of other offenders. Every night, when I passed through the gates, I saw their fellow inmates lifting weights and playing basketball. Some of my Coffeewood students held jobs at the prison and had to balance the demands of their college classes with those earned responsibilities, all while navigating a strict power system.

In them, I saw a group of people who wanted to be respected for their ideas and their hard work—not be solely judged on their past actions. Each wanted to know that their voice and their mind still mattered in some way. And I’m not sure if most people in my position have been put in a place where they feel discarded and forgotten.

As I built trust with Coffeewood students, they often shared with me what crime they had committed, from repeat drug offenses to manslaughter. Some felt their punishments were unjust. Some openly admitted their wrongdoing, expressed remorse, but also struggled with where to go after that. I never thought of them as innocent. I knew they had hurt people and broken the law.

But after we acknowledge those facts, as a society, what do we do with them? In this country, we incarcerate more than 2 million people, and each one costs taxpayers more than $20,000 per year.

We have the highest per-capita incarceration rate of any nation in the world. And 50 percent of felons return to prison within three years of release.

Imprisonment alone is not a correction.

It wasn’t long after I started at Coffeewood that we found out that budgets were getting slashed. The economy was tumbling and politicians did not have an appetite to fund higher education for felons. The religious groups would still show up every night, providing scripture study and opportunities to worship, but the professors might not be able to return.

And yet, study after study shows that credentialing offenders, giving them access to pursue a degree, exponentially drops recidivism rates ... down to 14 percent if they earn an associate’s degree. For recidivism and opportunities for success, there’s a stark difference between a credentialed person and an uncredentialed person being released into society.

Religious declarations, for all the benefit they surely offer troubled souls, do not seem to have this same effect.

As my students often said, “there are a lot of Bibles left on top of the cooler”—a place where offenders leave things they no longer want or need when they are released. Investing in their education would mean they would likely not violate the law again, and we would not have to pay for their return to incarceration. They could be productive members of society.

Enter Virginia philanthropist Doris Buffett and her Sunshine Lady Foundation. I never met Doris, who lived in Fredericksburg, but what she funded and the structure her organization brought to the program changed people’s lives. I saw it with my own eyes.

Students were selected and moved through the program as a cohort. They helped one another succeed. They had to maintain good behavior, and their purpose at Coffeewood primarily focused on academic achievement.

I taught composition and developed a course on the literature of confinement. I always felt fortunate when I was assigned a course at Coffeewood, where I taught off and on from 2009 until the fall of 2019.

And all the students appreciated what Doris Buffett did for them.

Last year, I was walking through my local grocery store and a man kept glancing at me. It was one of those moments where we both recognized some familiarity in the other, but I could not figure out who he was.

After three passing glances, he asked, “Mr. MacLauchlin?” He was one of my best students from Coffeewood.

Here he was dressed in a suit, with a cart full of groceries. He told me how he now owned his own business and he was saving up to buy a home.

He is the author of “Butterfly in the Typewriter: The Tragic Life of John Kennedy Toole and the Remarkable Story of A Confederacy of Dunces.”

Tori Gelbert knew this school year would be unlike any other, due to the COVID-19 pandemic.

For folks on the ground, the sights and sounds lasted but a few minutes. Four World War II aircraft, one after the other, flew low over Culpep…

The Evolve Center held its fourth-annual "Trunk or Treat" event for Culpeper County youth on Saturday, Oct. 24 at the Culpeper Sports Complex.

NORFOLK—Elaine Luria and Abigail Spanberger were part of a historic wave of women who helped Democrats retake the U.S. House in 2018. And when…

In the 24 hours after the rivals’ only televised debate, spokesmen for Central Virginia’s dueling congressional candidates characterized their…

A student at Coffeewood holds his Germanna diploma.

Inmates listen to a speaker during their graduation from Germanna Community College’s education program at Coffeewood Correctional Center in Culpeper.

A student at Coffeewood poses for a snapshot with his Germanna Community College associate’s degree diploma.