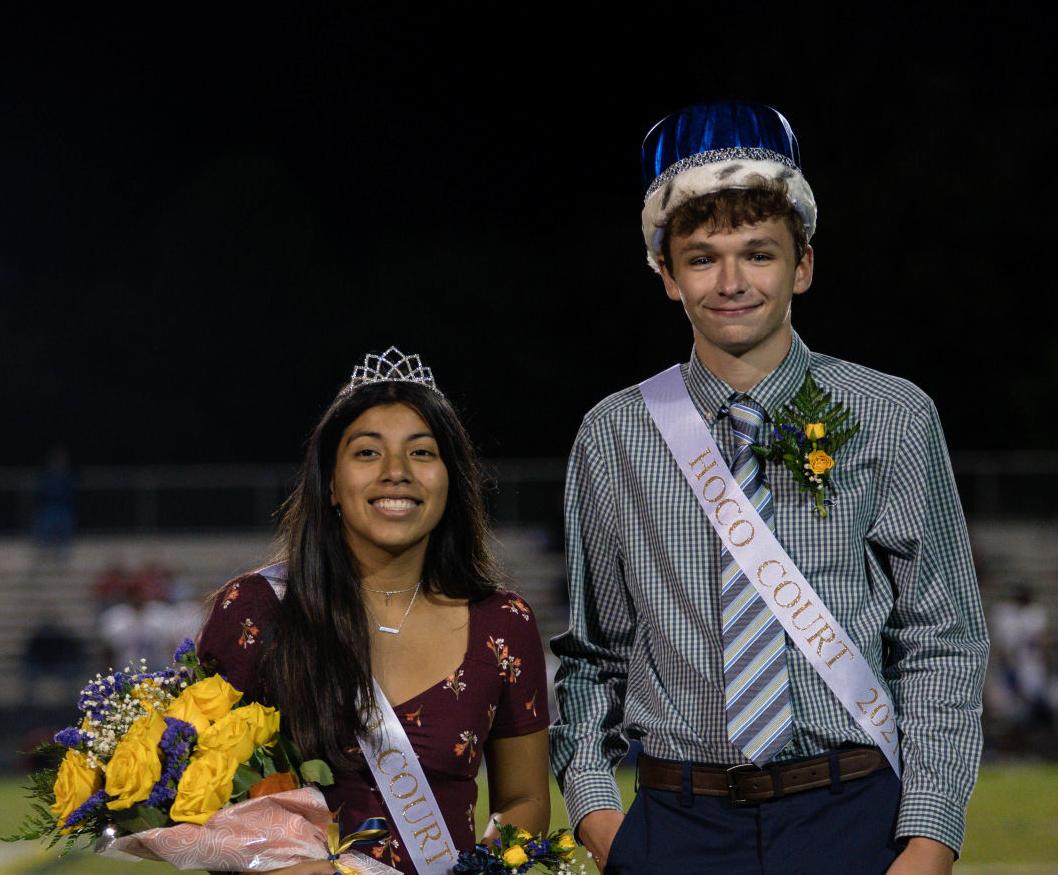 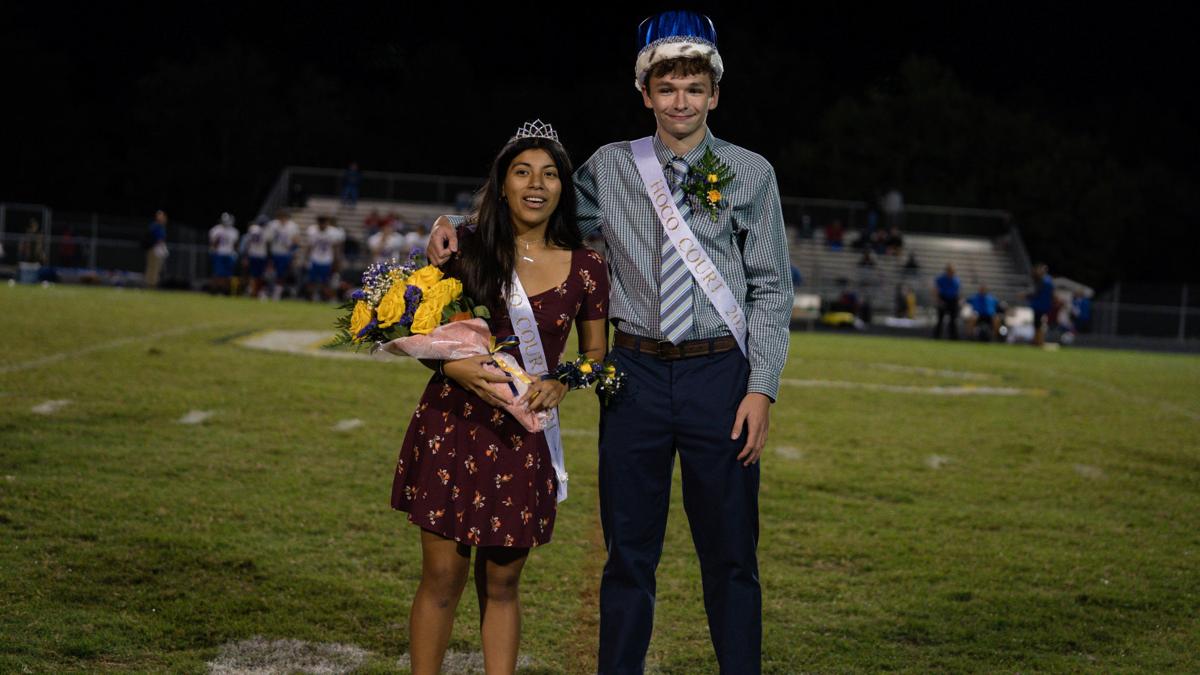 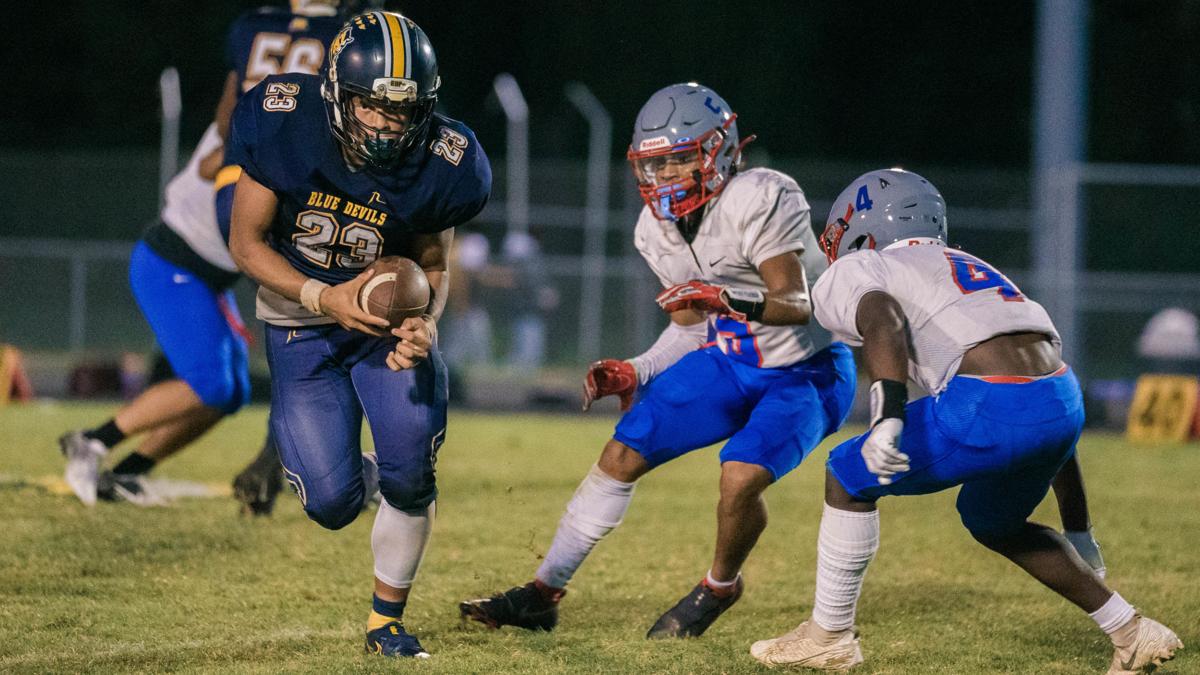 Culpeper County’s Malachi Terrell (23) runs for some of his 218 yards during the Blue Devils’ 22-0 victory over visiting Caroline at Broman Field on Friday, Sept. 24, 2021.

The COVID-19 pandemic has wreaked havoc on a lot of things in the last 18 months, and one of those was the homecoming festivities at high schools across Virginia during the 2020-21 school year.

With the Virginia High School League opting to postpone the 2020 football season to early 2021 and Gov. Ralph Northam setting limits on the amount of people allowed at public gatherings, most schools opted for smaller ceremonies or went the virtual route.

While both options ensured some degree of a homecoming experience for students, there was a sense that things just weren’t the same at Culpeper County High School.

Friday night, current and former Blue Devils alike got the taste of school spirit and camaraderie that they’ve been longing for for two years.

An enthusiastic crowd flocked to Broman Field for the big event. Prior to the game, coaches and members of Culpeper’s 1971 state champion cross country squad were announced as they presented the game ball to the officials on the field. The Blue Devils’ football team followed that up with a 22-0 victory over Caroline, which marks their first three-game winning streak since 2018.

Of course, all the pomp and circumstance occurred at halftime, when the 2021 Homecoming king and queen were announced. The honors went to Brady Allen and Maeghan Stockli, respectively.

“I never expected to win,” said a smiling Allen. “Since it was the first real homecoming in two years, one of my friends convinced me that I should go for it because we all took things like this for granted before the [pandemic].”

Allen said that while he’s still deciding on what college he’ll attend next year, he’s very sure of his direction.

“I want to attend a four-year college and get a bachelor’s degree and a master of science in engineering,” he said. “My dad was an engineer, and I’ve always been interested in going that route myself.”

Stockli’s reaction to being named homecoming queen was similar to Allen’s was at becoming king.

“When you think of something like homecoming king and queen, you usually expect a really outgoing person to win something like that,” she said. “I don’t really fit that mold because I consider myself reserved. I wouldn’t even have been in contention if my boyfriend hadn’t nominated me to begin with, so it was definitely a big surprise to win.

“It was definitely cool to win, especially having my mom out there by my side,” she continued. “She was super-excited for me and having her and the rest of my family and friends here with me is something I’ll never forget.”

Stockli, who plays lacrosse for CCHS, said she’d like to continue doing so in college. Eastern Mennonite and the University of Lynchburg have both expressed mutual interest in that area. However, she also pointed out that, should she opt to no longer play lacrosse and focus solely on academics, James Madison, Clemson and Georgia are on her radar.

“Wherever I go, I want to study sports management and sports communication,” she said. “I’m a huge hockey fan, so I’d really like to work for a professional hockey team one day.”

For more on the 50th anniversary of the 1971 Blue Devils’ cross country state championship, stay tuned to the Star-Exponent next week.

Watch Now: Are RoboCops coming to your police department?

Watch Now: Are RoboCops coming to your police department?

Come to the Crafts’ Meow Craft Show on Saturday, Oct. 30, from 9 a.m to 3 p.m. at Culpeper Christian School at 810 Old Rixeyville Road in Culp…

In many ways, Kaylin Hart was a typical 12-year-old girl: she enjoyed hanging out with friends, riding her bike and getting new shoes.

Culpeper County’s Malachi Terrell (23) runs for some of his 218 yards during the Blue Devils’ 22-0 victory over visiting Caroline at Broman Field on Friday, Sept. 24, 2021.