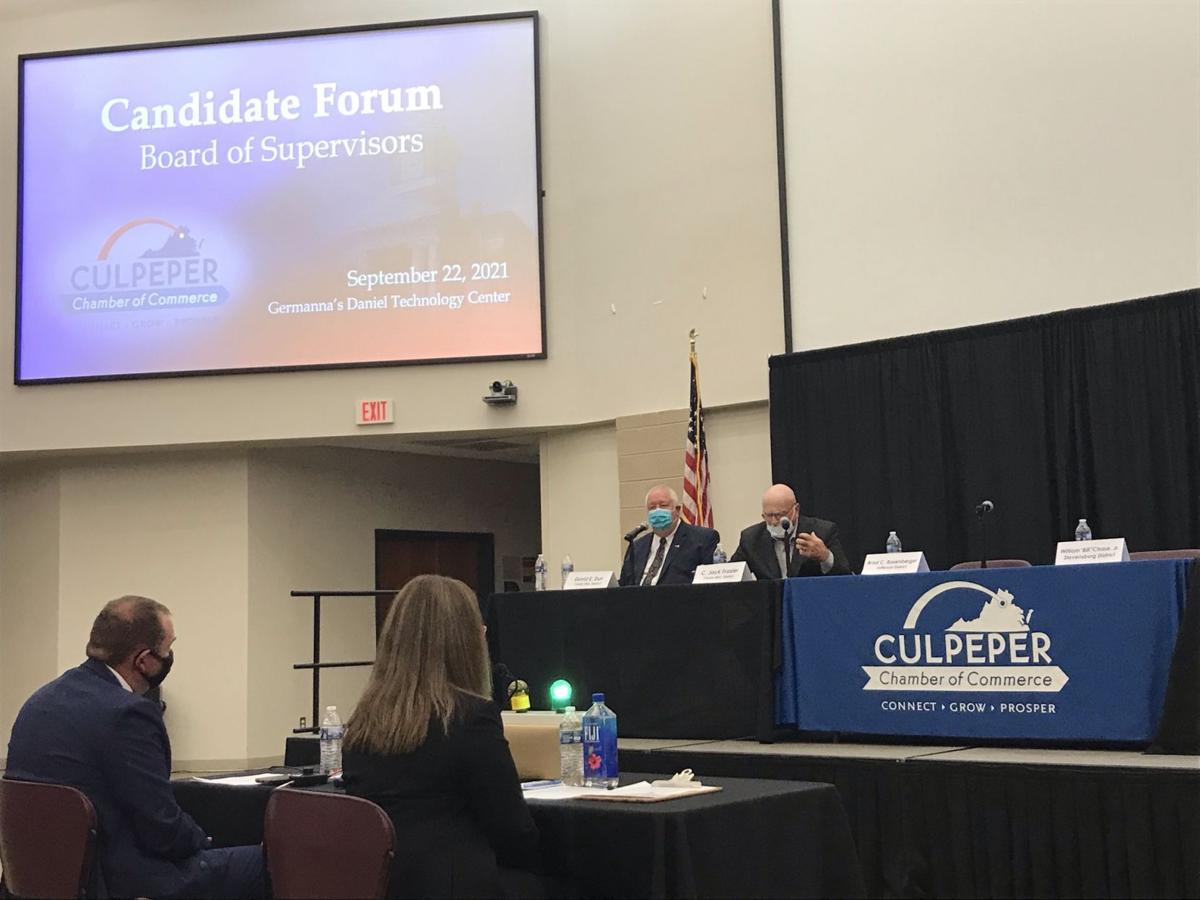 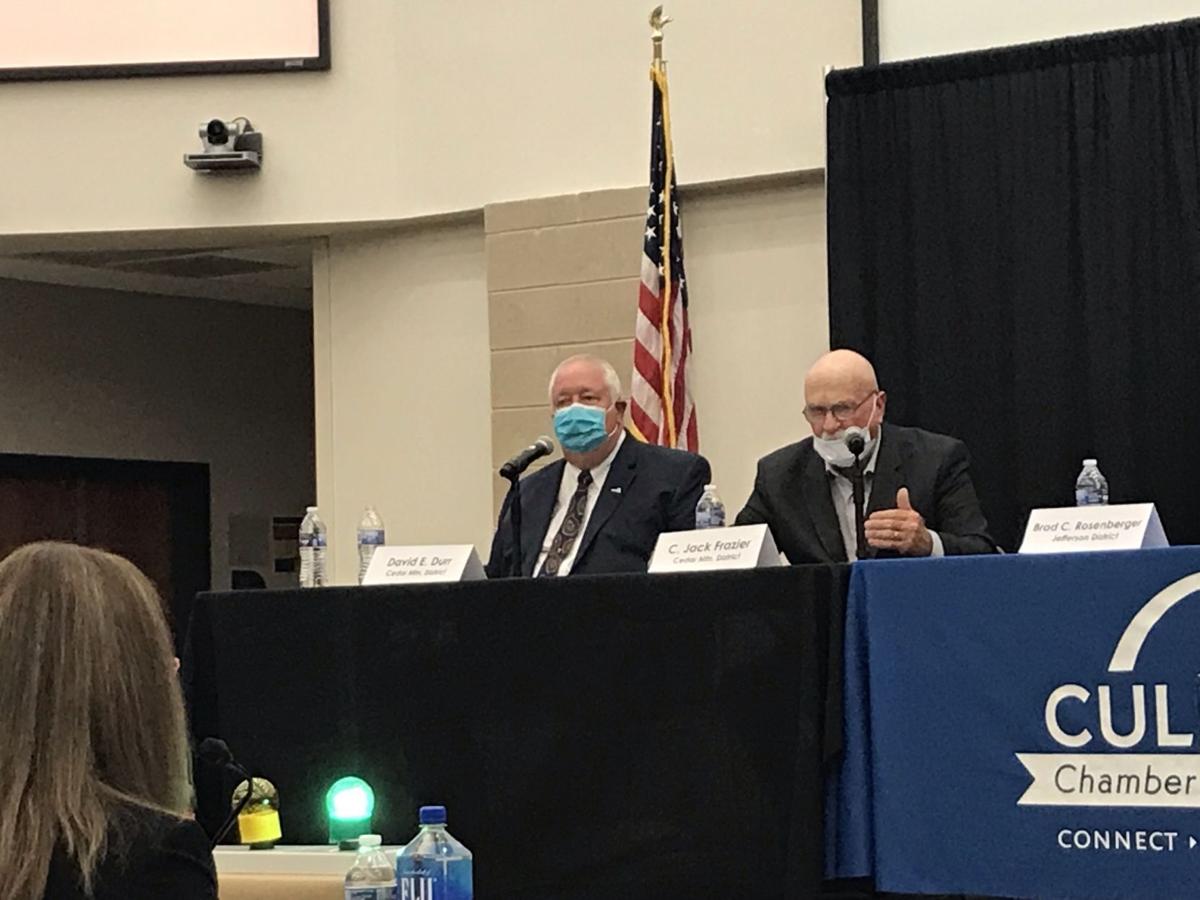 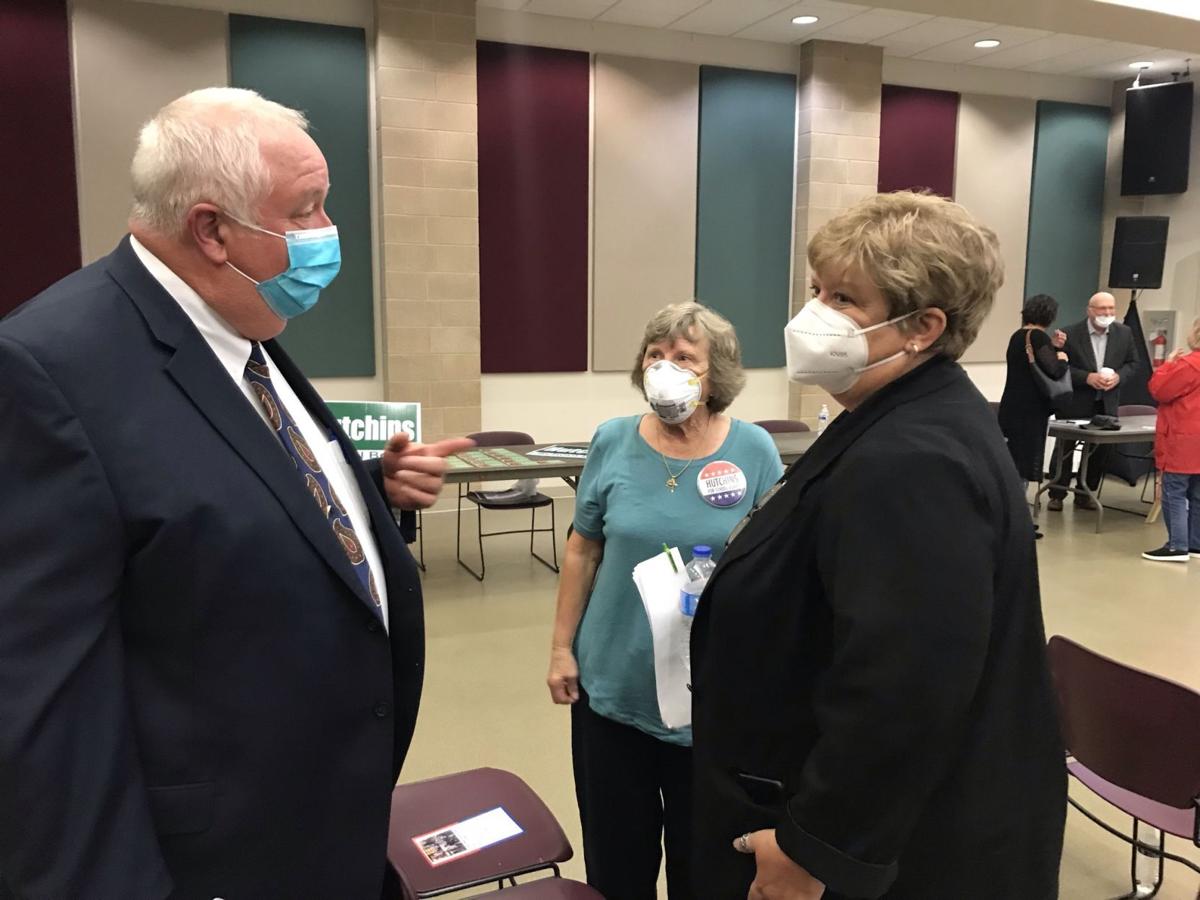 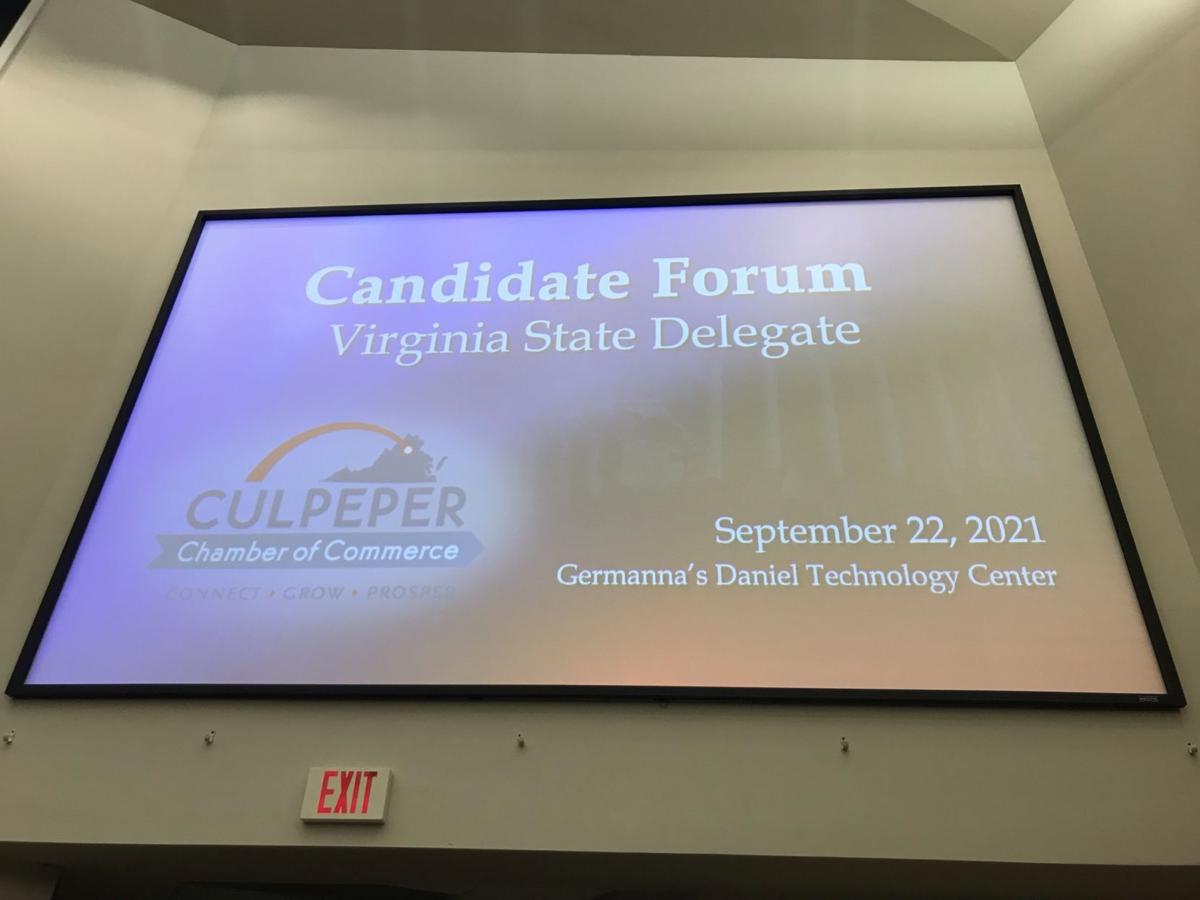 A slide heralds the Stevensburg District candidates' presentations during a Culpeper Chamber of Commerce election forum at Germanna Community College. 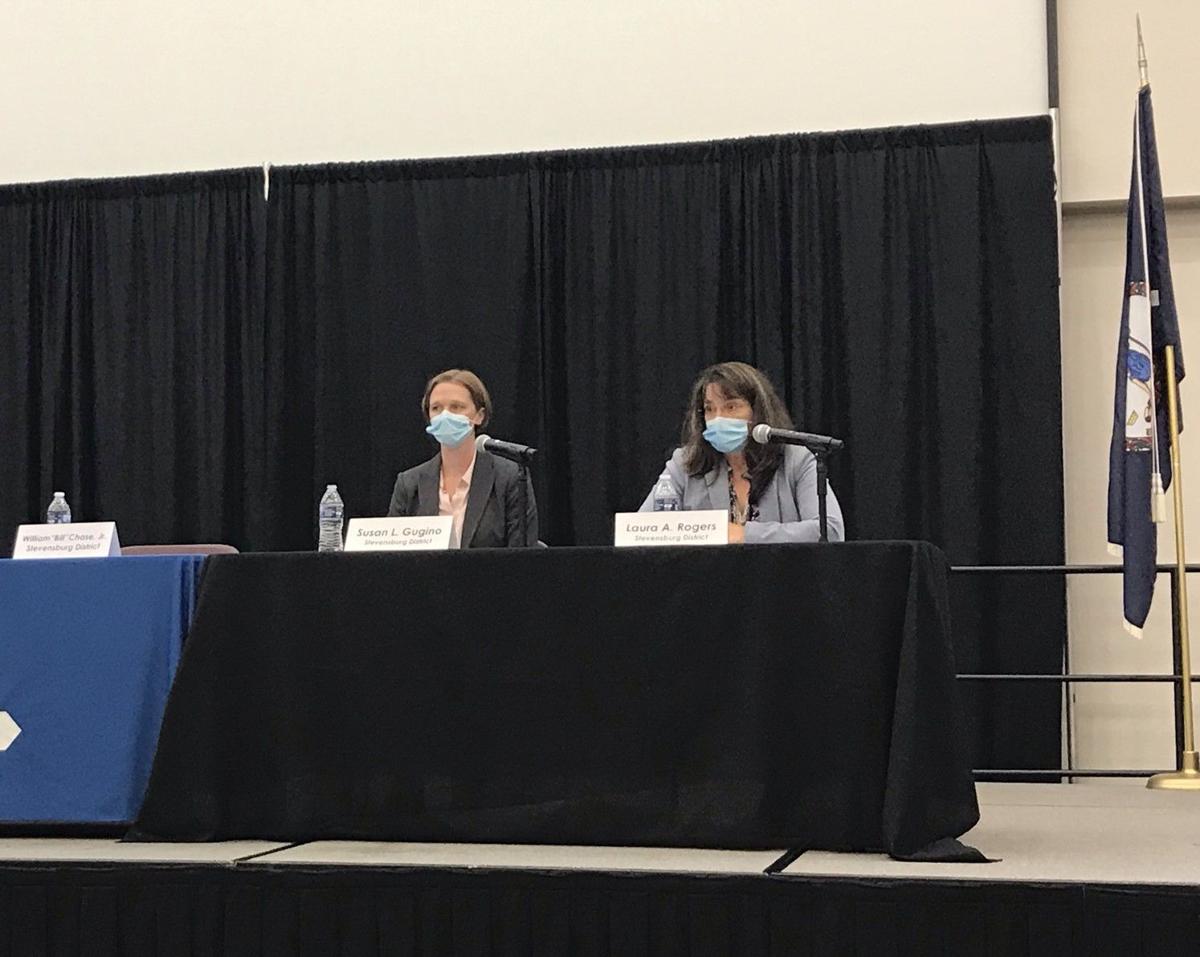 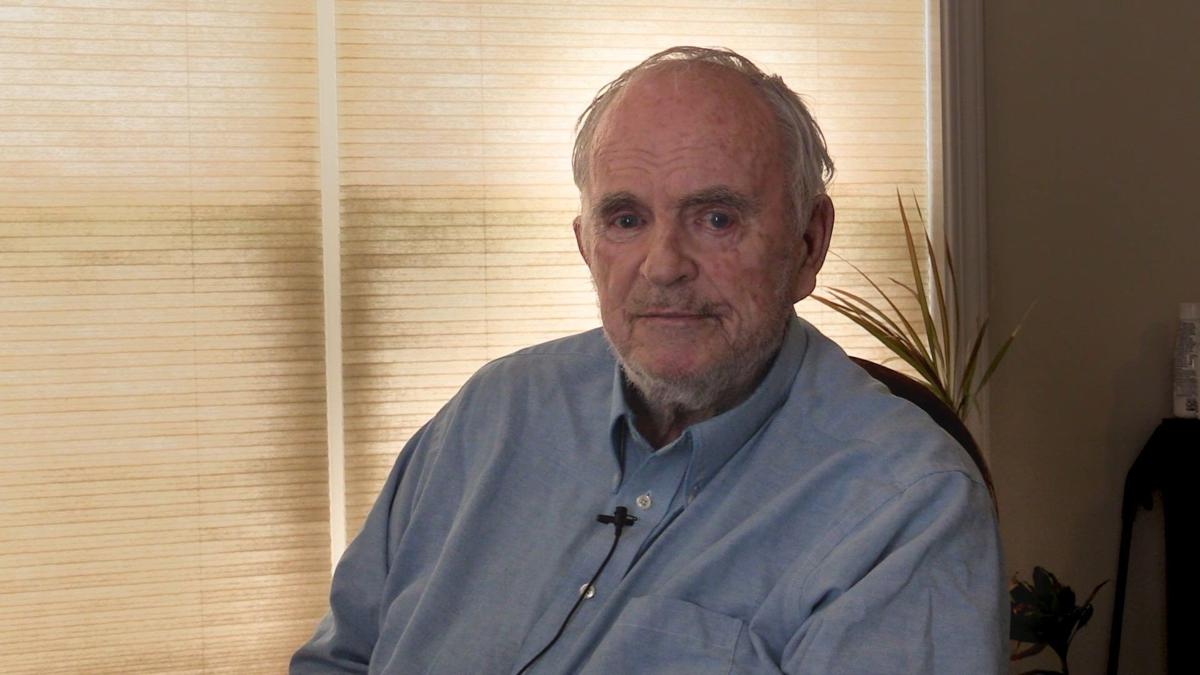 Stevensburg District Supervisor Bill Chase appears in a pre-taped video during one of the Culpeper Chamber of Commerce's election forums.

Candidates for three of Culpeper County’s Board of Supervisors seats explained their views on pressing local issues during one of the Culpeper Chamber of Commerce’s recent political forums.

Absent from the forum was Jefferson District Supervisor Brad Rosenberger, who has no opponent. He currently serves as vice-chair, and is running for his 10th term.

Running as an independent, Durr said he would work to preserve Culpeper’s farms, open space and country way of life. After decades in agricultural management, he managed the Culpeper Farmers’ Cooperative for 10 years, retiring in 2017.

Durr said he opposes greatly increasing the number of new homes permitted in the county, and would strive to ensure taxpayers aren’t saddled with additional costs.

He pledged to cut government waste if elected. On spending and taxes, he said he believes that “if you take care of the little pieces, the big pieces tend to follow.” Having spent his career managing farmer-owned cooperatives, Durr said he knows how to control expenses and cut waste.

Supervisor Frazier, a Republican, proudly noted that Culpeper has the lowest real-estate tax rate of any locality in the region.

“We must be doing something right,” he said.

Frazier said he has many problems with the solar development that proponents envision for Culpeper and the commonwealth.

The solar industry is “propped up by your tax dollars,” he said. Without tax credits, it would not exist.

Frazier expressed doubt that solar power will meet the targets set for it by Virginia’s clean-energy plan, saying the state could experience high prices and rolling blackouts, as had California.

“Our aces in the whole are natural gas and nuclear power,” he said.

Solar panels are made in China, he noted. “We don’t even know what they’re made of, but they’re going to put them in Virginia,” he said.

If elected, Durr said his top priorities would be managing taxes and shaping the county’s policy governing development of large-scale solar plants.

On solar, Culpeper faces opportunities that must be carefully evaluated. Land in Culpeper is in demand for solar power plants because it is close to Dominion’s transmission line, part of Virginia’s electrical grid.

He said Culpeper must weigh solar economics and carefully examine how solar development would impact the county’s scenic view-sheds and historically significant lands.

“These questions need to be answered, and answered completely,” he said. “If they can be answered satisfactorily and the problems can be solved, then I think we should move forward very slowly with some solar; I’ll call it, exploration.”

Frazier and Durr agreed that Culpeper must help bring high-speed access to the internet to more households across the county.

“The internet is a big deal,” Frazier said, adding that Culpeper supervisors and their staff have been working to secure grants that will connect more homes and widen broadband access. He noted that the county’s research has shown at least 4,100 residents lack broadband.

“Broadband is no longer a ‘nice to have,’ ” Durr said. “In today’s world, everyone’s got to have access to the internet for business. ... It’s very important. It’s time to stop making excuses, and get it done.”

He likened the situation to that of 100 years ago, when the federal government helped electrify rural America, something he noted the Rappahannock Electric Cooperative helped accomplish.

Frazier said one of Culpeper’s biggest problems is the state’s cuts in money for road maintenance. He ticked through a list of rural roads that he, as a supervisor, has helped to improve.

In the Stevensburg District race, some differences emerged between the three candidates, especially over solar development.

Laura Rogers, who serves on the Planning Commision, said one doesn’t have to be a farmer to appreciate what the agricultural industry brings to the community. Culpeper’s quality of life “is important to all of us no matter what part of the county you live in.”

If elected, Rogers said she would be the most knowledgeable person on the Board of Supervisors on solar-power issues. She noted she has been involved with the matter since it first surfaced in Culpeper.

Having out-of-state developers sell Culpeper solar-power projects to public utilities is not what supervisors envisioned when they crafted the county’s 2019 solar policy, she said.

Culpeper must protect its historic and rural character from large-scale solar development, she said.

“If we allow thousands of agricultural acres to be consumed by solar panels, that will become the dominant feature in our community,” she said. “That is one of the greatest issues facing the Stevensburg District.”

Rogers said she would work hard to balance the county’s budget, and has the energy and track record to do the job.

“I will be your voice,” she said, asking voters to let her bring her years of experience as a planning commissioner to the Board of Supervisors.

Gugino, the nominee of the Culpeper County Republican Committee, acknowledged that Culpeper’s tax rate is low, but said rising property assessments must be examined.

As the mother of a young daughter, Gugino said she wants to ensure Culpeper has the schools and roads it needs before the county develops further, and would plan accordingly.

Culpeper must work more adamantly with VDOT to ensure roads are maintained in the appropriate time frame, she said. Noting a recent news article that it will cost $30 million to fix Stevensburg Road, Gugino said “it should have been repaired many, many years ago.”

She said Culpeper’s comprehensive land-use plan must be updated, and that its transportation segment has been neglected.

“Solar is the big-ticket item in the Stevensburg District, but we can’t let that pull the wool over our eyes,” she said.

Gugino indicated she is wary of making Culpeper more “developer-friendly.” and fundamentally changing how the community works.

A former defense contractor with degrees in engineering and telecommunications, she said she has the experience to manage different projects, negotiate differences, bring people together and resolve underlying issues.

She said she would try to find ways to diversify the county’s revenue sources so there’s less impact on residents.

A member of Culpeper Business Women and Culpeper Quilters Guild, she has served as the chief election officer in Lignum and volunteers with the Seemer Farm Show.

“I have nothing to gain from being on the board,” she said. “I just want to ensure that my daughter grows up in the Culpeper I fell in love with.”

Noting that solar panels have an efficiency rate of only 11 to 15 percent, she said it would take solar farms “the size of five North Dakotas” to accomplish the nation’s ambitious clean-energy goals.

Gugino said she doesn’t want Culpeper to be at the forefront of solar development in Virginia.

An IT professional, Gugino runs a turkey and cattle farm with her husband off Mount Pony Road; it was named the 2020 Agribusiness of the Year by the Culpeper Chamber of Commerce.

On roads, Chase said the county has set aside road money for revenue sharing for years, but the Virginia Department of Transportation has eliminated road-maintenance funding for the past four to five years.

On development, he said Culpeper is trying to guide growth and the need for water and sewer pipelines to places where public utilities already exist.

“We’re trying to keep up with it,” he said about development, but acknowledged that it’s a problem.

On solar development, Chase said landowners should be able to make use of their property as they see fit, so long as it doesn’t affect the health and welfare of their neighbors. “It’s a big question whether the site devalues your home or not,” he said.

Chase said he’s always been reluctant to go into the county courthouse to get issues solved.

Instead, he said he directs residents to the right people, who can help them with their issue.

“The voters are my boss and the people I work for,” Chase said.

Watch Now: Trump goes to court to get his Twitter back

A slide heralds the Stevensburg District candidates' presentations during a Culpeper Chamber of Commerce election forum at Germanna Community College.

Stevensburg District Supervisor Bill Chase appears in a pre-taped video during one of the Culpeper Chamber of Commerce's election forums.