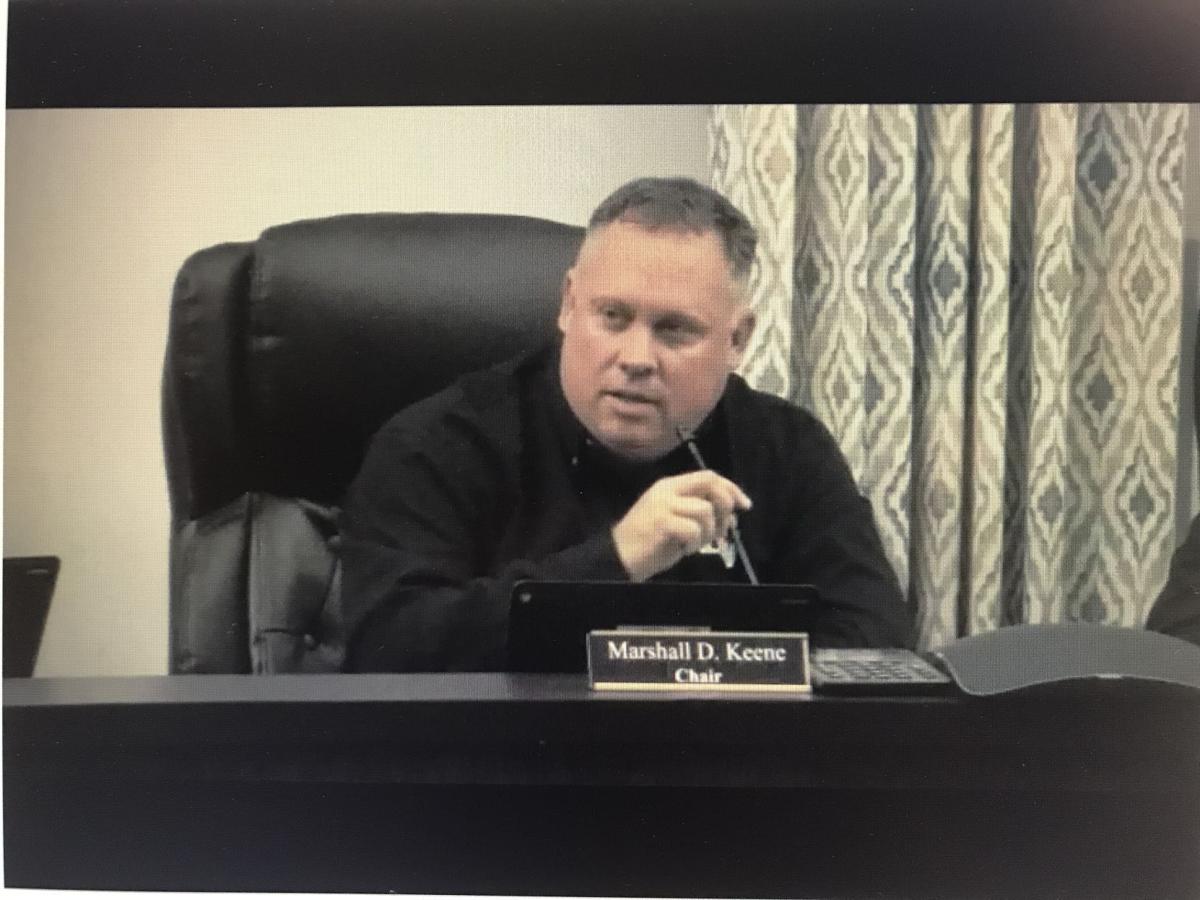 Culpeper County School Board Chair Marshall Keene addresses his fellow board members in closing remarks at their Monday-night meeting. 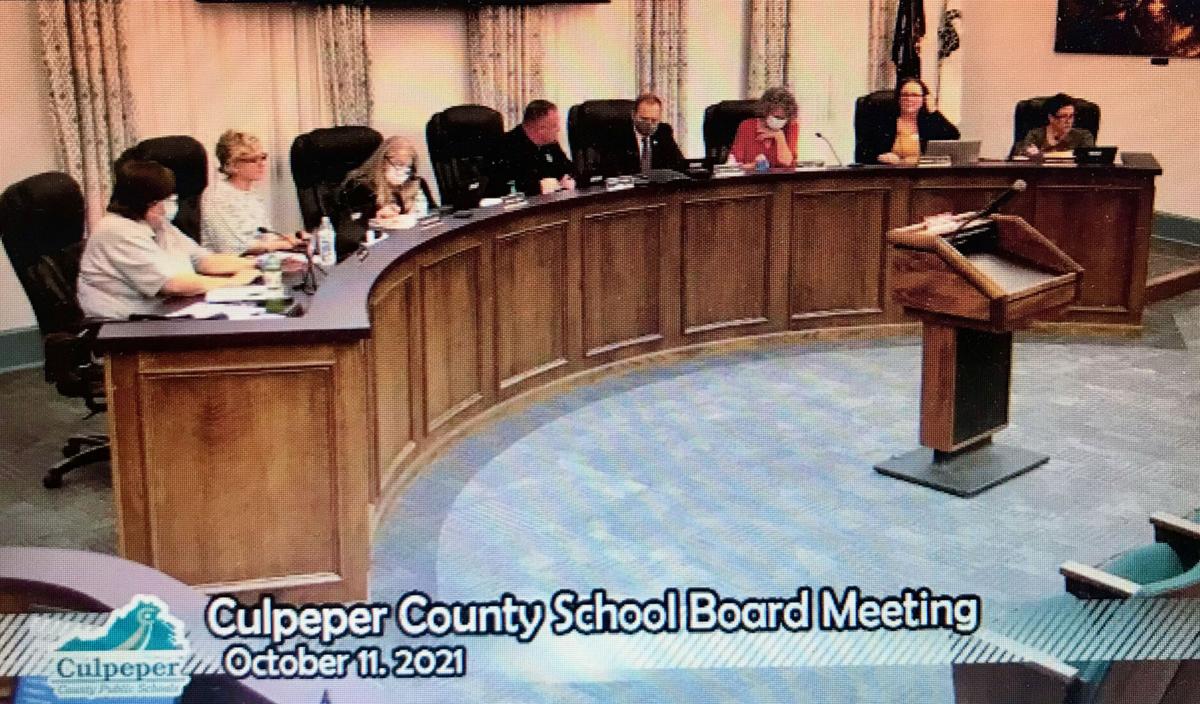 Making his statement the last item during the public portion of Monday night’s board meeting, televised on Culpeper Media Network, Keene defended himself against another board member’s questioning of his actions.

Keene used more than his allotted one minute of board-member comment time to do so, which didn’t permit any of his colleagues to respond. The meeting immediately moved into an executive session, closed to the public.

Off-camera, after Keene spoke, a board member told Keene that the School Board had not discussed Keene’s actions during its Sept. 13 closed session.

In his remarks, Keene said other School Board members may assert that for legal reasons, they can’t disclose what they said during a Sept. 13 closed session about Keene’s behavior. But that’s not so, he said. Keene said he’d sought private legal counsel on the question.

Keene spoke, expressing anger about a letter that board member Barbee Brown sent all of her colleagues, including Keene, citing examples of actions by Keene that she found troubling. Earlier, he shared selected excerpts of that letter on Sept. 8 with followers of his Facebook page, but did not name Brown as its author.

“I do not think it is in the best interest of our community for me to address Mr. Keene’s comments at the end of the School Board meeting,” she said. “Our community has plenty of issues to worry about outside of personal attacks on another School Board member by Mr. Keene. My concerns remain with our students’ education.”

Brown said she requested the board’s executive session in response to the public’s questions to her about Keene’s actions and statements.

On Monday, bringing into the public eye a dispute that largely had been kept off-view, Keene ticked off some of Brown’s examples. He scoffed as he quoted parts of her letter, saying people could ask for it via a Virginia Freedom of Information Act request.

Keene was incensed that the School Board, without naming him, included a discussion of her concerns on the agenda for its executive session on Monday, Sept. 13. The agenda didn’t name Keene, mentioning only “a specific public officer.”

The Stevensburg District board member, who did not attend the Sept. 13 board meeting, said he missed it to celebrate his wedding anniversary with his wife.

In an interview later in the week, former School Board member Michelle North said this was not the first time that Keene’s actions and statements prompted consideration of a closed-door School Board session.

After seeking advice from the school division’s legal counsel, North said she spoke with several board members to ascertain their interest in scheduling a closed session to address the issues directly with Keene.

One board member’s response was, “The board doesn’t have the time to deal with this now,” she said.

“Had the School Board chosen to have a closed session, it could have asked Mr. Keene to cease making statements that were concerning and inappropriate for an elected official, could have removed him from committee assignments, or decided to publicly sanction his behaviors,” North said. “The board chose to do nothing.”

On Monday, Keene went through points Brown made in her letter, as he had in his earlier Facebook posts.

Calling one criticism “laughable,” he denied criticizing any bus driver over delays as the 2020-21 school year began. Keene said he ate lunch during that troubled time with the school transportation staff, and that the staff has improved student-pickup times.

He acknowledged, addressing Brown’s letter, that he believes the Culpeper Star-Exponent is biased; recommended parents seek legal guidance on the governor’s COVID-19 mask mandate; shared publicly with parents his letter on how to request a face-mask exemption for a student; and thinks requiring School Board members to raise their hands to vote is juvenile.

“Yes, I posted a picture of a monkey doing it,” Keene posted on Facebook last month.

Michelle North, who resigned from the school board a year ago, explained this week that, as School Board chair, she instituted the roll-call vote requirement so the board’s recording secretary could accurately record its decisions when microphone problems and face-mask muffling made it difficult to hear board members.

Keene noted that he has only about two Monday-night board meetings to go before his term expires. Keene, who ran unsuccessfully in March for Culpeper County clerk of court, is not seeking re-election.

During his remarks Monday, Keene urged county residents to vote to elect conservative candidates to the School Board. Keene, who chairs the Culpeper County Republican Committee, is a critic of transgender-equity policies and of Critical Race Theory.

“If you’re watching in Culpeper, you need to vote conservative to make sure we’re not up here voting for transgender and/or CRT (Critical Race Theory) in our schools,” he said, directly addressing the board’s TV audience.

“Critical Race Theory is not a curriculum taught in Culpeper County Public Schools,” school division spokeswoman Laura Hoover said Thursday. “CRT is not part of any CCPS teacher training, and CRT is not the same as training staff about respecting the diverse experiences and viewpoints of all people in our community.”

In colleges and universities, Critical Race Theory is an academic framework for examining racial issues that some professors use in their classes. Generally, it is not taught in elementary, middle or high schools.

Here's how badly space affects the blood of astronauts

WH: Russia could 'at any point' attack Ukraine

WH: Russia could 'at any point' attack Ukraine

Insane base jumpers leap blind from cloudy cliff in Italy

Insane base jumpers leap blind from cloudy cliff in Italy

'It's coming directly towards us:' Eyewitnesses capture Florida tornado that left hundreds displaces

'It's coming directly towards us:' Eyewitnesses capture Florida tornado that left hundreds displaces

Culpeper County School Board Chair Marshall Keene addresses his fellow board members in closing remarks at their Monday-night meeting.